After all the attention this truck got in the classified section, I promised i'd post an update with pics.

The day i brought it home: 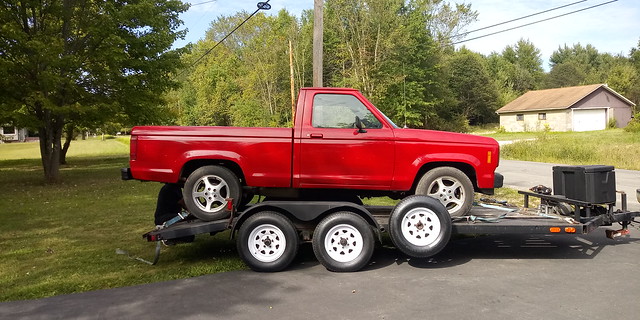 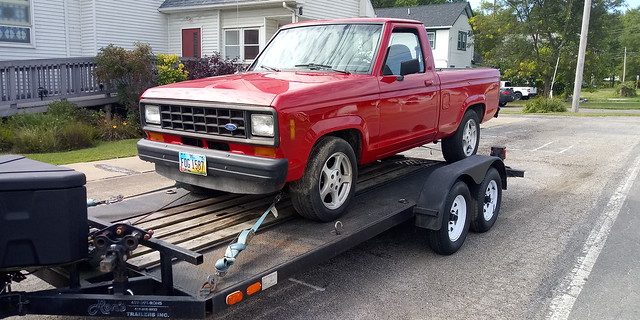 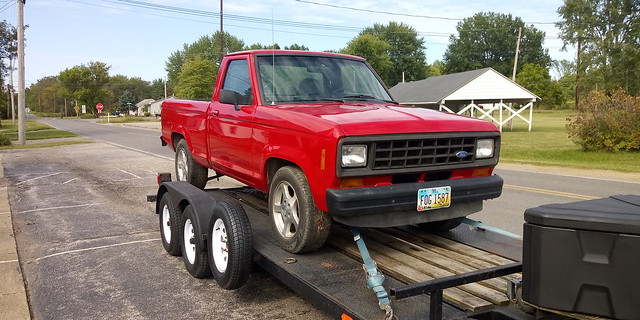 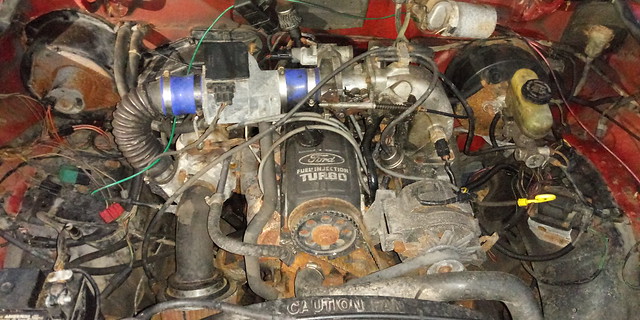 First impressions? It's a nice little truck. Body is nice and clean, the wheel wells and fenders are solid. Paint is so-so, it looks good from a distance but has many, many nicks, scratches etc. It hadn't run in about 3 years according to the seller, and our initial attempts to start it didn't get us anywhere. The battery was dead, but we tried a booster box a few times before it quit working as well. During this unsuccessful attempt, I didn't hear the fuel pump kick on, but didn't have a good way to test any further. So we winched it onto the trailer, and headed for home.

Got it home and tossed in a battery, then grabbed my multimeter. Even with a fresh battery, it wouldn't turn over at all, just buzzed the solenoid. I determined that the starter was shorted to ground somewhere inside the housing, and since this truck still had the old style starter (big, heavy, power hungry) i headed to the junkyard for a new style starter, and the wiring to go with it. 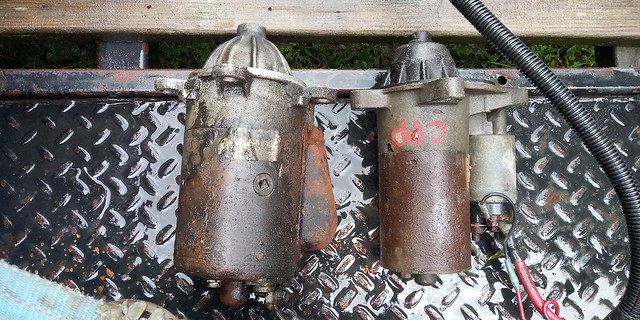 With the new starter installed, it would turn over without issues, but my initial hunch was correct. The fuel pump wasn't running, the relay wasn't even coming on. So, i popped the relay out, sent 12v right to the fuel pump and i could hear it running in the tank. Crank it over again, and after some spitting and sputting, it started up. It has awaken from it's 3 year slumber. A little more poking and prodding with a multimeter, and i've determined that the ECU is not grounding the fuel pump relay to run the pump. I've temporarily grounded the relay external to the ECU, so the fuel pump runs whenever the key is on. Actual issue is still TBD.
Last edited: Sep 15, 2019

So, after i got this thing running, i promptly took it out on the street to see what it could do. The engine was still shakey, it was surging and misfiring, and just didn't know what it was doing. The front shocks are blown out, it's got manual steering, and the brakes were crusted over from it's long-term storage. Honestly it was pretty unimpressive. It did make some smoke though, equal parts tire smoke (from one tire) and exhaust. A couple of pulls up and down the road keeping an eye on the already-installed boost gauge, it looked like about 14psi. That's a good number for these little engines, not over the top by any means but should make plenty of power. It just didn't feel like much though, maybe its because im used to something faster, but i have a suspicion something's not right in the cam timing or ignition timing. Unfortunately, there was no intercooler installed on this thing, a problem that I'd like to fix. Also, the vane air meter is installed inbetween the turbo and the intake, when it would have been installed pre-turbo from the factory. Some investigation shows that this is a real hodge-podge of parts. The block and transmission are as they would have been in an 87 ranger from the factory. The head, intake and exhaust are from an 85-86 thunderbird, or possibly xr4ti. It's got brown top injectors (35lbs) but has a small VAM. The computer is from an 87 turbocoupe (which would want feedback from a large VAM) and the turborcharger is from a 5cyl mercedes diesel. The big unknown, what rods and pistons? I don't have an answer for that question, though im really hoping theyre turbo coupe parts and not stock ranger bottom end. With the abuse I've already thrown at it, I'm not sure the stock ranger stuff would have held up.

A quick tour of the interior, we some interesting things. The seats, door panels and most of the plastic trim have been replaced with 2nd gen stuff. He must not have liked the red, but i can't really blame him. It stunk of mold/mildew pretty bad, it got the lysol treatment multiple times which helped, but didn't totally fix the issue. The first time it rained, i saw water on the floor on both sides. It's clear he thought he was chasing a windshield leak, judging by the sealant around every edge of the windshield. Unfortunately i think it's something worse. These 1st gen's have rather large cowl vents that let leaves and sticks down into the cown. Most likely culprit is rot where the junk has collected and held moisture. Someday ill find out, but it'll mostly be kept inside anyways. 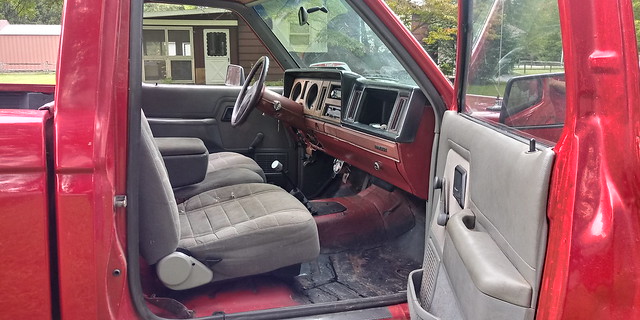 The truck also came with a couple of spare TFI's and the special installation tool. I found some loose wiring in that pigtail that i suspect was the cause of his aggravation. I've got it running for now, but may replace that pigtail at some point. Also included was a well-worn piston shift knob, mounted on a custom shift lever. Looks like a little weed-wacker piston or something similar, and you can tell it's seen some miles. Unfortunately this shifter is pretty sloppy, and the piston isn't especially comfortable. It'll probably have to go, and i'll have to figure out a way to tighten up the shifter. 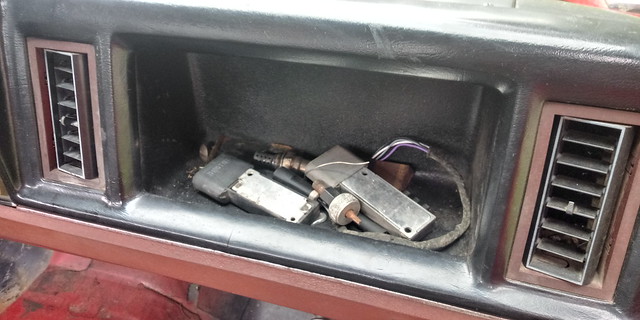 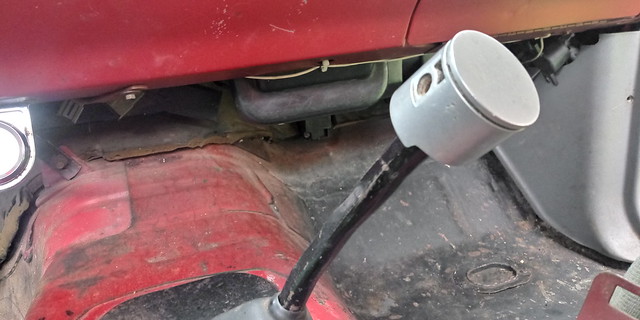 I think i found the source of the stink. There was more inside the dash and heater box, i vaccumed it out. Hopefully that helps haha 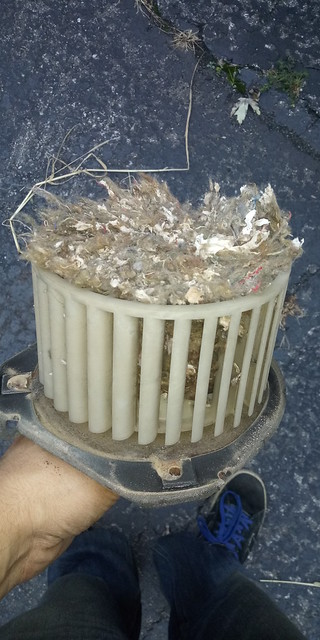 Spent some time trying to figure out if the cam timing and ignition timing are right. Cam timing may be off a few degrees. It looks like there's a pin that missing from the end of the cam that should align the cam gear. This was with #1 at TDC, you can see the whole in the cam at 6 o'clock, the cam is roughly where it should be. The yellow mark on the cam gear was made by the PO, im assuming after the cam gear had spun on the cam. The silver mark at the top right should actually be toward the bottom right where the yelllow mark is, and the keyway in the crank gear should be straight down. It's close enough it runs though, so I'm gonna leave it until i can pull the timing belt and fix it right. 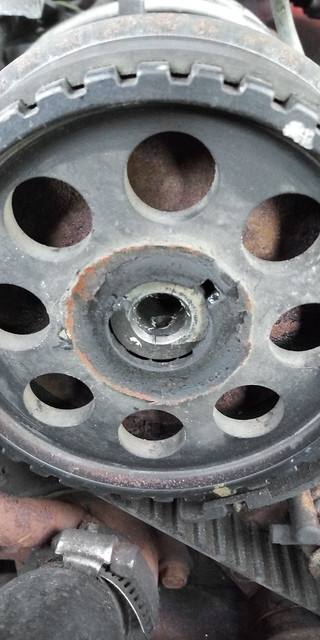 The ignition timing was off by quite a bit though. Spout out, ignition timing was about 8-10* after TDC Yes, after. That explains why it was so gutless but made so much boost. I put the timing back to 10* before TDC, and removed the manual boost controller so it'll only make about 8psi. It runs much better, has more torque down low and doesnt feel so gutless. In boost, it still feels pretty good. I think it's just as quick or quicker at 8psi with proper timing, than it was at 14psi before.

Finally, i pulled a spark plug and stuck a bore scope down into the cylinder. The results are not promising. While i'm not surprised, i am a little disapointed to see that it appears to still have the stock ranger pistons. The 2.3t pistons should have a large d-shaped dish in the top, not the 2 small notches for the valves. 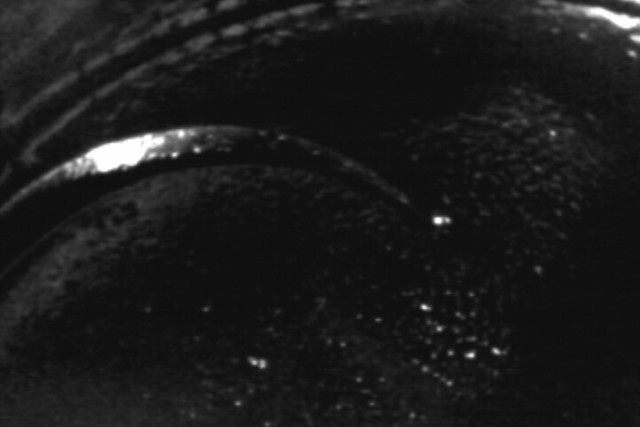 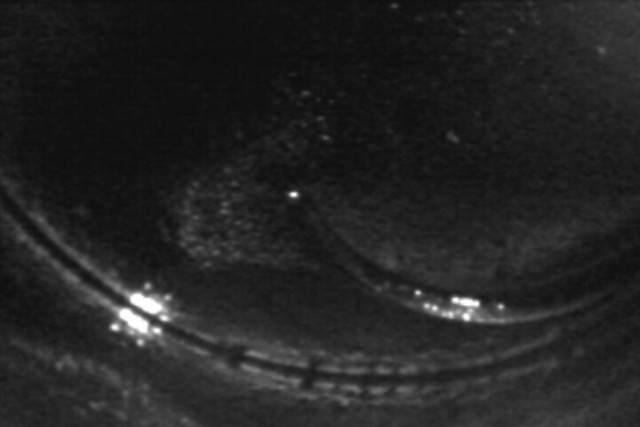 At this point, i'm on the fence about the future of the project. I could swap in some turbocoupe pistons, but i would still have an ECU i suspect is bad, a small VAM, a crumbling wire harness, no intercooler, etc. I could spend several hundred and still only have 250hp. I feel like my time and money might be better spent on a different powerplant.

I guess I should clarify, I'm not disappointed in the truck it's self. I bought it knowing that worst case, it was still nice sheet metal. I'm bummed because I have a turbocharged engine in front of me and I want to crank up the boost. I have no regrets, it's still an awesome start to a V8 swap, or maybe something else...

Currently weighing my options for the best bang for the buck, and there's a million choices rolling through my head

I don't think there is reason to be disappointed about the truck. It was worth the entry fee for the good it has... at least to me it would be.

I would still crank up the boost... after putting the right 2.3L together.


This could be your Ranger:

That's the beauty of this truck... you can do whatever your checking account can afford.


This could be your Ranger:

On an unrelated note, I suddenly feel the urge to lower this thing.

check the board for any obvious burned traces. might be an easy fix to get the pump running with a trace jump.


dont look like turbo pistons though. i would just drive it and eco or cyclone swap it later.

bobbywalter said:
check the board for any obvious burned traces. might be an easy fix to get the pump running with a trace jump.


dont look like turbo pistons though. i would just drive it and eco or cyclone swap it later.
Click to expand...

Thanks, Bobby. I'll open up the ECU this weekend if I have time.

Nothing obvious going on here... 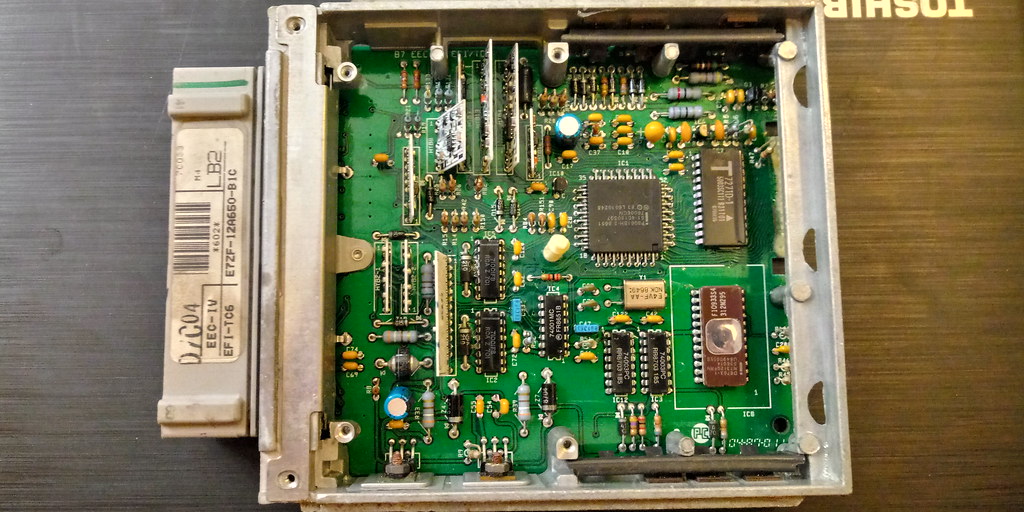 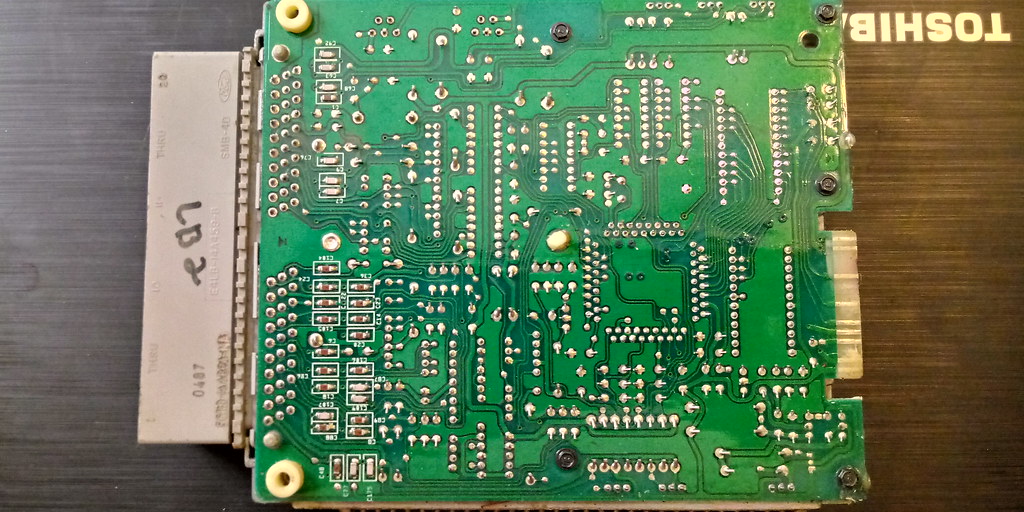