I learned when I did my floor pan that whatever steel Ford used to build cabs... ain't fun to weld patches in.

My chinesium replacement pan was thicker and easier to work with lol.

Roert42 said:
What are you using to weld on your body panels, MIG or TIG?
Click to expand...

MIG, with gas, .025 wire. I have a TIG welder but I'm not proficient enough with it to try something like this - maybe someday.

I learned when I did my floor pan that whatever steel Ford used to build cabs... ain't fun to weld patches in.

My chinesium replacement pan was thicker and easier to work with lol.
Click to expand...

Ha, yeah, agreed. The irony here is that I'm using a piece of a 70's Lincoln hood that I found in the woods for patch material! That hood provided me with a lot of nice flat material over the years.

I'll second the difficulty in welding these cabs; the metal is crazy thin. I pulled a few dents in my cab right behind the door and the studs would just tear a hole in the steel when using the slide hammer, it was super frustrating. And then welding up the hole with my mig required adding some small pieces of steel behind the panel so that the hole would stop getting bigger. Like welding a piece of paper.

Eddo Rogue said:
Make it a lowrider.
Click to expand...

The "High rider" package is really nothing special, it isn't really a "lift kit"but it is a bit more than a "leveling kit" it was actually a zero cost option add on to an STX package truck

Had a 50+ degree day yesterday so I took advantage and did a bunch of sanding outside. The roof is mostly done and I started on the B pillars as well. I found some surprises - namely, 10 layers of paint and more holes in the roof. I am pretty sure this truck had a visor on it at one point, which caused the big rust hole... there are 5 screw holes on the other side in the same spot, although not rusted through that I can see, thank god. I think it also had lights or something attached to the roof as well - two more pairs of holes on both sides. This was all covered up by a very thick layer of bondo. There was also a lot of surface rust under the first layer of primer - I think somebody used the old "paint sticks better to rust" theory.

Fortunately the back wall of the cab and and the door jambs don't have that much paint so it will be easier going. I may just scuff these and prime. I probably wouldn't have gone to the extreme of taking the roof and pillars down to bare metal but I was having chemical reaction issues with the passenger door and did that with it, and I'm kinda glad I did it on the roof too so that I found the holes and have a chance to fix them now. 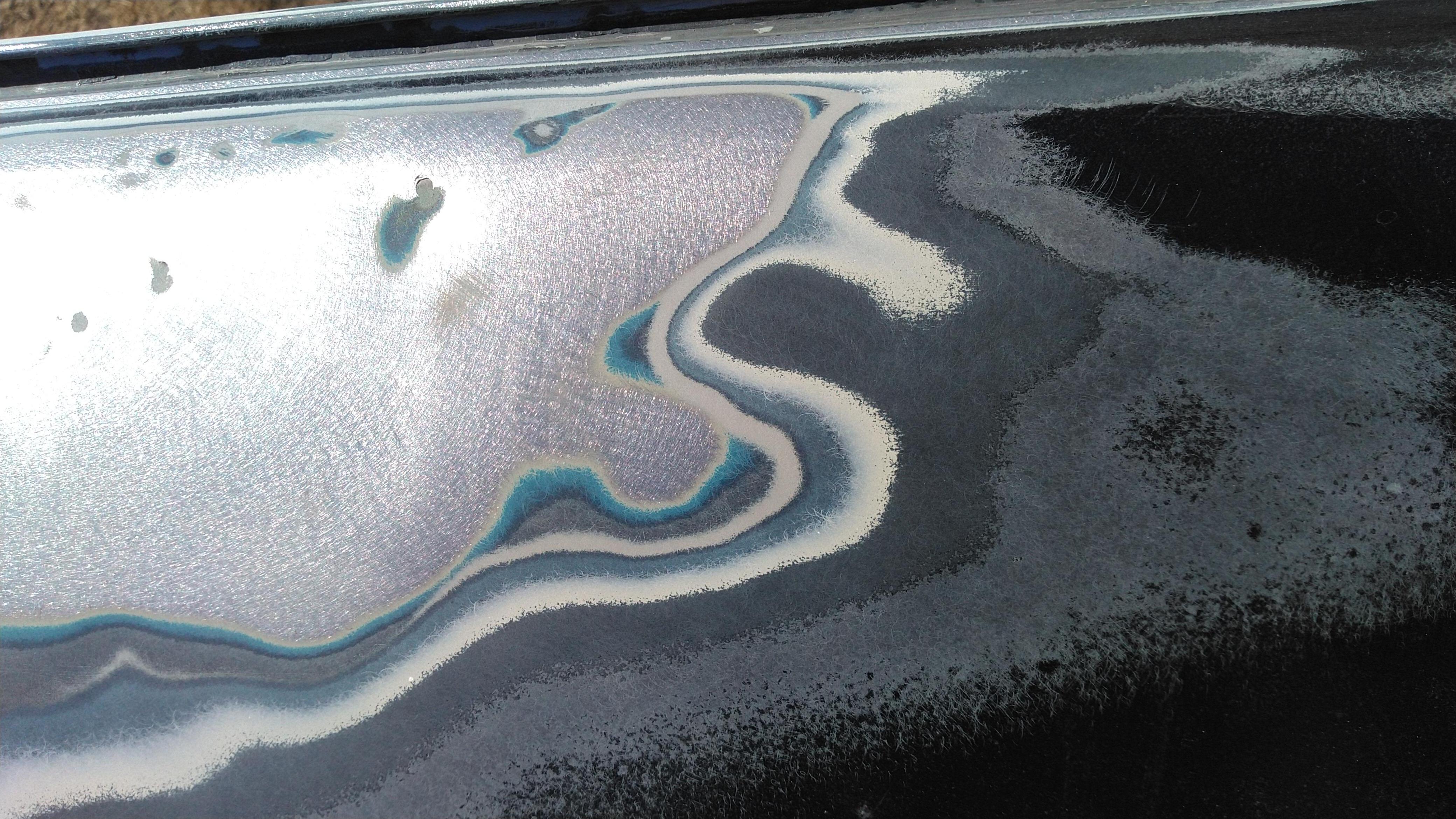 And surface rust underneath 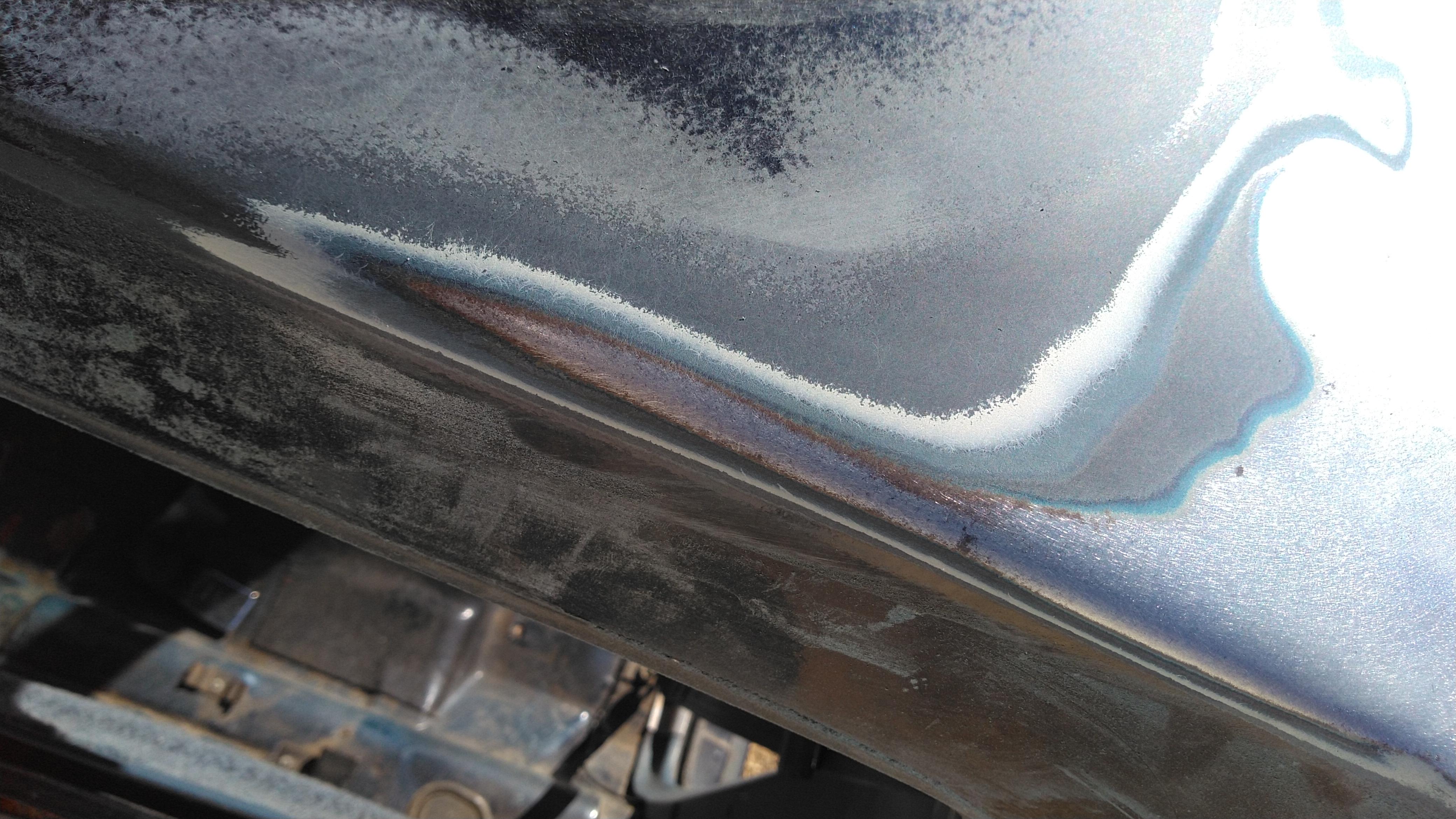 Screw holes in the roof 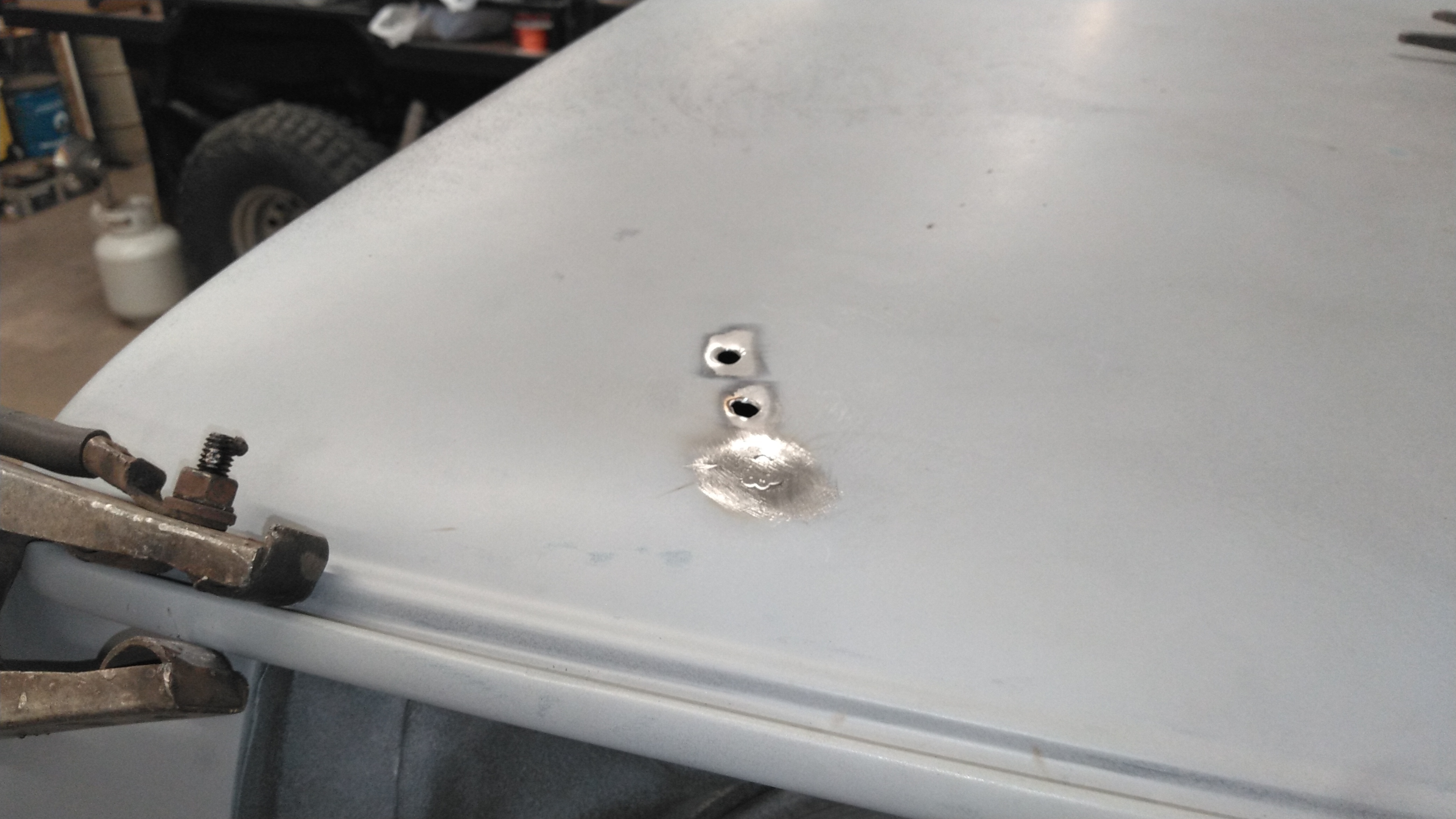 I tried to just fill in one hole and of course it got bigger. I can't get in there with my copper backer strip so I screwed some bolts into the holes, cut them off, used a body hammer to dimple them down a bit and welded them in place, then ground the weld somewhat smooth and covered with filler. 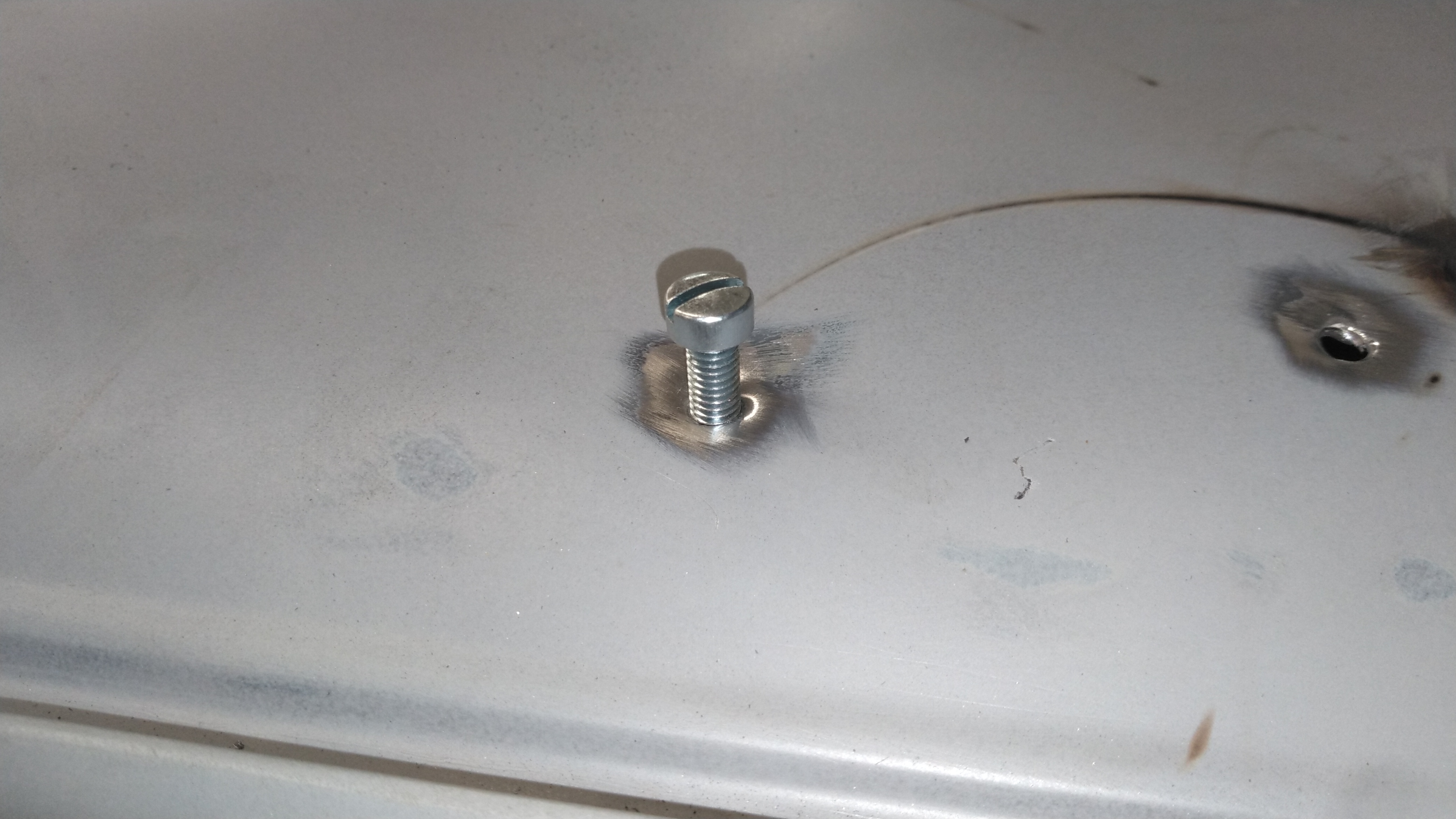 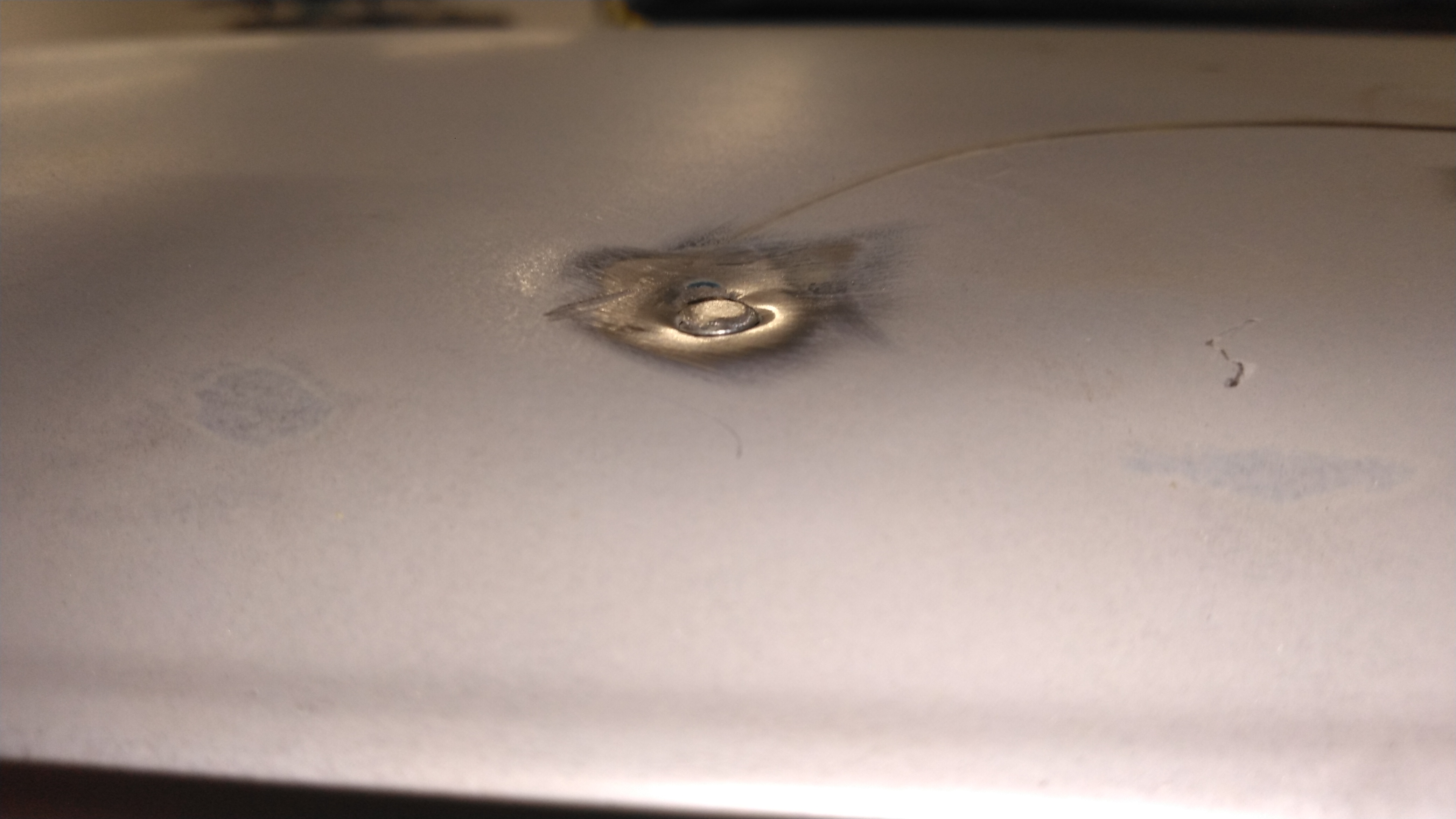 No more holes on this side 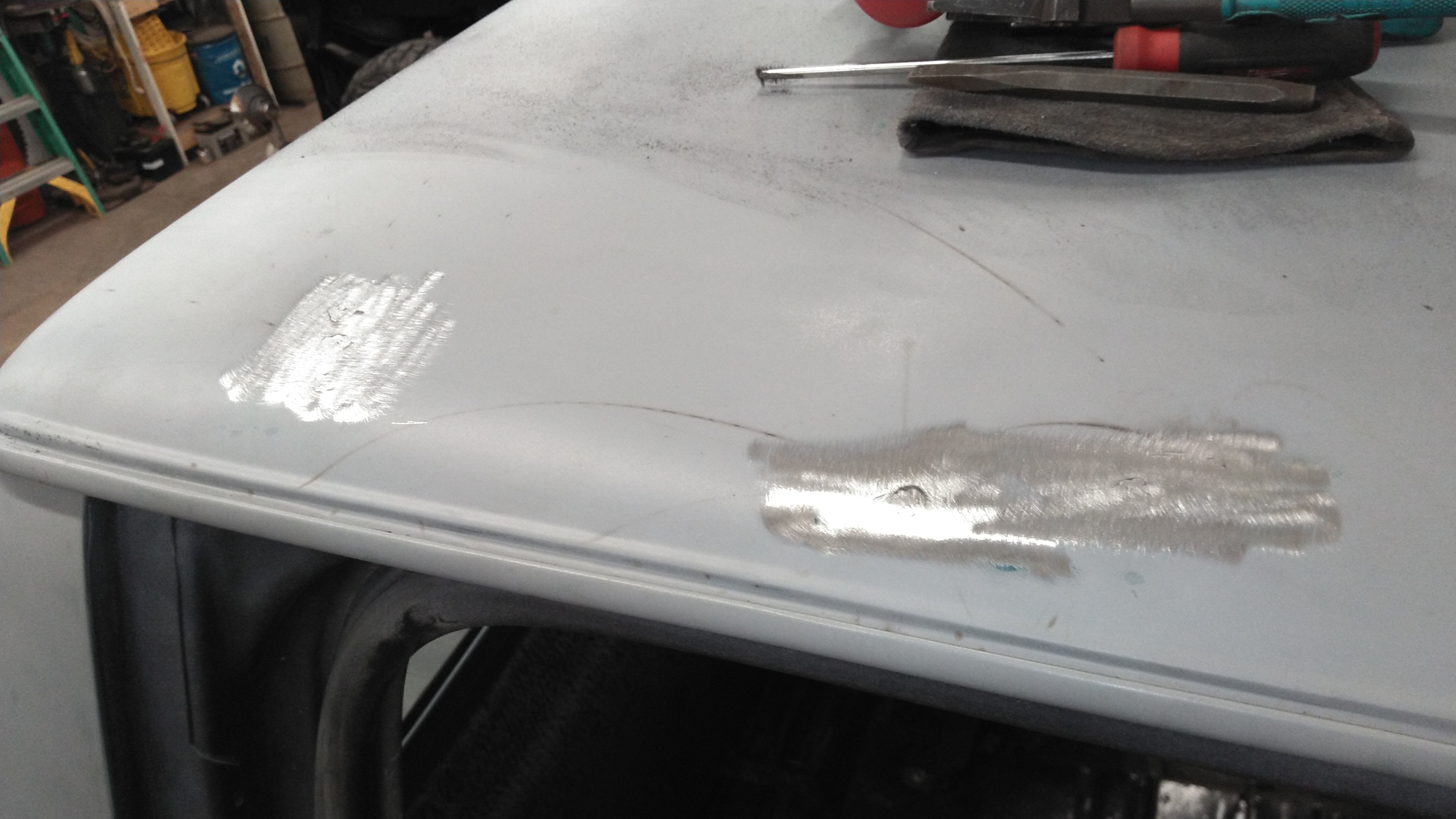 Still have a long ways to go on the cab. Hopefully I will have a few more nice days in the near future so I can finish sanding outside. It's really nice to just let the wind take the dust away instead of sweeping. 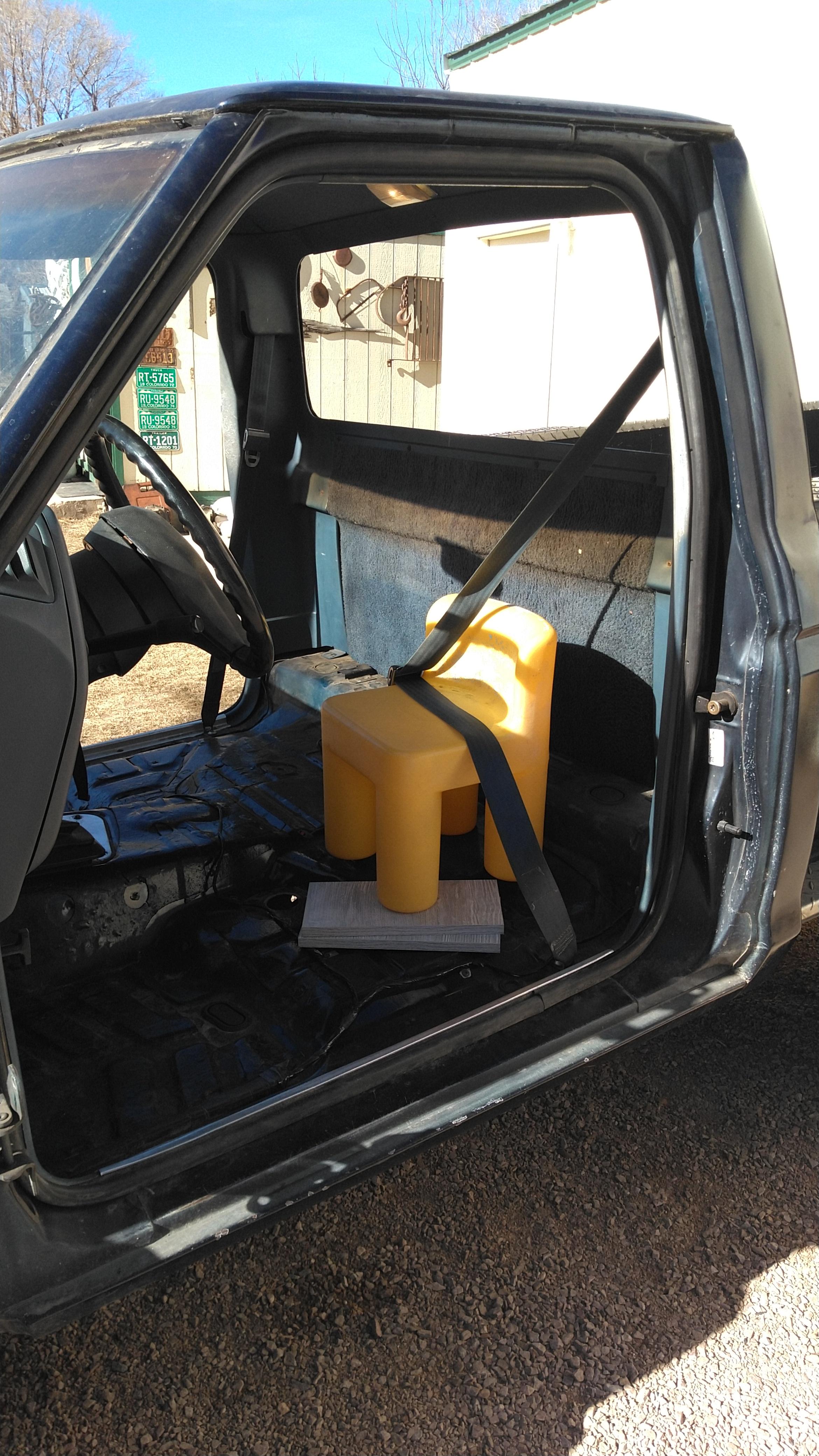 Had another nice day last Sunday and was able to pull it outside for more sanding. I just can't stop finding more dents... and rust... sigh.

This one I knew about. It happened when the truck got wrecked previously, when the frame bent, it forced the box into the cab. My buddy pulled it partways out with big screws and then put a ton of bondo over it. I almost left it alone but found layers of paint embedded in the bondo...it was just not very well done. I got it somewhat straight with a stud welder. Instead of 3/8" of mud, it's got like 1/8" at most. I had to weld a bunch of screw holes shut here too. 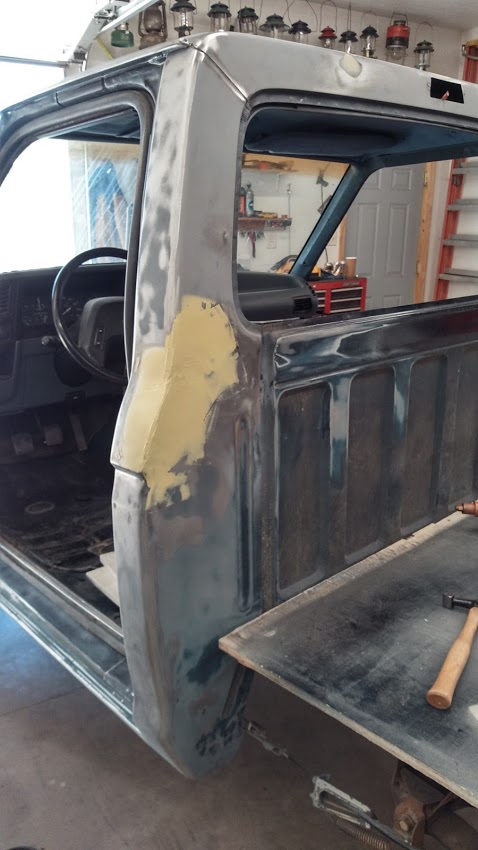 This one, I was not aware of until I pulled the window out and saw a chunk of pink stuff sticking out under the rubber seal. It was pretty deep and had at least 1/2" of mud in it and rust underneath (shocker I know.) I got it pulled out and just a light coat of filler was necessary. 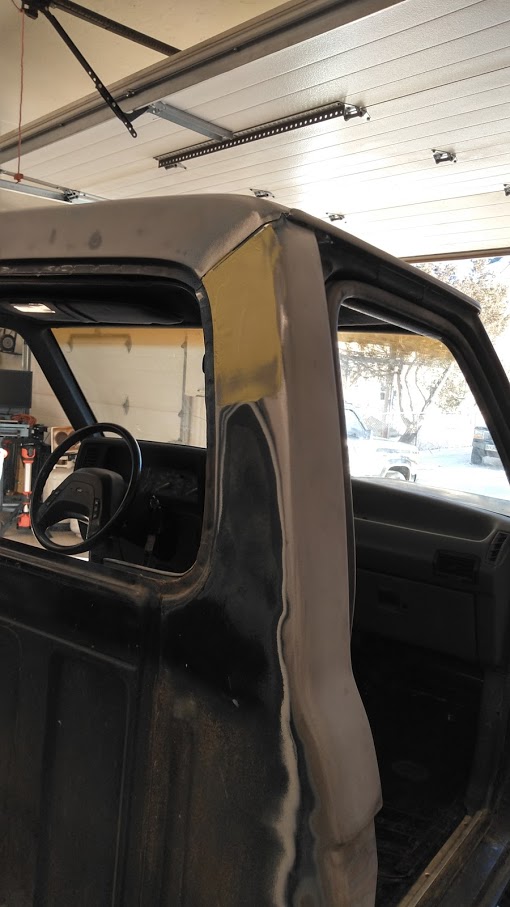 Currently working on smoothing out those two spots, another hole rusted through the roof on the driver's side and the cowl... someone removed one of the bars in the cowl vent so I'm fixing that. I really thought about swapping on a 2nd gen cowl to prevent leaves from falling through but that would be a pretty extensive project, and not one that I want to attempt right now.

The thinner the bondo the better! It's looking good man.

It's amazing how many dents you find once you start looking to fix them. They are never ending these trucks from 1. Being 30 years old, and 2. Being used as work/farm trucks. I got a ton of practice fixing them when I did mine, which is fine; more skills is always better!

BlackBII said:
The thinner the bondo the better! It's looking good man.

It's amazing how many dents you find once you start looking to fix them. They are never ending these trucks from 1. Being 30 years old, and 2. Being used as work/farm trucks. I got a ton of practice fixing them when I did mine, which is fine; more skills is always better!
Click to expand...

Thanks! Yeah, it's a battle. I'm getting better with the stud welder... I tried it on a couple other projects and ripped the studs out, leaving holes in the material. That scared me away from using it but on this I had no better options...only pulled out one, out of like 50. Have to be strategic with stud placement too.

I'm getting kinda antsy to paint the cab and assemble my huge pile of parts, and then start on the box. I found some cracks in the fiberglass, guess I'll have to add fiberglass repairs to my arsenal of skills.
You must log in or register to reply here.
Share:
Facebook Twitter Reddit Pinterest Tumblr WhatsApp Email Link