I’m Sure the Answer’s “No,” but... Drain Bolt on the Torque Converter?

The factory lines would have had a rubber section for flex. If you leave enough extra room an all metal line can be flexible enough to not break from stress caused by body flex.

It is also not hard to add a rubber section. You just cut your metal line in the middle, flare each side without a nut, and add a few inches of rubber hose with some clamps.

adsm08 said:
The factory lines would have had a rubber section for flex. If you leave enough extra room an all metal line can be flexible enough to not break from stress caused by body flex.

It is also not hard to add a rubber section. You just cut your metal line in the middle, flare each side without a nut, and add a few inches of rubber hose with some clamps.

Ah, I see. Didn’t know what the original setup looked like.

My situation is a little different, in that I don’t have a bad section in the middle of the lines. Instead, the PO appears to have done away with the whole front half of the lines and replaced them with rubber hoses. Not sure how he attached them to the oil cooler, but on the other end, he slid the rubber lines over the OEM metal lines running back to the trans and double clamped them (kind of like you describe, though I don’t know if the metal lines are flared inside of the rubber ones or not). They leak like a b@tch at that junction point.

Rubber lines aren't as durable as metal, they lose their flex and rubberiness. Replace them and all should be good. I have a couple feet of rubber line going from the rad to an oil cooler and a couple more feet running back to the metal line. I have to replace the lines every 4 to 5 years. Get quality hose clamps, the ones that don't have the slots in them. They are more expensive but better for the rubber lines.

adsm08 said:
The factory lines would have had a rubber section for flex. If you leave enough extra room an all metal line can be flexible enough to not break from stress caused by body flex.

It is also not hard to add a rubber section. You just cut your metal line in the middle, flare each side without a nut, and add a few inches of rubber hose with some clamps.
Click to expand...

So I pulled off the old rubber lines yesterday. The PO had just rough cut the old metal lines where they rotted (on a bend, no less), put some brass bezels over them, pushed on the rubber, double-clamped them with hose clamps, and called it a day. I’m so not impressed.

I picked up some rubber trans line and injector-style clips as ‘Floored recommended. But the more I think about it, the more I think I just want to make new metal lines, as adsm08 has suggested (provided I can get the remainder of the old ones off the trans). I figure that I’ll take a chunk of the old ones down to the parts store, in order to try to match the OD and ID as close as possible. A couple of questions:

1. When I disconnected the rubber lines from the trans oil cooler, I noticed that the bottom of the cooler has typical rubber hose fittings, as seen here:

So I guess that I have no choice but to connect the new metal lines that I’m going to fabricate to the oil cooler with a short piece of rubber hose no matter what? I was kind of hoping to avoid rubber altogether, but I know of no kind of metal-to-metal fitting that would hold on these.

2. When I removed the rubber lines from the oil cooler, fluid ran out of both. Is this sufficient to assume that the cooler is not plugged up, or should I be running further tests before I hook the new lines up to it? It looks to be fairly easy to remove once the grill is out, so I’m not against it if it means protecting the trans.

Hey, not sure if anyone ever saw this. I’m going to be replacing my auto trans cooling lines with custom ones made from brake line tubing, as adsm08 once suggested. The only problem is that where the lines meet the cooler, there will be a flare on the ends of the new lines meeting up to a flare on each side of the bottom of the cooler (inlet and outlet). Since the fittings on the cooler have already been flared, there will be no way to slide connectors over them. So the only thing I’ve been able to come up with to join things is a short (4” or so) piece of rubber hose. I don’t really like this idea; can anyone come up with something better?

Can a small pipe cutter can be used to remove the flare from one end.

Ranger850 said:
Can a small pipe cutter can be used to remove the flare from one end.
Click to expand...

Oh, geez. I never even thought of that. I probably could if I take the grill out and pull the cooler forward. Might be just enough tubing left sticking out of the cooler to put a new flare on the ends, after adding a connector. Thanks, man!!!

My credo
Rev On The Red Line

Going stick on the Ranger, but me burb is a 350/350. GM didnt bother to put in a drain plug, so I did.
But you cant drill what you cant see.

So bring some high quality trans fluid to Jiffy lube, and flush it.
Unless they dont do they any more...

When I fabricate the new all-steel transmission cooling lines (assuming I can get the old ones off the tranny), does anyone think that I should try to make a strain relief loop in each of them? I see these on brake lines sometimes...

I would say no. The lines I've seen have at least to 90 degree turns in them which would accomplish the same thing. I've never seen a stock loop in a trans line. Brake lines or under much higher pressure and are much more important so probably why there is a loop.

The lines I bought (3/8” steel brake lines) are proving difficult to bend without kinking on the hand mandrel I bought at Advance. The steel is quite hard. Any advice on how to make the bends a little easier and more smooth? Decades ago, I used a lathe with a mandrel to bend titanium and it bent like butter. I’m guessing that the difference lies in the fact that a machine can apply smooth, even, continuous pressure...

I have heard of filling the line with sand to prevent kinking, but I have never tried it myself.

This is the style I use; 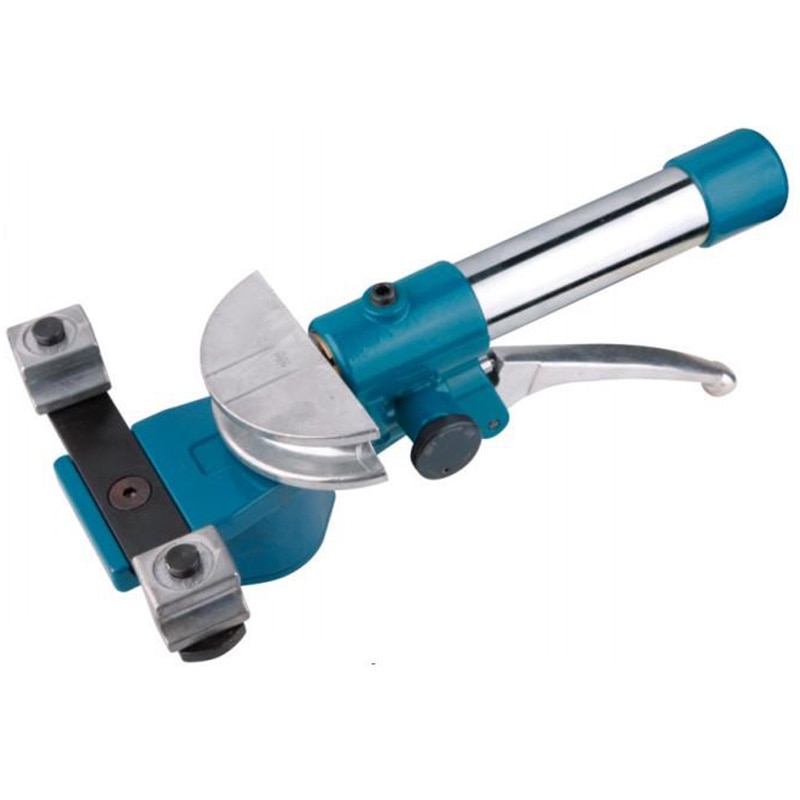 @AlwaysFlOoReD: Thanks, man. I found an inexpensive version of these online at the Home Depot (the better ones have to be special ordered). I’ll definitely pick one up!

PS - Because the passenger’s side floor board is now out, I did manage to get the old transmission lines out (Ford made it a total PITA). I’m assuming that where the lines screw into the transmission housing, there should be o-rings in there that need to be replaced, right? I didn’t have an o-ring pick to fish around in there the other day and it’s really tough to see inside...

Also, I’m thinking about just replacing the oxygen sensor while I’m in there. I never had a check engine light or anything, but this is probably the easiest it will ever be to get at the thing. It also has a spot where the metal is separated where the wires go in. Here’s a pic: https://drive.google.com/file/d/1-omsnHwKX5qFK7NlJhJbic_svnU7F0wv/view?usp=sharing.

If replacing, can I go with one of the cheaper ones available at Advance/AutoZone? I only ask because I’ve had to dump upwards of a grand into tools over the last few weeks in order to do this project (welder, drill press, 3 ton jack, jack stands, etc). It’s very disheartening. Thanks.
Last edited: Jul 1, 2018

adsm08 said:
The trans should have had a magnet, it may have been left out on purpose (a donut magnet is handy for lots of stuff), lost, or damaged and subsequently not put back in at a prior servicing.
Click to expand...

I just thought about something. Isn’t the trans pan on an A4LD aluminum? Mine looks reeeeealy shiny for steel...