How many is too many

I found another one. Grass has grown tall around her boys so I know she ain’t been eatin. Tied down beside the garage amongst other discarded frick and frack. Lookin lonely and forlorn. Waiting to be freed from her paddock to gallop on the dusty back roads of southern Michigan. Momma said I can’t have them all, but momma is gone now and I say , oh yes I can.
Hiding down the way on another dirt road I spied another 2 gen BII. Imma see if they might could be willin to part with her. Give her a new home with my other three.
Four is not all of them momma, just some.

And the psychological battle begins
Collector
OR
Hoarder

I've held my RBV addiction to two since the the late 80's. There was one time I had three... but I was about to flip one for the next.

If I had the room right now... I would have another... just not in the cards right now.

I currently have Three rangers, plus other vehicles. Although I am about to give one away.

As long as they all serve a different purpose I am conformable I do not have too many vehicles. One to go fast, one to go anywhere, one to do all the work, and one to soak up all the miles in my commute.

Roert42 said:
I currently have Three rangers, plus other vehicles. Although I am about to give one away.

As long as they all serve a different purpose I am conformable I do not have too many vehicles. One to go fast, one to go anywhere, one to do all the work, and one to soak up all the miles in my commute.
Click to expand...

I divid the chores. One summer daily driver one winter. The go anywhere rig is just too clean to get dirty. So she keeps the shop floor from getting dusty. I need number 4 for the go anywhere. But the F350 Super Duty, well that’s the goin to town rig.

Pics man, pics. I always look too. But some are just to rough and they want way to much for the effort.

bronco2fan said:
Pics man, pics. I always look too. But some are just to rough and they want way to much for the effort.
Click to expand...

I saw no activity around the place so I didn’t get any closer than my truck window. Homey don’t trespass on property or women

. From 50’ she looked complete. Saw no dents or missing parts. Tires all there. I’m hoping I can catch someone home in the evening or weekend. If I do I’ll bump out some pics. 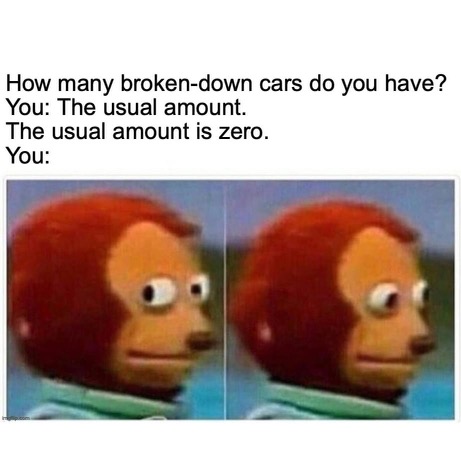 Though it is one of my all time favorite vehicles and I certainly love having a parts vehicle; my only consideration would be a 2 door 91-94 Explorer or same year(s) Mazda Navajo. If I found a decent rig I would have to do a carbed V8 to feel my fare share of Nirvana.

For the shear economics of it, I would undertake that project over an original Bronco.
Last edited: Nov 11, 2021

I don’t think I have too many yet. I just lack time and money.

I stripped and scrapped two Bronco IIs over the years. One had been in a bad wreck and the other was a little far gone to save and didn’t have a title. Those parts live on. I fixed and sold one. The other two I still have.

Then there’s the Rangers. I still have all that I’ve owned. Well, one I’m feuding with insurance over but I intend on having it back (my 92). I have one that I stripped back to the cab, frame and all. Was gonna scrap it but a friend made some suggestions and it got put on the back burner project list.

I am currently kinda looking for another because I need a running automatic again. The 92 was supposed to be my work truck and winter beater. But now that it’s totaled I need a replacement.

Family keeps telling me I need to liquidate the fleet, but I don’t think they understand the complexity of the situation here. My Blue 00 Ranger would make a great runner when I get to fixing it, it was good on gas and fun to scoot around with. My 88 B2 is getting a resto mod and would be a fun 4 person vehicle to cruise around in. The choptop is a fun toy and was intended for off-roading. The F-150 is my workhorse and plow rig. Green 00 Ranger is my fun toy. F-350 is the heavy hauler. 89 Ranger is supposed to be the crazy off road toy. The fact that only the F-150 is currently driveable is simply a minor detail

Too many in my mind is when you have to choose between snaking between them while parking your daily driver or parking some extras in the empty lot next door...which is where I am at right now.

So basically I just need more land, that would solve my problem.

i had six e30 bmws and a euro 635csi one time. they all ran once i got them home, fuel pumps usually.

my "driveway" will hold about twenty cars if i still want to be able to drive to the garage. i can add three more cars if i want to only drive to the back door of the house

shoot, right now i have six cars in the driveway too. the ranger and the Cherokee are spare vehicles and the other four are the ones we daily drive (and daily means once a week for mine since i ride my bicycle to work)

Kinda forgot to mention, I have a 97 Explorer that was supposed to be a donor but then I got to messing with it and the damn thing is rust free (a rarity here), and it was a less than ideal donor, so… thinking I want to get it fixed up at some point. Also stripped a 98 Explorer for parts that the body was pretty well shot, which became my donor.

Then there’s the 00 Ranger I want to get off my dad, throw a couple parts at it and a flatbed and run it or sell it.

My property had 4 cars on it when I bought it. Old Beetle, Geo Metro hatch, Renault hatch, and a New Yorker IIRC, which is the only one of the bunch that doesn’t look like hell. I’d be happy to see them all gone.