Going the other way with gears

Best way to improve MPG is skinnier and light tires, less friction less weight
Lower it closer to the ground to prevent DOUBLE air drag as much as possible

Unless you're cruising over 65mph often I don't think you'll gain much in mileage going from 4.10 to 3.73, but hey, if you have it try it

Good replies, and thanks for the input. As I said, I'm not asking whether I should do it or not, but what you think about it. That's why I've been sitting back and reading not really replying.


Josh B said:
I did something similar with my tires. It had 265's and I dropped it to 235's.
Basically a 7% difference according to an online tire guide.
Click to expand...

Those first numbers only tell a width, need more of it to extrapolate a height. Just going to a narrower tire can result in lower rolling resistance and, as a result, improved fuel mileage.

Honestly I don't recall what the stock tire size for this truck was, been a long time since it had stock sizeand since I paid much attention to the information label in the door jamb.

I understand that people going to 4.56 with larger tires is to get back to the same overall gear ratio, but not everyone goes to 4.10 simply because they went to larger tires. I've seen quite a few people doing it just so that they could spin the same size easier. Burning rubber isn't really something I care about doing, it gets expensive and I already wear them out fast enough in the stuff I drive often. They tell me I like taking curves a little too aggressively.

This isn't about gas cost savings, if that were the issue I'd have gotten rid of several vehicles quite a while ago, this one included. I also don't intend to buy new gears. I've got the rear axle that will bolt right in. I've also got an Explorer Disc axle in 3.73 LS if I wanted to convert it, but I don't need 31 spline or discs for this truck and I'm still hoping I might use it in another project down the road. If I like the change I'll buy a used 3.73 front diff from the junk yard or someone parting a truck. The plan is to convert from plastic locking hubs to live axles and, IMO, swapping the diff won't really be much more work.

RonD said:
Speedometer changes with tires size, only the 1998-2000 Ranger used that ABS sensor for speed
Click to expand...

That's one part I've thought about but haven't looked into yet. I need to dig in and see if ForSCAN can be used to correct the speedometer on this year model. I've got it and the OBDII adapter for datalogging my F-250, but haven;t playewd with it's more advanced functions yet. Worst case I'll make a mental note of the difference and use GPS on longer trips where I really need to keep an eye on it.


don4331 said:
@JoshT has a '99, so in that magic range. Anything else, changing ratio and/or tire size impacts speedometer.


RonD said:
Best way to improve MPG is skinnier and light tires, less friction less weight
Lower it closer to the ground to prevent DOUBLE air drag as much as possible
Click to expand...

As said previously this isn;t all about MPG, but something like that is in the works. Swapping the axle is going to be part of getting it closer to the ground. Currently sitting on Explorer springs and lift shackles with the torsion bars cranked to match. I'll be going back to stock springs and shackles w/o lift blocks, those will be coming from the donor along with the axle. Torsion bars will be turned down to match.

Tires will be addressed when these get closer to worn out. If I've got room to get it lower, the next tires might be shorter too, but I'll know more after the first stage.


scotts90ranger said:
Yeah, mileage is a hard one to gain, I've played with a few tire sizes on my '97 and the only thing that improved the mileage was passenger tires over LT or winter tires...

Mileage isn't a driving factor, but also a gain I wouldn't turn down. FWIW passenger tires are likely on the horizion once the current ATs wear out, but that'll be a little while as these are still fairly fresh and I've got other stuff to spend the tire money on right now. Since new tire will also come with new wheels, I've got some other stuff including cosmetics that I want to tackle before I start making wheel choices.

I don't live in town and typically bypass the city when driving to and from work. The main places I go are work and hunting club. I've got a 30 mile commute to work and around 120 mile round trip to the hunting club. Most of my driving is interstate and highway. and for the majority of those highways if you're driving 55 you're gonna get run over. So yes, I spend a lot of time cruising at 65+. Also yes, I can easily watch the gas guage drop as I'm booking along in the other truck. Especially the F-100 even though I hold back and make traffic go around me.
Last edited: Nov 27, 2022

Josh B said:
I did something similar with my tires. It had 265's and I dropped it to 235's.
Basically a 7% difference according to an online tire guide.
Click to expand...

Stock tire size is on your driver's door Build Label

No, as far as I know, Forscan can not talk to GEM, which is where the calibration is done on 1998-2000 Rangers
But check at Forscan Forum that may have been added

No, as far as I know, Forscan can not talk to GEM, which is where the calibration is done on 1998-2000 Rangers
But check at Forscan Forum that may have been added

I know, just saying I haven't actually looked at that label in a long time.

I've been meaning to dig into the forscan forums since I got the stuff to do it, just never taken the time to do it. Might have to fix that while I'm killing time at work this week.

I've got the OBD2 adapter, if Forscan won't do it I'll have to see if there might be some other software that will. I guess worst case I might be able to find a Ford dealer that can/will do it.

RonD said:
No, as far as I know, Forscan can not talk to GEM, which is where the calibration is done on 1998-2000 Rangers
But check at Forscan Forum that may have been added
Click to expand...

JoshT said:
I've been meaning to dig into the forscan forums since I got the stuff to do it, just never taken the time to do it. Might have to fix that while I'm killing time at work this week.
Click to expand...

So turns out thats easier said than done. One has to have a paid version of Forscan to register for the forums. Well I'm not going to pay for Forscan if it won't do what I need, and I can't find out if it will do what I need without asking on the forums.

I tried searching the Forscan forum, both with the built in search and with google, but not having much success finding answers. Most results are for newer vehicles. The few that pop up for the right age Rangers basically say not yet like its something being worked on, but those results are all years old.

try this one. I've heard about it but not used it.

If the externals are good, I would swap in new gears instead of an entire junkyard axle.

You could also go bigger tires.

My wife's 95 has 3.27 gears and is bone stock...she gets 14-15mpg, it is a total turd. She hates driving it because of how slow it is. I am going to swap 3.73s into it, I think that will make a big difference both in power and mileage. Highway gears do not always equate to better mileage although 3.73s is a good compromise. I don't think it will make much difference in your case unless you see a lot of highway time and want to keep your RPMs down a little bit. 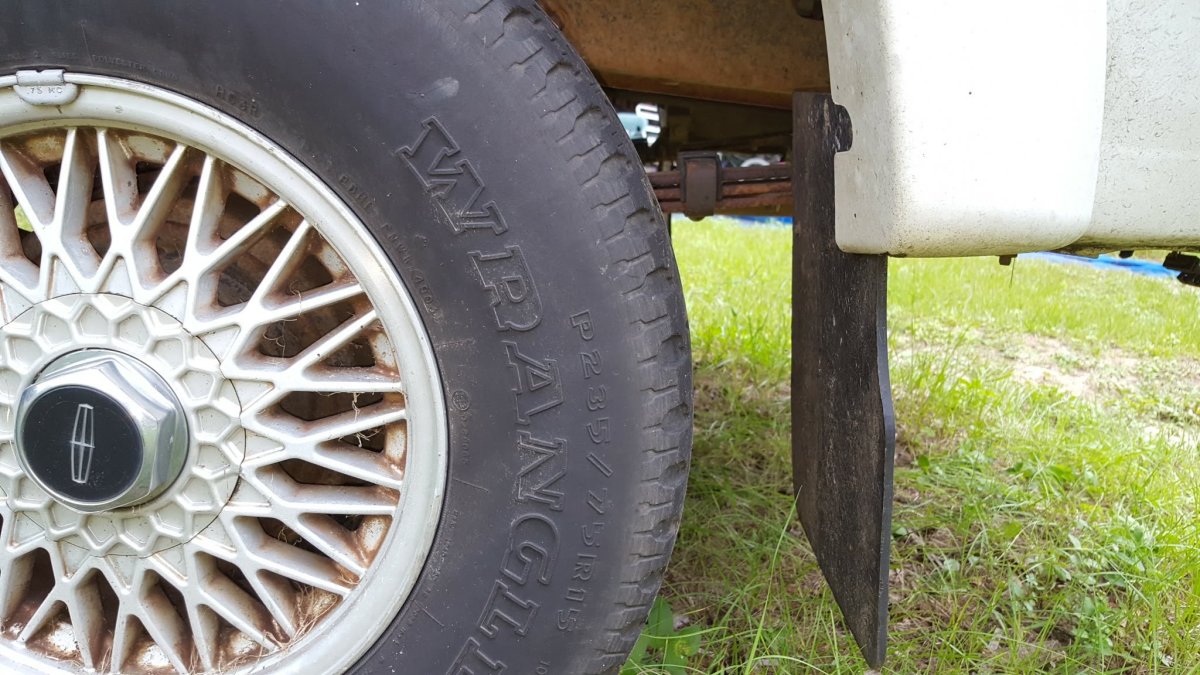 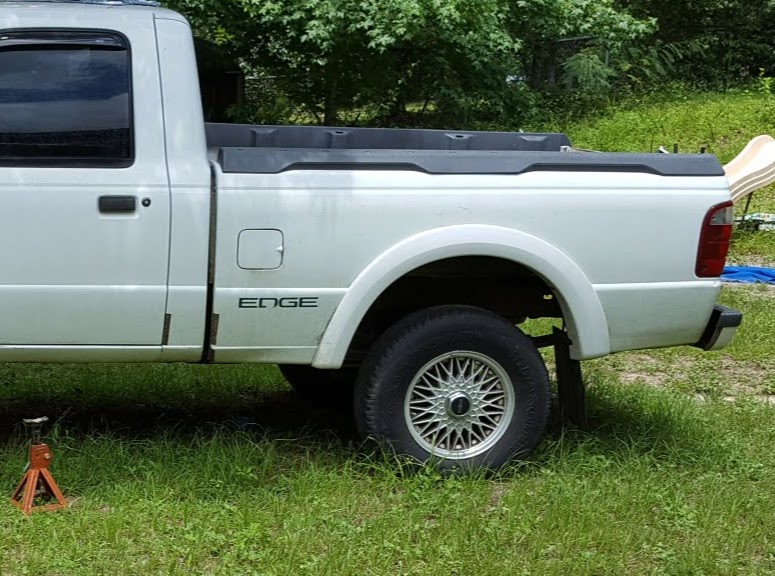 Man, those lincoln wheels look good on the truck. I need to find aome for my truck

If the externals are good, I would swap in new gears instead of an entire junkyard axle.

You could also go bigger tires.
Click to expand...

There have been quite a few Ranger gear ratios. I've owned a few between 7.5s and 8.8. Haven't driven many, but owned a few.

My donor 3.73 isn't a junk yard axle. It was a running driving 4.0L 2wd Ranger until the guy's wife wrecked it. Busted up the front clip and bent frame rail, many of y'all probably would have fixed it and kept driving. That was the owners intention, but plans fell through. I needed an engine for the 99 and bought it for parts. I don't have a lot of miles on the engine since (working on that now), but the previous engine would have shit a head gasket by now. Seems to have been a good $500 purchase.

Are you talking about the front or the rear?

If the rear. It's really easier to swap the axle than the gears and best I can tell there is nothing wrong with the donor axle. Although I haven't proven it, I believe that there is something wrong in the original axle. It's "clunked" since I bought the truck, like too much lash. If I get on the gas after coasting it literally clunks as it takes up greeply in the drivetrain. What ever it is, it's already messed up, I just decided to ignore it and fix it when it breaks. I've ruled out the transmission and the driveshaft, only thing left is the axle. Transmission has been rebuilt (for slipping) and the problem stayed, u-joints are tight and no play between sections of the driveshaft.

If you're talking about the front, that's entirely possible. That said I doubt I could buy new gears and have them installed for what I could buy a complete differential for. Front differentials also don't have near the wear and tear that rear ones get. I'll worry more about that when I get there.

BTDT on the bigger tires. As previously menioned, what I want is in the other direction.

superj said:
Man, those lincoln wheels look good on the truck. I need to find aome for my truck
Click to expand...

The wheels do fit that truck well, but not the style I'm aiming for. I'll be on 16s minimum and there's only one set of Ranger wheels I'd consider. I'm really leaning more towards a 17" wheel in aftermarket Mustang fitment. Not entirely sure which ones. Got to do some studying on specs and tire sizes, but I've got a lot to do before any of that matters.

i like the mustang ones too but the kids already have too many wheels stacked up in my garage.