Fog lights come on after ignition turned off -- not kidding...

But seriously folks... I noticed my fog lights were on after I got out of my truck. Headlights were not on, keys in pocket. Etc...
I read up on how they work. I was able to get them to come on once when wiggling the switch with the ignition on and the lights off. They do come on when they are supposed to according to the owner's manual.

I pulled the fog light relay (48B in engine box). The relay bench tested as normal with 12V, up to 2A control voltage. In banging the relay upside down on the table with no trigger voltage got teeny beeps out of the continuity meter but that would be the truck bouncing on it's roof, not parked. (Grr) I ordered a replacement relay but I don't expect that to fix anything.

The more I read logic charts on the fog light switching the more I go back to my time in grad school for computer engineering (which is sad). Bad light switch, combo switch, high and low beam circuits involved, and something about negative or ground switching logic which explains why disconnecting the light switch did not make the fog go off. I read some great posts on the logic and wiring from pjtoledo and Earl43P - thank you, saved everything. I used the fog lights once when I got the truck to see if they worked and never since. But, I like having everything working.

I would just like to hear ideas on what and how to do more testing, thoughts about the described behavior, snippets from special workshop docs, and/or hacks around all that logic with the right safety since I read too many posts about stuff melting. I looked up all the fuse and relay locations. And, of course, it was raining today, so dry test results coming up... I'll skip the highlighting and emoticons since I want to hear from people who got all the way through this wall 'o text.

What year and model is the truck? (Sorry. I'm on tapatalk and don't see your profile info.)

I have a busy day. But I'll turn it over in my head and try to look at a wiring diagram later.

If there is aftermarket wiring involved, it could be a wire connector loose and touching another wire somewhere.

Thank you ecicbphoto.
Truck is a 2010 Ranger 2WD XLT 4 door, v6.
Everything is bone stock.
Two other data bits:
- Yesterday was the first big rain I drove in this year.
- The battery is weak and not new. (I had a complex electrical issue on a VW years ago that vanished when I installed a new battery.) I haven't measured it but it's time to replace.

I have multimeters and a telco toner/probe if needed.
Look forward to hearing back.

I haven't found a diagram that definitively says that it would be for your truck. I'm not sure when they started using the "smart junction box" in these trucks.

But, since you mention the relay out in the engine bay, you probably have the older style of wiring. If that is the case, you can narrow things down a bit. If you pull that relay out and have the light switch off, then you should not read voltage on pins 85 or 86 in the relay socket. These are the pins for the coil. see diagram below.

If you have power on either of these pins, then there is something wrong at the light switch. If no power, then turn on the fog light switch and look again for 12 volts on one of those pins. If it's not there, then there is a problem with the switch. You should also have power on pin 30. This is coming from the fuse to actually power the fog lights.

The overall wiring diagram should be similar to this. 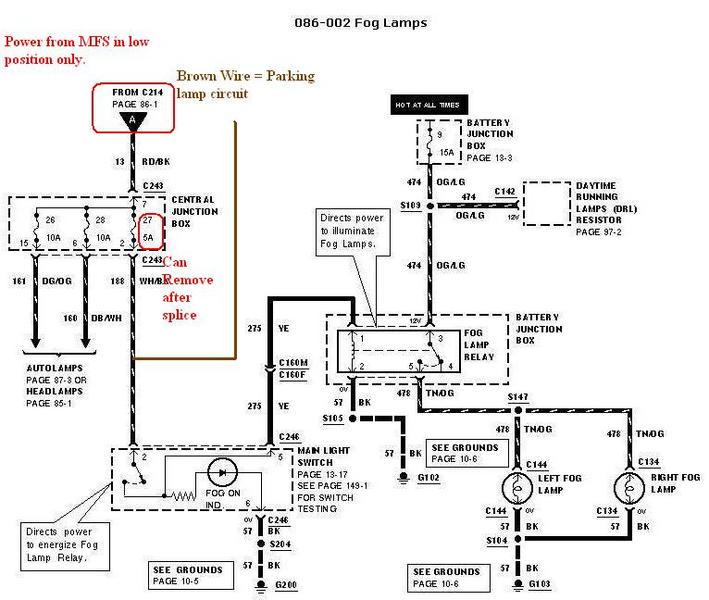 The stuff you mentioned about ground switching would apply to newer vehicles using the smart junction box. That wiring diagram would be similar to this. 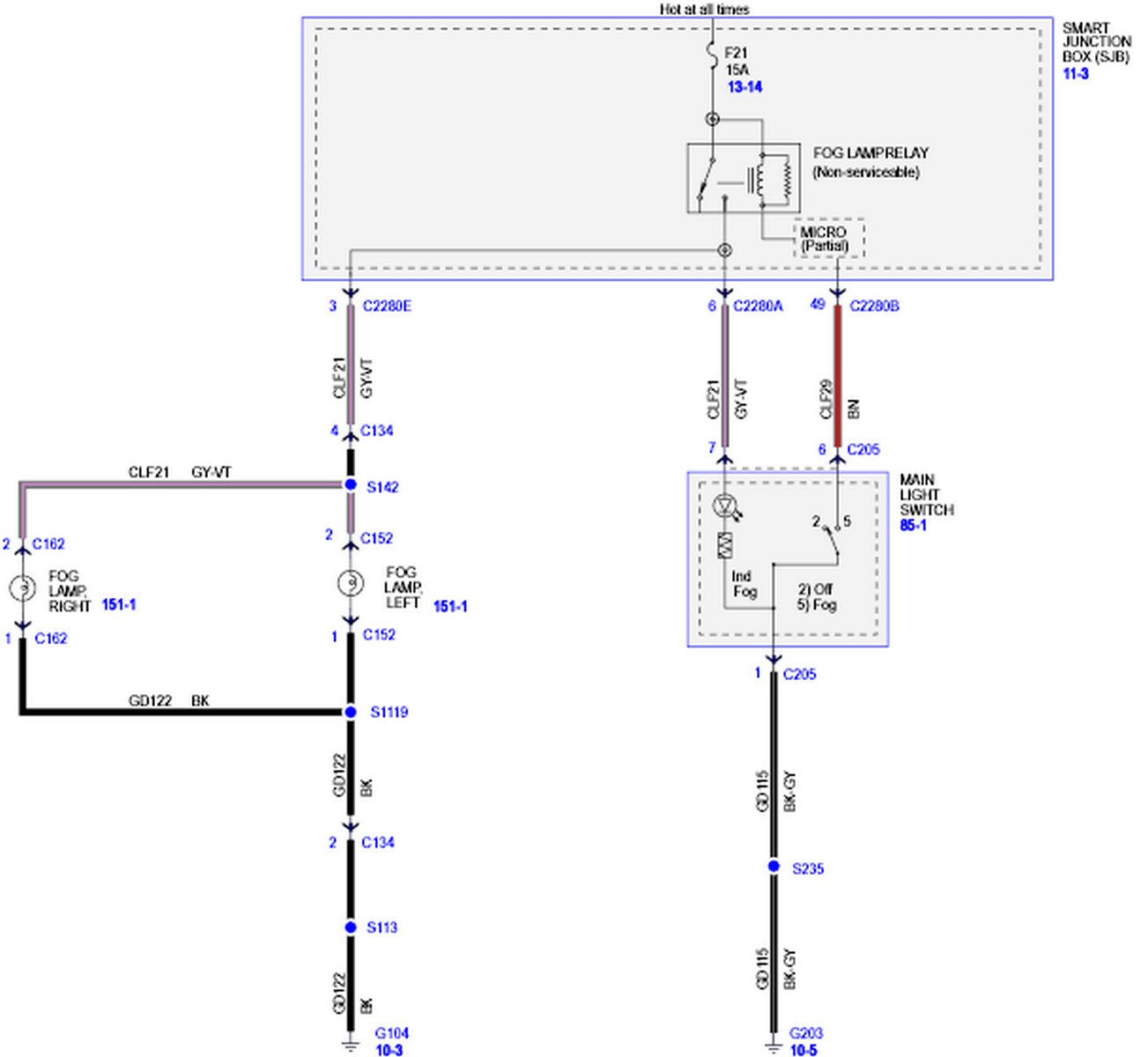 during the malfunction, when the fog lights are on when they shouldn't be, is the fog light indicator light on? if no that should put problem on the relay side, if yes look at the switch.

In order...
On my truck, the relay for the fogs is 48B. It's a small profile, rectangular 4 pin relay that's rated at 20A. Marking: 9l2t-14b192-aa
It is not square in shape like the one in the first picture. I will check those voltages you mentioned.

As far as the lights going on - it's when the truck is turned off. No indicators are lit. I'm going to dig deeper into the logic tomorrow with more testing. I know it's only intuition but ground or "normally on" switching and a dying battery with this happening only after shutoff (of alternator too) is still something I want to dig in on before I start treating this like a rusty old Range Rover and checking for shorts in the entire system.

Thank you for those diagrams. I think a used Helm wiring diagrams book might be money well invested.

Stay tuned and thank you.

I was looking at those diagrams. I don't know that any of them are for my vehicle but they are interesting. If you notice the "always hot" line in the third diagram, this would be consistent with something turning on when it's not supposed to if that "hot" voltage level is not high enough to actuate or prevent actuation of the relay. With my dying battery and no issues during engine running, that is where my labrador retriever like nose is wanting to start tracking scent. Pull-up/negative logic hurts my brain and can even hurt electronics.

They did a study on programmers (and I am one of those) where thinking about negative logic flow takes twice as long as "normal" logic flow. I cannot back that up with a single reference.

Yes. I realize that neither of those diagrams is an exact Ford Ranger fog light diagram. But I would be willing to bet your trucks wiring is very very close to one of those. Close enough for troubleshooting.

Your 4 terminal relay works the same as the square one in the first picture. Yours just doesn't have the 87a terminal for the normally closed contact. The relay coil must be energized to close the contacts and energize your fog lights. When the coil is de-energized, a spring mechanically opens the contacts and breaks the circuit to the fog lights. Low voltage will not make it fail to open the contacts.

Normally a relay like this fails in one of the following ways.
1. The coil burns up and stops working, thereby preventing the load from being energized.

2. The contacts get dirty and fail to complete the circuit when they are closed by the coil.

3. The contacts get welded shut and fail to open the circuit when the coil is de-energized.

4. In rare cases the spring could fail which would allow the contacts to remain closed or bounce open and shut randomly with vibrations from outside sources.

Copy everything and thank you. I really appreciate those diagrams and saved them all.

I did bench test the relay with a battery charger as my input. The relay looks as clean as the new ones and worked perfectly on the table. I'll do the tests suggested above tomorrow or the next day plus a test or two I was thinking of.

P.S. (Noob question...) Why was it so hard to pull the relay out? Obviously we don't want them shaking loose. But, I really had to yank on that thing to remove it.

This is the wiring diagram I found in my service disk. 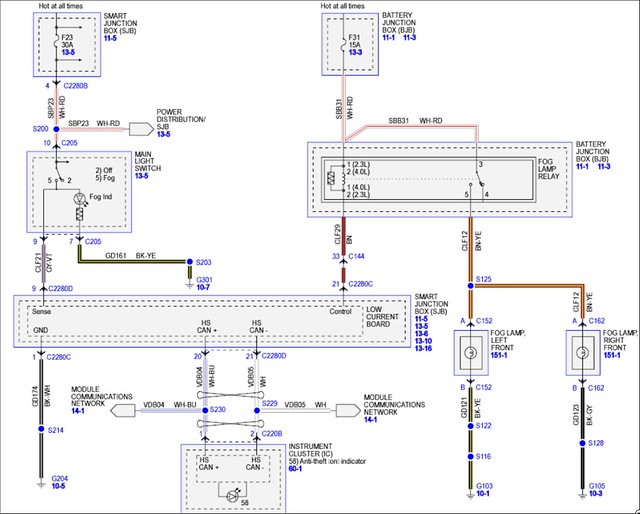 I haven't tried any of the testing yet. They didn't have my battery in stock yesterday so I'll try everything tomorrow.
Last edited: Jan 14, 2018

By the way. Don't lose that disc. As you just discovered, it contains very important information.

Thanks again (and again and again) Eric. I got that disc on eBay for 12 dollars and has the full Ford ETIS for 2010 and 2011. I could not believe it. I ripped an image of it and I'll run from that image which should be snappier and will not risk damage to the original media. Anyone who wants that eBay listing, just PM me.

When I have a new battery on my tool cart, I'll test scenarios with the aged battery vs. the new one. I can clip a charger on there to do the same but I'd rather just have a wrenching day and figure it out. If, with a new battery, I see the same Bx, I'll pull the relay out again. I just don't expect that to be the case.

For Eric:
Way back in the thread I mentioned pulling the switch connector for the main light switch and there was no change. Thank god they added that little removable panel to make it easy to access that switch.

New battery should be in this afternoon.

OK, so I got the new battery. If the problem was repeatable with the old battery, I planned to put a charger on it w/ truck off and see if bringing the voltage up a bit would make the lights go off. But, new battery, old relay no repeat. The big difference is it's dry today (which means I could have an intermittent short).
So, oh well for now. I sure learned a lot. I put the new battery in and everything worked as specified. I had pulled the relay and banged it around a bit while testing, and I pulled the switch connector and plugged it back in. That may have changed something. If it happens again I'll do the above testing immediately. And actually, I've had plenty of luck in life "fixing" things by taking them apart and putting them back together.
And... My CD player very rarely makes a glitching sound that's very shot and loud - like someone shorted a guitar wire plugged into an amp. Haven't heard it in months but heard it again today.

Thanks so much for your responses and getting me to go out and get real docs.

I used to be really active on here and then got the "new truck." But, since it's not new anymore, I'll be trolling around some more. This forum has always been a favorite.
You must log in or register to reply here.
Share:
Facebook Twitter Reddit Pinterest Tumblr WhatsApp Email Link