I watched vid on how to take off clamshells around the steering column. My tilt it frozen in place. Problem is, they say, tilt the wheel down to take off the clamshells, but that's the whole problem, it's up, and I can't move it, that's why I'm trying to get to it. I'm afraid to just start spraying stuff in there because there's ignition wires etc etc and I don't want to muck something up that would be even worse.

Besides that, the vid says, unscrew the tilt release shaft/knob, and that's also frozen in place. If I can get to it, I can soak it in WD40 or something, but right now it's really in there, I even reefed on it pretty hard with my hand but I can't unscrew it. I suppose perhaps putting some tape around it and grabbing it with vise grips might do it, but I hate forcing things. Anyway, that only helps me if I can get the clamshell off, and if I can even get the top part off I probably can get to the, I imagine, universal joint that lets the steering wheel tilt, and soak it in lubricant, probably that would free it up. It's really stuck. I guess somebody had it where they wanted and just never changed it. Any ideas? I really can't bend/maneuver the top part enough to get it off without breaking it, which I suppose is an option - get another one, break that one off, then put new, but, man, I don't wanna do that unless I really have to do it.

The tilt lever has a square place, behind the knob, to put a wrench on it. The shaft comes out. I saw that after I used a rag and some channel locks to grab the knob. If you pull the knee trim and the metal plate behind it, you can get to the 4 bolts that hold the steering column up. You can drop the entire column. Ive swapped clusters so often that i drop the column to make the cluster trim bezel easier to remove.

Tugg, Thanks. That is awesome. I was going to do what you did, but it sounds like 'they' knew this could happen or else the square part was for making assembly easier.

Does knee trim have screws or it snaps on?

You mention cluster trim bezel, and I'm wondering, would this be the part I want to remove as part of replacing instrument bulbs (#194's)? I have a couple burned out, and it was well suggested to me to replace them all once the thing is apart. I was only able to get 2 of the 5, or 6, needed, they didn't have then on hand, so I'm waiting on that. I got the "Silverlight" ones which are a bit pricier but they said they are whiter than the regular #194's. If what I said is true then it would make sense to do both those things at the same time. Lack of tilt doesn't stop me from driving it, so when I get the rest of the bulbs it would make sense to just fix the tilt and bulbs as one job, if I"m understanding the process as you described it.

Ahhh. Thanks RobbieD. I'll try that.

Good luck. Let us know how it works out.

The knee trim has clips and a few 7mm bolts and some clips. 2 of the bolts hold the hood release handle to the dash. There is a metal plate behind it. Once those are out of the way, you can access theb4 13 or 15mm bolts that hold the column. You may or may not want to go that far. The cluster bezel is the plastic piece around the cluster that has the headlight and dash dimmer switch in it. It has to come out to get the cluster out. It is a pain in the ass to remove and reinstall with the column in place. Mine was cracked when I got the truck and it got worse the more times I removed it. The headlight switch had been epoxied in already. That is why I drop the column now. I got a new bezel and don't want to mess it up. Some people don't have a problem with the bezel. Up to you.
I got a 10 pack of 194 bulbs on amazon. Do yourself a favor and before you get it all back together, plug the cluster in and make sure all the bulbs work. Trust me.

Thanks Tugg that is a ton of help. Yeah, good thinking, test before re-assembly.

Sounds more and more like the smart thing is fix tilt and bulbs at the same time.

Speaking of which, I'm missing the cig lighter. I don't like the ugly hole. I'm thinking of just picking one up at a junkyard, but I'm thinking there must be some wiring I have to connect up, so that might be another thing to do when stuff is apart, though it might not be on the same bezel...

To get the stereo out, do I need the U-shaped device that unlocks it? Also, if I take it out, will I have to put in a code for it to work again afterwards? Sometime I want to upgrade it, in which case I probably don't care about codes, but, it could happen that I want to take it out for some other reason.

I'm not aware of any stock Ranger having a radio with a security code.

If your radio -is- still stock and you want to remove it from the bezel without taking the bezel itself out, there are tools to do so. Taking the complete bezel out is only a couple of bolts and won't require the special tools as I recall.

This bezel matches your stock one, correct? 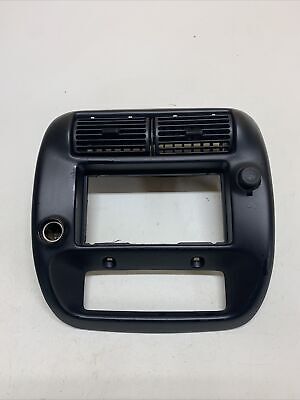 THE VENTS WORK JUST AS THEY SHOULD! THIS BEZEL IS INGOOD USED CONDITION. HAS A HANDFUL OF LIGHT SCUFFS AND AREAS OF WEAR HERE AND THERE AS YOU WILL SEE IN THE PICTURES.
www.ebay.com 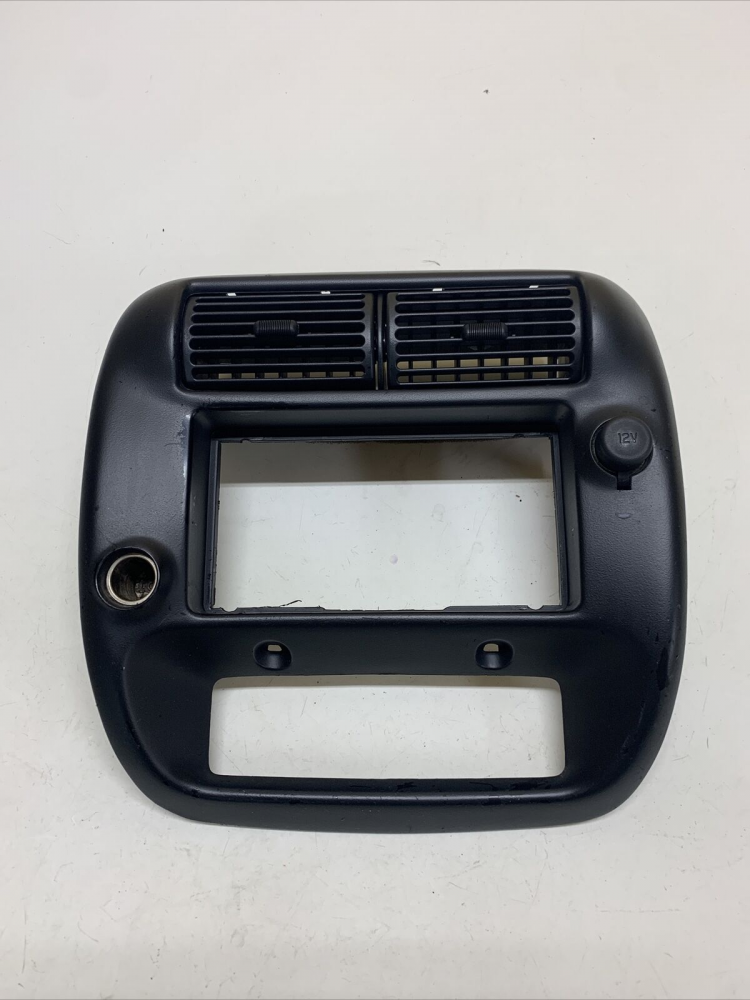 Yes you can use the U-shaped removal tool. Like said above, I just pull the two screws and remove the bezel. The cigarette lighter wiring is there. You bezel has a thin lip that it holds on to. If the lip is still there, your lighter housing may have just come loose. The back screws on the the body. Cheap part at an auto parts store or rock auto.

I duuno, something looks different. That one you sent has two buttons or something under the 2-DIN stereo slot. Here's mine, sorry for blurry pic but you can see it well enough I think.

I gotta get lighter, junkyard I guess. The 12V Aux works fine. No idea why lighter missing, perhaps it was pushed inside and is in there.

Lot of awesome stereos will fit that 2DIN space, they say you have to cut some sheet metal behind but that's the same as putting 6x9 speakers in, it doesn't show after and you can use the OEM bezel. Then you'd have Bluetooth and all the stuff that does and so on.

Sorry just saw about the lighter. Yeah I'll check, maybe its just in there. That'd be an easy fix.

AHHHHHHHHH. thanks. so it's the same then.