The final trench is dug. Now to wait for pay day so I can buy gravel and more block. 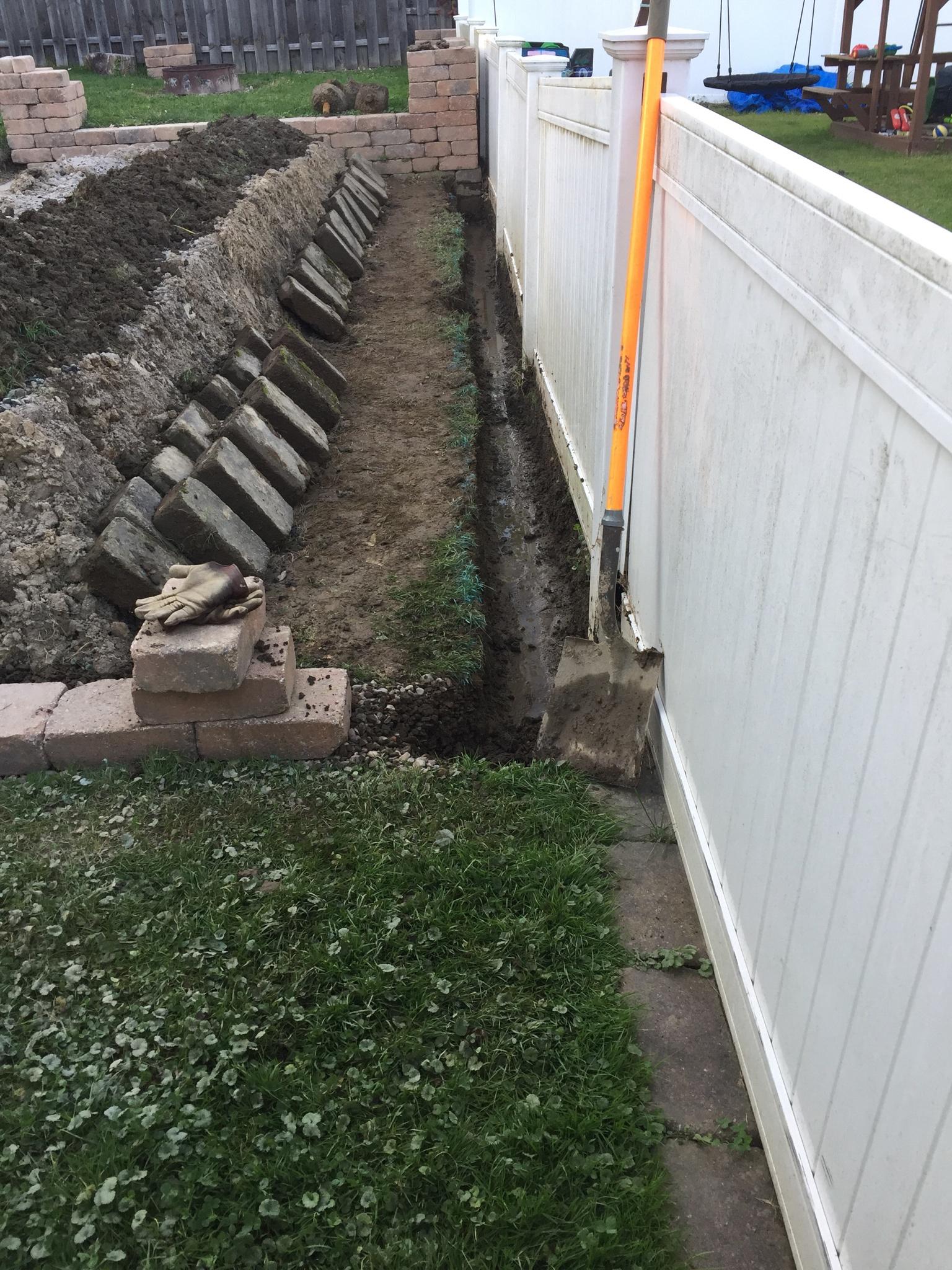 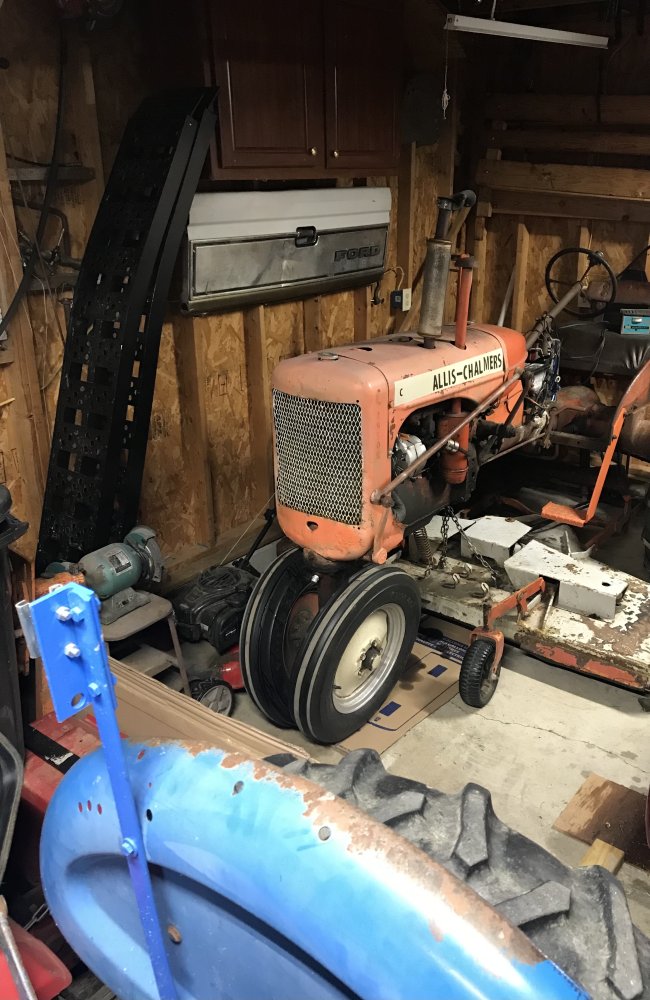 Put the allis away in the back corner of the garage after blowing all the grass from under the belt/pulley guards and greasing it. Did the same with the lawn deere but its not put up, still will need it to move trailers around and maybe run the areator over the yard after the next rain.
Last edited: Oct 11, 2022

I think a hawk took one of my hens.
She never came home Saturday.
My wife found a pile of feathers outside the pen were they norm hang out.
The rooster way very talkative all day Saturday too.
The others have been spending a lot of time under the coop too.

She still hasn’t shown up, so I’m guessing a hawk got her.

I replaced the broken chute on the 2 stage snow blower. Discovered a crack in the impeller housing cover while doing the chute replacement. I bought some JB Weld for plastics in order to attempt to repair it. I figure opening up the crack a little with a rotary tool, rough up the area, and clean up the area real well will lead to best success. Making sure the JB Weld has the best chance to adhere to all surfaces seems to be the best approach with a couple of stop drill holes at the ends of the crack. If not, I'll have to pay the $43 for a new cover.

If it's HDPE like a car bumper or whatever the soldering iron style plastic welder from Harbor Freight would be much better than glue as nothing sticks to HDPE... the kit comes with some stainless screen, sink that into the base plastic and add some extra (it comes with way more than you can use with the life of the soldering iron...). The thing just takes patience, you can't push on it at all, the copper tip and 6mm threads on it like to break (and eventually the 3 screws holding the heat part to the handle will pull out) so let the heat do the work, but for $16?

Here's a picture from yesterday after I finished all the pond mowing I'm going to do, well I think I ran the riding mower around it for an hour after that... should have taken a before picture but the whole bank(both sides) was 4' reed canary grass with some teasil, thistle and blackberry mixed in for good measure... inside bank is around 6' high , outside is 1-3', it's fed with the drainage of the 10 acre field next door and the french drain along half of the property line (that's where the T post is). It hasn't rained since June so been dry for a while... the left side of the picture has a flat top for a riding mower but I ran out of dirt when I dug it out last, hopefully dig it out further next summer... the tuft I didn't mow is cat tails I left just for fun... 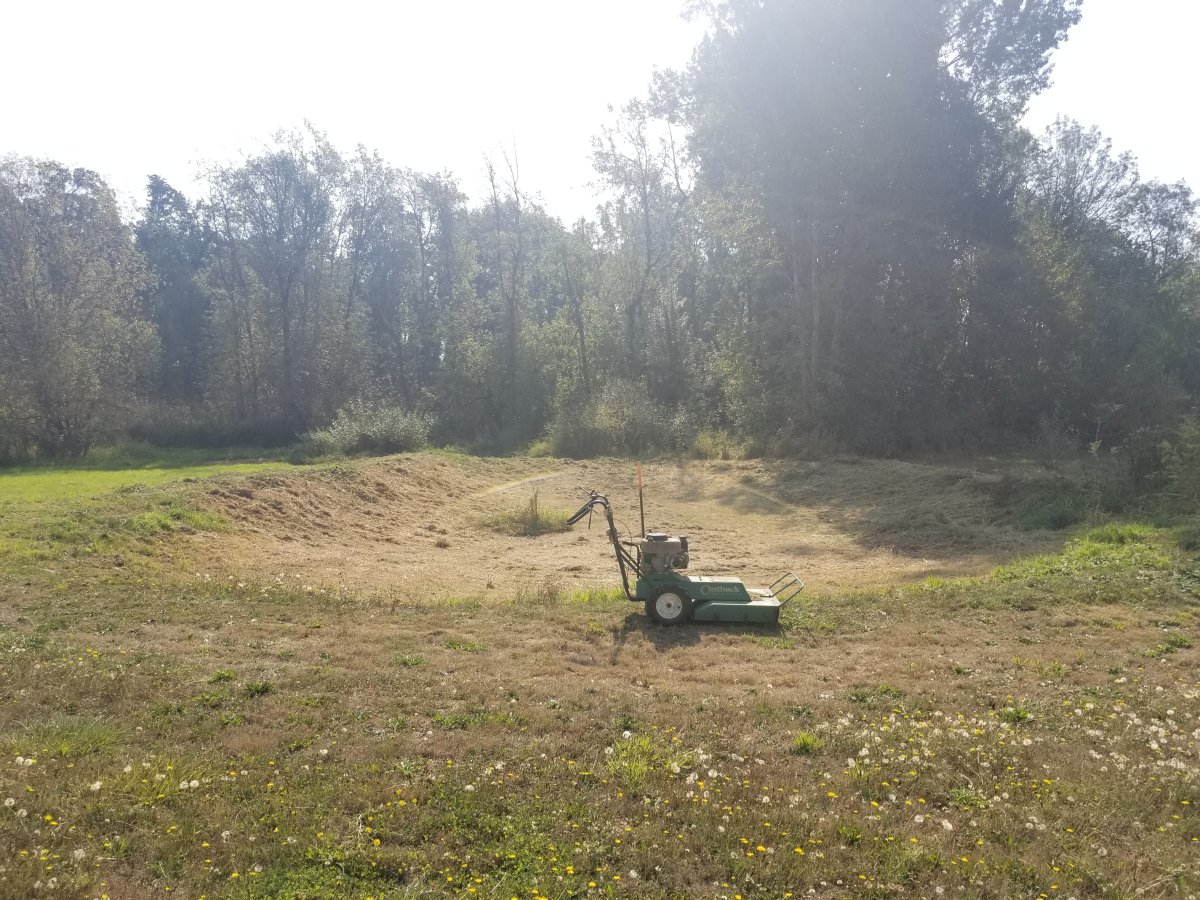 @scotts90ranger I don’t remember seeing any markings to indicate what kind of plastic it is. I’ll double check in case I missed something. I need to take the housing off anyway so I can get at both sides of the crack. So I’ll check then.

EDIT: I saw no markings identifying what type of plastic the housing or the chute is made of. So I stuck with the original plan and will hope for the best.
Last edited: Oct 11, 2022

The last of th Chard and rainbow carrots came out today. 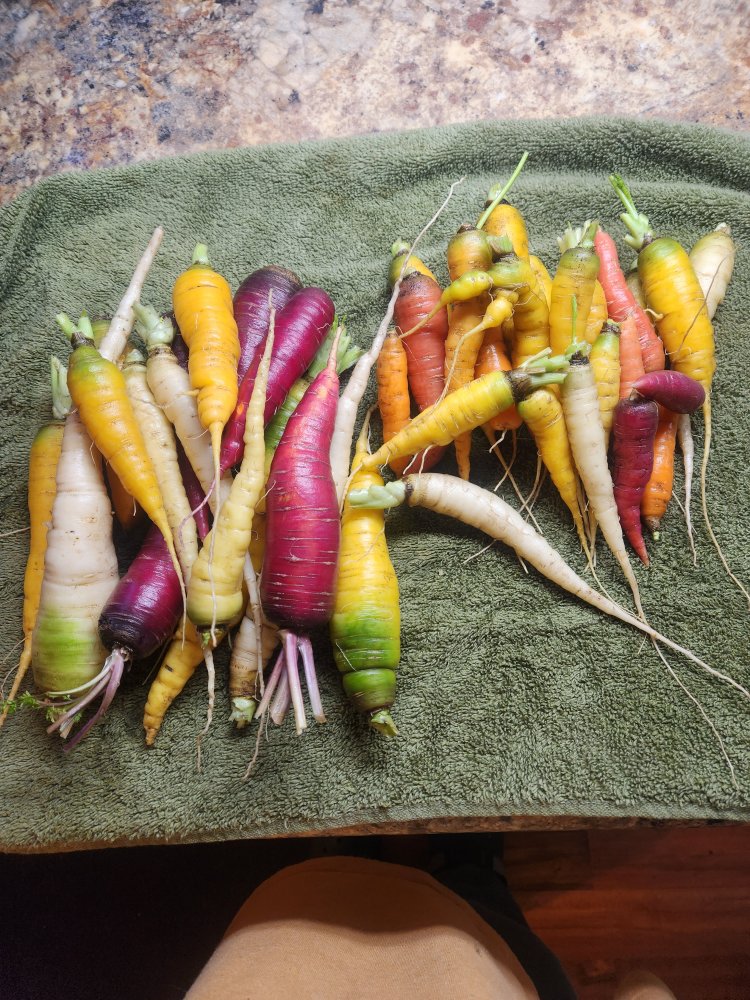 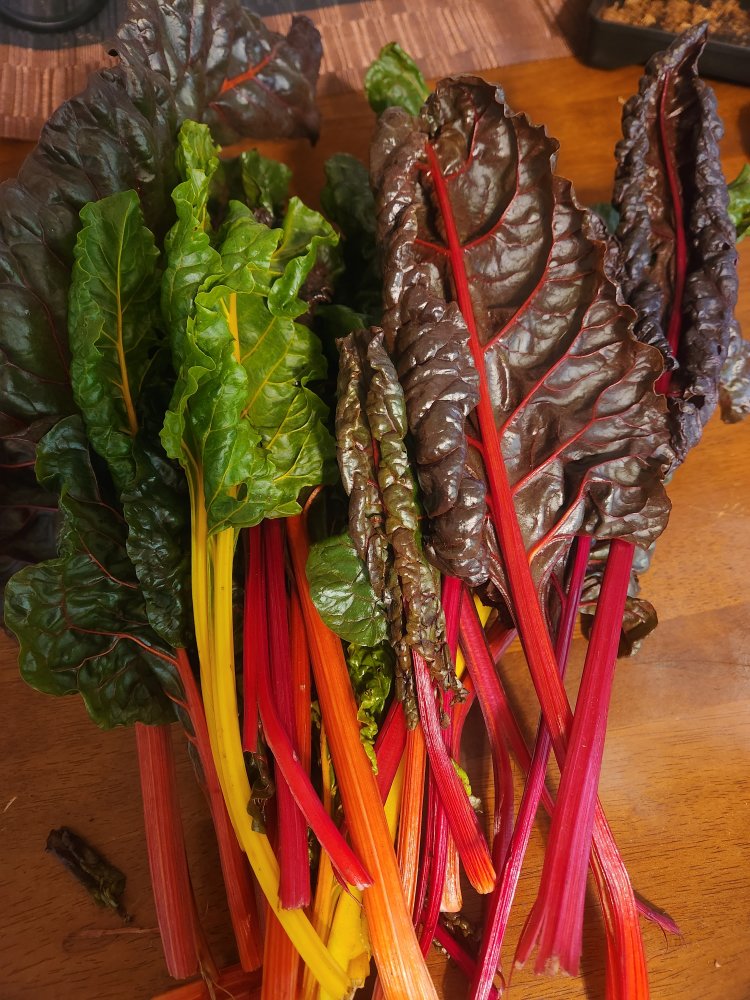 I never did find a way I like Chard... last try will be to stew them down with a smoked turkey wing. The rainbow carrots are awesome slow roasted in the oven with a little oil... salt and pepper.

I have enough tomatoes to do one more batch of salsa and I also have Brussel sprouts to harvest yet.

The final foundation and wall is set in place. I do need to reset the end wall. For some reason, it's a bit askew. Better now than later. Anyway, aft that is corrected, the rest will happen pretty quick as long as my bank account can afford it.

Oh, I need to get a new 3# dead blow hammer. My current one is completely split on one side now. I can't complain, I've seriously abused that thing pretty badly since I bought it. 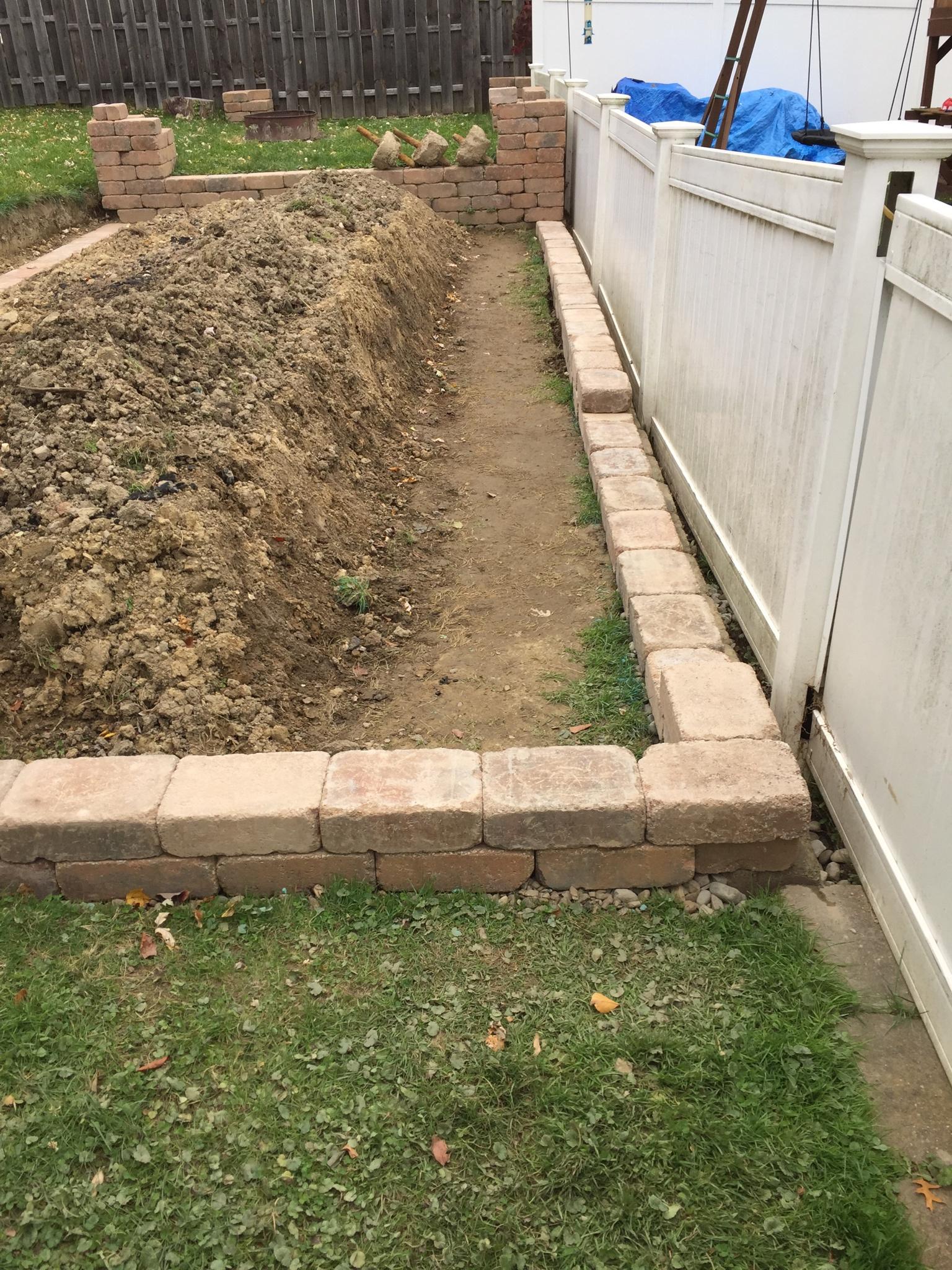 That's a nice looking garden space. Mine is way less refined... but it grew really good for the first year. It only gets better from here.

I think I'm going to do a few more things in grow bags next year... I had pretty good luck with them. I want to try a couple with potatoes. I will say they require a little more water then growing right in the ground.

Uncle Gump said:
That's a nice looking garden space. Mine is way less refined... but it grew really good for the first year. It only gets better from here.

I think I'm going to do a few more things in grow bags next year... I had pretty good luck with them. I want to try a couple with potatoes. I will say they require a little more water then growing right in the ground.
Click to expand...

I'm making good use of a section of the yard that rarely gets used for anything because the lower section stays wet and it's on a slope. It will level out the ground, and the standing water just below the surface should wick into the garden bed and help keep things watered. At least it sounds good in theory.

I'm also hoping it will help the neighbors on the other side of the fence some. Their yard is wet all the time. Some of it is self inflicted since they had a pool put in right across where the water would run and our hill is littered with natural springs all over the place. There is at least three on my property. Two of which are under the house and one along the back fence. When I put in the section with the fire pit, there was a couple times it rained while I was doing it. The water coming into the back trench looked like someone turned on a hose, there was so much water flowing.

The section of the wall foundation I just finished completely filled with water after the last rain we had and there was a thin, even layer of water in the trench when I dug it. I used it as a level to keep the the depth on track as I dug it. In any case, I'm hoping to slow the flow to help the neighbors out as well as helping to keep the garden watered. Hopefully, it will be a win - win for both of us.

The other reason I'm putting so much time and money in this is because I only want to do this once. Both sheds and the fire ring area were done the same way and are holding up well. The one shed was done 10 years ago and has not moved as far as I can tell, The other shed about 5 or 6 years.

Getting everybody ready for the big dance. 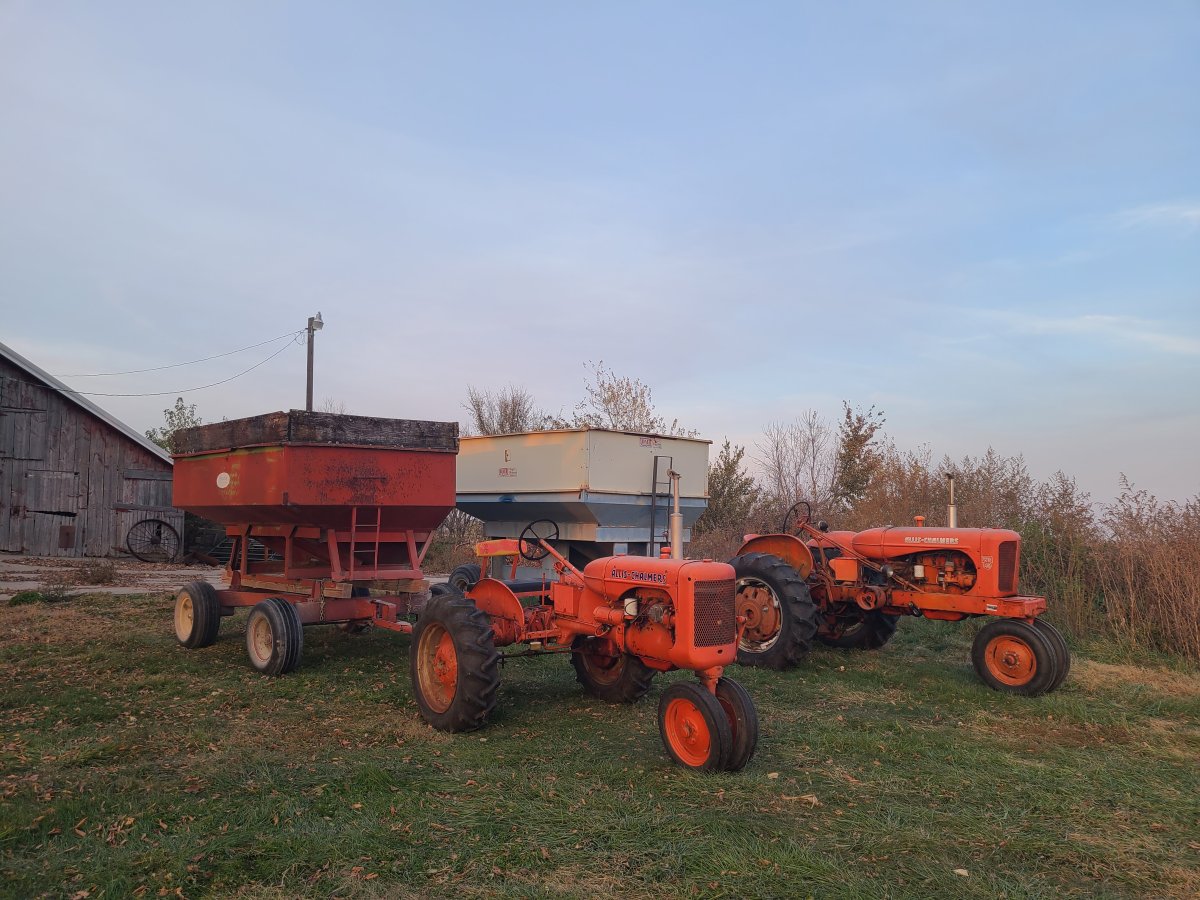 I got the end wall and sandwiched two layers garden cloth between the base blocks and the next row. The first layer will get sandwiched between the rows two blocks up with another layer to do the same with the next two rows with the final 5th row holding the inner and outer cloth layers in place. The idea is to prevent soil from washing through the block and the multiple layers adding a bit of resiliency in case one of the layers gets a hole in it. Being that this project is a bit of an experiment, I'm not sure how well it will work. When I did the fire pit area, I didn't have to worry about garden tools or tillers. So, those blocks got a layer of gravel between the block and the garden fabric with a layer if 1/8" wire mesh between the gravel and the cloth to minimize wear an tear. I don't want to chance ripping out wire mesh or pulling gravel up into the soil bed. So, this is the best idea I can come up with at the moment. 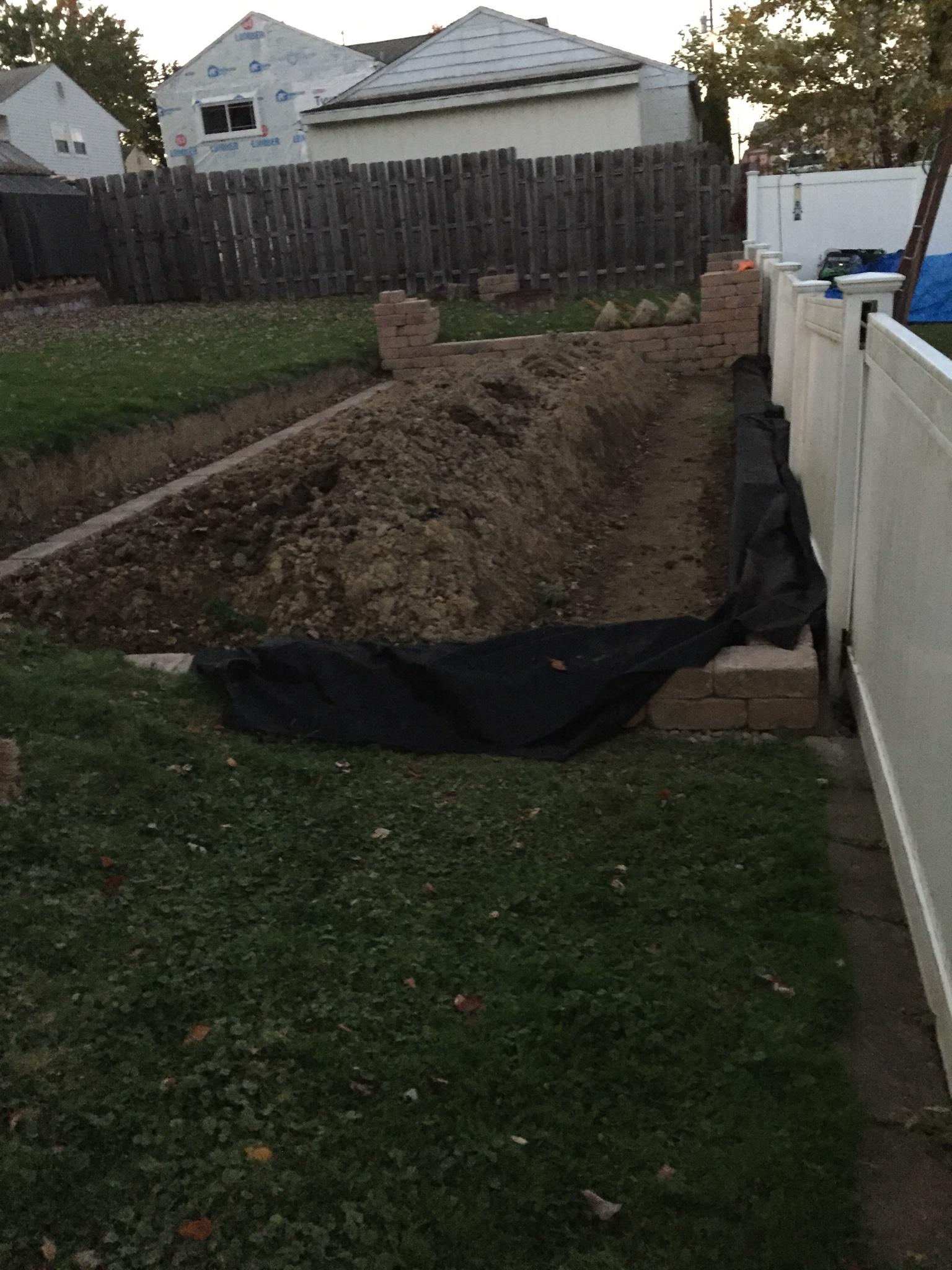 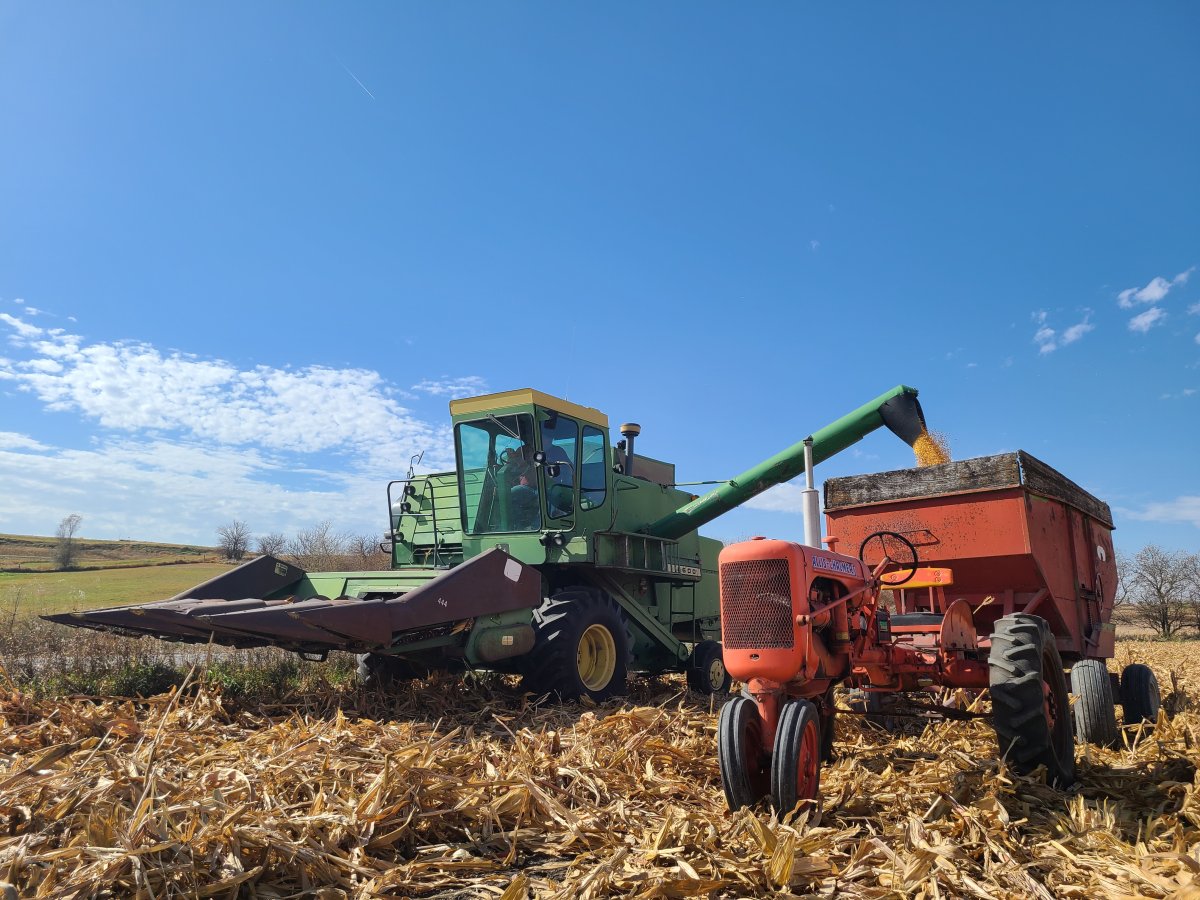 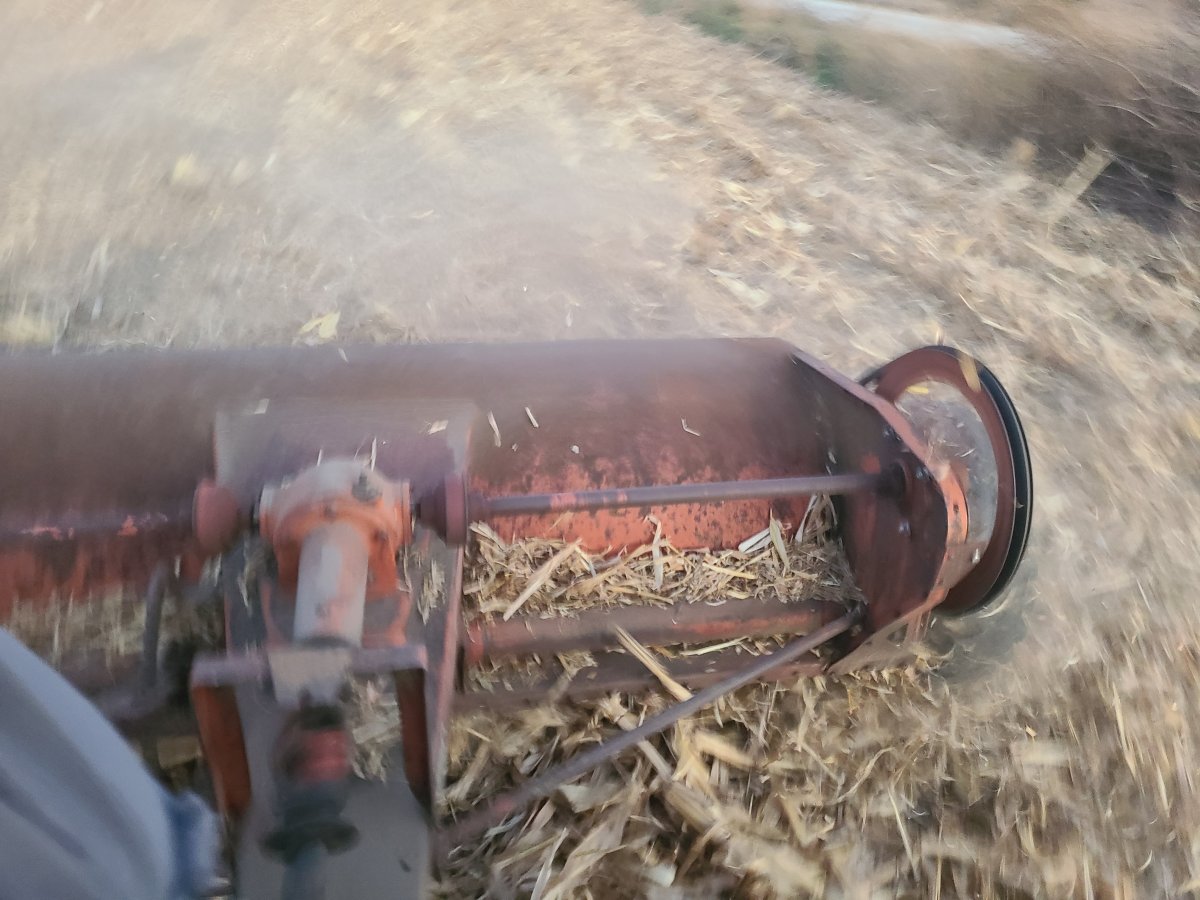 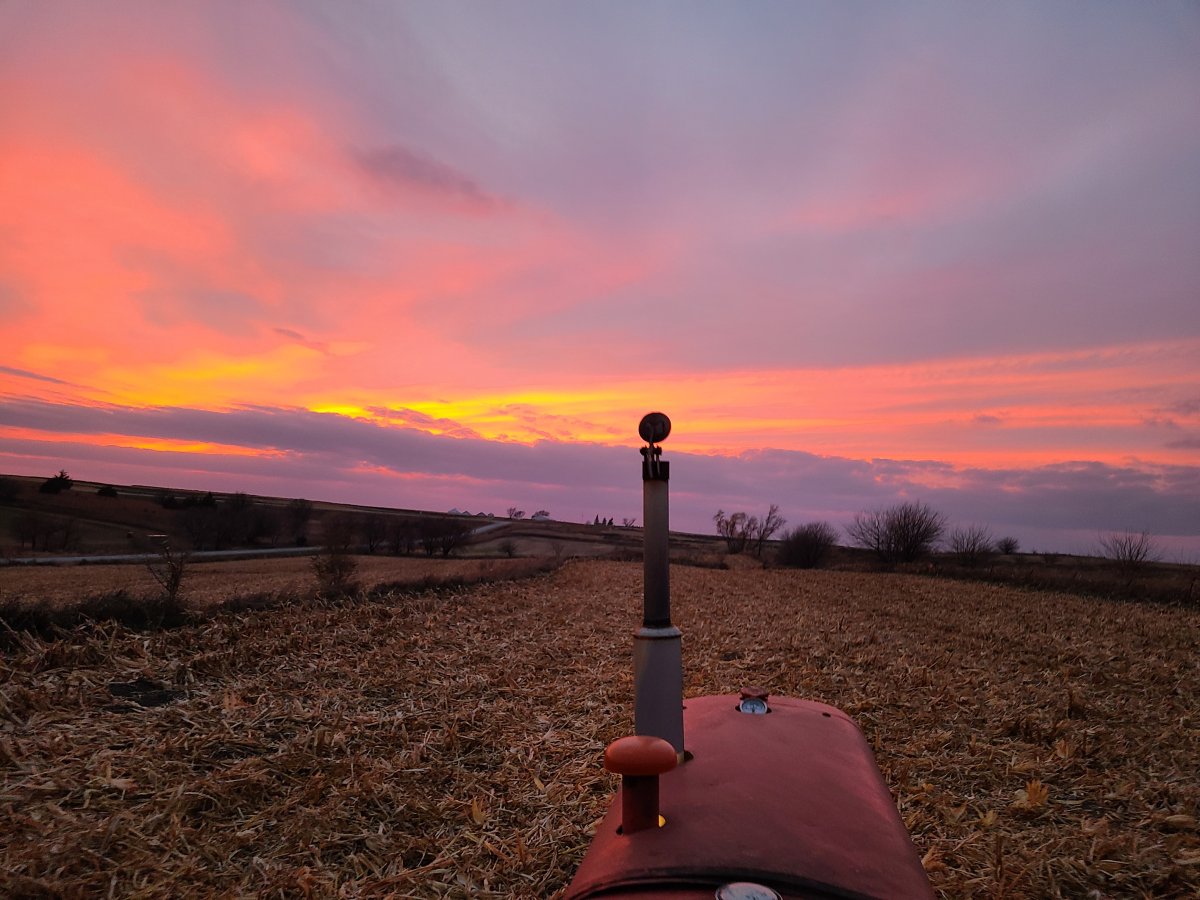 Blew the cobs out of the '45, going uphill I had a faint flame out the exhaust about a foot high. 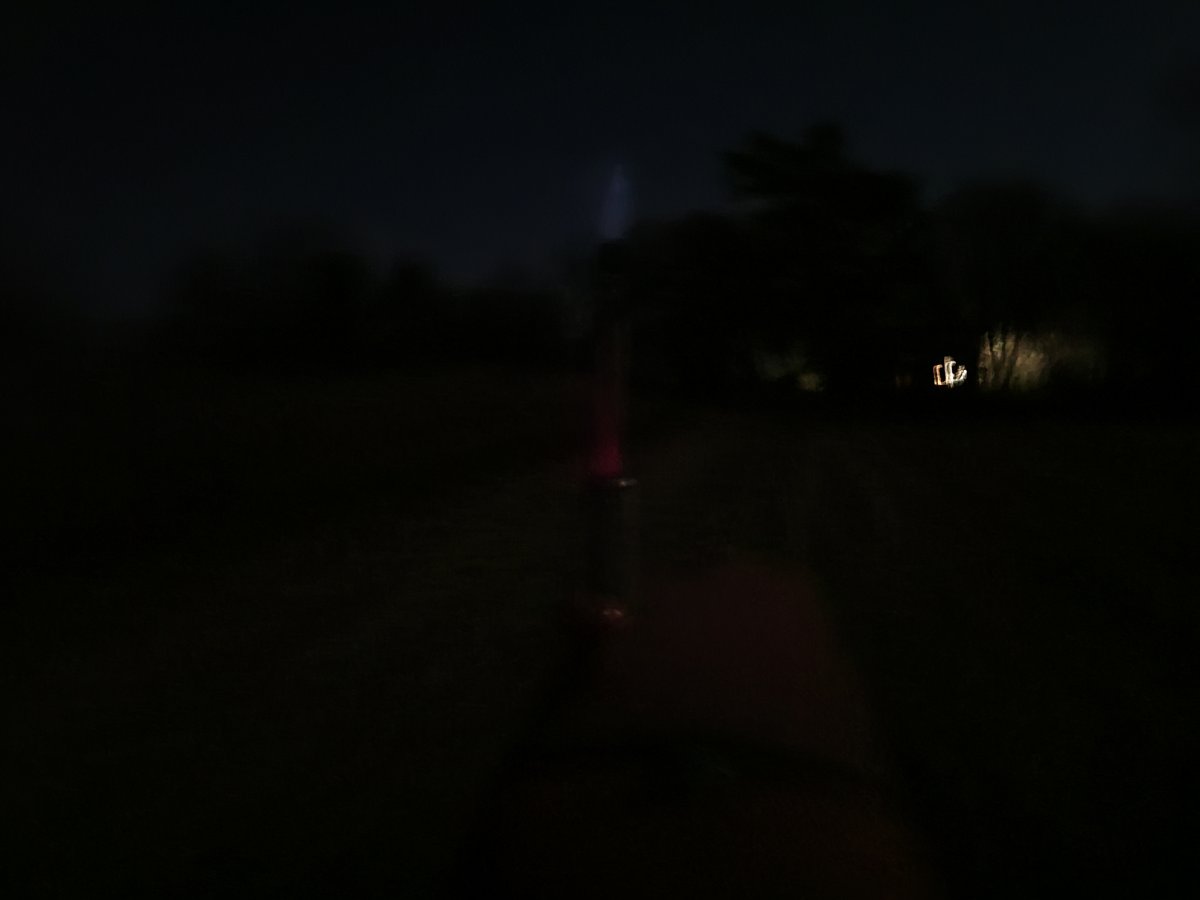 Not much to see on the garden at the moment unless you like seeing pictures of dirt piles as the dirt is getting broken up and amended with chopped up leaves from the trees. Due to the rain, cooler temperatures, and fog, that has been on hold until the dirt dries up enough to work it.
You must log in or register to reply here.
Share:
Facebook Twitter Reddit Pinterest Tumblr WhatsApp Email Link