I have read another help thread where (AllanD) explained the role of how the valve works. My install is a bit different to stock. 83 with dual tanks, and the cab switch does control the valve correctly F & R.

However, the rear tank will not switch in the valve and only stays to front. to get the truck running we took the line for the front tank and hooked it to the pump directly. Pump is mounted to out side of frame 5 inches for the frame mounted valve. there are no return lines to the tanks, all lines are just direct to the carb. on the thread I was reading Allan explains how the valve runs a return system also, if the valve isn't hooked to a return will this play havoc with the valve?

If so, can i buy a non return line valve system to keep the dual tanks in operation? Does the return line have any affects on the fuel system? and haven't got the fuel gauge reading correct yet.

Yes, the Ford 6 port dual tank switch with return lines will work without return lines hooked up, so if its not working then its broken or not getting 12volts

You can replace it with a 3 port universal 12v dual tank switch, like this: https://i.ebayimg.com/images/g/pBcAAOSwMXxferzE/s-l225.jpg

The dash switch should have 6 contacts
3 on one side and 3 on the other, called a double pole, double throw switch

There is no connection between the two rows
One side does the 12v to the switch
Other side does the fuel gauge change over
The center contact in each row is either connected to the contact above it or below it, depending on switch position
But not to any contacts next to it

hi ron, thanks for the answers.

The pump is not wired to the key on, it is manual switched on in cab, and there are no in tank pumps. front line and rear line to the valve ports, then the out to the pump.

i was reading on that switch/valve you linked to, and was wondering if that valve would fix the problem, but how will the tank(s) levels be sent to the gauges? or are they wired directly from the (throw slider) tank switch in the cab?

So your switch doesn't look like this one: https://i.ytimg.com/vi/VP7m_WmPQ2Q/maxresdefault.jpg

That switch does both tank selection and gauge selection

best pic i could find.... bottom left section beside the cig lighter hole is a slider that controls the tanks. 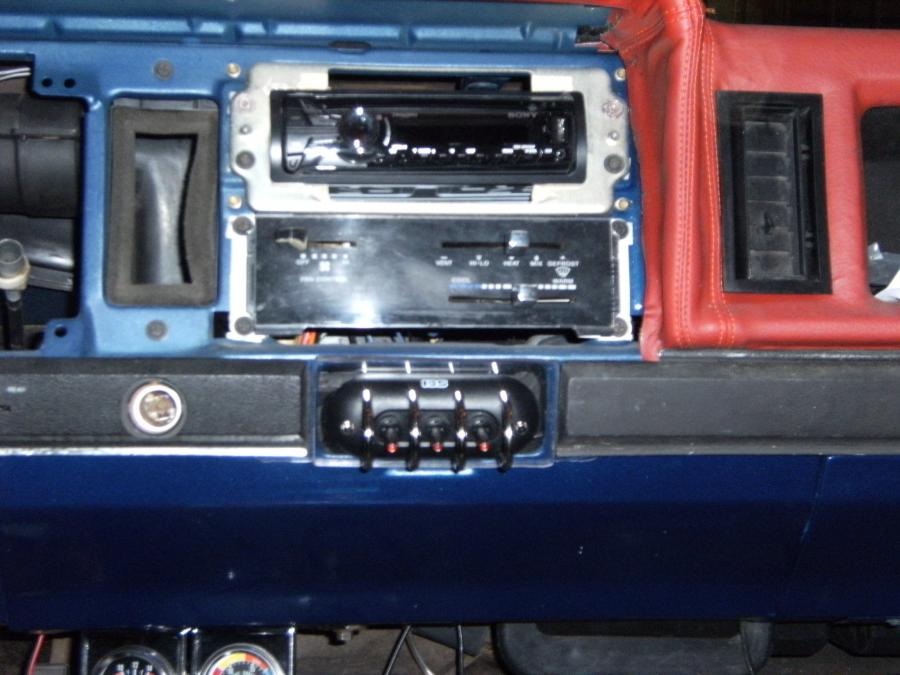 The carb setup is different then the efi iirc...


My go-to for carb stuff is bc broncos...

Seen the slider type in the climate control panel, up/down MAIN and AUX but thought they were gone by 1980's, lol
Never looked at the back of those to see how they worked, I assume they were electric, and should have similar 5 wire hook up
2 wires for 12v on/off and 3 wires for gauge hookup

Can't really see it from the picture, except the edge of what might be a left/right slider
You will need to see what wiring is on the back side of that switch 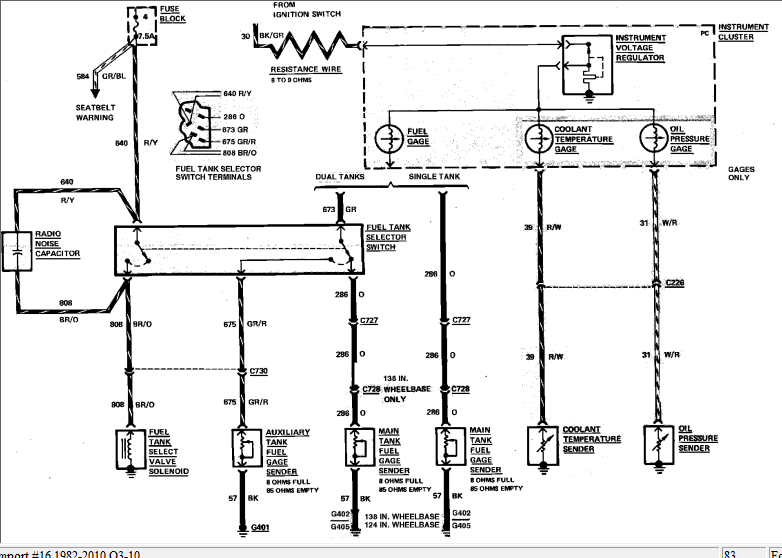 Lower left is the fuel line selector, "select valve solenoid" so just 12v on or off selects the tank connected to the engine's fuel line
Can be 3 port or 6 port(with return lines)

So it is an electric double pole, double throw switch, just in slider form instead of toggle like later models

Since there are no electric fuel pumps in the tanks there should just be 2 wires coming off the top of each tank, one Ground wire for the sender, and one "sender" wire that goes to the dash switch, get each "sender wire" color and you should see that same color at the dash switch

thanks for the wire diagram. that should help narrow down what needs to happen for the sending unit. or how i should be looking at it. I will take the valve off again and see why it is not switching. I know i did test it way back when i had it off the frame. cheers thanks, and if it helps any here are the 3 pics of how i have it. the pump is on the out side of the frame and the valve is just mounted on the other side of the frame. room is a bit limited as this frame has been completely boxed in, so it made it tricky to mount stuff to it.

The solenoid valve should make a "click" noise when it has 12volt and ground
It has no Polarity
If it has 1 wire connector then thats for the 12v and the body/frame of the solenoid is the Ground for the coil inside, so needs a good bare metal contact to a good ground point

If it has a 2 wire connector then one wire is for 12v and the other for the ground, doesn't matter which is which as long as it has both

Upon examination of the lines i noticed that the rear tank's filter has fuel in it. It should not have anything in it as this tank is 100% empty. So this leads me to wonder if the switching soliniod is stuck 1/2 open back and front. and fuel pressure forced fuel into the back line. This sounds plausible. I will just bite it and for the few dollars buy a new fuel switching valve as this one is close to 40 years old. Now that i know a return line is not needed it will be easier to plumb in. thanks for the help.
You must log in or register to reply here.
Share:
Facebook Twitter Reddit Pinterest Tumblr WhatsApp Email Link