Bought the truck a few years back, had some vibration at speed, figured that the well worn tires were unbalanced. Looked hard for a center carrier bearing, found a NOS one at the local driveshaft shop. Felt the same as old one, but replaced it anyway.

Bought 4 new tires, got worse. Multiple attempts to get the tire shop to address the issue. Balance machine problems, tires out of weight spec, tires not round. Replace with another brand, same vibration issue. Found BOTH axle shafts bent. Ford used cheap, soft steel that year. Bought best axles from Rock Auto. Still vibrated. 3rd set of tires now! Looked for one piece driveshaft, but the western chain junkyard PnPull damages all of them with their forklift when moving them.
Rotated driveshaft to all 8 positions on pinion plate, no improvement found. I pulled the shaft, and potted the carrier center bearing to reduce the movement, as both bearing assemblies I have on hand have developed a lot of movement in the rubber. (Had to do this on my 1st Gen Talon. TWO carriers, 3 shafts.) Made a noticeable difference, but still not good enough.

Replaced 7.5 rear axle assembly with 8.8 rear. Replaced all three seals with axle assy in the bed. Big mistake, I suspect. Rear rotated/fell onto pinion shaft with plate/nut off, and shoved the pinion inside rear. May have rotated shaft when this happened, and I suspect the gears may have "jumped" a tooth or two.

QUESTION: How is the pinion plate aligned to the differential assembly for driveshaft balance alignment?
I haven't seen any info on this, anywhere, which seems odd, as Ford is careful to matchmark the driveshaft location on the plate.

I'm thinking the 1/8 rotation between the original and the 2nd bolt pattern is not a fine enough change, and I should be pulling the plate and rotating it a spline or two to look for a better alignment. I should probably count the teeth on the pinion gear and calculate the rotation per tooth, to get a better idea of what may have happened when it got bonked.

BTW, the tire shop is America's Tire. I suspect they may be selling "seconds", as it seems odd that so many of multiple sets of tires in two brands have an out-of-round condition. I was thinking of having them shaved to eliminate that as a factor in getting a handle on this vibration, but after measuring the tread depth, I realized that they would hit the wear bars before getting them round, and liability concerns would stop them. Tires wore pretty quickly. I'm wondering if the roundness problem might have been a factor in them wearing down so fast. Not going back, as they had a limited selection of the old Ranger tire size, 225/70-14. I did swap a set of 15" wheels/tires from my '00 4x4 Ranger onto the rear for a test drive, but the vibration was about the same.

I'm thinking the vibration problem is pinion plate misalignment, and/or driveshaft carrier bearing movement, but I'm not knowledgeable enough on the subject, and I hear that this sort of vibration problem is fairly common on Rangers. Is it only the Supercabs, or do the other models also have a similar complaint?

There is no special gear timing in the rearend, you just put it together. There are gear lash adjustments, but what you did should not affect that if you tighten the nut back properly.

It is good practice to mark the driveshaft before taking it out, but sometimes with changes over the years, that is lost or no longer valid. If you think you have a driveshaft inbalance, you try it in different positions like you did to see which one is best, and then use that from now on.

The truck vibrates at freeway speeds. Becomes noticeable above ~50mph. Swapping the rear tires from my 4x4 didn't really change the feel, so it would appear that is not a big part of the problem. Moving the driveshaft position on the pinion plate accentuates the vibration. I have not tried the second pattern on this rear yet. That would give me a 1/8th rotation change, but I suspect that might be too course. Have to clean the threads first. I'm still looking for info that clarifies the original alignment of the plate/driveshaft to the differential. The factory MUST have a method/process to follow for this. No way would they bother to spend time/money marking it in the factory if it didn't matter, and there is no way they would fumble around trying to finalize a setting as I am doing.

It is somewhat of a buzzing feel. Makes my head hurt. The driveshaft has been to a driveline shop, and they assure me that it is fine.

I think you're overthinking it. I can't imagine the pinion flange takes a particular alignment relative to the pinion gear. How would you know how to align it after a regear? Similarly, I was always taught that it's important to maintain the alignment of the pieces of a driveshaft when changing the u-joints, but I've never worried about the alignment of the driveshaft relative to its input/output. Think about it: a rear with a normal yoke, instead of a flange, would only have two possible orientations. That's no granularity of adjustment whatsoever, but all those vehicles drive fine.

If one particular driveshaft-to-flange orientation appears to produce less vibration, then by all means run that one, but I would begin to suspect something other than a balanced driveshaft is responsible for the vibrations. Does either the transmission output or the pinion flange have play? Engine/transmission mounts? Steering/alignment hardware?

Sounds like a carrier bearing rubber probably has deteriorated some! Had the same issue on a ranger and Nissan hardbody! Something to look at.

you especially feel driveshaft issues at take off, when the most torque is applied.

can you mount a go-pro video camera under to watch the driveshaft while moving. or, put it on jack stands and secure it so it won't move and let the engine idle itself up to speed so you can watch the driveshaft from teh safety of the side of hte vehicle. this is not a particularly good way to do it if you cannot secure the truck from jumping off the stands though i have done it to watch for out of round issues.

talking about that though, if you take the back wheels off put it on the jack stands, and than run it up with no back wheels, does it still vibrate? that would tell you where to look.

Probably still vibrate I would say! Check the center bearing where the two driveshafts come together! Check the rubber bushing the bearing rides in! It will cause vibration issues. If it’s good, check for vibration in the driveshaft! Kinda like you mentioned above, just not by yourself! Go pro best option in my opinion!

Don’t get me wrong had 89 ranger ext cab didn’t get a chance to figure it out! Changed out all u joint’s and center carrier bearing and made no difference. Going to work one morning about 7 am and a mini van ran a stop sign! T-bone the van and they took off! Had to climb out the passenger side. Wasn’t hurt but my ranger was lol! Totaled my little red danger ranger!

You can get one of these from Harbor Freight and check your angles. 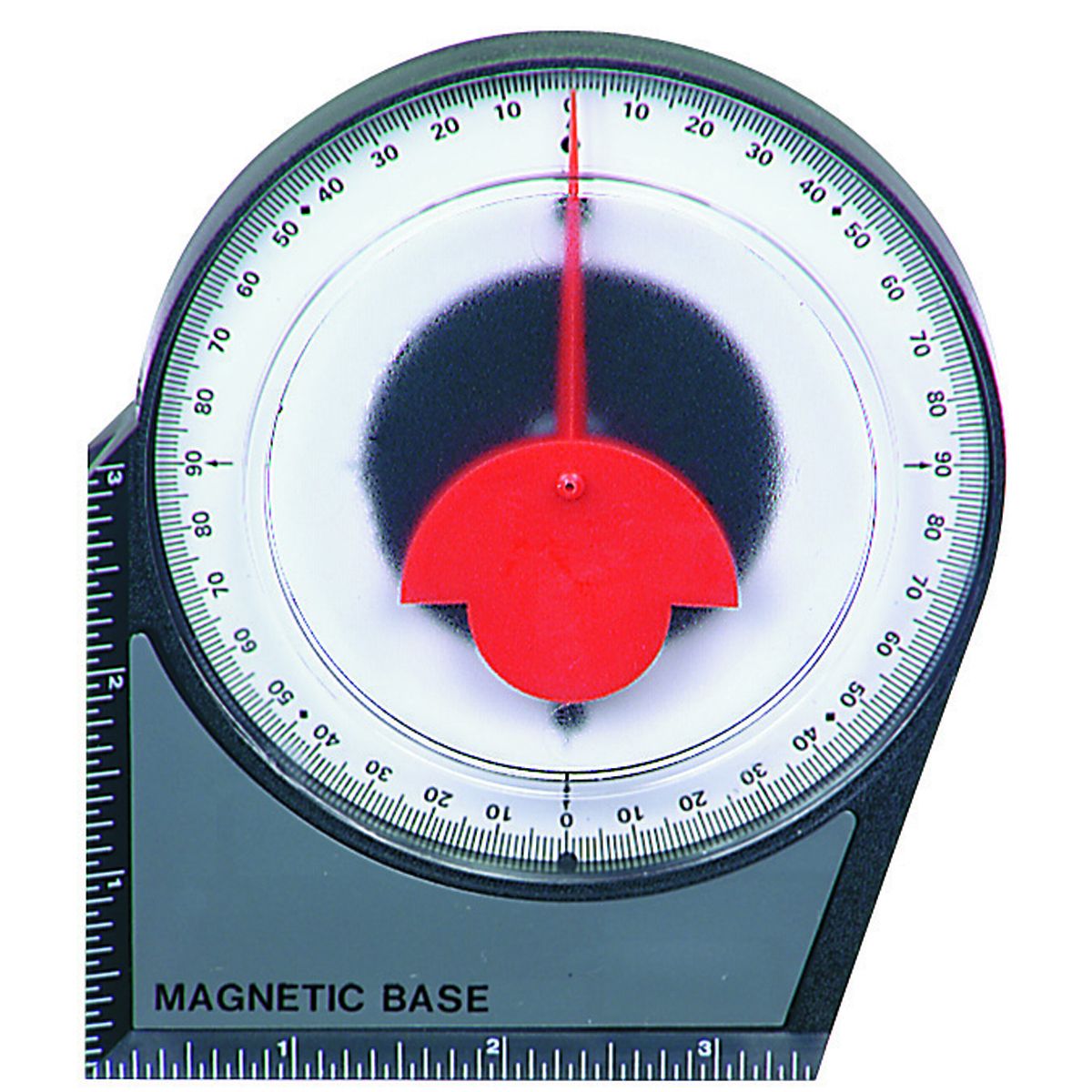 The "pinion plate" that are you referring to is called the pinion flange...just so we are on the same page with terminology...took me a few reads to understand what you are referring to. There is no proper orientation of that piece to the pinion gear and none of that assembly is balanced...so in theory your issue should be somewhere else. But, since you have messed with it and replaced the seal, it COULD be suspect since your pinion bearing preload and backlash can be affected by how tight you have the pinion nut. Do you have any slop at the pinion, ie, can you move the pinion in ANY other direction than rotating? in-out, side to side? How far can you turn the pinion back and forth before you feel it engage the ring gear? It is easiest to judge that stuff with the rear wheels off the ground and the driveshaft removed.

Some 2wd trucks came with a big rubber donut vibration damper on the rear driveshaft. My '96 4 cylinder truck had one. Not sure if it was a 4 cylinder only thing or what but I have heard of others having issues with that damper coming off and they simply removed it. Do you have one/if not maybe it was removed?


LeftHander said:
It is somewhat of a buzzing feel. Makes my head hurt. The driveshaft has been to a driveline shop, and they assure me that it is fine.
Click to expand...

Did they balance the whole driveshaft as an assembly? And the "buzzing" feeling, is it something you can hear as well or just feel?

Shran,
I noticed during my junkyard searches for a one piece shaft that the 4 cyl Rangers were the only ones that had that rubber sleeve damper.
There is a very obvious difference in vibration depending on which of the 4 positions (original bolt holes) are selected on that plate. That would seem to indicate that there is some sort of balance situation in play. The driveline shop checked and informed me that the original balance was good on the shaft assembly itself. Bear in mind that Ford always marked the original orientation of the driveshaft on that plate by spraypainting one of the bolt bosses and the plate. My original rear had no visible paint or markings left, and I can tell the trans had been removed at some point, so that was an unknown data point.

bronco ii Man,
the rubber had degraded for sure on that center bearing. Not much rubber there to start with, and I found I could shove it to the side by hand when in place, which wasn't possible when new. I cut away the travel limit rubber ring it had, and filled it with some rubber windshield adhesive. Much less vibration after doing this, but I think it is now over-constrained (too stiff). I'm planning on drilling some holes around the circle to attempt to soften (weaken) it a little, but it probably needs a softer durometer rubber. A few years ago this carrier bearing assy wasn't available, but I now see it showing in the various parts stores. It seems the one that O'rielieys shows on their site has a lot more rubber in the design, so I may order one. Lot cheaper now, too.

Lowspeedpursuit:
"Think about it: a rear with a normal yoke, instead of a flange, would only have two possible orientations. That's no granularity of adjustment whatsoever, but all those vehicles drive fine. "

The spline on the pinion shaft gives quite a range of alignment when first installed.

No obvious slop in the trans or diff shafts. Hmm, not sure about the engine/trans mounts. It's possible they have degraded enough to allow contact between parts when under load. I'll have to take a closer look. I would expect they are original 26 yo pieces!

oh man. thats true. if hte motor and trans mounts have gotten soft and the engine/transmission are not in their proper spots than your driveshaft will not be aligned properly so you could have vibes from the angles being incorrect now. thats common on jeeps