For those who have not seen the other threads, I think I ran my diff low for a while on a long distance trip due to a leaky axle seal. I drove another 200 miles or so, adding fluid as I went. I now have a persistent groan, and I'm 85% convinced it's the axle bearing/seal which I am changing right now. (Lunch break!)

The diff is open right now, and I was pleased to not find a glitter party in there. Just black, smelly grrease. A few small bits of metal. When I first discovered the problem, I had a pretty good collection of metal shavings that were so fine, it seemed like some kind of goo on the fill plug magnet and few metal fragments. I actuall thought it was water in the oil. Much better this time around.

I don't know what I am looking at when I look inside, but here is what I think I see. Ring gear looks pretty good, no signs of significant wear. Ring gear looks a bet worn at the outer edges. There is some heat discoloration at the axle shaft. The inner housing looks like it's chewed up - that seems a little weird.

The input shaft is sloppy, turning freely from 11 o'clock to 1 o'clock. Maybe this is how it was before, but can I adjust this out? 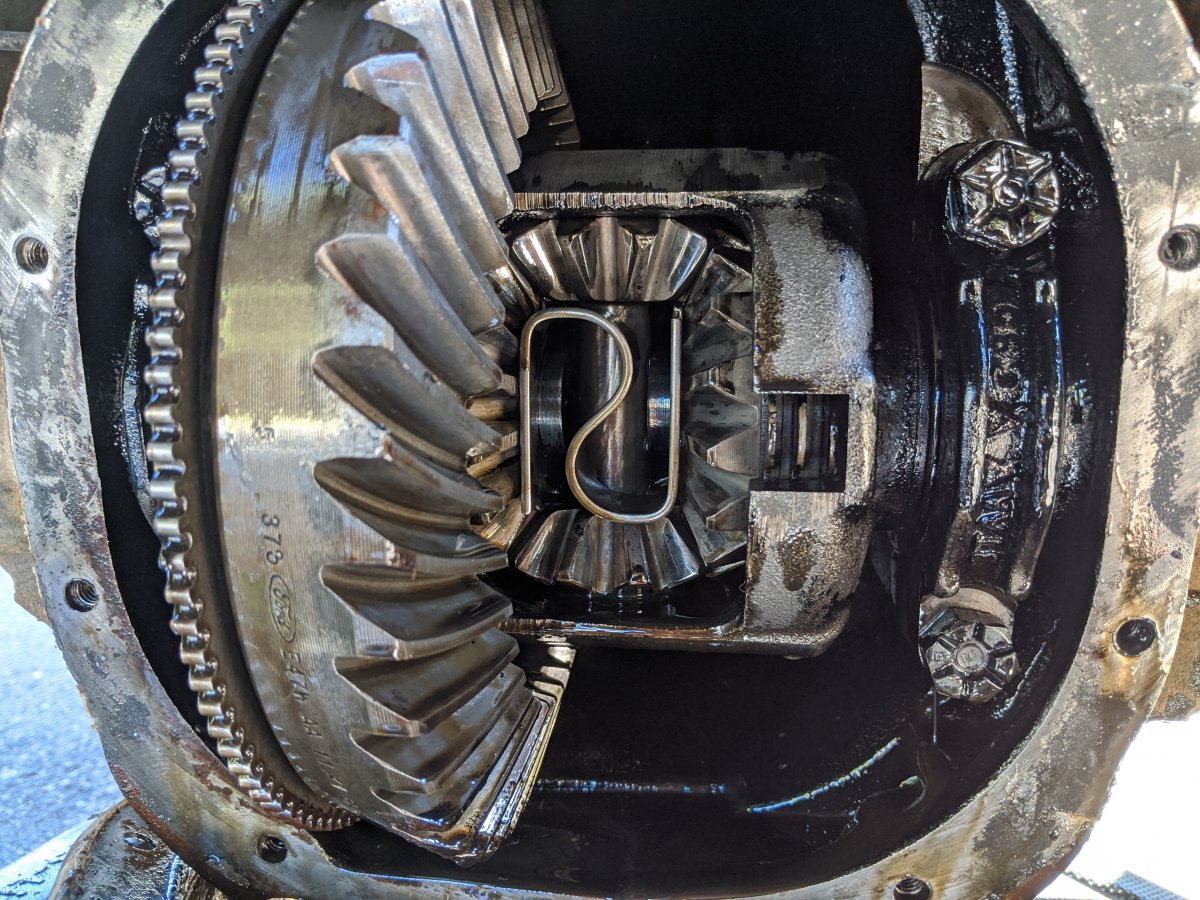 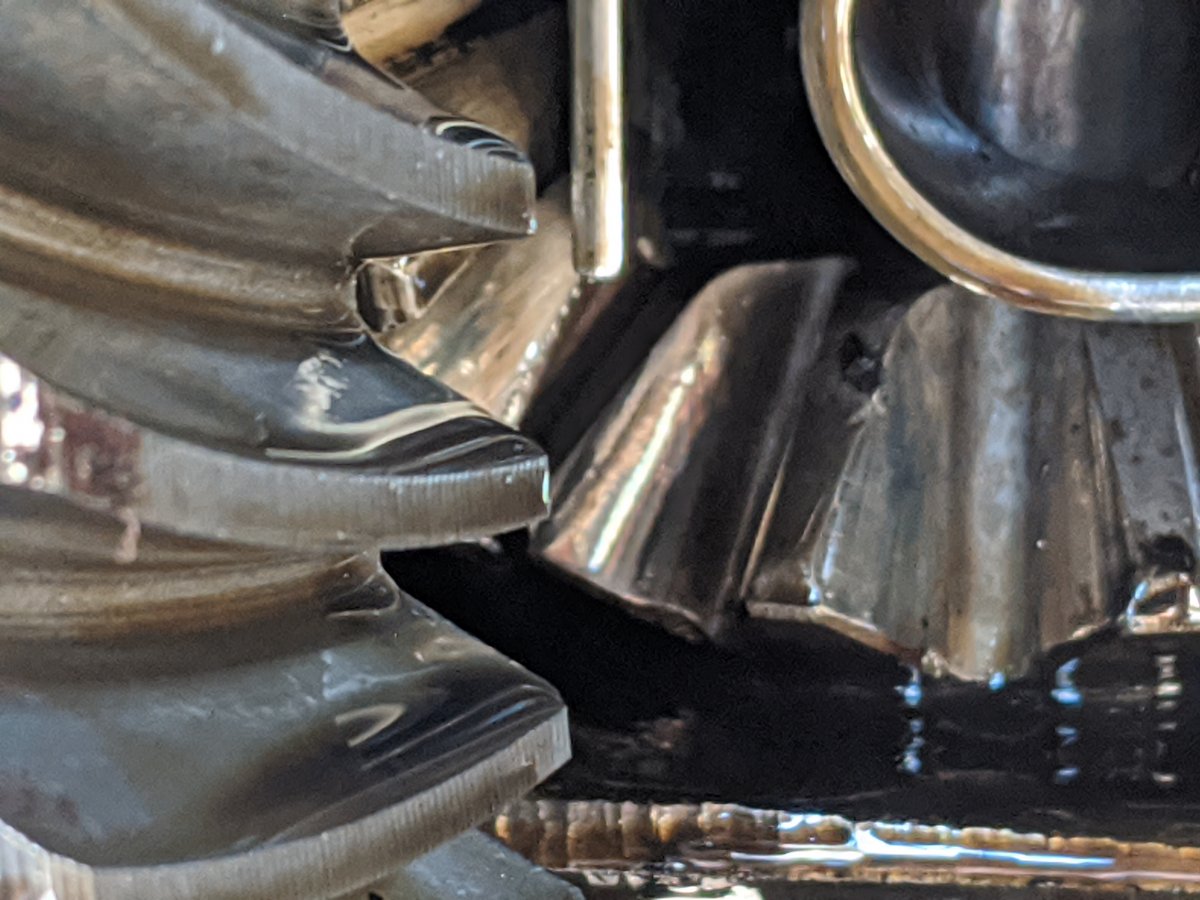 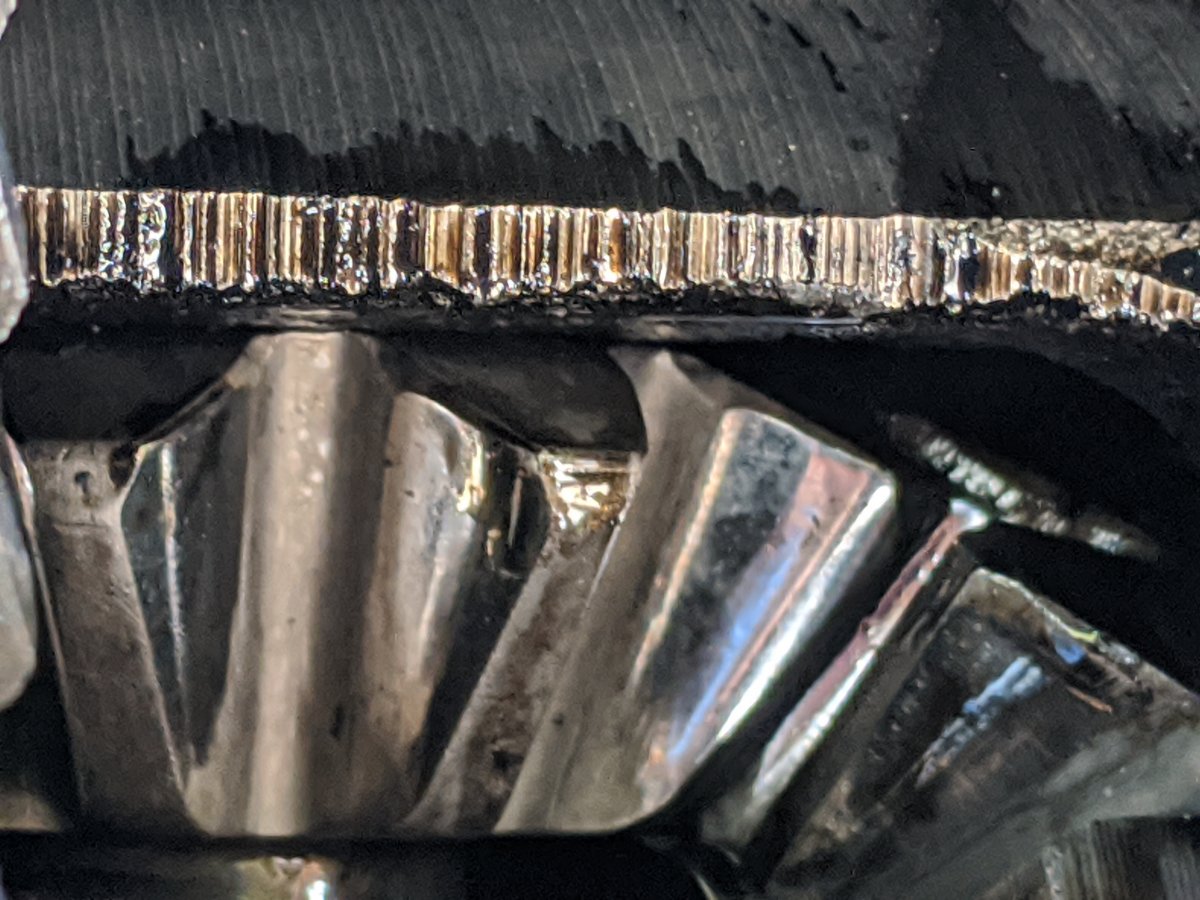 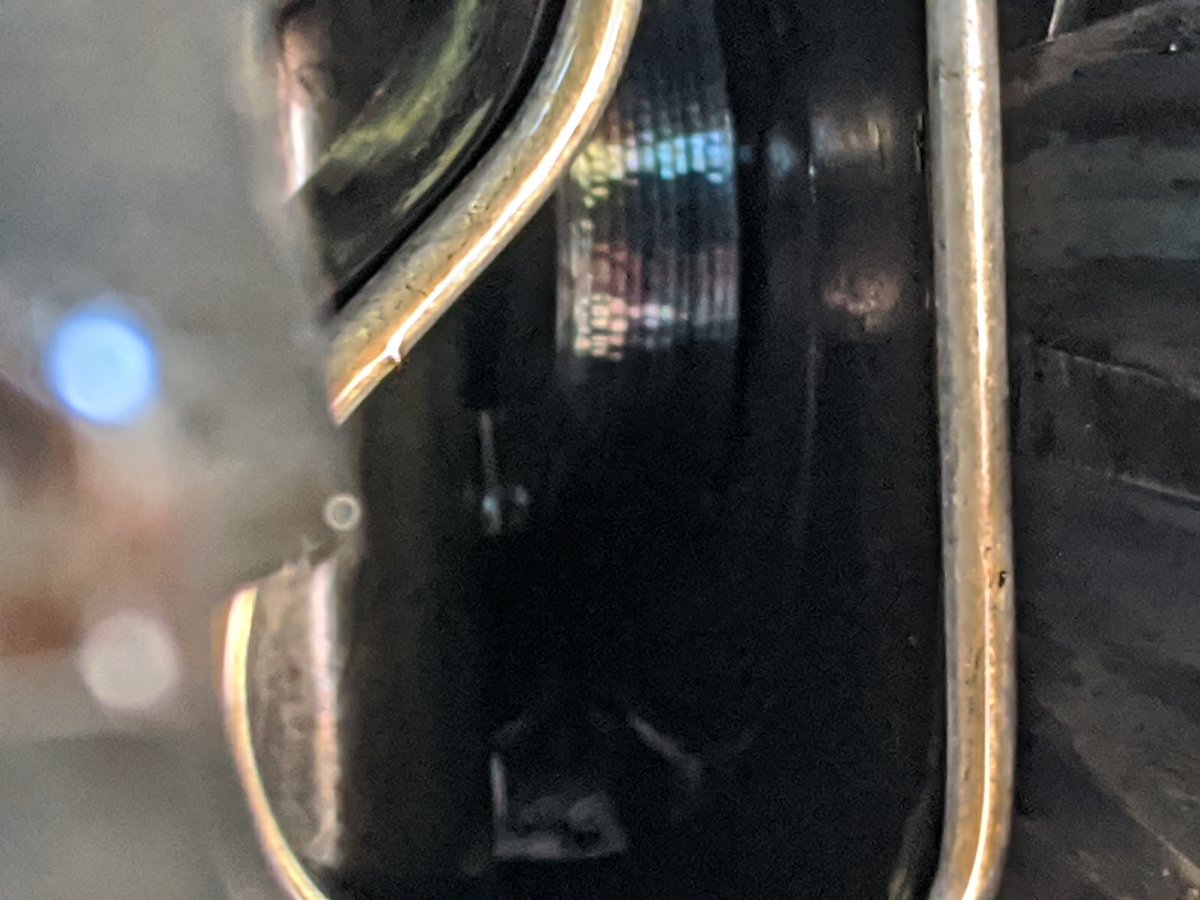 the bluing on the axle shaft is from the manufacturing process. they come new like that.

I'll defer to the "experts" on the other stuff.

All of the gears look just fine, my guess is one or more bearings is going out, I haven't had enough failures to guess which one...

So... Would a failing bearing cause a lot of slop? Because it's sloppy.
I am guessing that if yes, it's because a bearing is not holding something in place and keeping gears from engaging as positively as they should. Yes?

I'd really like to be able to diagnose and address it. Aany help is greatly appreciated. Here are some clues:
I think I can eliminate the pinion bearing as the cause of the slop. When I had he driveshaft off, there was no noticable in-out or side play, but it will rotate freely form about 11 to 1 oclock. I'm only exaggerating a little. The in-out play of the axles seems a little excessive (Will measure tomorrow) Turning the wheels with the rear in the air the first few times, the opposite wheel moved in the opposite direction. Later, it began behaving like an LSD.

Can I adjust out the slop by adjusting the backlash?

Trying to do the axle seal, could not figure out how to get the C clips out. That pin is stuck, stuck, STUCK.

What do you think is the deal with the carrier housing? It looks all chewed, and I can't figure out what would have done that.

Since I know almost nothing at this point, I have a hard time figuring out what to do when someone says "It sounds like the ramaframmitz grommets." If it's possible to say more about what to do in that case or how to further diagnose those g@&&@mned grommets, it might help keep me off of these forums for a minute.

It depends on what you are looking at as far as play. There is some side to side play that is perfectly normal.

The same goes with gear engagement. There is a certain amount of back lash that must be there or bad things happen.

With everything being fine, you can move the gears some and the same with the axles.

Grab your drive shaft near the pinion and push and pull back and forth, then up and down. If there is slop grab an 8.8 from the jy and start over......

Is the pinion going in and out, when you turn it (with the drive shaft disconnected? If so - the crush sleeve is likely 'crushed'. Clearance between the pinion and ring gear should be FAR less than what you describe.

The carrier is a casting. The rough edges are likely where it was cleaned up at the foundry. Or someone wanted more clearance to get spider gears / clutches in/out. There shouldn't be anything gnawing on the opening in it.

At the junkyard now.

Junk yard is probably a good choice. I don't see any carrier damage in your photos. If you can rotate the pinion (you call it input shaft) from 11:00 to 1:00 with nothing else turning, then there is a serious problem. From everything you're saying, my best guess is bad pinion bearings.

The cross pin is held in place by either a roll pin or a screw at one end. If you did not remove that, you will never get the cross pin out to allow c-clip removal from the axle shafts.

yeah, there is a cross bolt on one side, 5/16" head, once it's out the cross pin will slide out either side, unless 4.10's then it might only go one way... From there you can rotate things and get the outer spiders out and maybe the S spring, it's been a while since I've played with a limited slip...

That grinding on the carrier is normal, it doesn't have to be pretty so it's not.

I voted for Kanye

This guy's got a sloppy rear end!

Dirtman said:
This guy's got a sloppy rear end!
Click to expand...

You would know it.

Bolt is out. I’ll have to check if it’s broken at the tip, but I think I would have noticed.
Looked for a rear diff today and there are crap tons of explorer 8.8s, but I’m not keen to do all the work to make the swap. Now is not a good time to learn how to weld.