Diagnosis of a clogged catalytic converter.

A couple days ago I was driving about 80 mph, keeping up with SoCal freeway traffic. Suddenly, I noticed I was slowing down without letting up on the accelerator pedal. I stepped on the pedal a little and it just bogged. I moved to the right lanes as it slowly reduced speed. I had to feather the pedal to try to maintain a reasonable speed. After about 3/4 mile I reached an exit and was barely able to keep it at 60 mph and still losing speed. I had to stop at the light and it idled fine. When it was time to go, I had very little power and it took a long time to get up to 40 mph. I tried to time the lights so I would not have to accelerate again. By the time I got home, (about 2 miles) it was getting worse.

I bought a new fuel filter because it was due anyway and hoped it would solve the problem. I installed the filter a day later and started the engine. It ran fine and I took it for a drive. It ran normally to my first stop (2-3 miles). I then headed back home and it was still running normally. I decided to go on the freeway to give it a good test. I was thinking, could I be that lucky?

At the onramp I floored it in 2nd gear to give it a good test. Initially it accelerated very well but when it got to about 4,000 rpm it started bogging again. I let up a little and it continued to accelerate. I was able to get up to freeway speed but could not floor it. I then exited and drove on side streets for a while. The longer I drove the worse the power got. I was barely able to get home again.

The next morning I took it for a test drive again and it had low power right away. I checked the fuel pressure and it would pump to 65 psi and drop to slightly over 60 with the engine off. With the engine on it would maintain somewhere above 60 psi. I pulled the MAF and filter for cleaning. The MAF didn't look bad but the filter was very dirty. Unfortunately, cleaning both made no difference in engine performance.

I was getting no codes the first couple times I checked but after playing with things a couple days, the "check engine' light came on and I got a P1401 code. This relates to the DPF EGR /sensor. I replaced that a couple years ago and think that code it just a symptom of the real problem.

I checked the vacuum and I get 17 at idle. When I increase rpm a little it drops quickly then comes back up to 17. If I rev it to around 2,000 rpm, the engine gets rough and the vacuum drops way down. The exhaust at idle is much more quite than normal and is not pulsed like it usually is. It has a steady stream of exhaust gasses and seems to be hotter than normal. At idle I can usually hold my hand at the exit of the tail pipe without feeling discomfort. Now, I have to pull my hand away after very short time.

I am leaning toward clogged catalytic converter(s). All 4 of them are original with over 251K miles. I can't imagine all of them are bad. I plan to remove the two rear ones to check out and try driving without them to see if that makes any difference. Will the engine run okay with the rear O2 sensor disconnected or just hanging?
Last edited: Jul 18, 2020

Run it until it starts acting up and check the temp of each cat with a IR thermometer.

With your vacuum gauge reading you were able to get... it sure sounds like plugged cat(s). The IR temp gauge will narrow it down to where.

Yes, your vacuum test points to clogged exhaust, and 17" is low for sea level elevation, 18-21" is expected, you can check vacuum gauge on another engine to confirm

With vacuum gauge attached if you blip the throttle, open it quick and let it snap closed should, see a quick drop to 0-2" then immediate recovery to 17", slow drop and recovery confirms clogged exhaust

My credo
It was like that when I found it.

I plugged a cat in a 75 Granada with a 302 many years ago. ran just like that until the carpet started to melt...

Another vote for clogged cat. Temp test will confirm. Lazer temp probes are dirt cheap these days and a handy tool to have around anyway. Most multi meters can take high temp readings too with an inexpensive adapter.

I was pretty convinced it was a clogged cat. I have a lift and the two rear cats are not that difficult to remove. That is, with the exception of having to grind off two nuts (mine are still intact though). 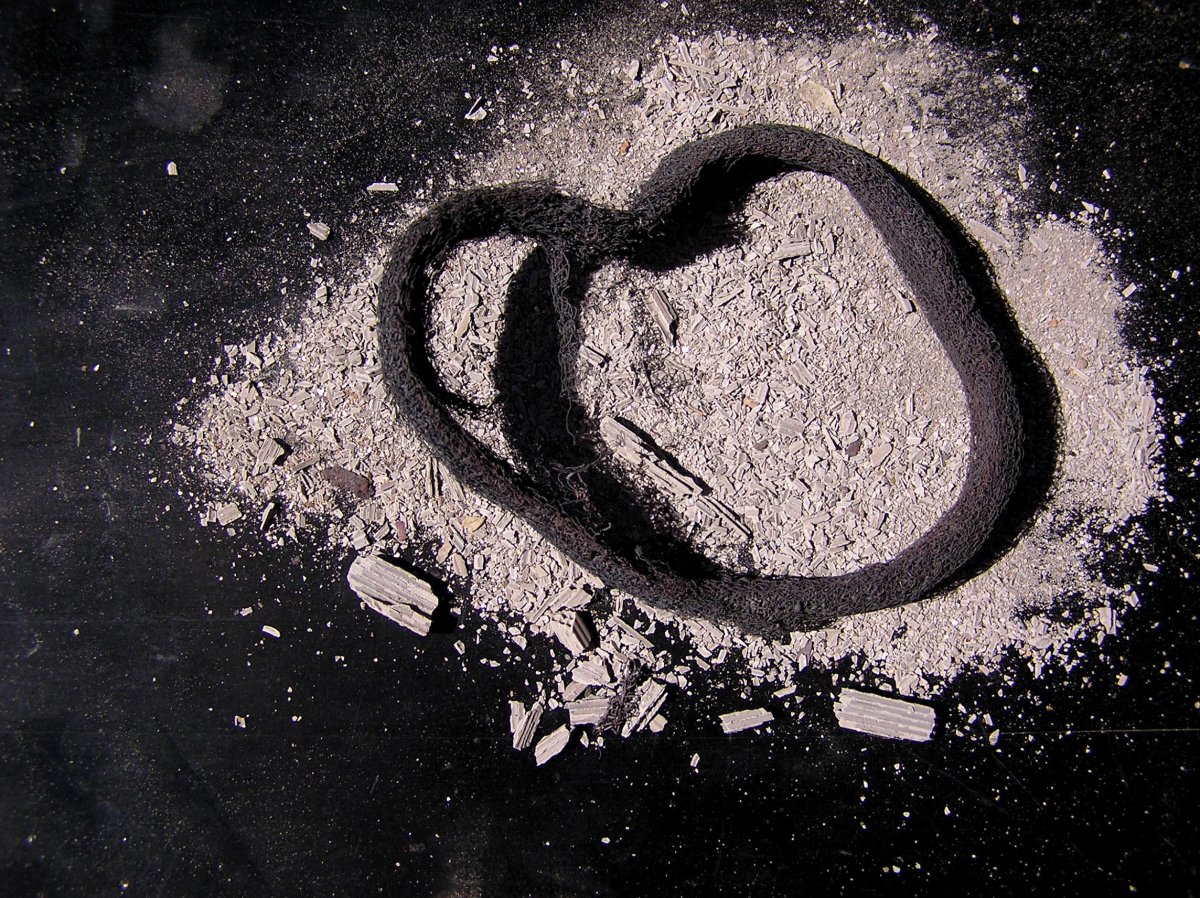 Here is what is still in the front of the two rear cats. 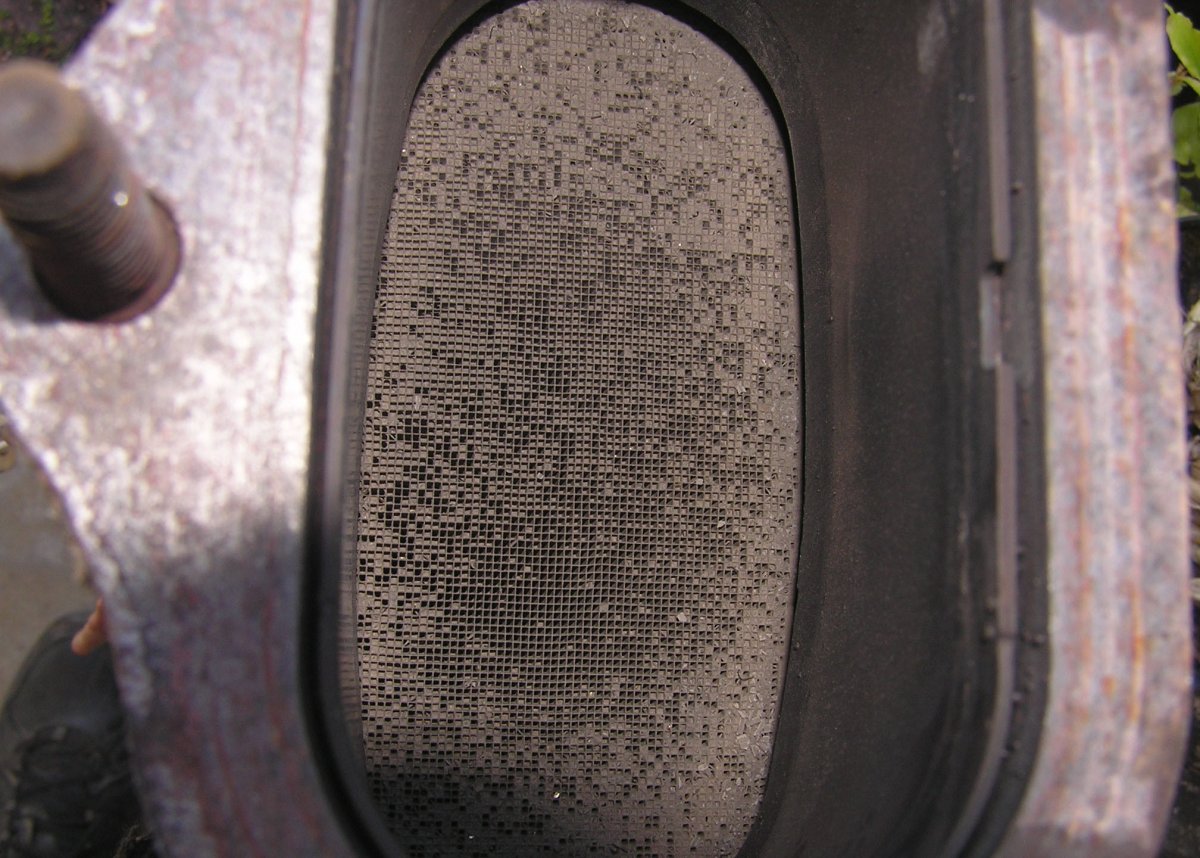 I think the cat is still good but I don't know how to get the stuff that is embedded in it, out of it. I hate to spend another almost $500 to buy new ones just because they got packed with powder. I already banged on it pretty good hoping to dislodge it. Any suggestion as to how get that stuff out of there?

I was going to suggest just buying 2 new universal cats which are pretty cheap, an exhaust shop could probably build a whole new system for under 300 bucks. then I noticed your from California...

Yes, They have to be CARB compliant which are more expensive. I don't mind paying a little more for good parts but I don't like to replace parts that could still be good. I know I have to replace both of the front ones but I would like to figure out how not to replace the rear ones. I guess if the front ones have gone bad the rears are probably near the end of their life too.

I should just suck it up and replace them all. With shipping and tax, it will total pretty close to $1,000. At least I don't have to pay labor on top of it.

The problem is that "dust" in the rear cat is the substrate from the front cats. Chances are that its melted in there and no amount of cleaning will help. You've really got nothing to lose though so I'd just try rinsing it out with paint thinner and then gently blowing it with compressed air. Might work, probably not but worth a shot...

I bit the bullet and ordered Walker cats from Rock Auto. Kind of frustrating because I used the discount code and did not get the discount. I tried correcting that, but nothing works and you can't call anyone there anymore. This is the first time I have ordered parts from them and was not able to use the discount code. If Rock Auto is going to offer the discount, they should honor it.

Just as a follow up, I installed the new cats and my truck is back to running normally again.

I am a little disappointed with the Walker cats though. They fit okay with a little persuasion but they don't appear to be designed to have the flow of the original system from Ford. The collector after the Y-pipe seems smaller and the pipes between the two rear cats are smaller. Even the cats themselves are smaller, and the bends in the pipes are not mandrel bent like the original ones appeared to be. The Walker cats are considerably lighter which I like but, not if it sacrifices performance.

The truck still runs strong but it seems to lack that little extra it had. It may be just in my head. The exhaust was never loud because I have a Gibson exhaust system, but it seems quieter now. Maybe that is the extra, I feel is missing. I have some acceleration performance times that I could repeat for comparision, but that was done with 4.10 gears. It now has 4.56 gears and I think that will make the comparisons questionable. I guess if the times are not as good now, there would be a pretty good reason to believe the cats slowed the truck.
Last edited: Jul 28, 2020

gw33gp said:
Yes, They have to be CARB compliant which are more expensive. I don't mind paying a little more for good parts but I don't like to replace parts that could still be good. I know I have to replace both of the front ones but I would like to figure out how not to replace the rear ones. I guess if the front ones have gone bad the rears are probably near the end of their life too.

I should just suck it up and replace them all. With shipping and tax, it will total pretty close to $1,000. At least I don't have to pay labor on top of it.
Click to expand...

Too bad your in cali. I live in tacoma ,wa and just cut both of mine gutted then and welded them back no problems after that had to put extinctions on the O2 but works

You're suppose to use a banana.