My credo
work Smarter not Harder

So I have to change my Radiator (it's leaking slightly where the plastic meets the metal) and rather than dealing with another plastic/metal radiator I upgraded to an all aluminum one. Trouble is, it's three rows deep and there's no way it will fit with the belt driven fan. I was wondering if anyone has done this and knows any electric fan conversion kits that fit with no to minimal modifications to the radiator support. Help? 1999 XLT 3.0 V6 Flex (if that makes a difference)

I think my new radiator was a two row. I just searched for the thinnest fan I could find. I think it’s 16” diameter and I also tried to get the most cfm’s possible. I don’t have the order info at the moment. I’m not perfectly happy with my home made shroud. It’s working ok.

I’m planning a new engine next year. That project will probably delete my A/C system. At that time, I will put my fan in front of the radiator where my A/C condenser currently lives.

My fan install was with factory rad. I doubt you need that extra row as the Ranger over cools based on my truck and digital coolant gauge - hence the reason for the E-Fan. I struggle in winter to get above 176F

Here's the link to my fan project, not a kit but easy to piece the parts together. Used stock fan shroud to mount fan.

Manual rangers came with 1 row cores, some with AC came with 2 row
Automatics had 2 rows

The fan shrouds are different, deeper shroud on single row

I have never had an issue with plastic leaking, core getting clogged up sure, but not leaking at the edges

If you already have the 3 row then might as well use it.

Fan clutch won't work well if its too close to radiator in any case so maybe you can switch to a regular fan with short spacer, just enough to space out past the screw threads for fan clutch, and 4 longer pulley bolts to hold fan and spacer

Wrecking yard should have that stuff
Flexalite fan might work

My credo
work Smarter not Harder

Nothing and I mean NOTHING in the junk yards. I live out in Arizona and plan on getting my A/C working again, on top of that, I've had cooling issues with it before. I figured a 2 (or 3 row like I got from Amazon) AL radiator would benefit everything and save me some mileage. I did also change the O.E. thermostat out from 192 to 180 to keep from overheating but will go back to 192/195 to keep it from over-cooling. Also, anybody ever had problems with the O.E. rad fan + shroud assemblies from the last years of the 3.0 V6 Rangers? They look like a direct fit with the older models. 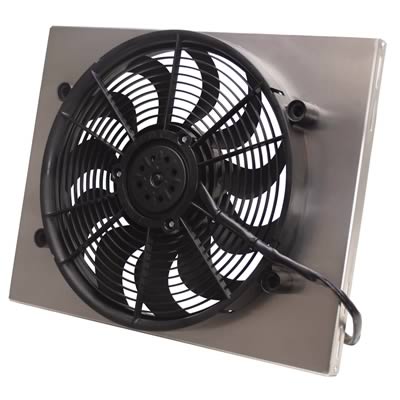 Add another 60 bucks for a controller and you'll be all set. You would probably gain 5-6hp from ditching the mechanical fan, and coupled with the 3 row rad you'd be really extremely hard pressed to over heat the thing.

If you're looking for an electric fan conversion, check this out. https://www.therangerstation.com/tech/volvo-electric-cooling-fan/

If you can find some of these parts in a junkyard, you can do this swap cheap. My brother and I went to a junkyard a few years back and sourced all of the parts to convert our Rangers to electric fans. I think we paid like $50 each for our fan assemblies along with all the other little parts we took. He went with the swap described in that article - the Volvo fan, Volvo relay and BMW temp switch in the upper rad hose. I went with a fan from a 3.8 Thunderbird, the Volvo relay, and the Volkswagen temp switch. Both of our setups work great. We both bought new Volvo relays just to ensure reliability, but found a few Volvo's with similar relays to take the connectors from. You also have a few choices of temperature switches to use with different temperature ranges.

You said you were looking for a swap with minimal modifications, this swap didn't require much at all. I had to modify the 3.8 electric fan assembly a little to fit my truck. The only modification I had to actually do to the truck was cut the upper radiator hose so I could put the temperature switch in line with it.

Like others have said you will free up some horsepower, but I doubt you'll feel it. What you will notice is the slight MPG increase and a much quieter fan. My brother has a 2.3 4WD 5 speed, and before he would peak at like 27 MPG. After the e-fan swap he almost hit 30 MPG, 29.8 or something like that. I gained 1-2 MPG as well in my 3.0 4WD 5 speed Ranger after the swap. In my case, I also gained more room between the engine and fan shroud with this swap which makes some maintenance jobs easier, so there's more than a few benefits to the swap and I would highly recommend it.

Other than that, I would suggest you do a coolant flush before you swap your radiator. In my opinion, you shouldn't need to use a 180 degree thermostat to stop from overheating. I recently flushed my coolant and put in a new OE temp thermostat and the cooling system now does a great job at maintaining the temperature. Before the flush, the temperature gauge would be right at the halfway point when I was driving, and the low speed fan would kick on relatively often. After the flush, it now rides a little below half and the low speed fan rarely needs to kick on. To me, that shows that the cooling system (when clean) is plenty sufficient. And by the way, I'm currently living in TX and haven't had overheating problems yet, even before doing the coolant flush.
You must log in or register to reply here.
Share:
Facebook Twitter Reddit Pinterest Tumblr WhatsApp Email Link