I did get the book for it off ebay too. 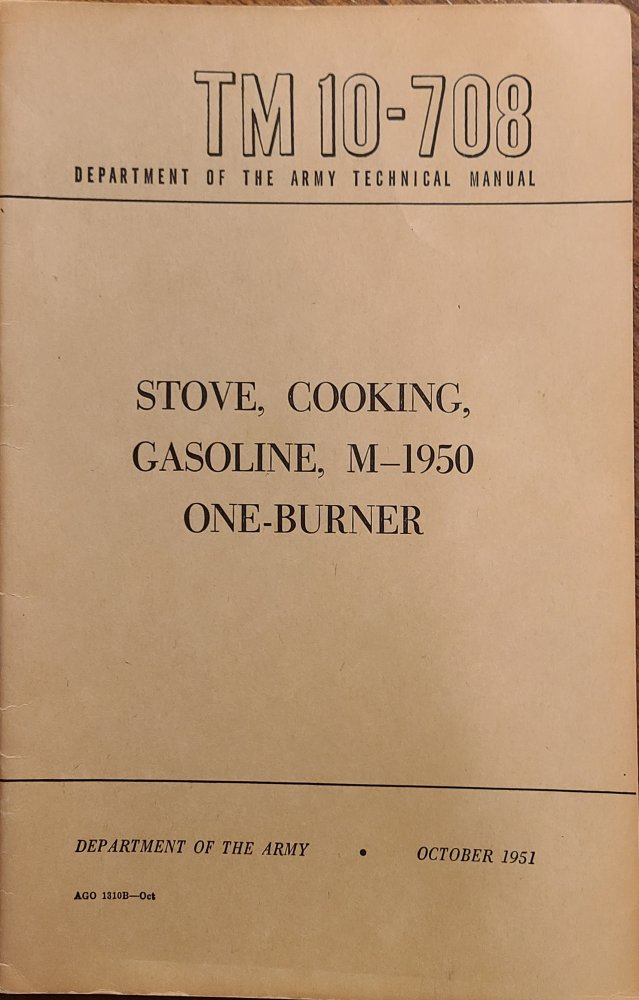 A guy knows it is getting bad when he is ordered to destroy his stove so it doesn't fall into enemy hands... 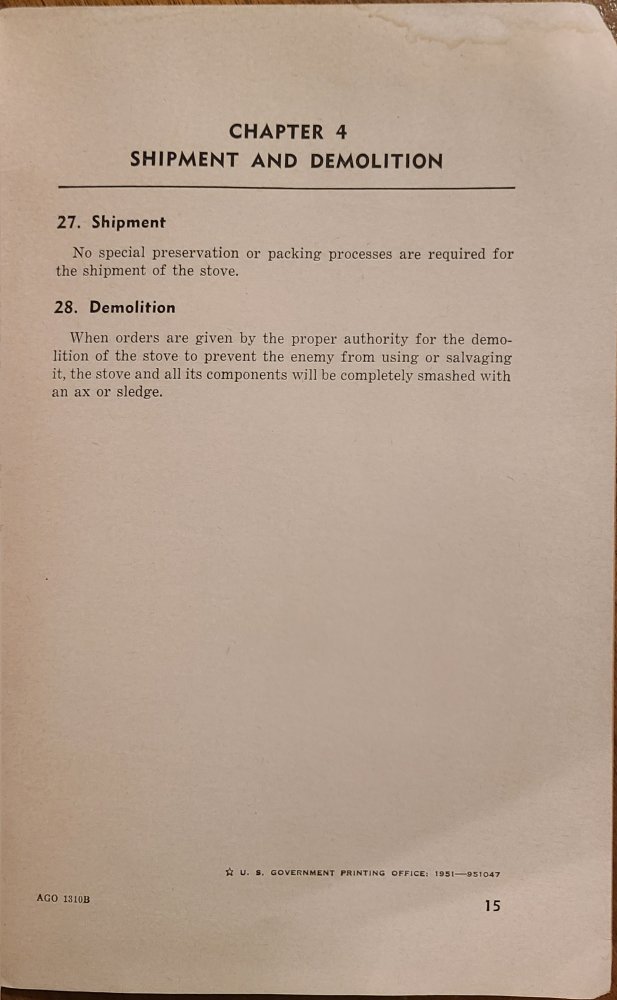 Does that mean you are going to smash the stove to prevent the enemy from using it?

sgtsandman said:
Does that mean you are going to smash the stove to prevent the enemy from using it?
Click to expand...

Cold beans for them!

Use the little supplied bottle to put denatured alcohol in the preheater cup... 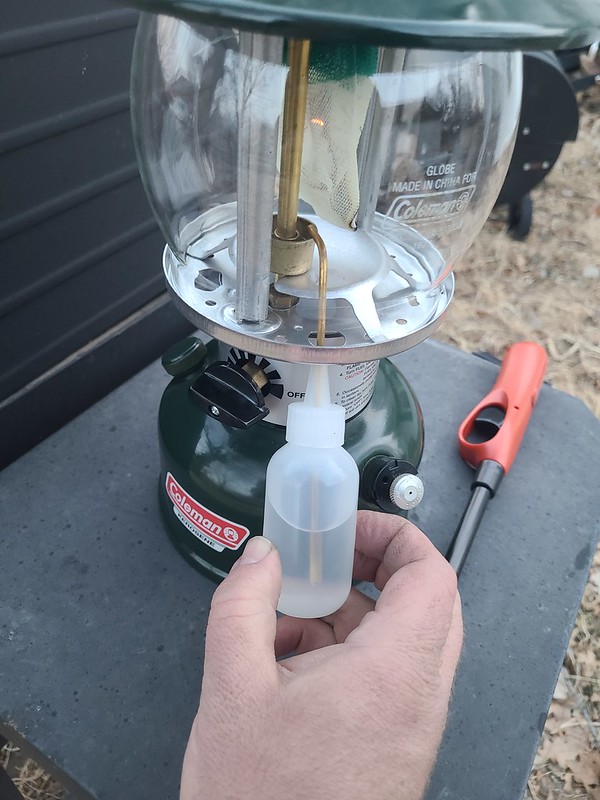 Light the alcohol on fire... 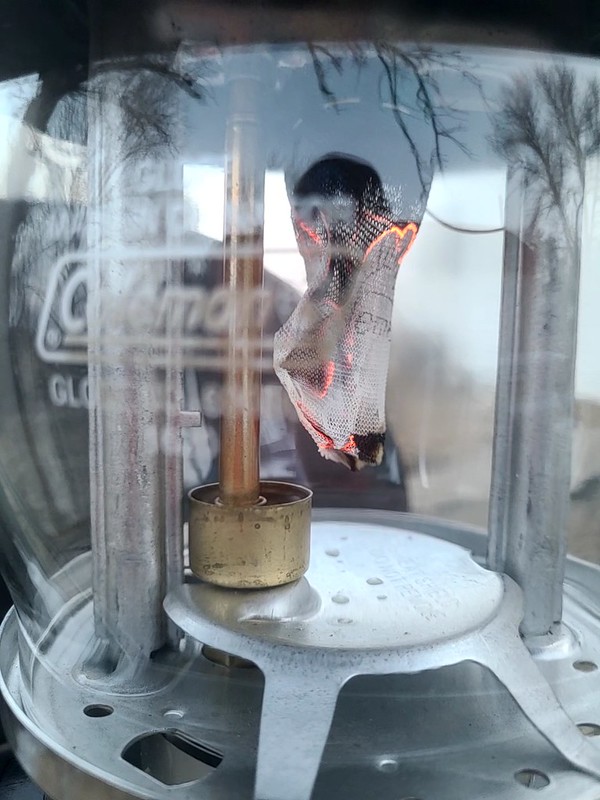 Right before it is out of alcohol throw the fuel to it... 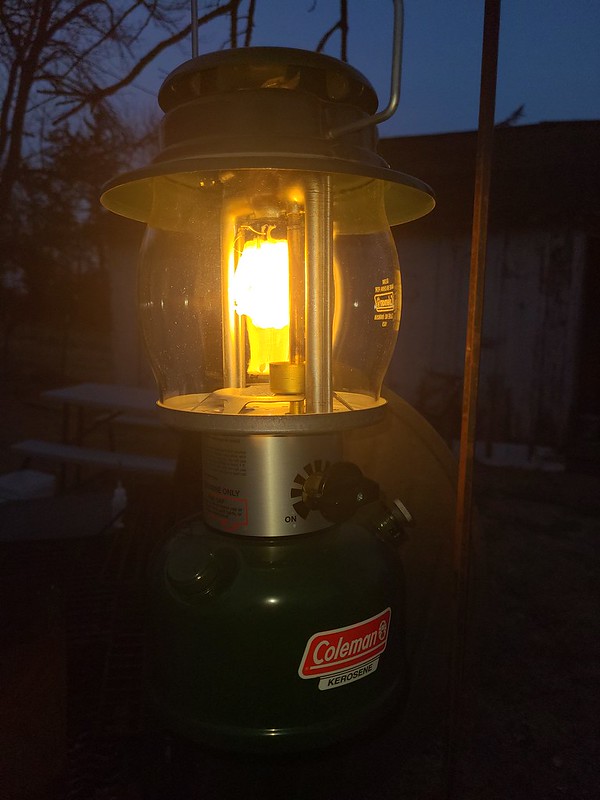 And now you are grilling in kerosene fueled sunshine of the night! 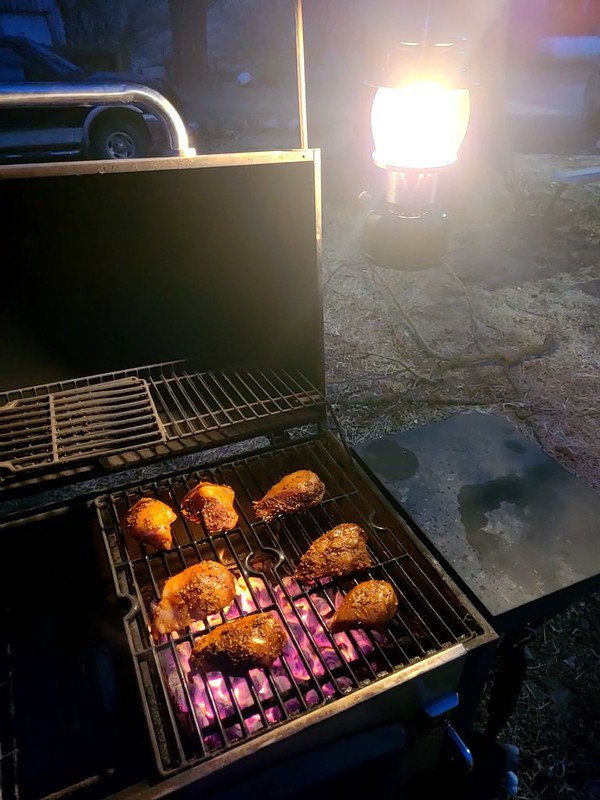 Fuel smells like kerosene (or diesel) obviously. Lantern had no smell as it was running

Lighting process is rinky dink enough to be interesting but surprisingly effective. Let the little cup burn for what seems like 3 days and as soon as the fuel comes on the lantern is on. When you are done as soon as you close the valve the lantern goes out. No flareup drama at startup and it shuts off like it is electric.

Huge single mantles... not sure they are as durable as the ol #21's. I had it going for maybe 45min while I was getting the grille ready and grilling. We had company over so it probably got left out in the wind an hour or two after I shut it off. Kinda not really impressed with the big weird mantle already having two big holes in it. 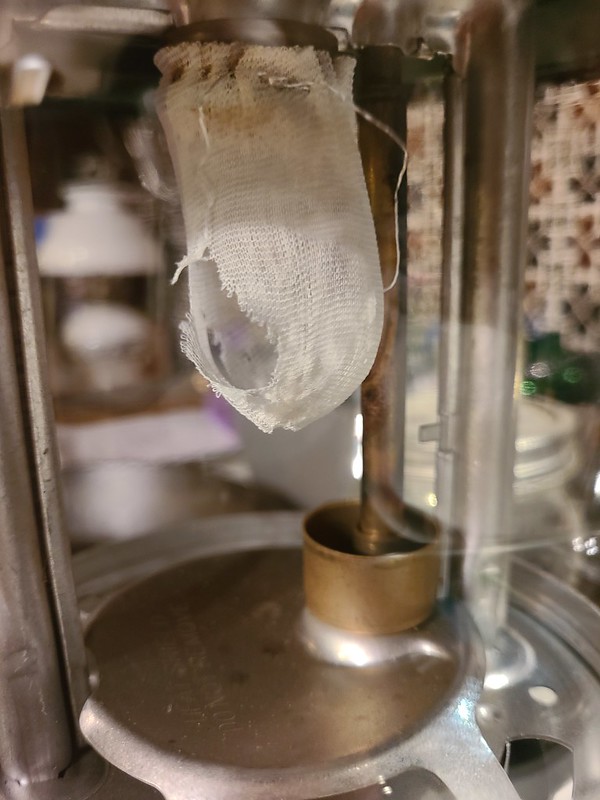 I am guessing it happened while the lantern was shut off in the wind, seemed normal while it was running.

Really puts out the light though, granted the #11 mantle is probably close to twice as big as a #21 but I don't think a 220 is any brighter.

Really don't like the headphone handle that just pokes in the burner frame. I was holding it by the handle trying to wipe spilled kero off of it and the handle came out of one side of the top and the whole thing about dumped on the ground.

But yeah, going to try it when it is not gusting 30mph out and I think it will go really good. I also need to get Peerless mantles for it.

I’m not a fan of the lighting process of the kerosene lanterns. A necessary evil and it’s nice to have more than one option for lighting as far as fuel sources goes.

sgtsandman said:
I’m not a fan of the lighting process of the kerosene lanterns. A necessary evil and it’s nice to have more than one option for lighting as far as fuel sources goes.
Click to expand...

If you are not in a hurry I thought it was actually kinda fun.

I think I have about all of them now for full diversity. White gas, dual fuel, kero and propane.

Score... My small lantern collection is somewhat complete now! Found it at a pawn shop for $20. Like new! Full of gasoline though, will have to run it dry and clean that crap out. 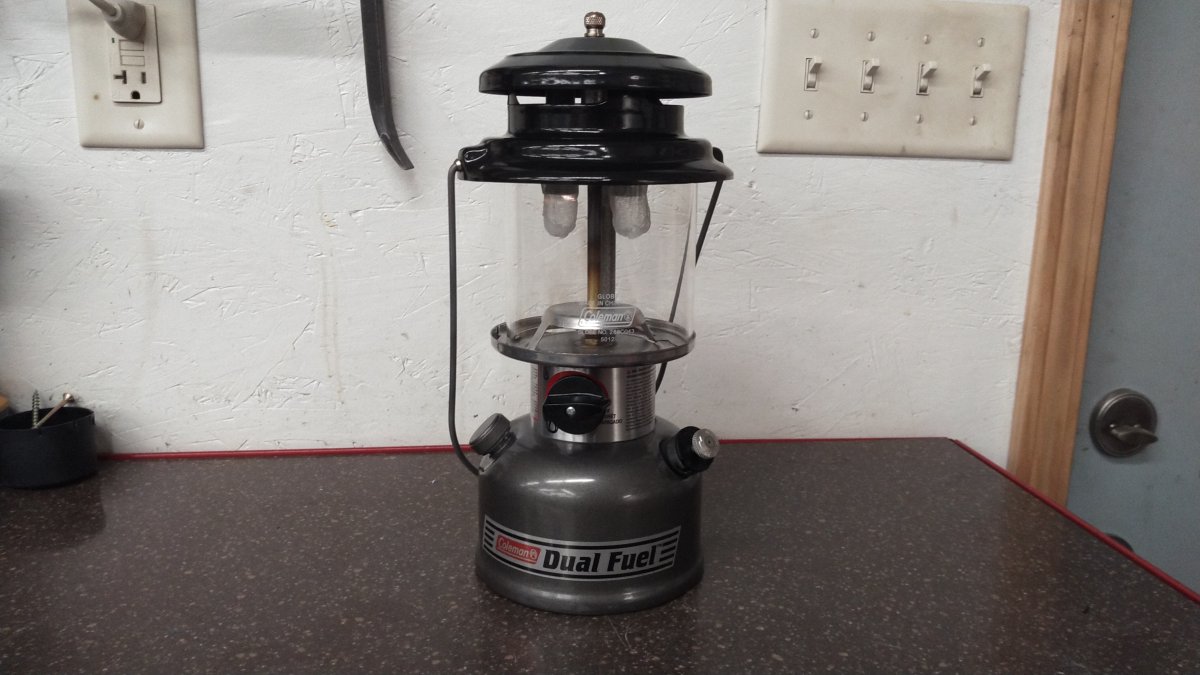 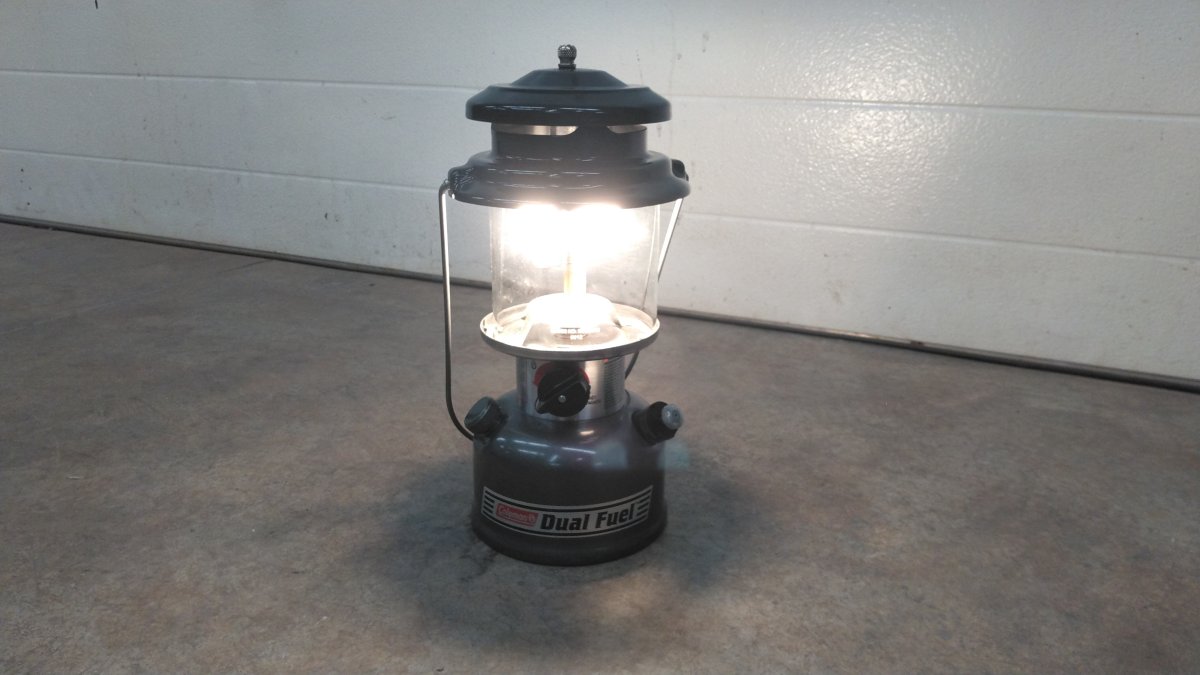 Two years ago on my way home from the Trail Ride... I stopped at an antique shop to look around. I found a dual fuel really similar to that one. I don't remember exactly what he wanted but at the time I thought it was to much ($25 maybe). I still kick my butt for not just owning it.

The later ones are under rated imo.

There are certainly more plastic parts but they are great lanterns if you don't let the fuel go bad. I make a point to drain out all my newer Coleman gear... Seen several dual fuel stoves and lanterns ruined by gasoline that went bad.

Won this in an a local estate auction along with a broken Thermos lantern. The stove is a Canadian made model 4M that was made in 1962. I do not believe there is any US model similar to it... the grate, lid, wind flaps, second burner knob, etc are all pretty unique. I believe the round fuel tank was used later in Canada as well? Supposedly the previous owner lived in Alaska for quite a while and the lantern has a partial shipping label left that says Fairbanks AK on it. The stove is just super cool, and has a lot of honest wear from use... I will keep that tradition alive, it works great! 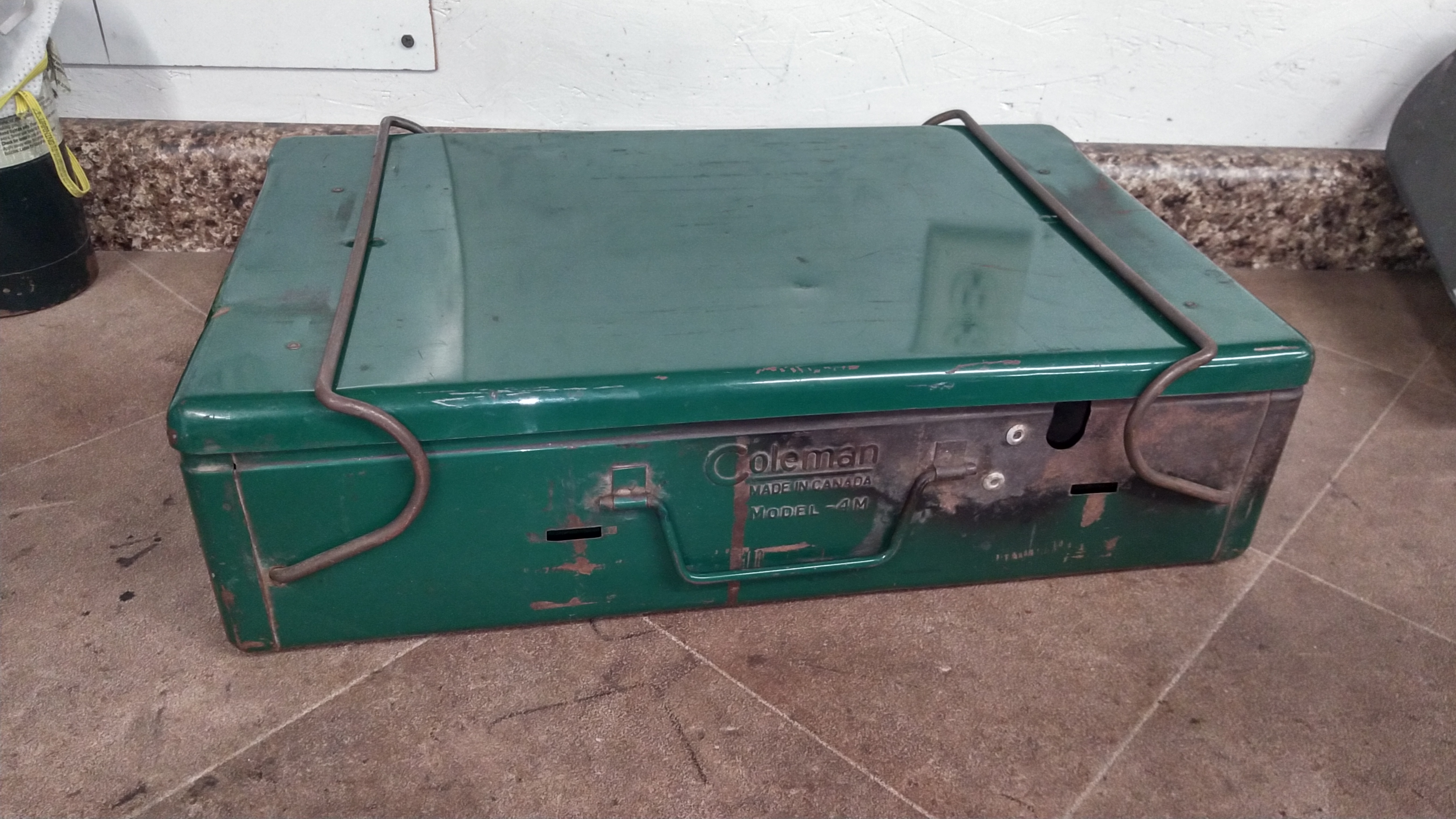 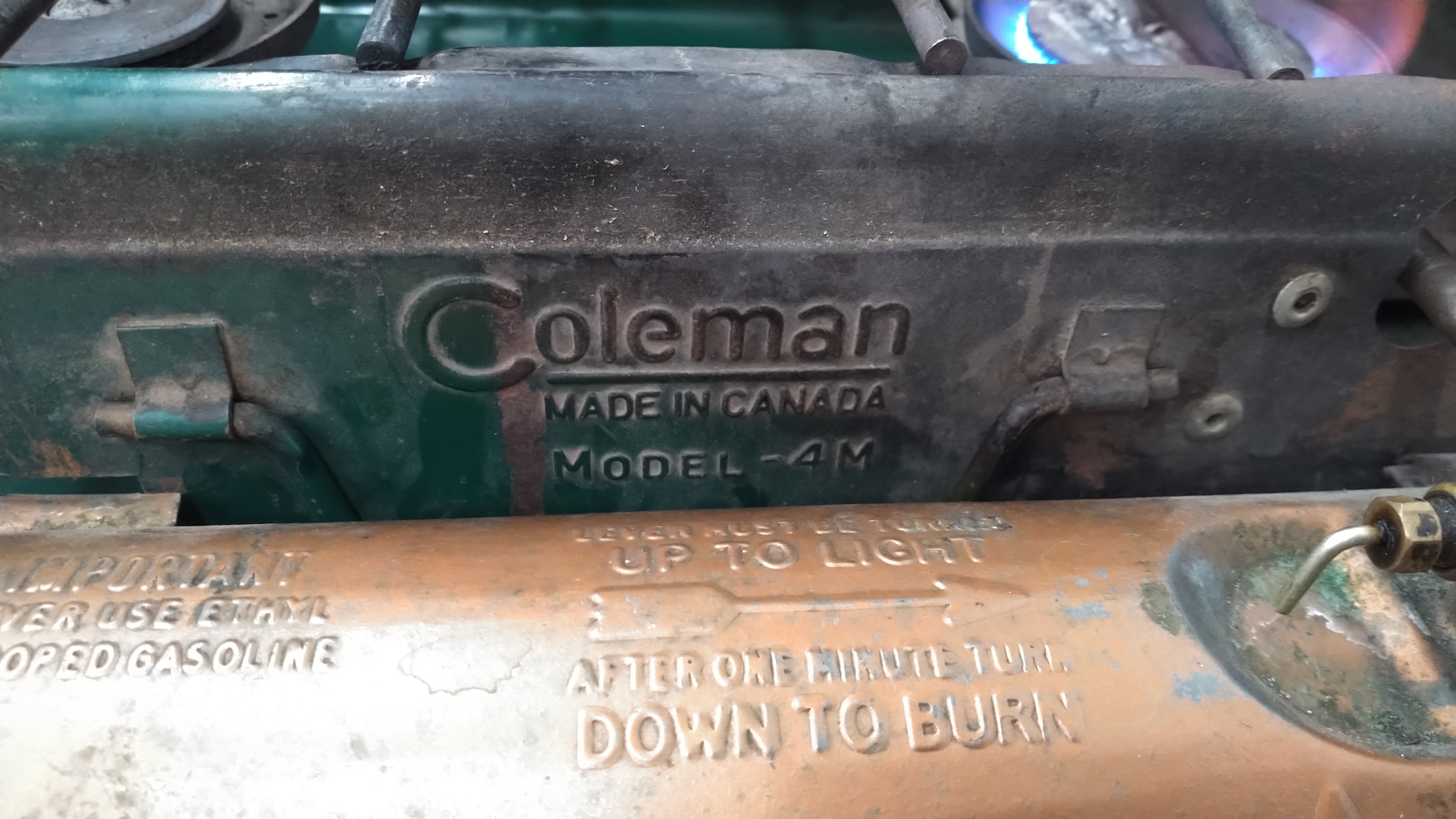 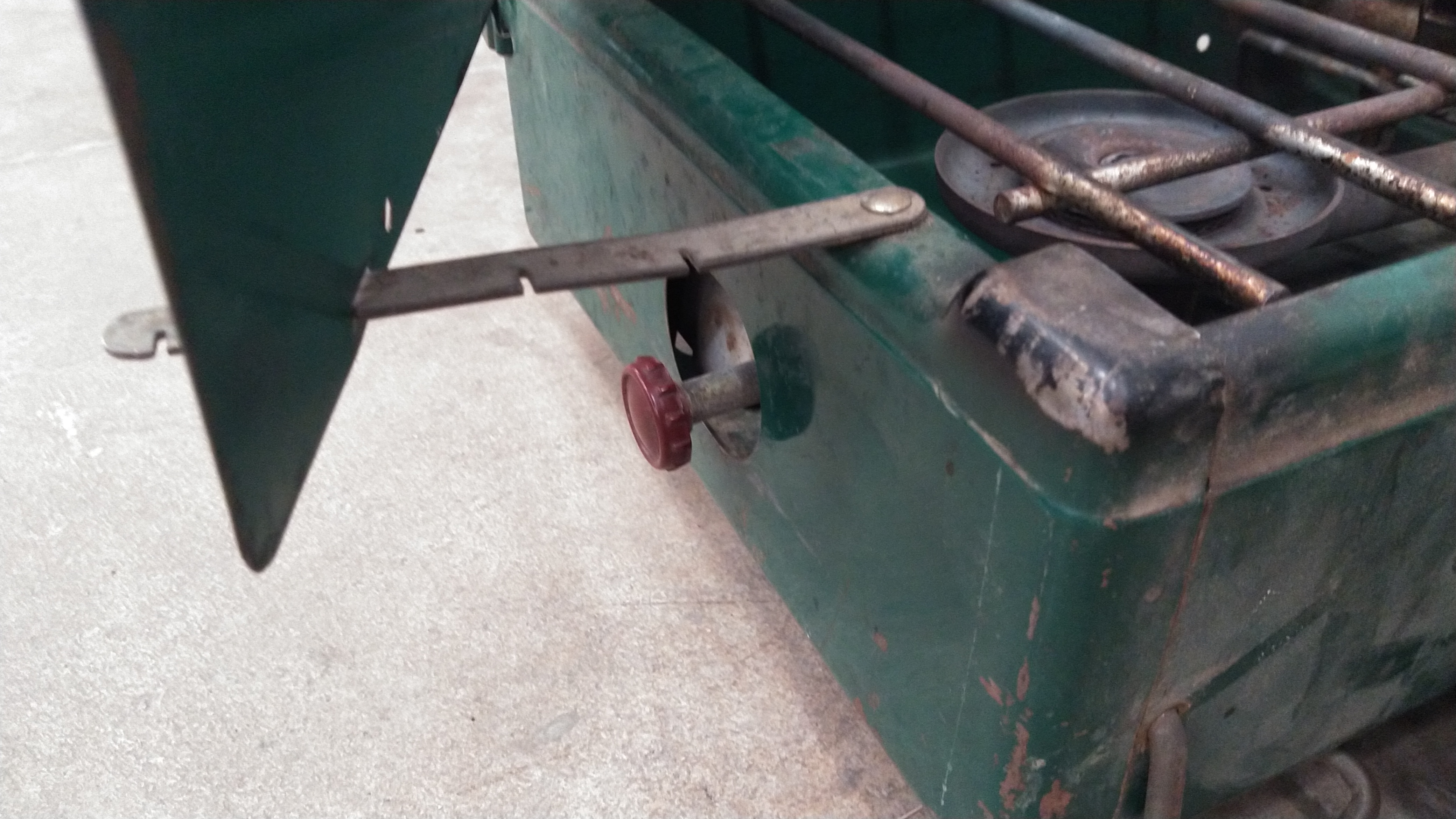 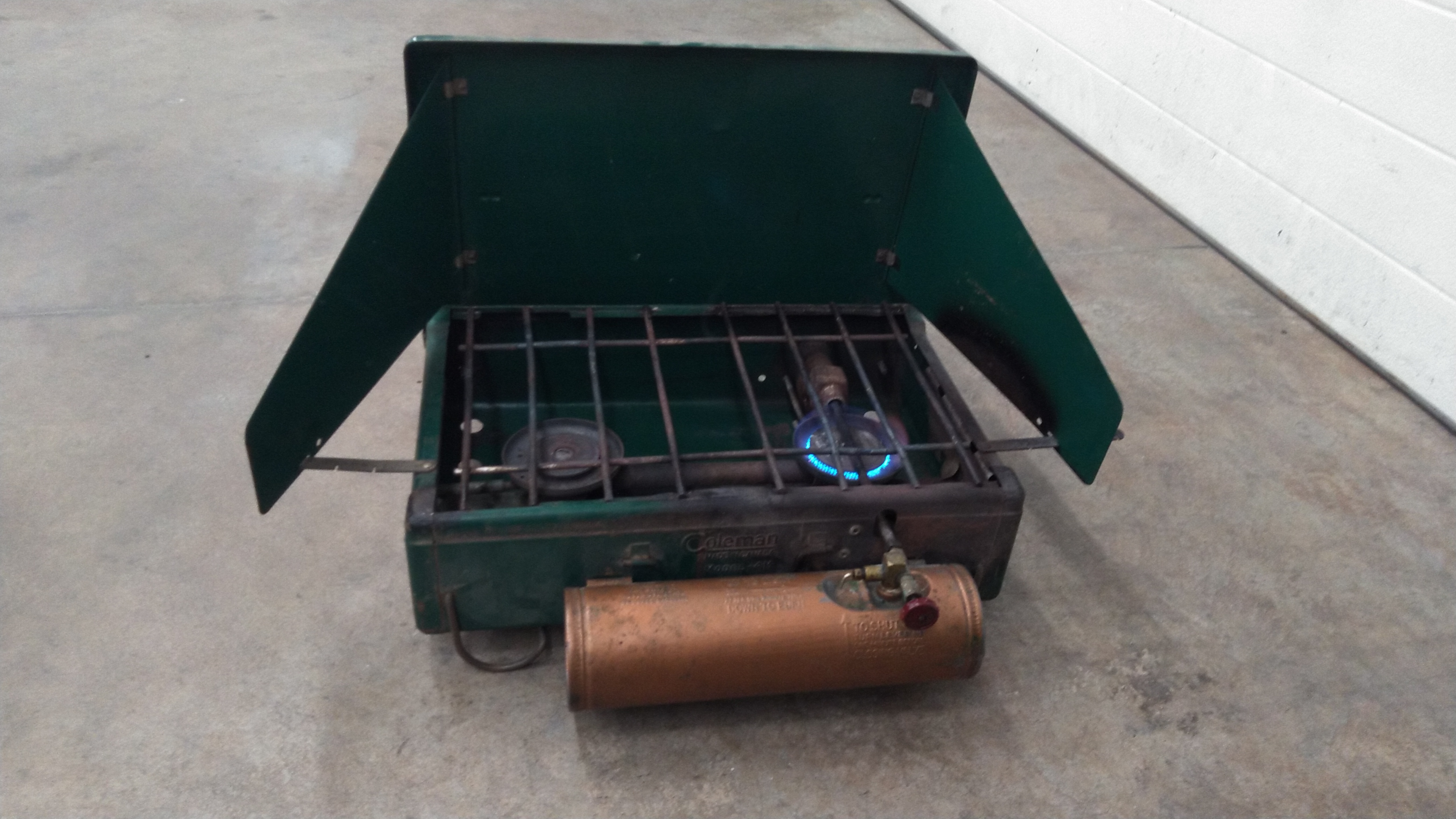 AND AS AN ADDED BONUS... I have had this funnel for quite a while but now it has a stove to call home! 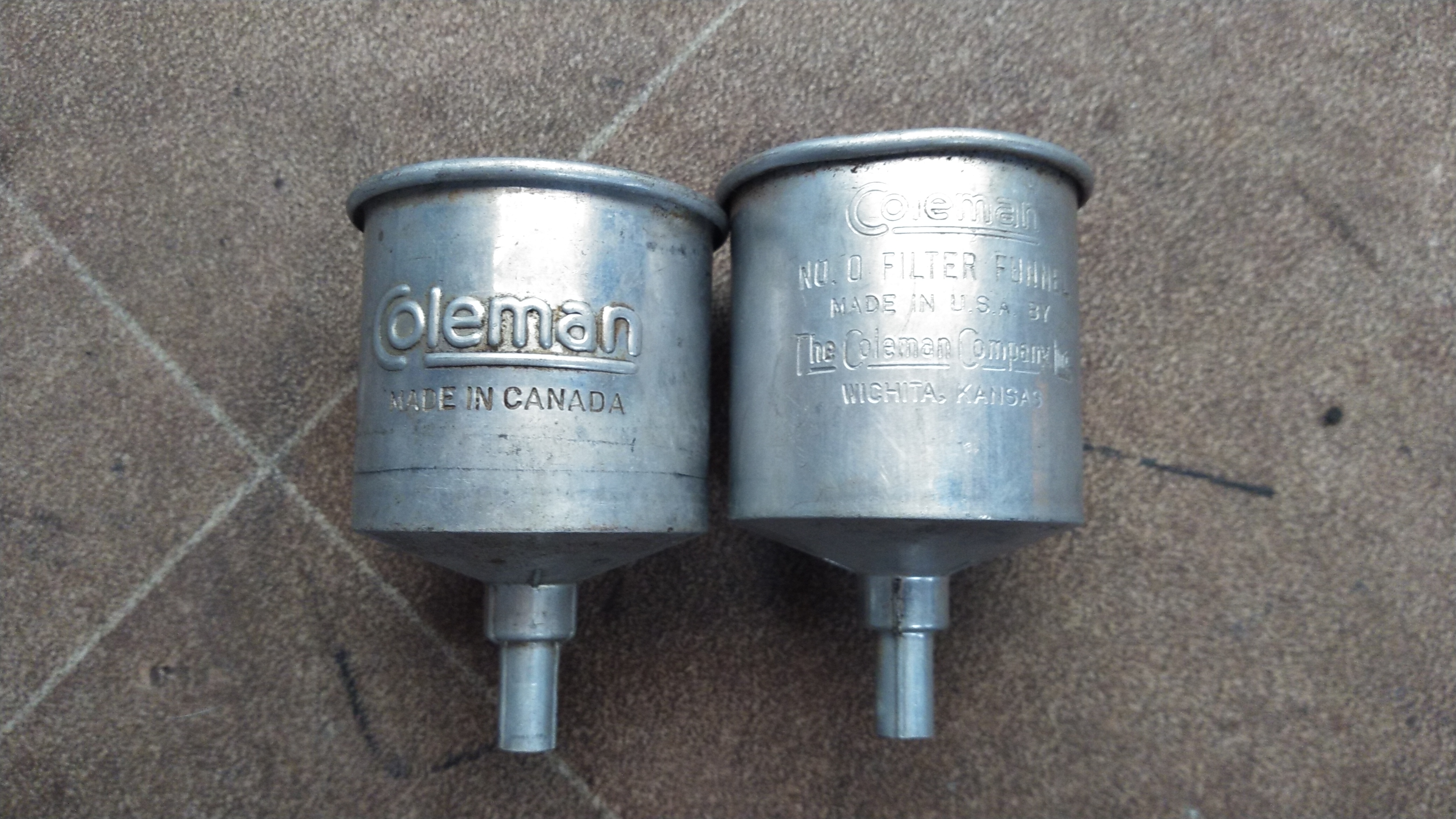 Canada had a bunch of weird/interesting things.

OCP has a bunch of NOS Canadian 325A founts for sale pretty cheap. I have thought about snagging one to make a mutt of something. 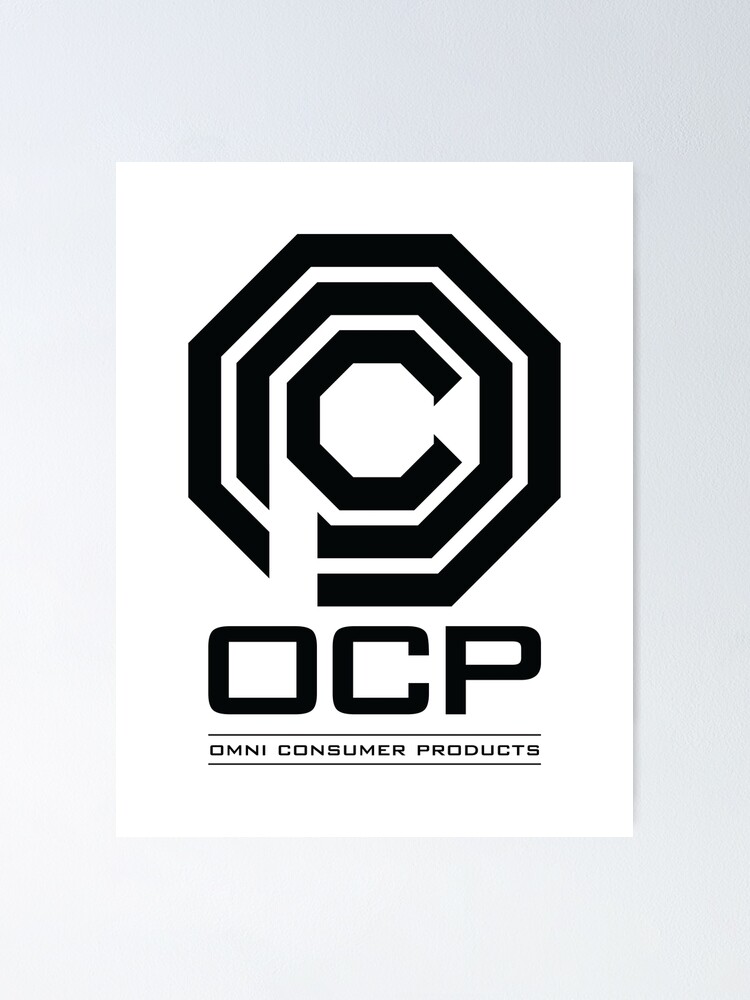