I'm not really sold on car ramps. But my experience with them is really from probably 30 plus years ago. My wife's escape is just a hassle for me to get under and I find myself considering buying a set of ramps to maybe ease the pain. I was looking at these and wondered if anybody here has any input on these or ramps in general. Thanks in advance...

Ramps have always worked for me. Even those cheapo stamped steel ones.. I've always made sure they're on a nice solid surface though.

They all work. The metal ones you can use in gravel driveways, kind of, they tend to sink after awhile. The plastic ones have to be used on a paved driveway or you have to put plywood down over gravel to use them on gravel (which doesn’t sink). Block the back tires and you’re good and be careful not to drive all the way over them pulling up.

Ive got a pair of steel ones i bought years and years ago. Other then certain vehicles causing them to skid on concrete (the ranger is the worst offender) ive never had any issue. I used to park my heavy ass 94 E150 hightop conversion on them and they were rock solid.

A friend just bought a set of the plastic ones from Harbor Freight, so he could change the oil in his Subaru WRX by himself for the first time. He was happy with them. Myself, to prevent sliding, I put them up against a curb before driving the vehicle up. And some even have block off plates on the front to prevent going too far. Harbor Freight has a set with hose plates.

Yeah... it just keeps getting harder for me crawling around on my hands a knees placing the jack and jack stands. This escape would be easier with a low profile long reach jack... but I've yet to upgrade the floor jack. These ramps would solve all that... and the escape developed an oil leak and I need to get under it and check it out.

I guess if I don't like them... my son in law expressed interest in a set and I can just gift them at Christmas.

I have two sets. One for the trucks and one for the girlfriend’s clown car. It sits so low I have to use ramp extensions so the front bumper air dam doesn’t get damaged. They are both metal sets and have worked well for me.

A medium height ramp set might work well for the Escape, depending on the air dam clearance. Mine hit the upper and lower extremes in the height department.

I have a set of those same composite ramps.

They work well, unlike the metal ramps they tend to remain stationary when one begins to drive a vehicle up onto them. The steel set I also have are useless on a concrete surface as they will not stay in place when a load is driven up onto them, they will slide out from under the vehicle.

I also own a 2018 Escape, oil changes are a pain-in-the-ass due to the belly shield having to be completely removed before one can drop the oil.

A couple of things I found that helps with the shifting ramps on gravel is to kick the ramp so it jambs under the tire and using the ramps on the wheels getting power.

So FWD, not problem for oil changes and what not. 4 High engaged on 4X4 vehicles.

I have a set made from 2x6 and plywood, curb rescue lol. I was never a fan, but they do come in handy nowadays. I use them pretty much any time I gotta go under without removing wheels.

I have that same set I bought 6 or so years ago. I normally only use them for oil changes because I don't rotate tires when I change oil. Much quicker then jack stands. I've used them on my mustang because it's too low to crawl under, and I use it for my wife's Subaru now. No complaints. They work as intended, they nestle well when stacked so I can stack them and then store them standing up. Use them exclusively on gravel/ dirt, never had an issue with them sinking, even when it's a bit soft.

It's a lot easier then dragging a jack, jack stands, and sheet of plywood around to jack up a car on the gravel.

It depends on what I’m doing. I do oil changes every April and October. So, tire rotations or swaps are very much in the picture along with brake inspections and lubes.

The 2011 sits high enough that I don’t always need ramps either. For the gear oil change, I dropped the spare and just worked under the truck as it sat. I think the 2019 is the same but I haven’t done as much work on it yet.

Yeah, with my trucks I've always just slid under and done the work.

I do an oil change every two or three months so I want to get it done and move on. Me and the wife both drive a lot, so it ends up being about one a month.

If I was going to buy some, I would get those plastic ones. I don't trust the stamped metal ones. I have 2 pairs of wooden ramps. One is a pair my dad made when I was a little kid, or earlier. Thatsmy favorite. Each one has 3 2x6's or 2x8's on edge with the ramp profile cut out. Then pieces of 2x6 nailed crosswise on top and bottom to tie it all together. Heck. Give me a minute I'll go out and take a picture.

Ramp. I use these for the Fun50. The Ranger sits high enough it doesn't need them. In fact, I was crawling around under it with the pressure washer this morning. 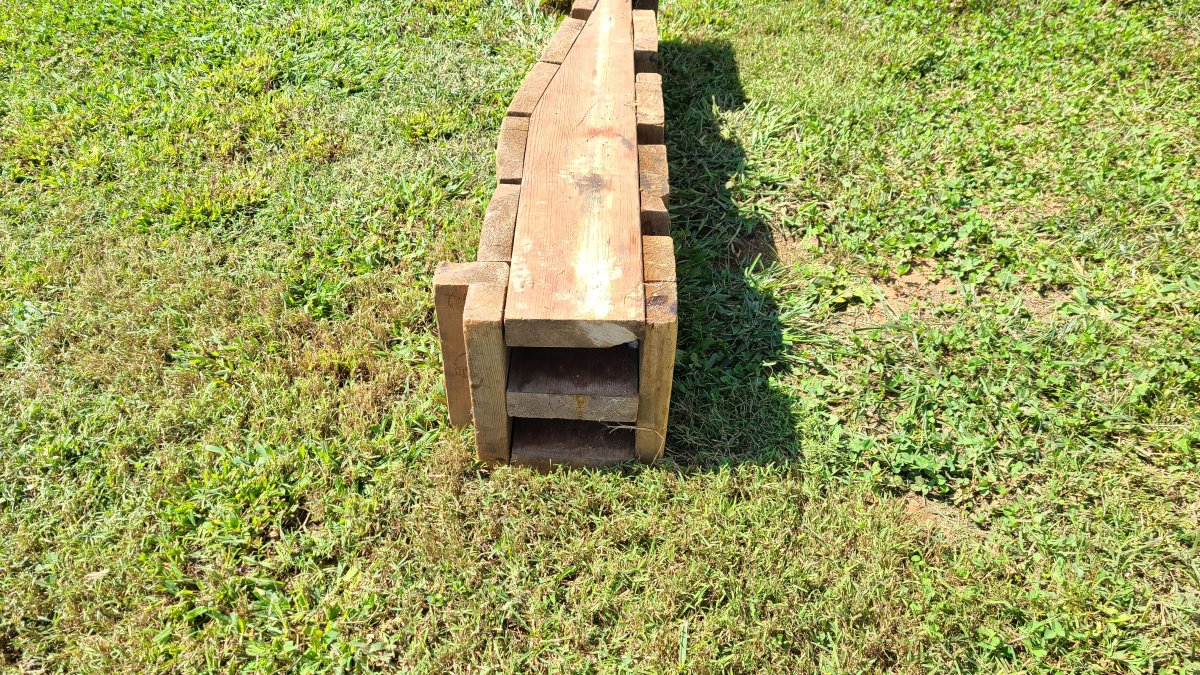 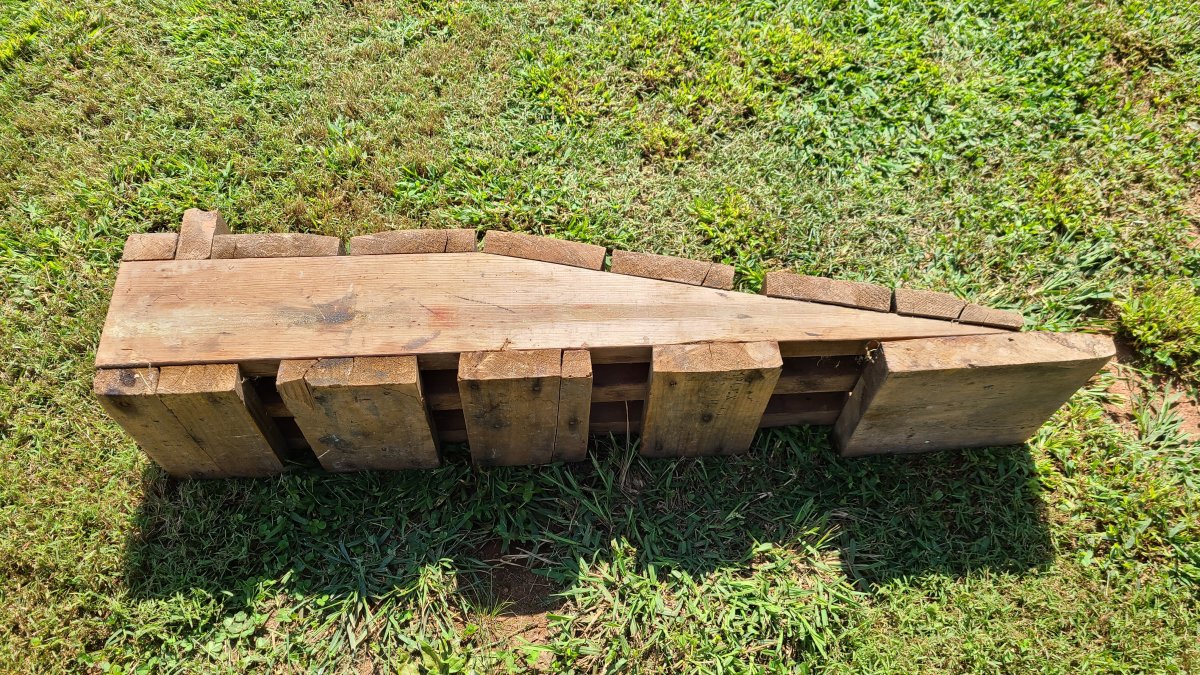 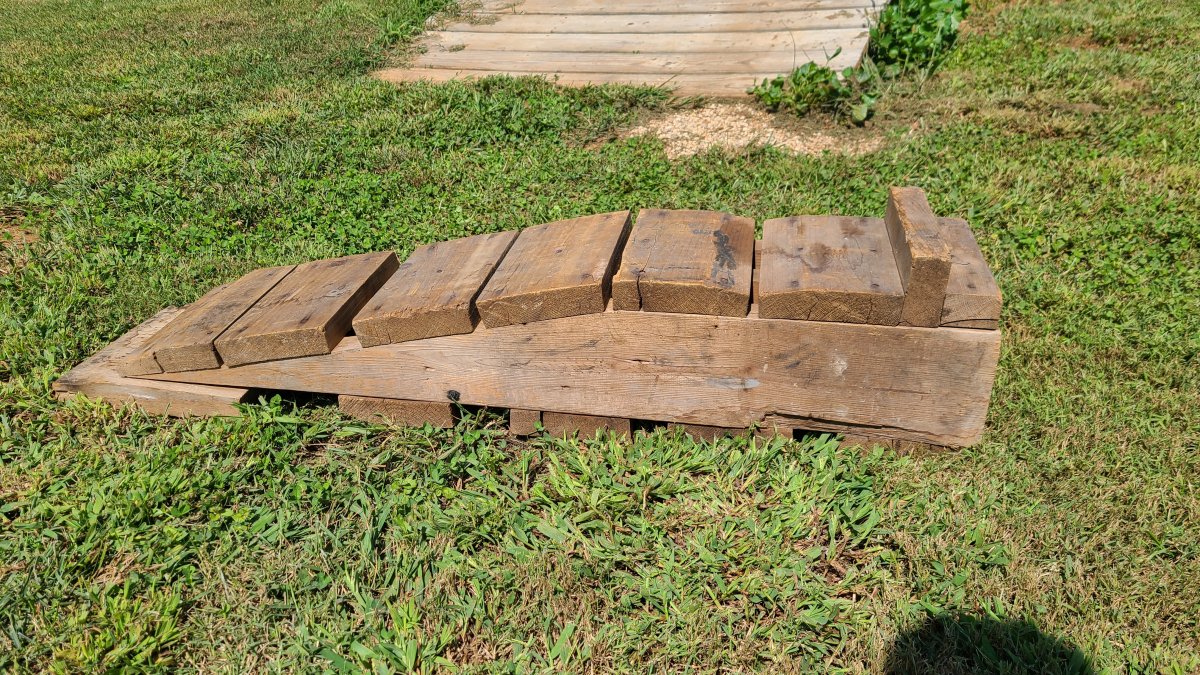