where is this sensor located? My truck misfires and carbon fouls plugs, have replaced O2, MAP, MAF, TPS, Cylinder head temp sensor, engine blows grey smoke too rich. CEL always says lean code. Anyone got a picture of this thing in the truck?

Very back passengers side of the valve cover. 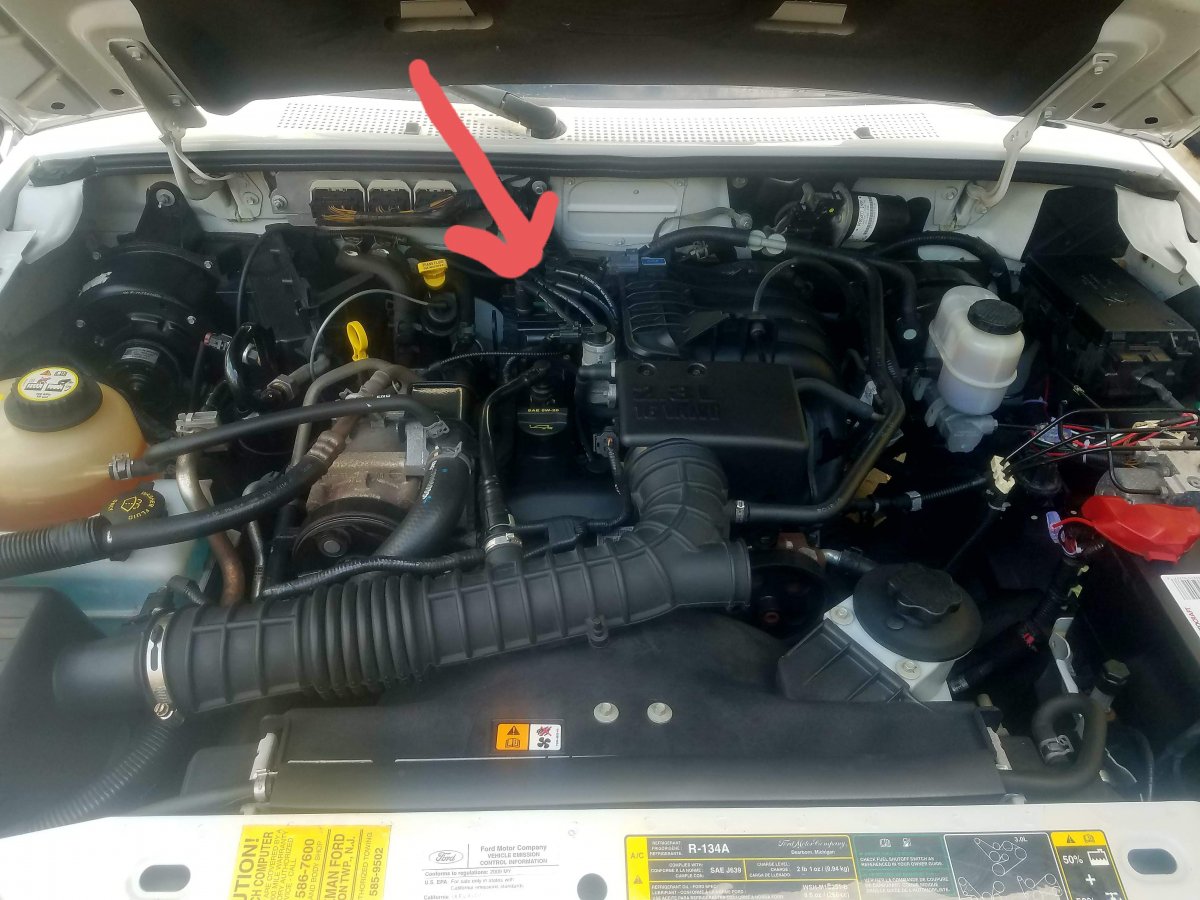 But it does not sound like a cam position sensor problem. Sounds more like a large vacuum leak.

"Lean" code is often confused by people thinking its Fuel related, it is "sort of" but not really

Computer calculates air/fuel mix based on engine RPMs, it "knows" its running a 2.3 liter engine so its a pretty simple calculation to get how many Liters of air are coming in at say 2,500rpms, just math
14.7:1 Air/fuel mix the WEIGHT based
14.7 pounds of air to 1 pound of gasoline
14.7 grams of air to 1 gram of gasoline
Again just math

The big variables are Air TEMP and Air WEIGHT
Cold air is heavier than warm air, "hot air rises", because its LIGHTER that cooler air, so there is an IAT or ACT air temp sensor
Air is lighter(less dense) at 5,000ft elevation than it is a Sea Level, this is what the MAF sensor is for, it measures air density, the WEIGHT of the incoming air

Computer calculates the air/fuel ratio by RPM then off-sets that calculation based on air temp and air weight
This is called 0 STFT(short term fuel trim), and this is the OPEN TIME calculated for each fuel injector
Computer "knows" the size of the injectors, and since there is no fuel pressure sensor, computer assume 55psi(1998 and up Rangers)
Computer opens each injector and THEN..........it watches O2 sensor for feed back on STFT 0

If all the air is not passing thru the MAF sensor then computer calculations would be off, that's why Vacuum leaks can cause "lean" codes
MAF only samples 10% of the incoming air so small difference at MAF is a TIMES 10 difference at computer


Your issue reads like a "false lean"
Computer is seeing too much oxygen in exhaust and is adding more fuel, STFT +15%, but its "false" so engine is actually running Richer than it should

Misfires cause false leans because when a cylinder doesn't fire no oxygen is used up and its all dumped into exhaust manifold so O2 sees high oxygen, false lean.............computer adds more fuel

Old O2 sensors, these last 150k miles or 12 years, then chemicals are used up, they show leaner and leaner oxygen levels as they age, so MPG gets lower and lower, worth while changing these at 100k miles


Your Misfires are the likely issue for the false lean
I would do a compression test on each cylinder just to take that off the table, because if it is a compression issue you will just be wasting time(and money) looking for spark/fuel issues

Leaking injector, yes you would think that would cause "rich" code, but no, it causes Misfires so false lean
The smoke can be the unburned fuel being burned up by the Cat(s)

There are no vacuum leaks, no exhaust leaks, good compression. Sometimes it will idle fine, most of the time it idles very rough and only runs on 3 cylinders, and has no power unless you go wide open throttle, then the miss firing cylinders clear out and then it starts again as soon as you let up on the throttle.

Are there any codes other than lean? Are there any cracks on you air intake system? Lean conditions are from the metered air side, i.e. vacuum leaks

It could be a bad injector. Get hold of a FSM (factory service manual) and start testing and diagnosing items rather than throwing parts at it.

P0128 thermostat. This misfire problem started all of a sudden for no reason. Truck was running fine then started misfiring. I suspect the valve guide seals are shot, or the fuel injectors on cyls 3 and 4. 4 seems to be the biggest culprit.

Fix that and it will probably fix the misfire. There are 2 temp sensors for the ECM, you've replace one already. It could be the t-stat too.

You've replaced so much stuff its now impossible to know if you've just not got lucky enough yet, or you could have one or more bad new parts. Most of the stuff you replaced are not wear items and should only be replaced when tested and verified faulty. You need to stop throwing parts at it and do diagnostics.

You say compression is good but what are the numbers and did you do a wet/dry test?

Run a series of vacuum tests. You can check for exhaust problems, valve problems, and some other things with a 10 dollar vacuum guage.

The spray test for vacuum leaks is not foolproof, especially on a duratec since their are spots on the bottom of the engine where vacuum leaks can happen. Like the oil separator. The EGR valve is also almost impossible to test with starting fluid because of its placement and by design they leak internally. A smoke test is much better but you can also run a vacuum guage and compare with the baro/map sensor readings to get an idea if it's pulling the correct amount of vacuum at idle.

Fuel trim data is also a good way to check for a vacuum leak. High trims at idle that drop quickly when the engine is put under load is usually a good indication of a vacuum leak.

THERE IS ONLY 1 VACUUM LINE ON THE BOTTOM OF THE ENGINE, IT IS FOR THE PCV VALVE WHICH IS NEW. I STARTED THE ENGINE WITH IT OUT OF THE OIL SEPARATOR AND IT HAS VACCUM AT IDLE. Here is something strange. The engine runs on all cylinders when it is floored, but runs on 2 or 3 cylinders at part throttle cruise and then it shakes horribly. Does not have VVT or IMRC engine.