My alternator and battery both died last month, both really old, and I replaced them both with new units from Napa. Not sure if a fluctuating amp gauge needle is always something that has happened, but I’m seeing this needle go up and down a bit when lights, radio, etc, are on with the blinkers.

Is this normal? Here’s a video with AC, high beams, radio and hazard lights on:

The voltage from the battery terminals read back and forth from about 14.10 to 14.8. I’m just afraid I’m going to burn the new alternator out on the road if there’s another issue.

Terminals are super clear, battery cables seem fine, I only noticed a little little minor corrosion near the connection to the fuse box (first pic below, I cleaned up the connection a little): 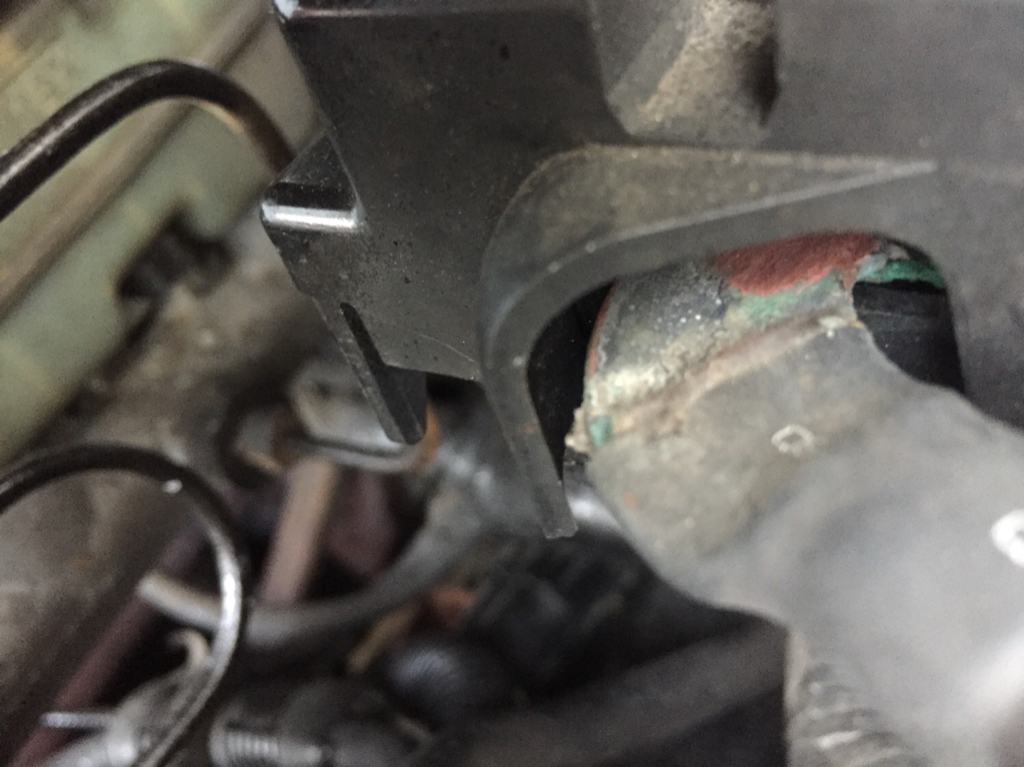 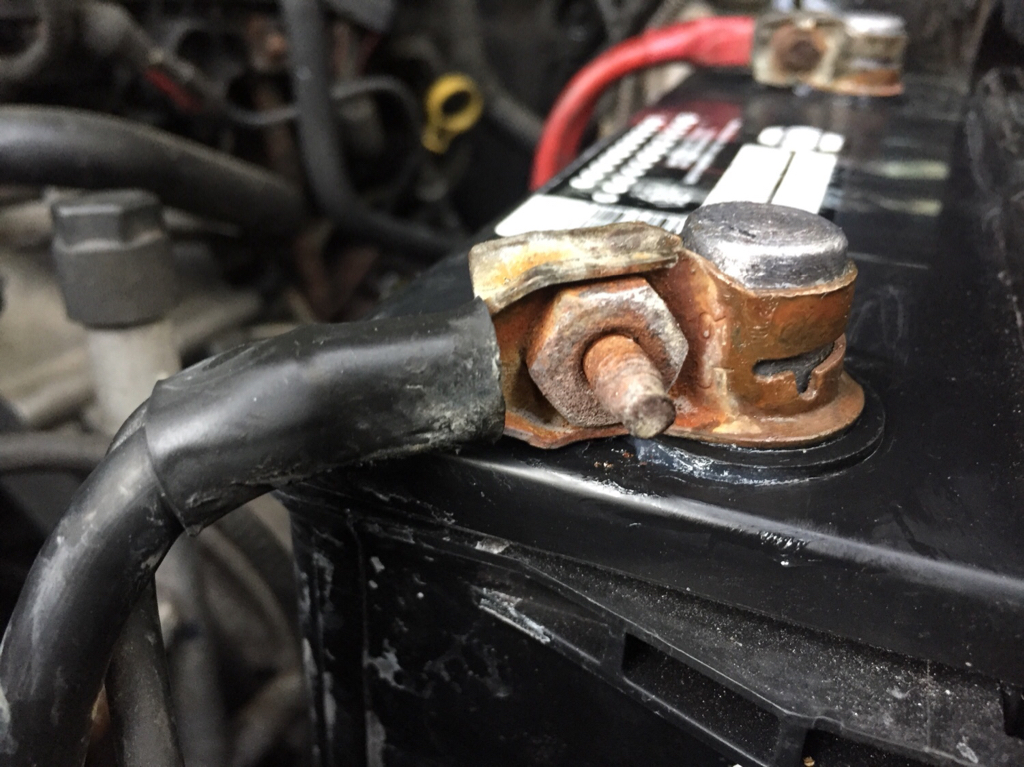 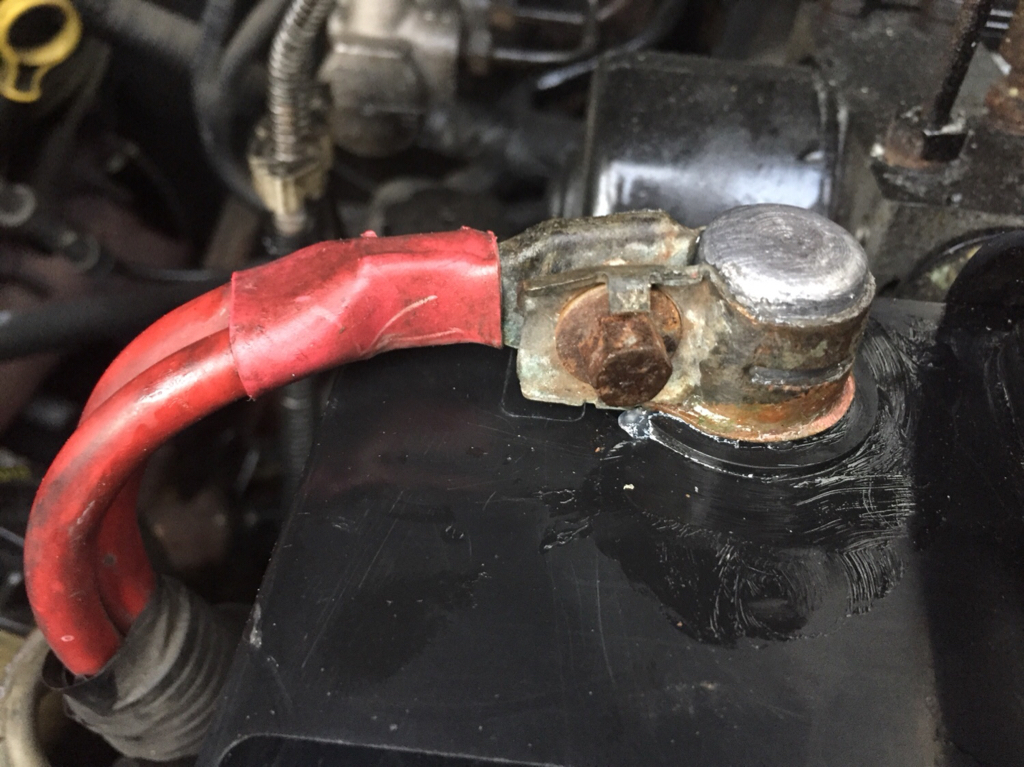 Its a Volt Gauge, not an Amp gauge

measure battery voltage key off
New battery should be 12.8volts
Start engine
Battery voltage should now read 2 volts higher, so if battery was 12.8 then it would now be 14.8v
it should stay that way for only a few minutes, alternator is ReCharging the battery after starter motor drained it.
After 5 minutes or so alternator should drop voltage down to battery voltage +1volt, so 13.8v, and it will stay there until you shut off the vehicle.

Wow that is super helpful- thanks so much. I ran through all these checks and I guess my situation is totally normal. I must not have noticed the fluctuation before simply because I never had to pay attention to it before. As a plus, now I know how to check my battery every winter.

I replaced the alternator on mine one time, and right away I noticed the voltage gauge started fluctuating a lot (and I could see corresponding changes in brightness of the lights as well)...
Turned out, the (Chinese?) voltage regulator on the new alt was either defective or inferior quality, it wasn't able to compensate quick enough for changes in engine RPM well, especially just coming off of idle. I took the Motorcraft regulator out of the old alt that was still good, put it in the new alt and problem went away.

Something to look for anyway, I'm not sure how common this is.

It's not the Chinese made parts that are the issue, its the Testing, the Quality Control, that MOST of us are not willing to pay for any more

They have the same machines, automation and ability to make most parts any where in the world now, so they do, and do it as requested by the "brand" of the part.
Motorcraft has all parts tested, so fuel pump is $500
3rd party might test every 50th pump coming off the assembly line, so $150

Difference is not all labor for testing, all parts in the fuel pump must also be documented as to the source of the metal and plastic used, Ford doesn't want child labor issues coming back to bite them in the A$$.
Also tolerances in assembly and electrical parts are less "flexible" with Motorcraft than 3rd parties.

"American made" had Quality Control, and some still do, but if its Cheaper, then Quality Control is the first thing that gets reduced to reduce the cost, they just extend warranties.
Which is not a bad deal for DIYers, if its a simple part to change and 1/3 of the cost of Motorcraft then save the money, and swap it out under warranty if it fails.
Make sure to get 2nd warranty period, if possible for replacement part, some do some don't

Auto Shops pretty much have to use Motorcraft or OEM parts that still have the Quality Control testing, because they have to PAY the mechanics if a 3rd party part fails under warranty.
Last edited: May 31, 2018

Wow - this is interesting about the alternator regulator. I wonder if I should worry about my new part failing sooner than it should or not. I thought Napa was supposed to have good parts, damnit! I once bought a cam chart sync from them and it didn’t fit, but the autozone part did.

That’s 2 bad parts from Napa, and interestingly, not one bad part from autozone!

The regulator I had never actually "failed" (as in stopped working entirely), it just was unable to hold the voltage steady when the engine RPM was advanced past idle (also it would fluctuate abnormally when there was a change in electrical load).


Quick test:
At idle (after warm-up), step on the gas and quickly bring the RPM up around 1500-2000. Does the volt gauge bounce up, then come back down after a half-second? Same thing happen when you shut the lights off? That is what mine was doing.

Apparently the regulator had a very slow time-constant and could not respond fast enough to varying load conditions.

The regulator I had came in a rebuilt alternator from a local independent alternator shop that supposedly had a great reputation. There were no markings on it other than a dot-matrix-imprinted lot code. The shop's tester apparently couldn't test it's response time (it always just said "good"), so I couldn't get anywhere with them (i probably should've just showed them the gauge with it in my truck, but I just said F-it... I knew what the problem was and had a spare I knew to be good, so I just swapped them. (FWIW, the alternator itself has been fine, just the regulator was cheap junk).

And to the other poster... cheap crap like this is a bad deal for ANYone. Sorry, but I have no desire at all to annually tear my truck apart to replace fairly major items such as alternators or fuel pumps just because the POS comes with a lifetime warranty. I would rather replace something and then not have to worry about it for at least as long as the original part lasted.
You must log in or register to reply here.
Share:
Facebook Twitter Reddit Pinterest Tumblr WhatsApp Email Link