A not so simple ranger

I had to leave the camper at a friends house not the old lady, I know some of you may think I made the wrong choice

Are you sure it is charging?

Agreed, that it sounds like you may have a charging problem.

Hard call on the tanks. On one hand, "all new" sounds good, but I have found that good (i.e.- serviceable) original parts usually are MUCH better than anything made today. If it were me, I'd drop the original tanks, inspect and find out what you're dealing with, and then make the decision to clean or replace. I'd also go through and repair or replace the entire fuel system, especially considering the original was tapped into somewhere for the generator.

And seriously, Congratulations on getting it. That's a real nice camping rig, and I would jumped all over it if it were me.

You probably know this already, but any older vehicle will need some repair and maintenance. The advantage of an older "classic", though, is that they're relatively easy to work on compared to the newer vehicles. And to say nothing about what a new rig like that would cost.

MattrickSwayzee said:
I had to leave the camper at a friends house not the old lady, I know some of you may think I made the wrong choice
Click to expand...

Heck no!. Great find and buy. I love that it is fully equipped.

Besides, the things you're forced to deal with now are things you should probably take care of anyway. It's just a shame you couldn't get it all the home where you could operate in more friendly territory.

WOW, I had a great thought. What if you could put the wife in it and get rid of them both!!! Ok, that’s my fantasy...

Sounds like a boat. The best two days of owning it or the day you buy in the day you sell it.

On a serious note, if there’s no corrosion on the tanks I don’t know why you would replace them. I had to go through the diesel tanks on my F250 a short while ago. It’s sat for a couple of years while my leg was injured. The gas gauges were kind of funky. When I dropped the tanks and pulled the fuel suction lines and sending units, they were a little corroded and gummy. It’s fairly easy to pop off the cover of the sending unit, and very gently clean the coil, but more importantly I used a tiny Dremel moto tool wire brush and I took all the corrosion off the steel housing that the Contact rides on. I secured them back with tiny zip ties.

I also replaced the pick up screens. Sending units were about $100 each, so I saved that and the screens were only about 10 bucks as I recall. Still working perfectly. I enhanced the grab of the new screens by putting a hose clamp around where it slides on the metal tube. There has been a problem with some of them falling off, and you lose a third of your tank capacity.

I never did it before, but now I swear on Seabreeze. If you Google “hot soak with Seabreeze” you can see how to put it in the gas tank at a certain point, run the truck a little bit so It gets sucked up into everything, let it sit for a while, and then run the truck to run it out of the system. Again mine is a diesel, but after I did that, it’s the best its run in 15 years.

Getting started, Ford has these funky quick disconnect fittings that you have to use a little special tool to pop loose. I struggled with it for days and read online where a lot of other guys struggled with them for days. Then I read that if you soak them with penetrating oil, they’ll work properly. So I soaked them with the penetrating oil and let them sit a couple days. I had beat my hands up in the tight quarters trying to get them loose. After spraying them and waiting a couple days, they popped loose so quickly I banged the other side of my hands!

While you’ve got the gas tanks out, it’s always advisable to replace the vent tube, they get stiff and they shrink. And if it’s like mine, on the end of the vent tube there’s a little plastic fitting that has the pinhole to vent the tank. I read many guys drill out that pinhole just a hair bigger, and then they make sure they hang the vent were no mud or dirt will get into it. So you use a little bit more line, I used vacuum tube, and I relocated the vent a little higher.

When I pulled my tanks, there was some trash in them that can be hard to reach. I stretched out a coat hanger and wound around a crumpled up old face cloth, and used it like a mop to reach into the tank and wipe out all the goo and liquid stuff. After the tank was free of vapors, with some PVC pipe, I rigged up like a 3 foot long snorkel for my shop vac, and I easily cleaned everything out of the tank.

I’m in Atlanta so rust isn’t really a big issue, but whenever I do anything like this, especially if it’s not seen, wherever there’s a rub point or wherever there’s any surface rust, I clean it up and then I bathe it in rustoleum.

oh, and I used about a 3/8” x 3 or 4 foot piece a vacuum hose to siphon the old fuel out of the tank’s. That kind of hose always has a curve in it. If you keep track of that curve as you put it in the tank through the fill neck, you can get it right down to the bottom and actually pull out 99% of the fuel before you take the tank down.

And just a general statement, if you don’t hit your head on the frame or the trailer hitch about 10 times, and if you don’t bleed, you’re not doing it right. And you’re only allowed to say “ouch“ if you bleed...

I thought it through, and I decided to replace both tanks, sending units, the fuel tank switch, fuel lines, pump, and filter. Several reasons led me down this path, for one I really do plan on using this thing for a long while, and don’t want my first attempt to clean a gas tank to cause me problems way back in the woods sometime in the future, another reason is it’s 90 miles from my house to the parts store and 50 miles from there to where the camper is parked so if I have to make more than 1 trip to the store I’m going to waste a lot of time driving around, I also got all this junk through my buddy at the parts store so I got a little discount. Anyways thanks for all the help from everyone that offered advice, I’ll give a few pictures when I get it home, and then I won’t bug you guys on the ranger forum about something that’s not a ranger anymore.

MattrickSwayzee said:
I won’t bug you guys on the ranger forum about something that’s not a ranger anymore.
Click to expand...

Sounds like you have a good plan, and I agree with your thinking on "all new".

Please do keep us posted, and like most of us, I'd love to see pics of your progress. And by all means, stick around. Your rig is about as close to a Ranger as you can get. Good luck!

Man, that thing is wild! I love it!

Well I went back for the camper, put new gas tanks, sending units, fuel lines, and pump in it. And then I was all excited to start it and it still ran like crap, so I finally got the rebuild kit for the carb today and put it together, and got all excited again, and it ran bad still, then I saw the hack job on the egr “modification” they did, when I sprayed a little carb cleaner down the hole and saw steam come out where the egr valve is supposed to be. So I made a nice metal plate for that hole and used some of that cut to fit gasket maker to block it off proper, and now she runs like a dream. I only got one new picture of it as it was getting dark as I was finishing up. 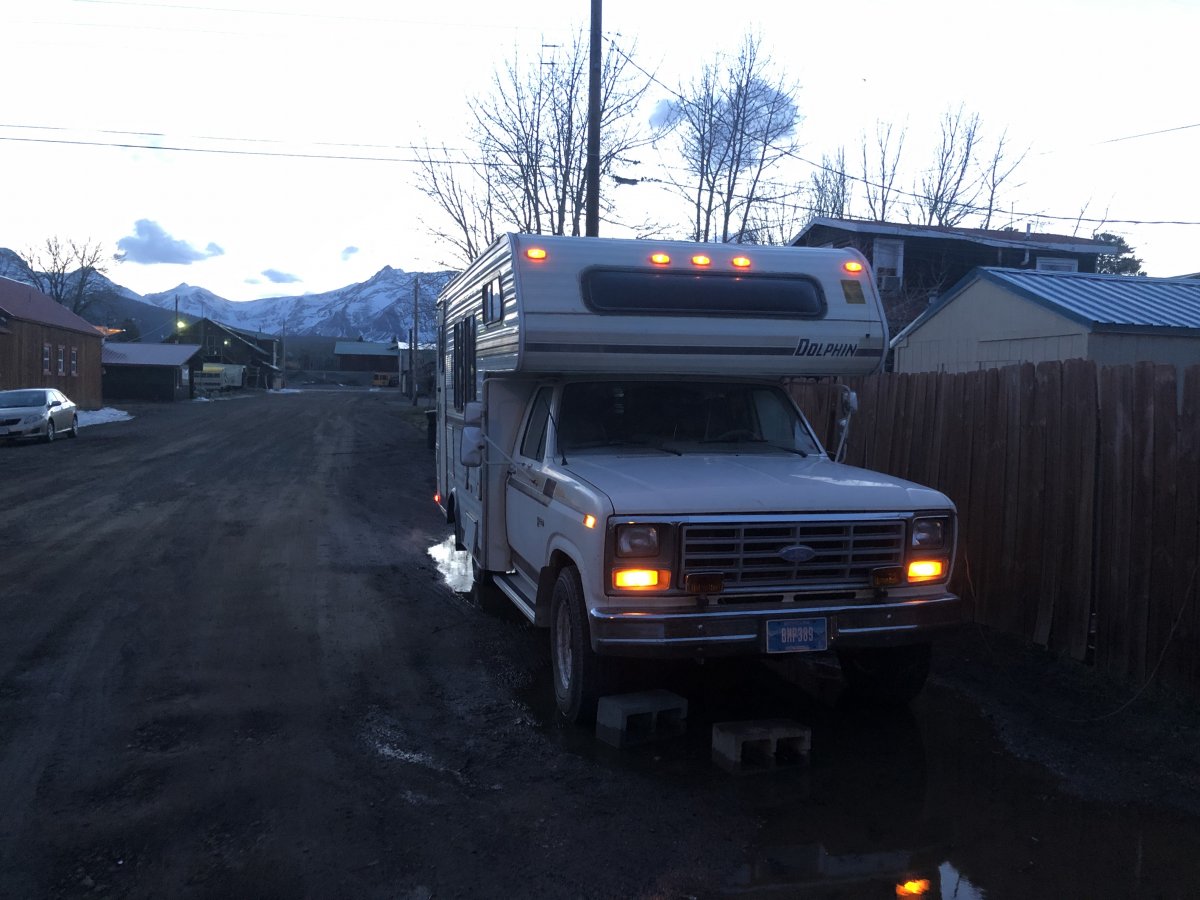