98 Ranger stuck in 4x4 or possibly dead transmission. Or both.

My Ranger started acting terribly over the weekend. We used the 4wd low to pull out some bushes at the end of the week. The next day it was driven about 5 miles and on the return trip started acting poorly. The engine revs but there is no momentum. At first, on that trip, it seemed to want to ship up in gears, but still wouldn't get above 45mph. Since then it has only gotten worse and won't get above 10mph.

It's hard to describe how this thing feels when driving. I think the 4x4 might be engaged and stuck that way. I thought it felt as if the front wheels were giving power despite being switched to 2wd.
Also, it felt like the transmission fluid might be low because there seemed to be little power no matter the RPM. The dip stick indicated that it might be low, so we added a lit bit, but we haven't seen any improvement.

I jacked it up off all four wheels and put it in drive and 4wd low to see if all wheels spun. Only the back two wheels spun, however the front axle and driveshaft were spinning. I'm going to try this later in 2wd.

About this truck:
1998 Ford Ranger XLT 4x4
3.0l V6. 4r44e transmission
a little over 200,000 miles (I replaced the dash with a white one from an explorer a year ago. This also means I don't have a 4wd light)
It's likely way past due for a transmission filter change.

Problems:
- Won't go above 10mph no matter the rpm.
- Feels as if the transmission is empty?
- Also feels like the front wheels sometimes have power, even in 2wd?
- No clicking sound when the 4wd switch is rotated to any setting (used to make a clicking sound)

Assuming the truck is stuck in 4wd hi or low, and I remove the transfer case motor, how do I manually switch it to 2wd? If I do that, will the transmission also be able to shift, or is there an electrical signal that the transmission needs to receive to know drive normally?

I checked all of the transmission lines and couldn't find any leaks, so the transmission should have sufficient fluid and pressure.
Worst case scenario is that a clutch pack in the transmission has burnt out or broken. I'm hoping that since this all happened after using the 4wd heavily it is more likely to be a 4wd drive problem or an electrical signal related to the 4wd.

My 93 shift motor just attaches to a triangular shaft on the transfer case, which it turns while shifting to each setting. I believe the motor is just there to turn it, in leu of a manual shifter 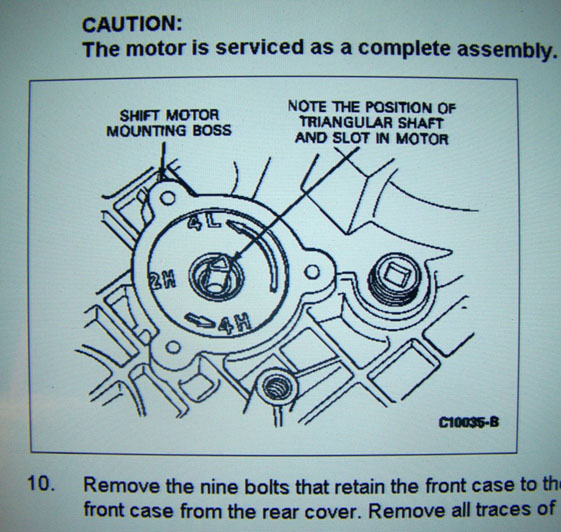