I started working on this project a couple months ago, and I decided to share my progress. I have a 2000 Ranger Extended cab and I’m in the process of swapping in a 5.0 out of an explorer, as well as a Dana 44 front axle and 9 inch rear axle. I’ve done the 5.0 swap before, but never a SAS so well see how it goes. I named the truck "Half-Pint" after Laura Ingalls
Last edited: Jul 3, 2019

This is where I started 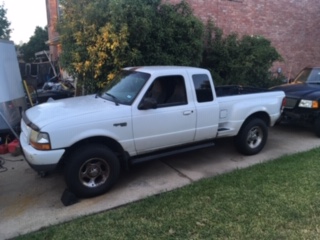 At this point I have removed the Engine, Transmission, and the entire front suspension. I have also replaced a lot of the body parts that were damaged, and installed a three inch body lift to help clear the bigger transfer case. I also got a pretty cool bumper from Affordable Offroad
The hood, fenders and header panel are off an 04. To make the hood fit, you have to use the drivers side hood hinge off the 04. The headlight harness is also different, havent fixed that yet, but will post if I figure something out 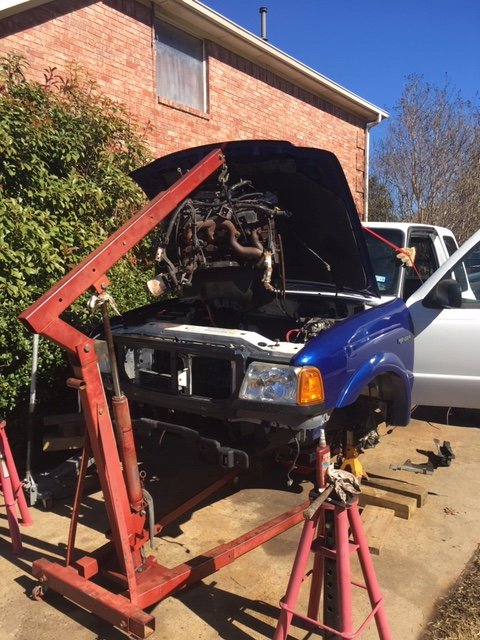 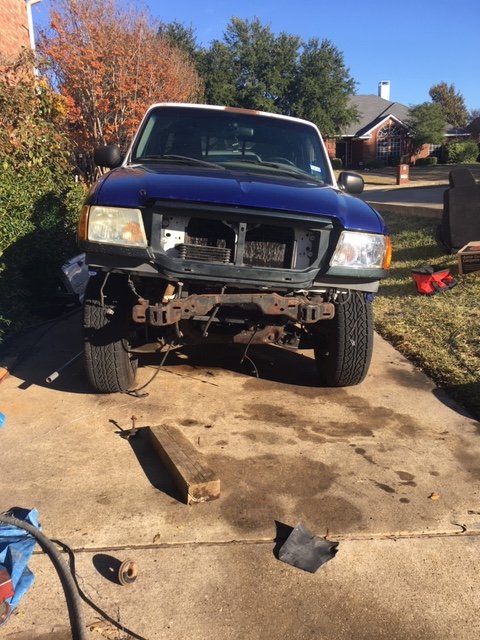 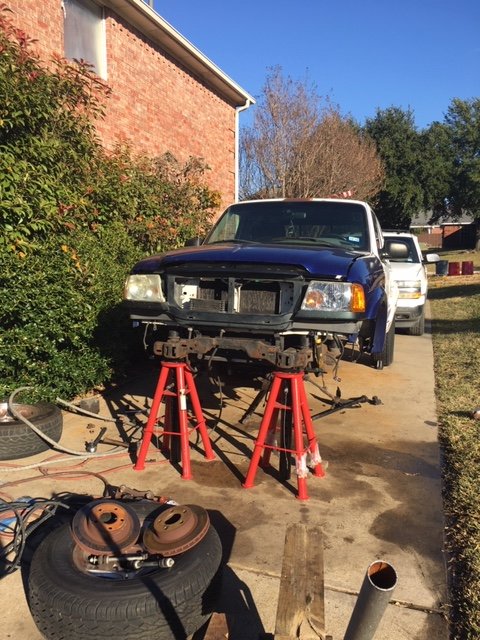 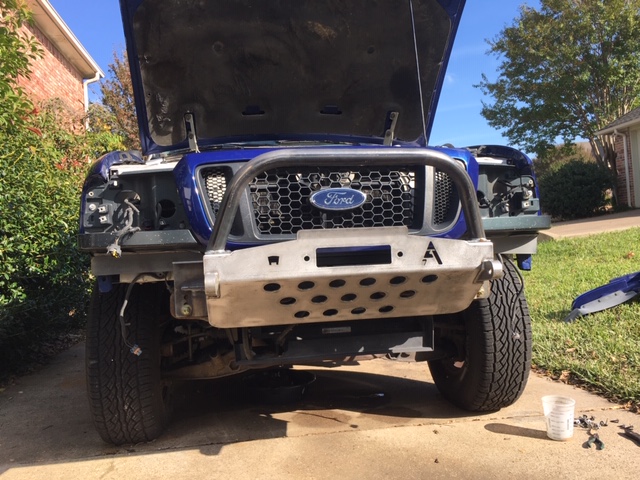 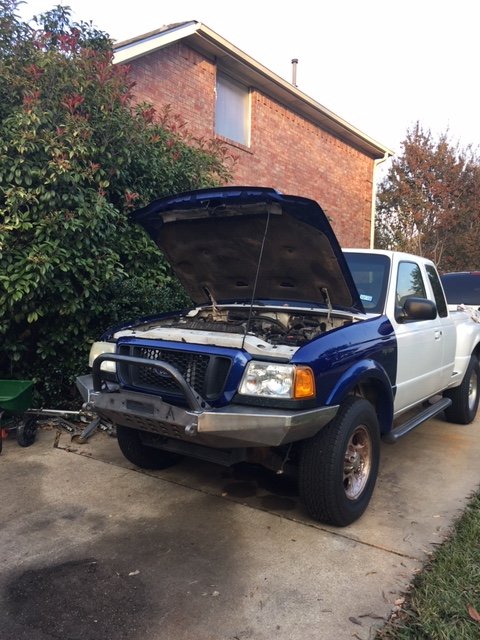 This is about where I want my ride height to be when its all done. Got some 35s for it and put one under to see how it would look. Also attached is the new transmission and transfer case. Transmission is a 4R70W automatic out of a 97 explorer, and the Tcase is BW 1356 out of an 87 Bronco.

Not shown, picked up some 64" chevy leaf springs from a junkyard, as well as some driveshafts out of the 87 Bronco 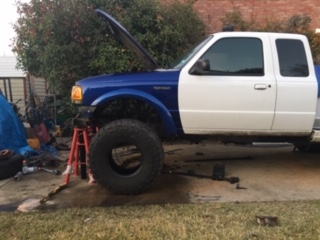 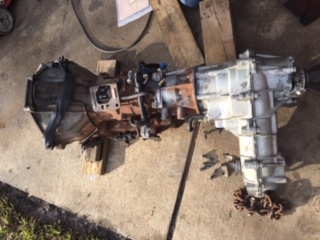 My credo
It is what it is

Pics work better if you hose them somewhere are remote link them.

If you are interested (and I am unsure of the compatibility with your era of truck) second gen Explorer hood hinges have gas shocks. For the older trucks you use two of the same side from an Explorer.

Do you plan on keeping the new to you diffs full width or are you planning on getting them narrowed?

You mentioned 64” chev springs. Do you plan on using them for the front or replacing the stock rears for longer ones and doing a 4 link up front?

I’ve built a few jeeps in the past but that’s cheating as they’ve already got the solid front axle. New to this ranger thing and once I build a garage, it’s SAS and v8 time for mine. I live in northern Ontario Canada where it snows 5 months of the year...

Sorry I haven't been on in awhile. Some good progress! Got the front suspension cut off and plated the frame, and put the rear end most of the way together. Im using an 8.8 axle temporarily, the 9 inch is gonna take some work to get ready. 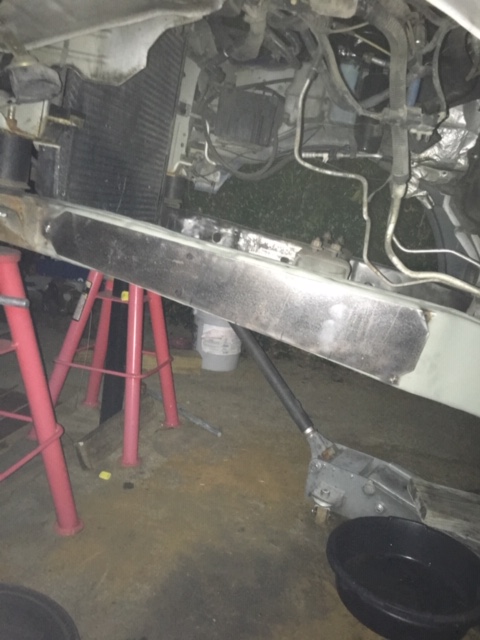 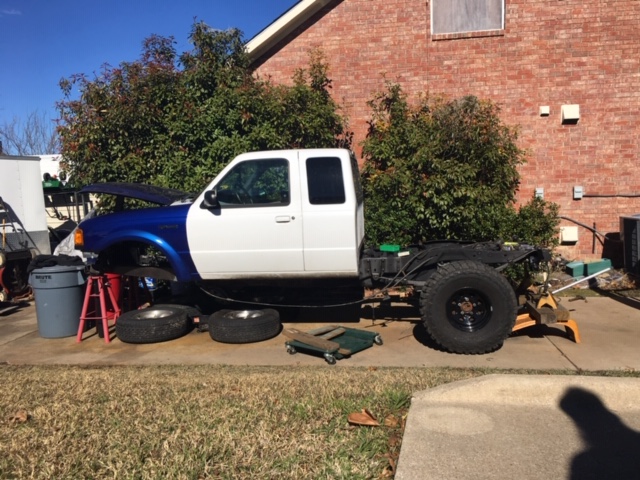 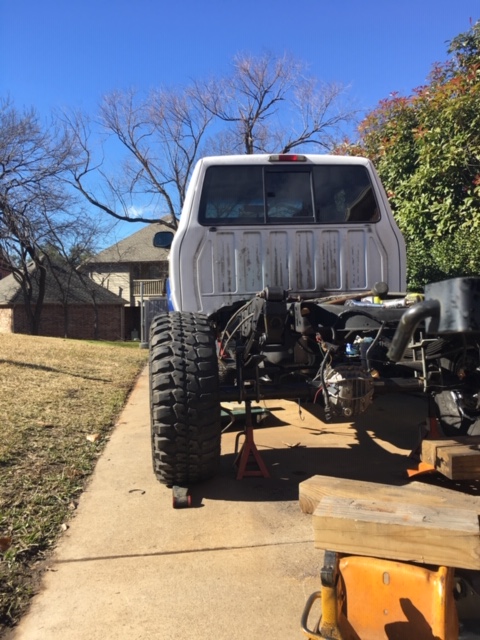 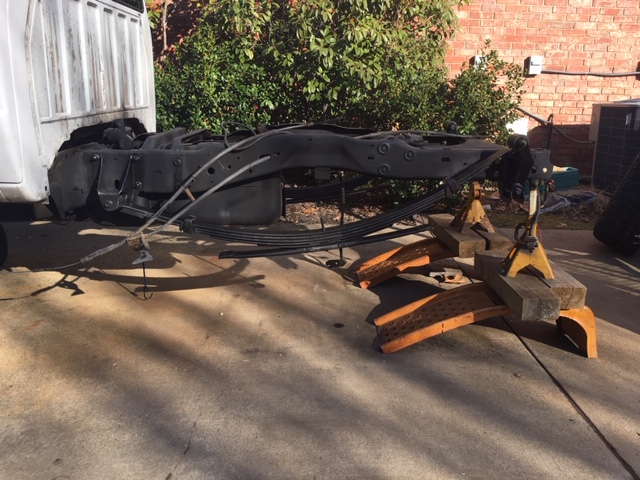 Also made some radius arms

Welded on some coil buckets, put a bed on it, and started the engine/transmission install. The 1356 is a little bigger than the frame could handle, so I had to notch it a little. Will go back later and reinforce the frame there.

Also picked up a camper shell on craigslist. This thing is gonna be tall! 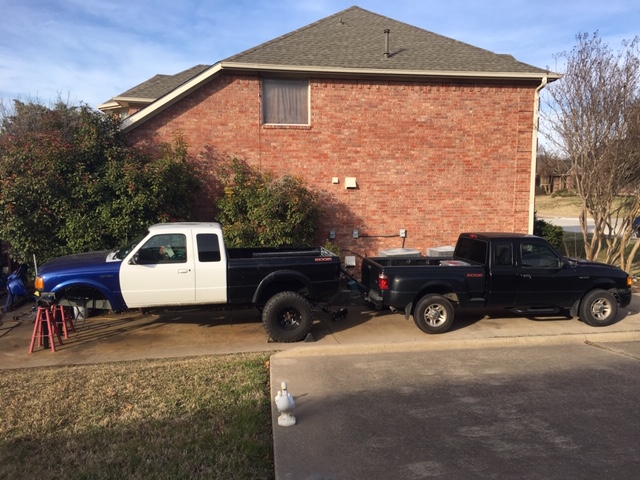 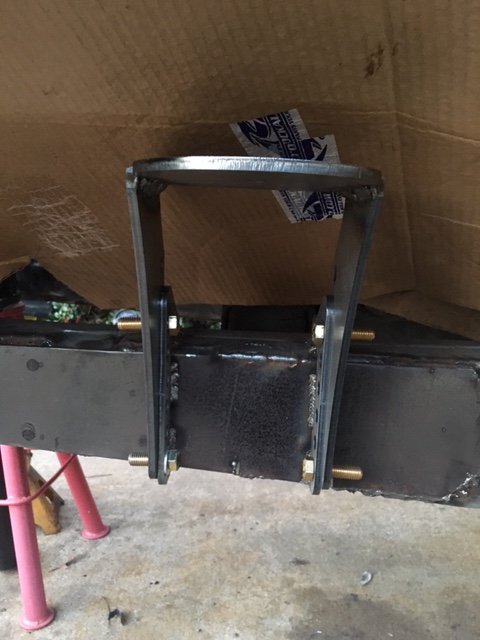 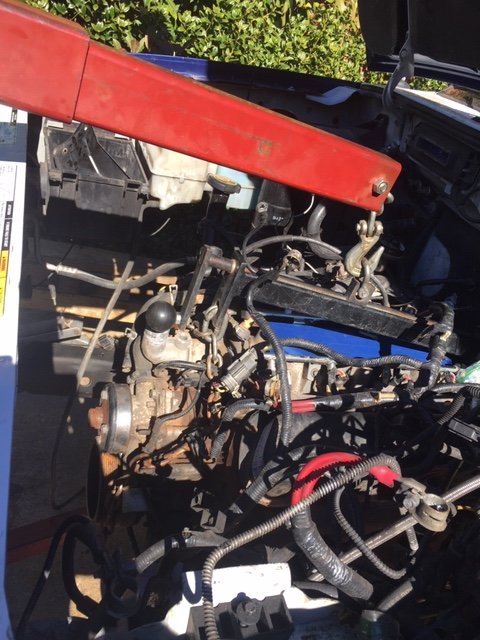 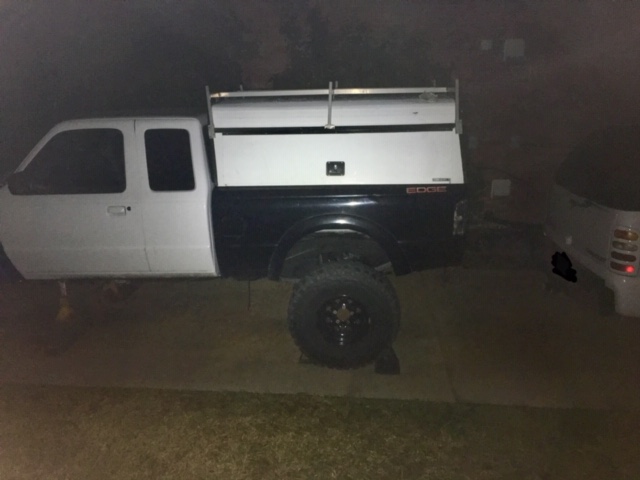 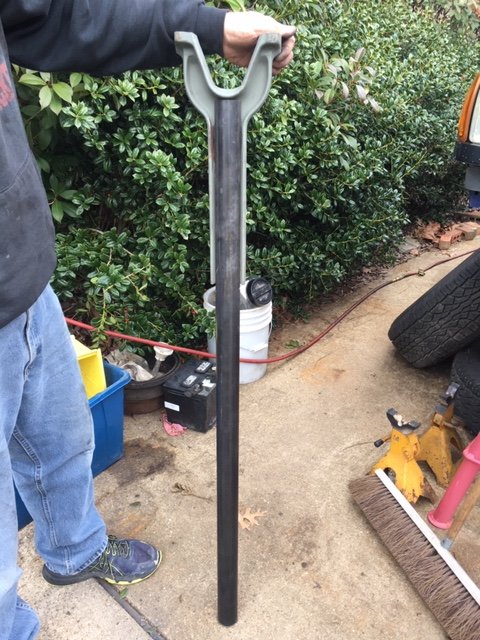 Macneil87 said:
Do you plan on keeping the new to you diffs full width or are you planning on getting them narrowed?

You mentioned 64” chev springs. Do you plan on using them for the front or replacing the stock rears for longer ones and doing a 4 link up front?

I’ve built a few jeeps in the past but that’s cheating as they’ve already got the solid front axle. New to this ranger thing and once I build a garage, it’s SAS and v8 time for mine. I live in northern Ontario Canada where it snows 5 months of the year...


Sent from my iPhone using Tapatalk
Click to expand...

I am planning on keeping the axles full width. Sorry Im kinda late responding. The Chevy leaf springs were for the rear end, its a pretty simple swap and makes a lot more travel. The front end is basically going to be bronco suspension, so radius arms and a track bar.

What did you make your radius arms with? I work on a lot of super duties and hate the damn radius arms lol.

Those 64” springs look like they pushed your rear axle back a couple of inches?

Ultimate plans for my 98 are a 60 front out of a super duty with leaf springs and a 14 bolt disk for the rear. Ya it’s big but I’ve done some 3/4 ton swaps on Jeeps and always said next time I’m going right to the big diffs. Like I said earlier, I work on super duties at work all day and we have plenty of scrap ones sitting around.

Following your progress to see how those radius arms work out for you. I’m thinking 3 link or leafs. Leafs are easy, 3 link is a bit of thinking for our generation of trucks.

The radius arms were off a bronco. I cut them in half, split them, and welded some dom tube on to get them longer.

From what Ive seen, the bronco radius arms work pretty well cause they have that rubber bushing that allows them to flex a little. Im gonna use Johnny joints on the frame side, so that should help a little as well. I guess well see what happens, Im no expert

The rear leafs may have pushed the axle back a tad, it doesn't look like itll be an issue though. if it is ill move the axle forward on the perch.

More progress. The front axle is mocked up underneath with the springs (axle still needs to be set up, just put the knuckles and hubs on for now). Ride height is right where I want it. The radius arms aren't attached to the frame, and Im using ratchet straps in place of a track bar, so its still on jack stands for now. Those 35s on the full width axles look mean!

Had to cut out the stock trans crossmember, it was in the way of the front driveshaft. Bent up some pipe I had laying around for a new one, it seems like it'll work pretty well. Im not the best fabricator so Im pretty proud of it lol.

Also forgot to mention, I got it running a few weeks ago! I still need a throttle cable and some other minor hoses, but other than that the engine is installed. Apparently nobody makes replacement throttle cables for the Explorer 5.0, so Im gonna have to find one at junkyard. Hopefully itll move under its own power soon 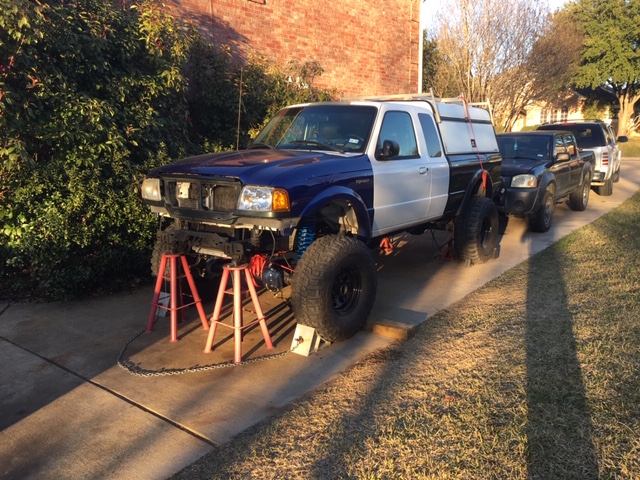 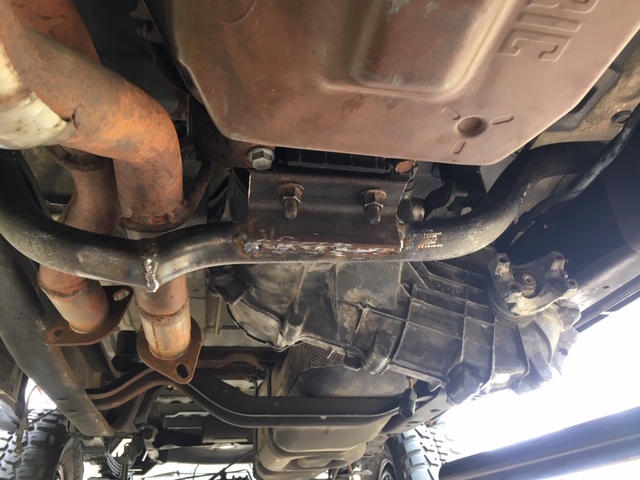 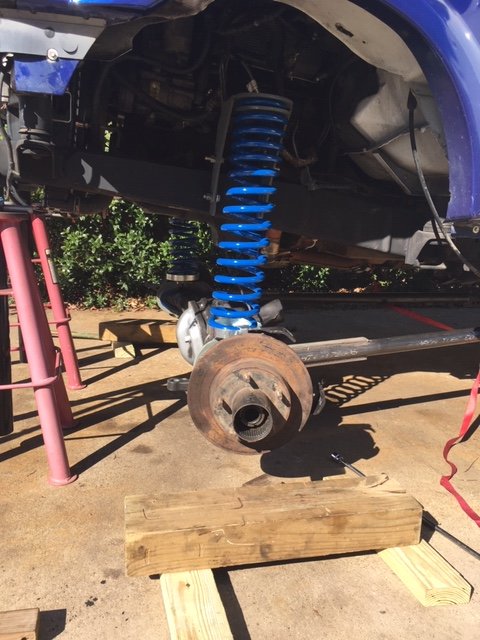