I think it's about time I tackle what I hope to be the last part of my cooling system saga. Initially, the thermostat was stuck open so I changed it, the water pump, and hoses. That allowed the engine to heat up properly again but the increased pressure made the radiator leak and after replacing that, the intake gasket was the next weak point. Well, that's been done and the front cover decided it wanted it's turn. I've been losing coolant for a while now, enough to need a top-up every week or two, but haven't seen any leaks or puddles like I did when the intake gasket went out so I've put it off. Today, I had the front end jacked a bit and could see the coolant running from where the cover meets the block, which was a bit of a relief because I've started worrying that maybe there's an internal leak but the block test I did a while back was good so maybe I'm thinking too much about it.
Anyway, I've seen advice here and a watched few videos about replacing the cover seal without pulling the engine so I'll go that route. But since I'm there should I replace any timing components? At 329k, they're likely worse for wear but I don't have any noise from them, aside from a rattle when getting on the gas at too low an RPM. If I should change it I'd like to do it now but if it's something best left alone, all the better. Any opinions or experience with the OEM set's service life?

hi, Personally I wouldn't change just a chain, you should change chain and all sprockets together. Old chains stretch and wear into the teeth of sprockets all as a set. If you change a chain and leave old sprockets you could actually throw a set out of time. I know this sounds strange, but it could happen. I won't say it will, but it could. The OHV 4 has a good spring system to keep tension. at 329K miles, and you have it apart anyway, I would definitely give the system a strong look over.

(added) getting the bottom sprocket off the crank with the engine still in the truck will/could be a nightmare. I just reread this. cheers

and, welcome to the TRS web site and forums.

I guess I'll get the parts and see how it looks. I suspect the chain is fine but I sort of want to change the tensioner and guide unless there's good reason not to, as if not having problems isn't a good enough reason to leave it be. I'd just hate to have to pull it apart again.

Also, most posts I'm reading don't mention whether the oil pan gasket is cut and spliced, replaced with RTV, or kept in place. Assuming mine will break, do I need to get one to cut new pieces from or just seal it with silicone? Trying to splice a gasket seems like a bad idea.
Last edited: Oct 24, 2021

It's not super difficult to do the seal with the engine in the truck, just takes a ton of time. The main things are (1) use a Ford gasket, and (2) the cover must be aligned with the crank, don't just bolt it on and call it good. I have used the balancer to align the cover... loosely bolt the cover on, slide the balancer onto the crank and make sure it's in a happy place in regards to the seal, that way it's not slid off to one side.

I doubt your oil pan gasket will break, 93 may have the "new" style oil pan gasket that's half metal anyway... just be careful when removing the timing cover. Couple dabs of silicone in the corners where the block, oil pan and timing cover come together will help upon reassembly. 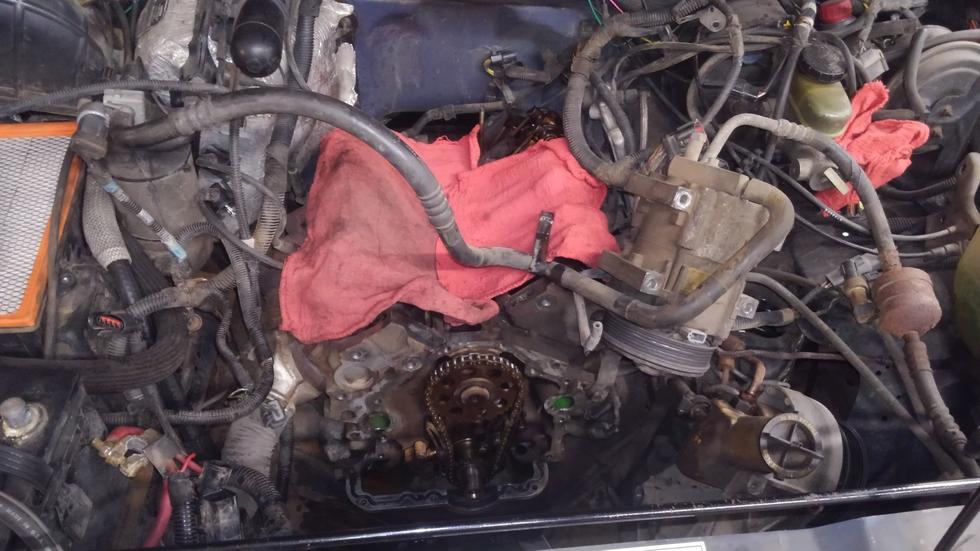 And this is probably where your leak is coming from. 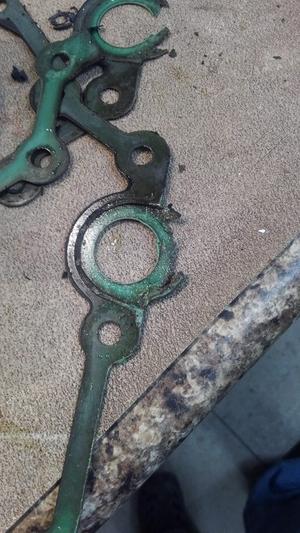 Thanks for the pics. Looks like the cover comes off pretty clean with the OEM gasket, which I've read is the way to go and will be using. Mine is definitely leaking from the passenger side where the groove is. I cleaned it a bit earlier and confirmed coolant trickles out. Now if it'll just hold 'til I get three days off in a row...
You must log in or register to reply here.
Share:
Facebook Twitter Reddit Pinterest Tumblr WhatsApp Email Link