The steering is done, the double-D showed up in the mail on Friday. 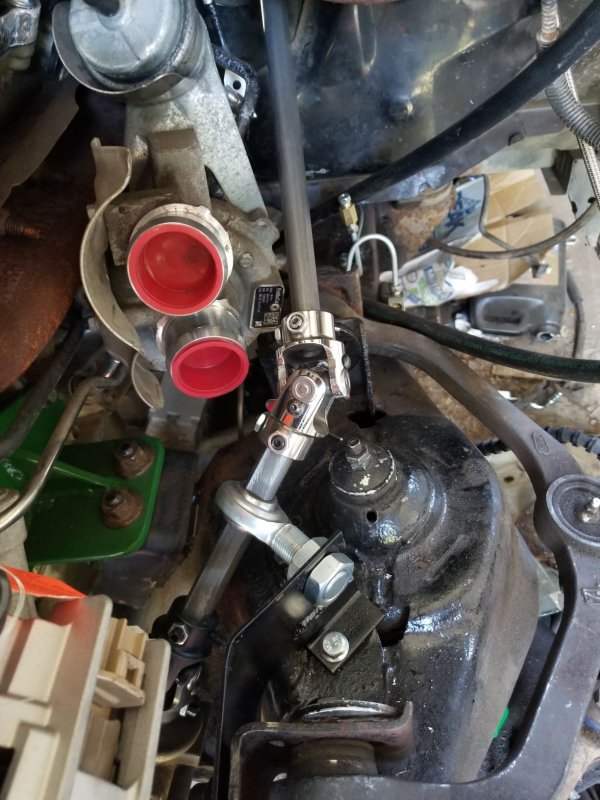 I should be excited, but I have run into a rather large set back...

I am working on mounting the radiator. The radiator dictates the location of the intercooler, and to a lesser extent, the airbox. I have the radiator mount as far forward and high (want to get the intercooler under it) as I can. It won't go any farther without completely cutting up my brand new core support that I just installed. I got the lower mount temporarily installed and though I would see how much clearance I have around my cooling fan, and the answer was none. There isn't any clearance around my cooling fan. I don't even have enough room for cold side tube to run up to the throttle body without the cooling fan installed.

It turns out that the engine bay for a late model F150 is a LOT bigger than a 2000 ford ranger. Who would have guessed.

This is forcing me into modifying and fabricating all the plumping for this engine in addition to finding how to add a cooling fan or two. I didn't think it would be this hard to do the swap. But it's been one major set back after another. Every time I freak out, wonder if I have just thrown all this money away for nothing, sleep on it, and come up with a solution, but I don't think I would recommend this swap in a ranger. Not if you aren't willing to completely remake the front end.

I still need to sleep on this one, so I am not calling it a BUST yet. But one of these times, I wish something would work like I had planned.

Most all intercooler installations end up requiring a lot of custom plumbing and it's almost always a fight to fit all of that plumbing in the vehicle. It all wants to fight for the same location.

Radiator, A/C condenser, and Core support are all mounted. I only pop riveted in the core support. Figured if I ever have to take the engine back out again, it will be a lot easier to drill out pop rivets then spot welds. 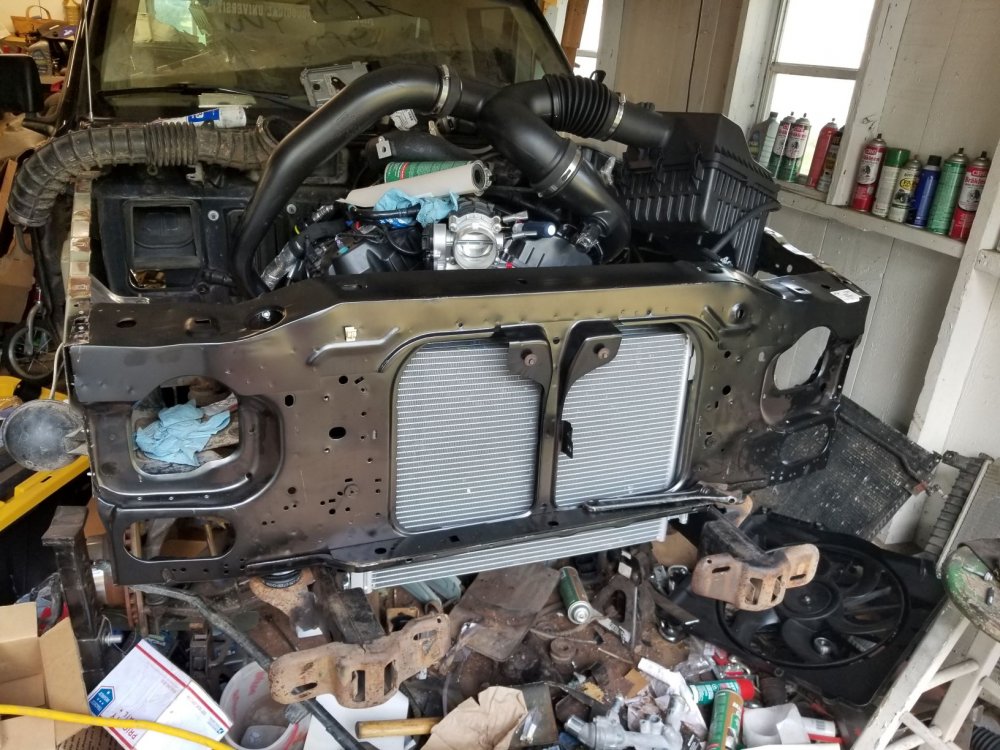 I am working on mounting up the intercooler now. Ford uses a o-ring seal on the outlet of the Intercooler making it a unique fitting (not just a band clamp), so I am trying to re-use the tube from Kit-bashed Mishimoto intercooler tube set. In doing so, the intercooler gets pushed way ahead of the radiator (almost right behind the bumper). From what I can tell, the only airflow it got on an F-150 was when it was moving, so I am not worried about air flow. Might make an Air-scoop in the bumper? just have to see.

hind-sight is 20-20... looking back, I should have just assumed none of the tubing was going to work. Then I would have moved the turbos and got the engine sitting lower and wouldn't have needed to mess with the steering like I did. I think it would have been a crap ton of work, but it would have been the cleaner installation. I would also try to find an intercooler that had a center outlet. the two hot side pipes would be on the ends, and dump in the middle. I might have also gone with the Taurus SHO intake as well. I would also try the 4.0L radiator, or make one that fits in the same envelope. Modifying the frame and making mounts for the radiator wasn't fun. Things I plan on noting for anyone else willing ( crazy (stupid)) enough to try the swap.

Intercooler mounted, not done, but mounted. 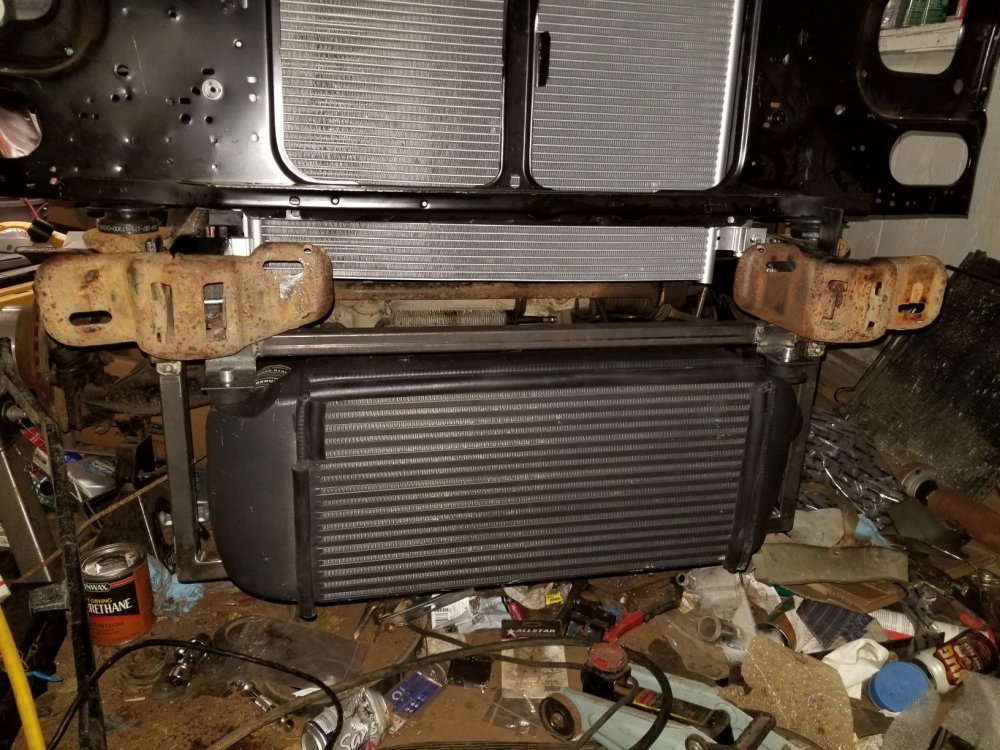 I still need to add a brace to keep it from being pushed back, then pull it apart to grind down all the sharp corners and paint it. Looking at this picture, it also looks like I need to spend an afternoon cleaning up the garage around the truck.... Didn't realize it had gotten that bad

It's hard to tell from the photo, but the front of the core is nearly right behind the bumper mounts and bout 10 inches in front of the AC condenser? That F150 engine bay must be HUGE for the amount of space between the Intercooler and the engine.

retep88 said:
Intercooler mounted, not done, but mounted.
Looking at this picture, it also looks like I need to spend an afternoon cleaning up the garage around the truck.... Didn't realize it had gotten that bad

You couldn't tell that from the previous post (#48)? Hell, the second pic (#49) looks like you cleaned up a little. lol

I started browsing this forum the other day looking for some info. I ran across this thread and had to sign up so I could see this finished. Keep up the good work!

I don't think I'd have needed a picture. Just the fact that I couldn't walk up to the truck without stepping on stuff would have clued me in.

Ya'll don't want to see what my work bench looks like... That has had many years of neglect piling up on it.

I have been out of town this weekend so I haven't gotten much done. Just finished off the intercooler bracket. It's got a first coat of paint and it will be finished off tomorrow, so I will get a picture of it then.
I may not have gotten anything done on the truck, but I did get "new" tools. 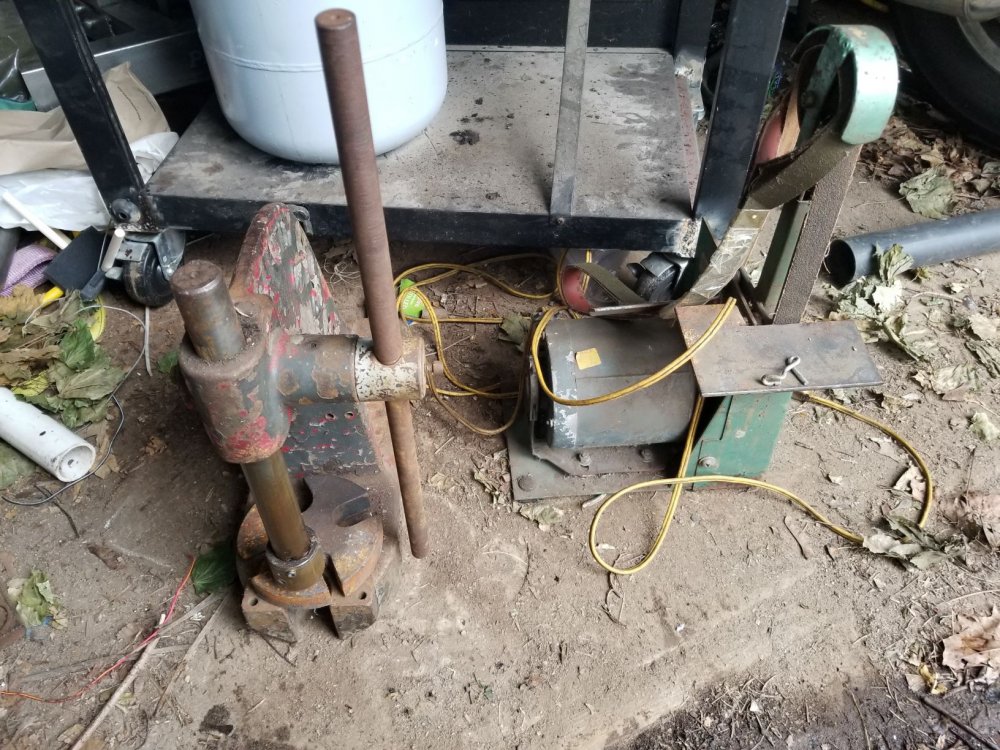 I was told that it was a 1 ton arbor press, and from how heavy it is, it's probably about right

. The other is a 1 inch belt sander. The sander needs a little work since it's on-off switch is plugging it in and unplugging it. They are rough, but I couldn't argue with the price; $25 for each of them.

Can never have too many tools.

Painted and ready to go. I'll finish the installation tomorrow and start figuring out were all these tubes are going to go. 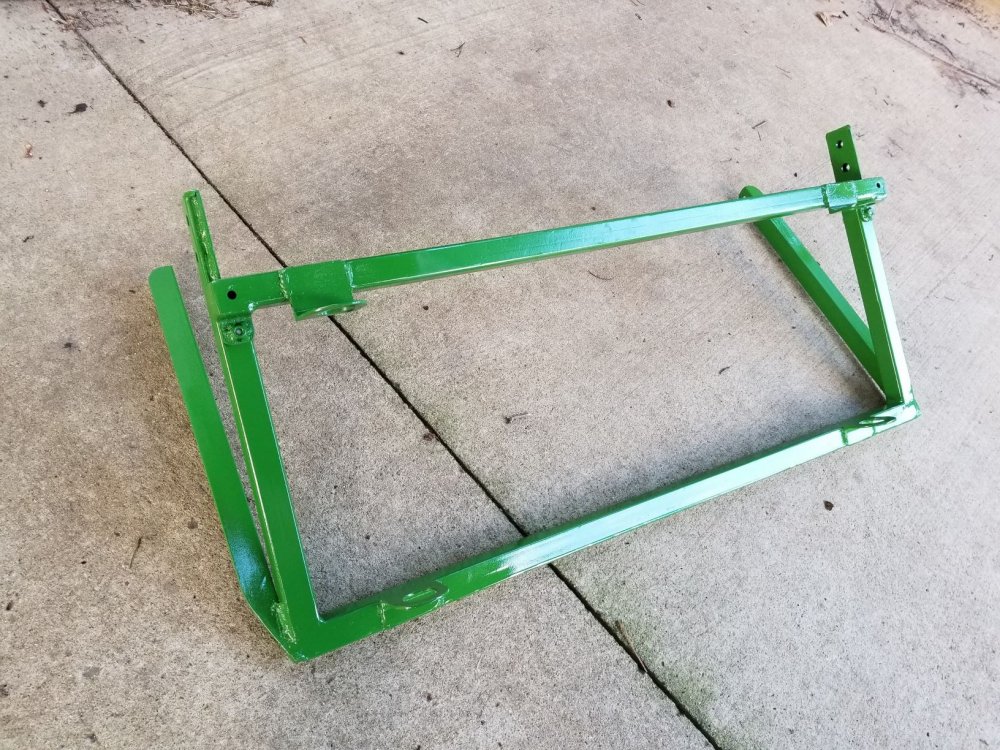 I like starting with nothing but a pile of steel and an idea to end up with this final, complex part. I just wish it didn't take so long to do. I just want to hear this thing run!

retep88 said:
Painted and ready to go. I'll finish the installation tomorrow and start figuring out were all these tubes are going to go.

I like starting with nothing but a pile of steel and an idea to end up with this final, complex part. I just wish it didn't take so long to do. I just want to hear this thing run!
Click to expand...

Hopefully it doesn't run like a 2cyl Deere with all this JD green paint...

85_Ranger4x4 said:
Hopefully it doesn't run like a 2cyl Deere with all this JD green paint...
Click to expand...

. This finishes off the Green paint, so the rest is going to be good old black.

Progress is going to be slow for a while... With custom plumping comes custom parts being shipped through the mail. I have been buying the stuff through amazon prime, so the shipping is still relatively quick, but I still have to wait for the stuff to arrive.

Tired working on the exhaust, but the studs are so rusted and nasty, I couldn't get the bolts on (if I even had the right bolts, I couldn't tell). So, I think I will just attempt to replace them, which would have been way easier to do if I had tried this when the engine wasn't in the truck

Thought I would move on to the cooling system, but I need a could of fittings for that too...

I did manage to figure out where and how I am going to mount the fuel pressure regulator and got the my hose lines routed, but I don't have the hardware to finish it off so it's just being held in place with a pair of vice grips.

I still think I am close there hearing this thing start up. But I am still have a while before it's going to be road worthy again.

Two steps forward, one step back...

Parts have slowly been trickling in. I was able to finish the passenger side Hot tube; I have all the tubing I need for the cold tube, just missing one coupler. The drivers side hot tube is still missing one piece of pipe that is supposed to show up on Tuesday. One of the radiator hoses is done, just missing the hose clamps, the other is still waiting on some 90 degree fittings to run to the oil cooler.

Some of the tubing I purchased had beads on them already, but a couple I had to buy without beads, or I had to cut the tube up, so I have to reform the bead. I have to do three beads in total. I tried calling my local speed/tuning shop, but they didn't have a bead roller. To buy a bead roller is $120 for a cheap one? Which, if I ever though I would need it again after this project I would have ponied up for. But I don't think I will need this tool again, so I made one! 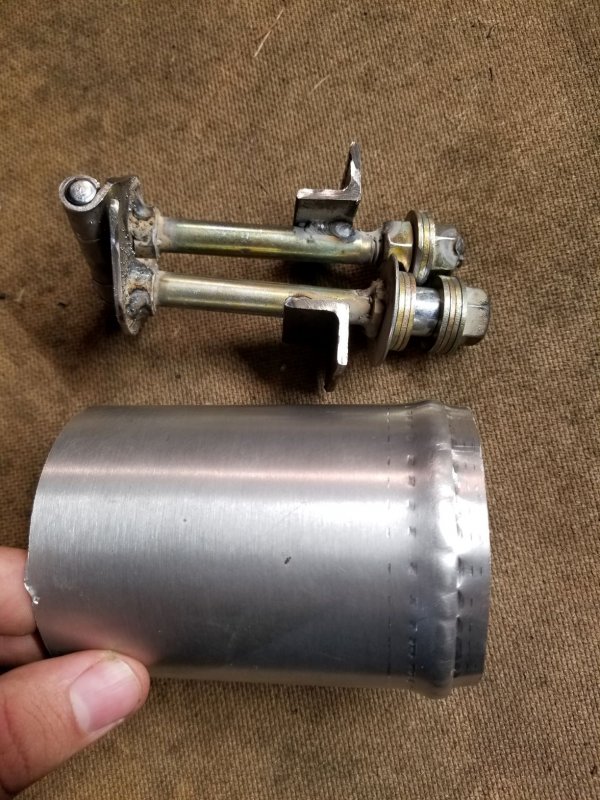 The contraption goes into my bench vise to apply the pressure. The original idea was that I would be able to roll it around on the washers, but there is just to much pressure. So I just ended up clamping - unclamping the contraption as I worked my way around the tube. Could have been better, but I am not going to complain about 5 bucks worth of grade 8 hardware and a hinge.

Ah, but the one step back

. There is a plastic coolant manifold on the back of the engine (not what ford calls it). It routes coolant between the two heads, the thermostat housing at the front of the engine and the heater core. The attachment point for the heater hose sticks out a funny angle without much support. When I bought the engine, the heater hose port was broken off. So I spent my $60 bucks and bought a new one from ford. Well at one point when I was installing the engine into the truck, the transmission slipped off the jack and the engine hit the firewall. I thought "oh ?, did I break that port?" A quick visual inspection said no, it was fine. Well, I was wrong, working on the coolant hoses, I put a hose on the port and noticed a lot of movement. I had cracked the plastic and now it's junk. The proper thing would be to just buy a new one and replace it... Again. But I am still in the denial phase.
You must log in or register to reply here.
Share:
Facebook Twitter Reddit Pinterest Tumblr WhatsApp Email Link