I was somewhat confused in the first post when the trailer wasn't red...

Looks good, I've beat the snot out of my harbor freight trailer, the tongue on yours is much nicer but the rest is very similar... my trailer is still sitting at my friends house with just under half a cord of firewood in it... I'm pretty sure it's exceeding it's weight rating...

I like your tiedown setup, when I built mine I didn't bother making it foldable but added 6 of the harbor freight 1/4" D rings to the deck which work good but more is always better...

I saw an thing on the internet the other day that Northern Tool is selling a trailer similar to mine when it was new. It might even be the same manufacturer. I do think the tongue setup is better than what Harbor Freight offers.

scotts90ranger said:
I was somewhat confused in the first post when the trailer wasn't red...

Looks good, I've beat the snot out of my harbor freight trailer, the tongue on yours is much nicer but the rest is very similar... my trailer is still sitting at my friends house with just under half a cord of firewood in it... I'm pretty sure it's exceeding it's weight rating...

I like your tiedown setup, when I built mine I didn't bother making it foldable but added 6 of the harbor freight 1/4" D rings to the deck which work good but more is always better...
Click to expand...

The tongue setup is what drove me to get the Red Trailer over the Harbor Freight. Plus, the seller was a small business in PA. I do prefer to shop small business when I can and it makes sense.

I installed an additional gas strut to prop up the lid. One wasn't enough. And it gives me a chance to show the completed tongue box up close since I never did take pictures of it close up before. The tires were also rotated and the axles lubed. Bearing buddies are an awesome addition if you don't have EZ Lube axles. 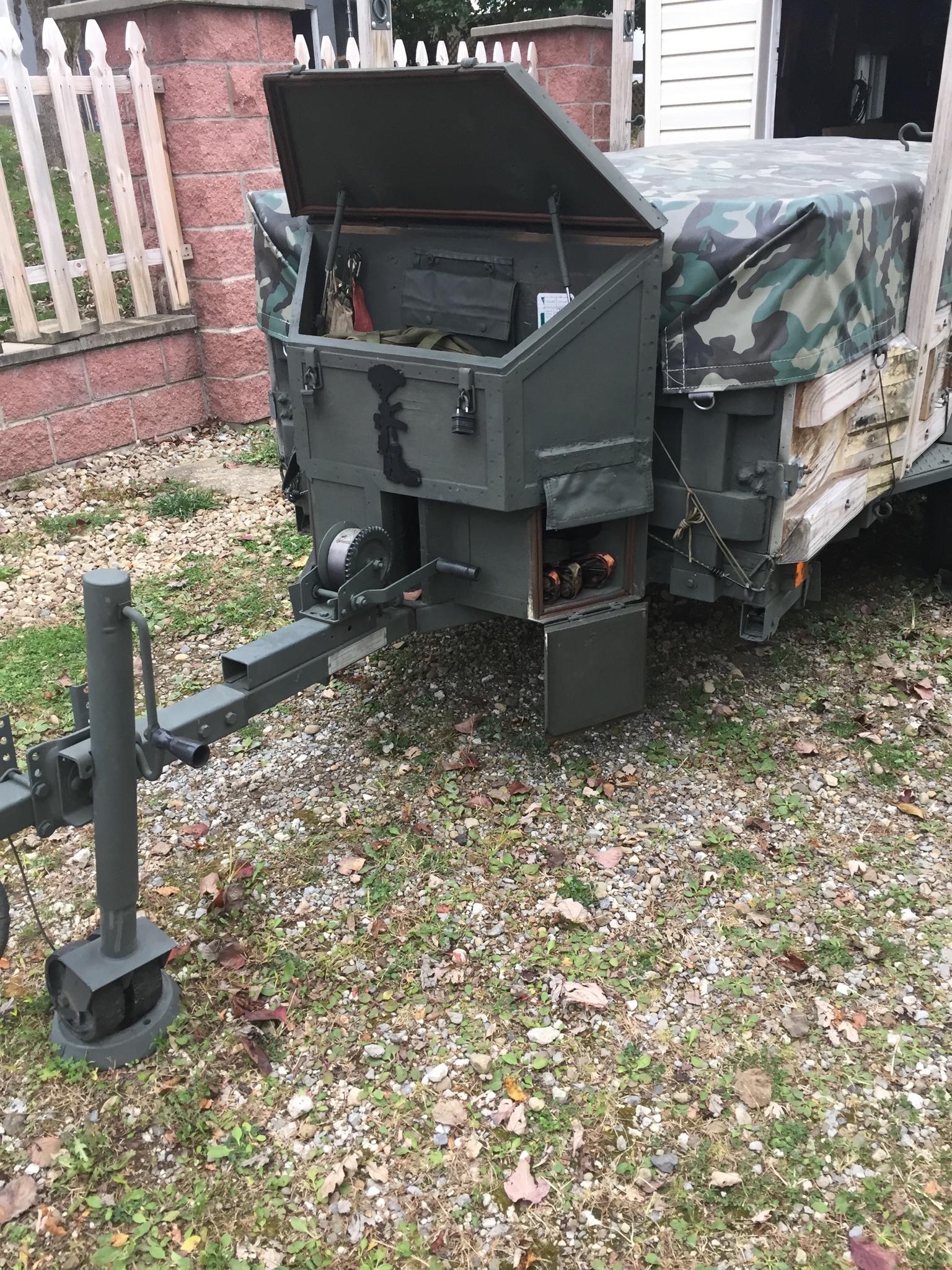 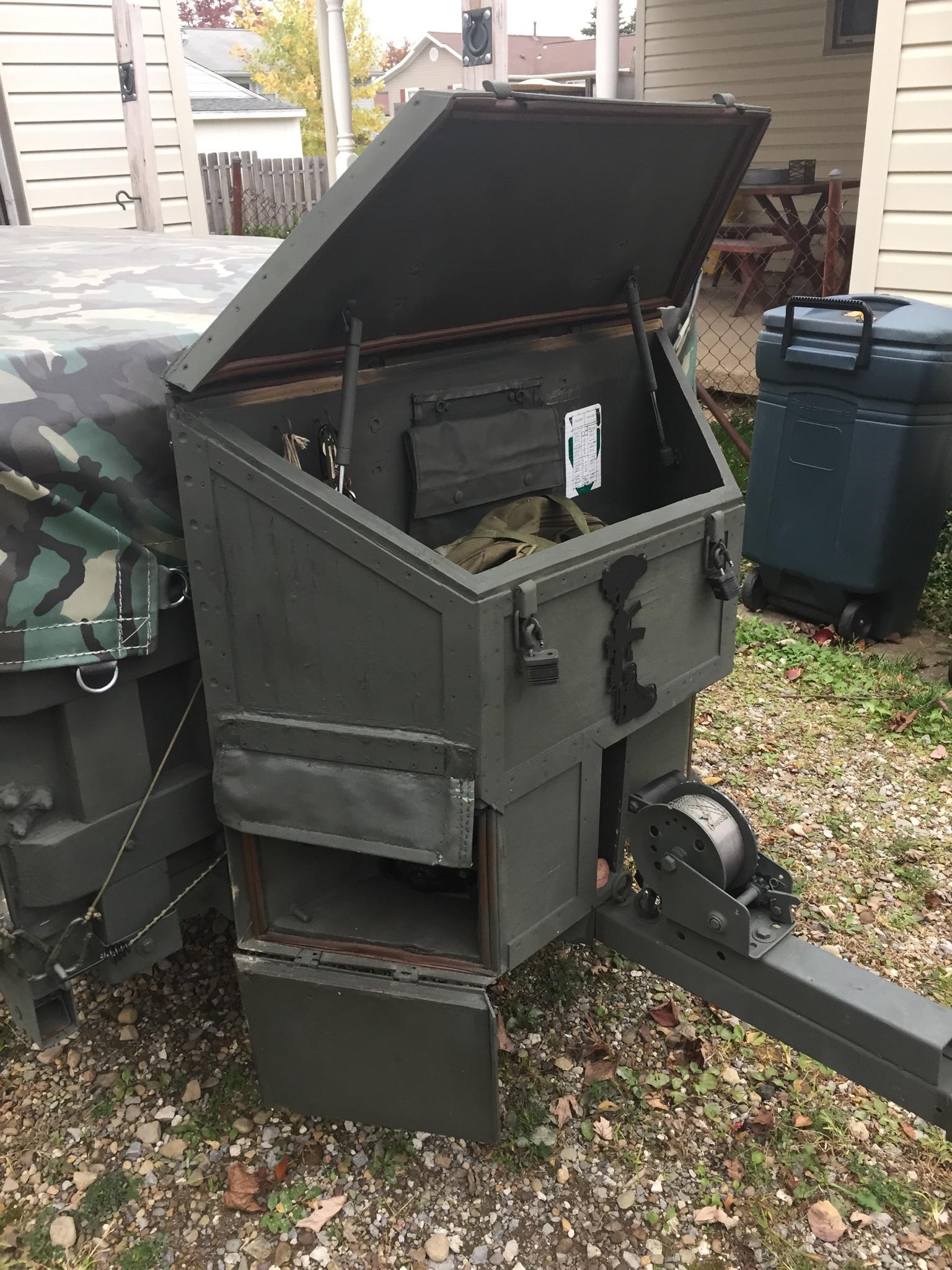 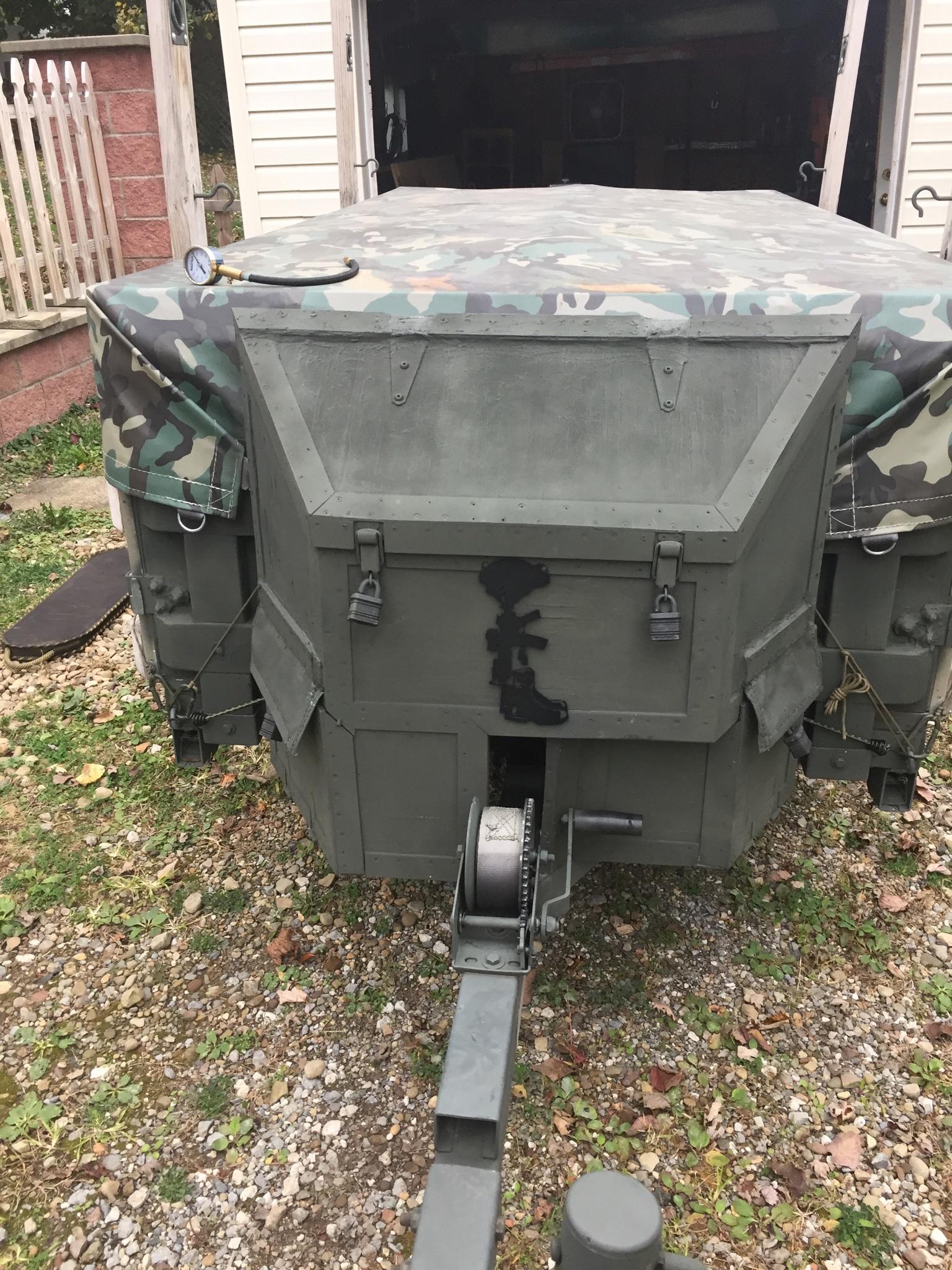 @don4331 the catch with the utility trailer is the pivot is at the root of the tongue bar. You undo the lock pin where the tongue meets the front of the frame and a wing nut from the stud welded to the tongue bar at the tie in plate forward of that. The bed tilts at the axle and the hinge point on the tongue. Since this is drifting away from the OP's thread and subject matter. I thought it best to move this to my thread already started for the trailer. 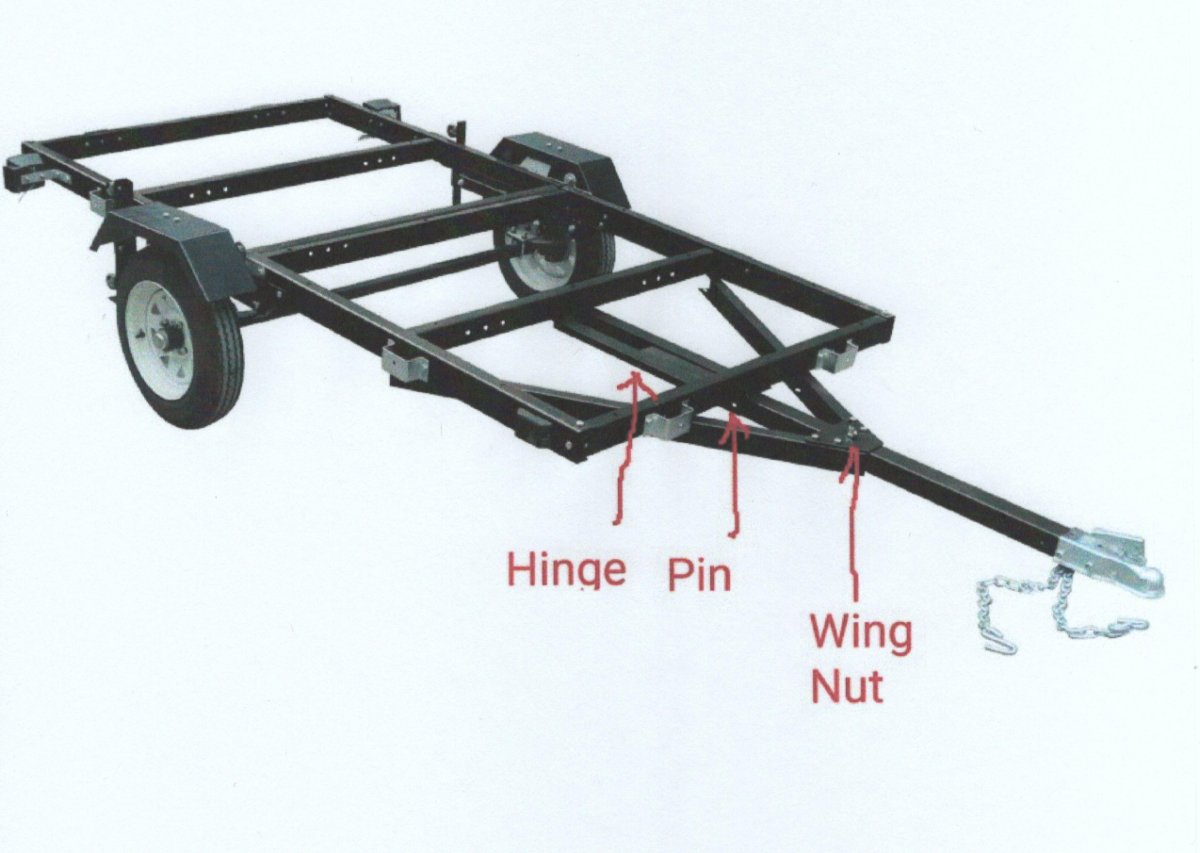 Since the brakes are going to be surge brakes, the issue with the coupler and ball hitch not being off road worthy will be addressed.

The tongue bar is a bit weak as well. There is a twisting issue past where the attachment points are. I’m thinking a solid rectangle tube to replace the reinforced C-channel will do the trick.

I also need to address the tongue heavy problem as it will only get worse with the brake actuator and solid bar being added. An additional spare tire will help but don’t think it will help enough. Moving the axle forward would fix that but would mean a LOT of rework for the fenders and brush guards.

That may mean stepping up work on the battery and work light project I want to do. Mount the battery box aft of the axle somewhere as a counter balance maybe. The battery can’t go under the deck because that is where the middle section of the ramp lives and there is the whole ground clearance issue. And that middle section pretty much takes up all the available room from the axle back. As a plus side, it also acts as a skid plate of sorts. I’ll figure it out.

scotts90ranger said:
I was somewhat confused in the first post when the trailer wasn't red...
Click to expand...

I was somewhat confused on the first two posts when the tow vehicle wasn't a Ranger.

adsm08 said:
I was somewhat confused on the first two posts when the tow vehicle wasn't a Ranger.
Click to expand...

Thus part of the reason it's in Non Ford Ranger Tech. Apart from the fact that the trailer itself isn't a RBV.

I had the more/less same same trailer, just in red and with 4.80-8 wheels. By the time I sold it, there was much original left...

1st, I shortened both the front and back sections by a foot (making it a 4 x 6 trailer) as I found it was too easy to overload stock. (Tread plate deck probably didn't help there, but it really stiffened it up.)
Then I replaced the axle with a 3,500lb 4" drop one to get 5x4.5 pattern, so I could run same rims on trailer and Ranger, which allowed me to eliminate a spare, while keeping the deck height more less same.

I was running 195/70R14s on my '94 SuperCab at the time; if I could have found a lighter axle with drop, I would have probably used that, but they don't seem to make them. And I couldn't buy materials to make my own for the cost of the 3.5k one.​
Lastly, I replaced the tongue bar with a 3 x 3 x 3/16" square one, so I could install the surge brake coupler and added brakes (That was after a 400+' slide on a road coated by freezing rain, with trailer jack knifed against the truck). Brakes might not have done much there, but when I moved from Toronto to Calgary the next October and truck was loaded to GVWR/combination to GCWR, it saved my @$$ at the Hiway 1/Deerfoot intersection (I had missed the speed reduction from 90 to 60 km/h and so was going too fast down the hill when lights changed to red.

As part of the brakes addition, I upgraded the wiring to a 5 pin flat connector - blue wire going to reverse lock out solenoid, so I could back it uphill without having to get out of truck. They also powered a decent light for reversing the trailer at night. The cool part about a flat 5 is a flat 4 will plug into it, so you don't need to worry as much about compatibility when towing someone else's light trailer.​
I've never worried about too much tongue weight, having experienced the alternate. I made weight distributing hitch for the Ranger to work with the trailer - it only uses a single bar on centerline as full size truck models with dual bars are way too stiff.

I'm still thinking on the ideal solution for the lift - give me a couple days...

When I do the axle upgrade, I'm changing to an axless Timbren system rated at 2,000#. The Axles are 3.500# rated by but the spring rate is 2,000#. That system allows for a 2"X2" square tube to tie in the sides and be mounted up near the trailer frame for more ground clearance. Wall thickness is up to the installer. I need to see where the mounting plate hits the frame but I'm thinking 3/16". I don't think they will engage the center beams of the deck enough, if at all, to get away with not using one.

The only brakes available for the existing tire size are 8 1/2" free backing drums. So a backup lockout isn't needed. Of course, the tires will need to be upgraded from load rating B with a 4X4" bolt pattern to load rating C and a 5X4.5" bolt pattern. I think there is a 4X4", 7 1/4" drum that will hold the weight but I don't think the bearings match with what the axle requires and I want the extra stud.

I've considered going to a matching tire size as the Rangers but with the two Rangers having different sized tires and the bolt patterns are different, that makes that plan difficult and would have required a 6" lift. Better for the trails but harder to load and it raises the center of gravity. Plus, I have not plans on taking the trailer on a full on off road drive. I don't think the frame will take it and it's probably too big. So would be more of an anchor than a benefit even if it could handle heavy trail riding.

Concerning the load, I don't plan to exceed the original and registered load rating and I still have room to play. I have noticed that neither Ranger likes the trailer weight not being properly balanced even though the trailer is no where even close to pressing the limits of the rated ball weight they have with the frame mounted hitch. The same weight properly distributed makes a world of difference in how both trucks drive and pull the trailer. The difference is amazing.

For the hydraulic system, thank you for considering what may work. It really is appreciated. I've found a both a single port and dual port manual pump system that might work. I also realize that it might not be workable with how the frame is configured.

The 3"X3"X3 3/16" square tube idea is interesting. That would definitely beef the tongue up. I'll have to give that some thought.

I thought about the Timbren system, but I didn't need the clearance, so strike one, my trailer needed to fit in the 8 x 18 garage along with the wife's Mustang, lawn mover, etc. and it didn't seem as conducive to folding the trailer was strike 2 and cost was strike 3.

For my trips cross country, especially the winter one, about a dozen friends would load the trailer with Xmas presents to deliver back home in parking lot before I pulled out after work*, and I occasionally had to redistribute weight to avoid issue.

The Rube Goldberg solution that keeps coming to mind is something along lines of this: 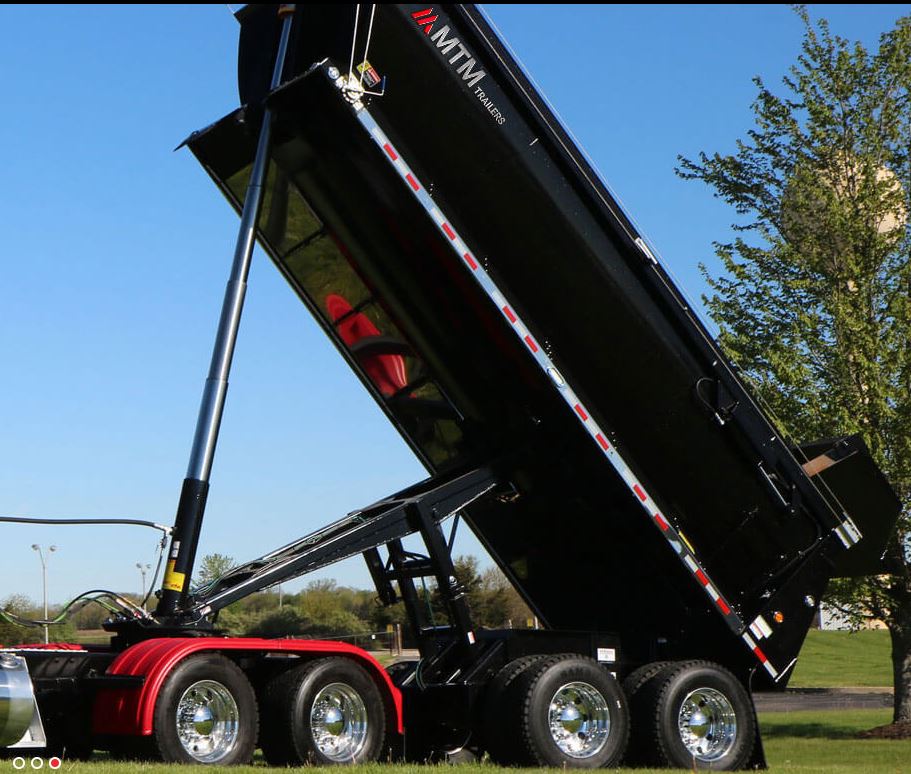 Using your single pole tongue versus the "A" frame of this solution. and lifting the whole trailer frame. I am assuming you aren't lifting as high. I can really better mouse trap it, using a screw lift system from the stock Ranger tire jack.

Scissors lift on the other post are nice in the major forces of the hydraulic cylinder are contained within the lift and the box only "sees" the lift forces (and most often the "lift" is forward on the bed, reducing the forces further still.

*I was the stupid one who drove, the rest flew...

A jack screw is possibly an option. It’s more of a “like to do” than a “have to do”. I rarely ever use the tilt feature. Partly because it is not user friendly. I’ll have to take some measurements this spring or summer to get a better idea what kind of numbers I’m dealing with as far as angle and tilt height.

Getting ready to sand, clean, prime, bed line, and paint the next side panel so everything is cured in time for camping. These side panels are also getting inset carry handles on the inside and handles on the outside in order to make them easier to handle and carry. The things are somewhere in the neighborhood of 90# and get heavy real fast. 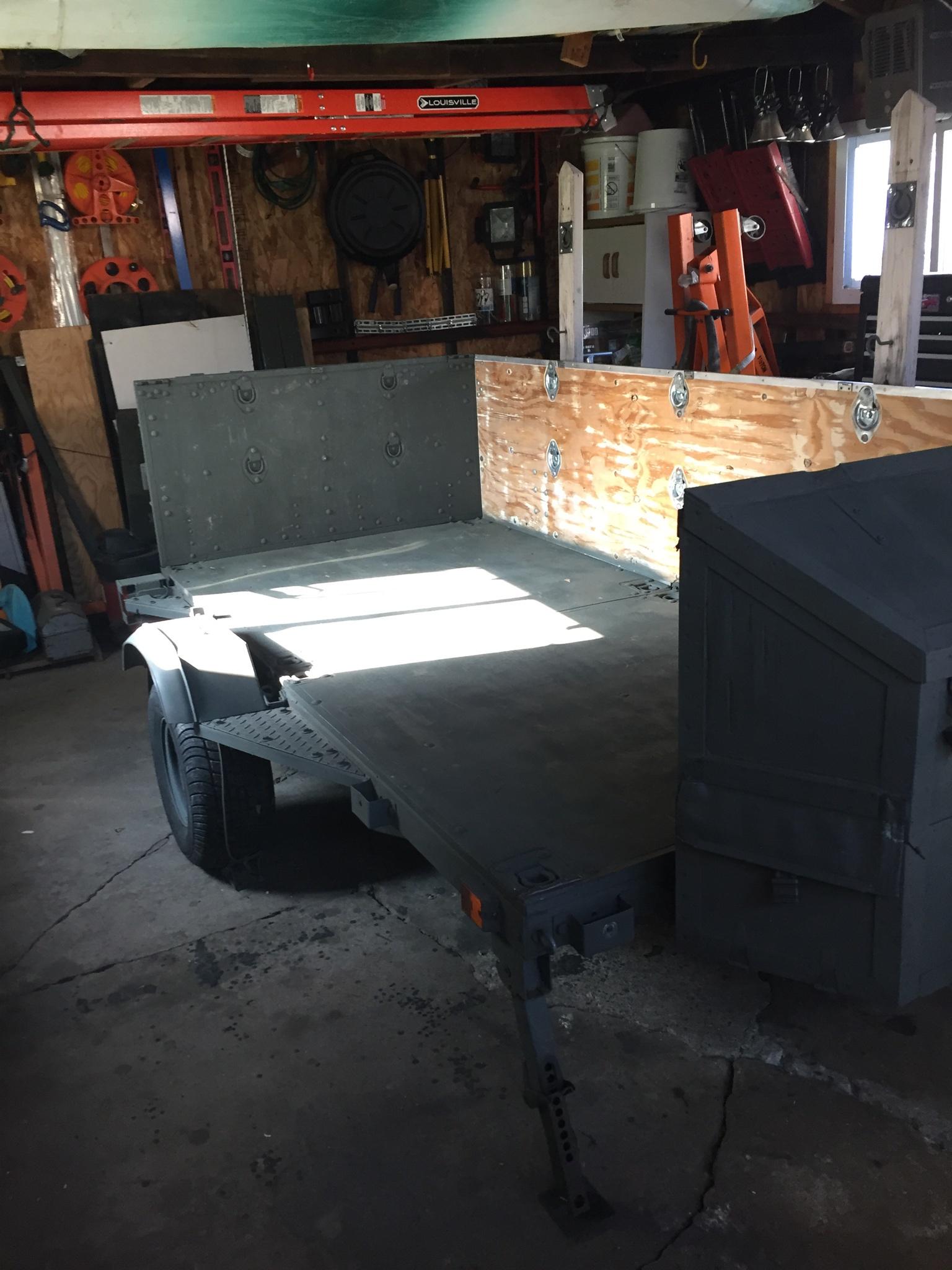 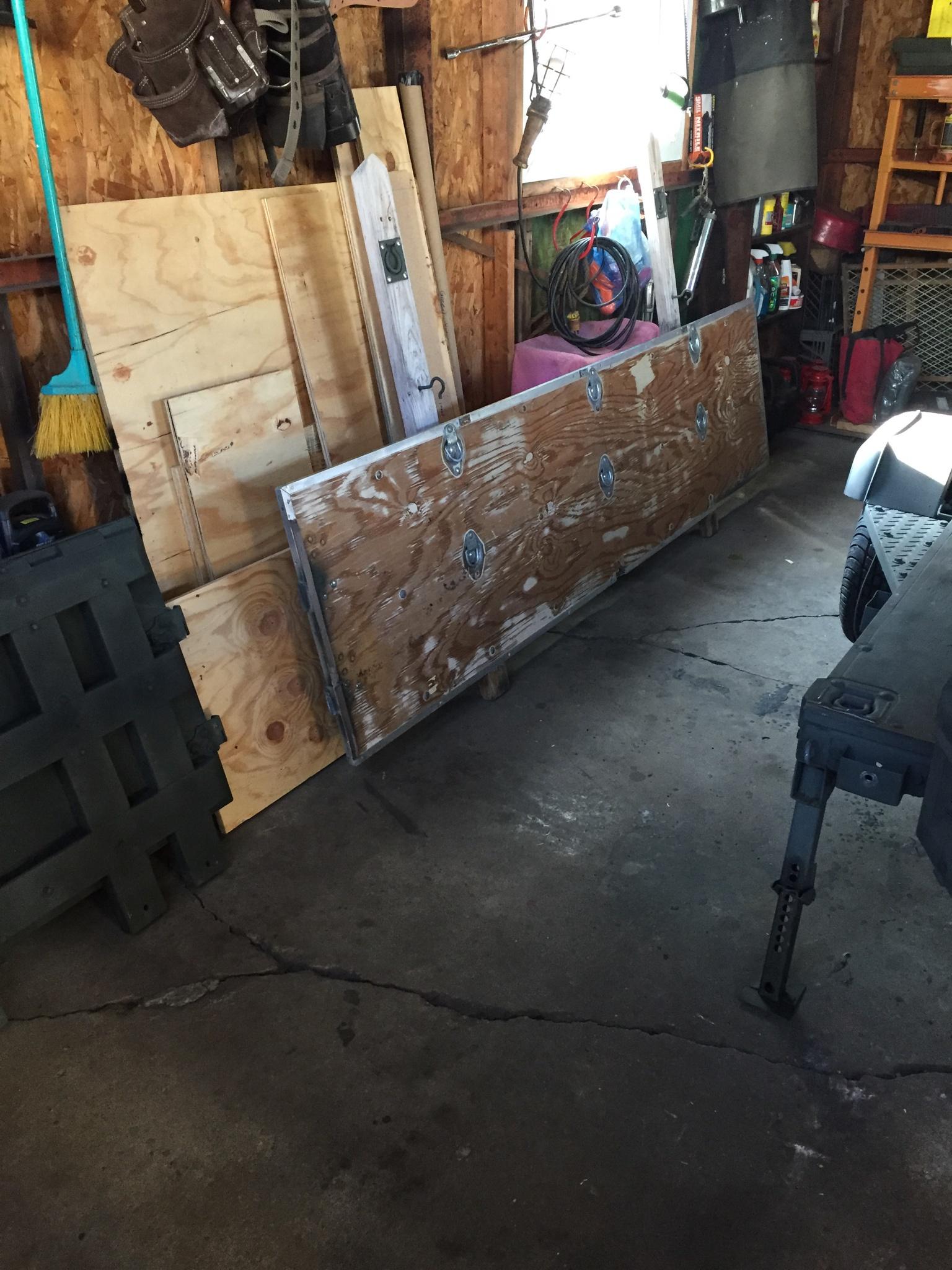