As you likely already know, the Ecoboost 2.3 is based on the older Duratec/MZR family of 4 cylinders. You could get a Duratec 2.3L in Rangers from 2001-2011. I'd bet a six pack that a hydraulic power steering pump from a Duratec Ranger might bolt onto the Ecoboost head, just as it did on a Duratec. Not sure what (if any) other packaging obstacles that might create, but it seems like it might be worth a test fit. Anything that can be used from a Duratec truck should make chassis fitment/integration easier. 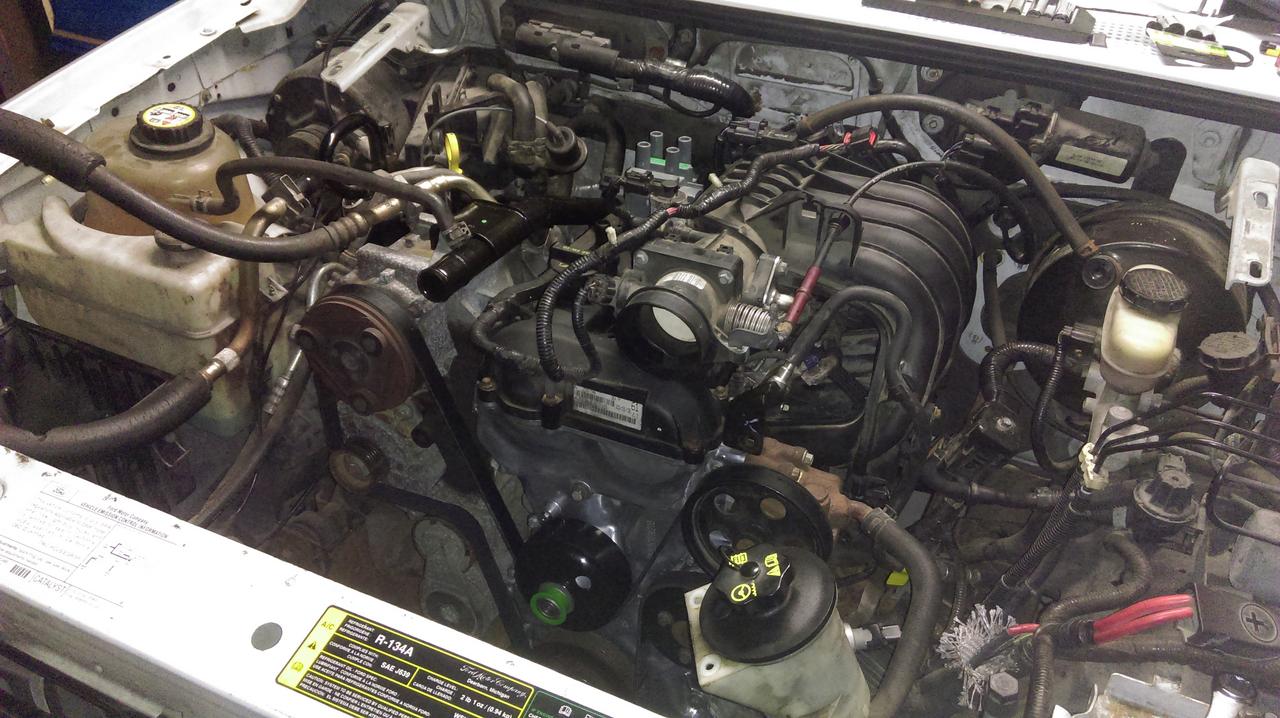 I found myself in the local pick and pull last week for the first time looking for an axle. I didn't find any of these 2.3s to get my hands on test fit parts. It's not looking like the power steering or AC location is viable for the Ecoboost. The belt tensioner being in the upper driver side area and turbo ducting/cooler lines in the upper passenger side area make it pretty impossible I think. I'm just going to have to go with an electric assist such as the Volvo conversion and roll with the punches.

Progress has been slow but steady since I'm not a fabricator. The engine went into its home today. I still need to make a transmission mount and relocate one of the brackets about 1/16" so the bolts fit better. I was going to make a diagram for dimensions of my mounts, but I'm on revision 4 or 5 after a lot of tweaking so they look like franken-brackets that need redone into a final form before I'm comfortable sharing. I don't know what people generally use for brackets, but I made mine purely out of 3"x48" 1/8" steel that I found at Rural King. I have no idea if that will be strong enough but it feels pretty stout. To save myself a lot of headache, I used factory bolt locations through my plates. The actual engine mount holes moved forward considerably and I have some concern about strength, but it should be a good enough start. 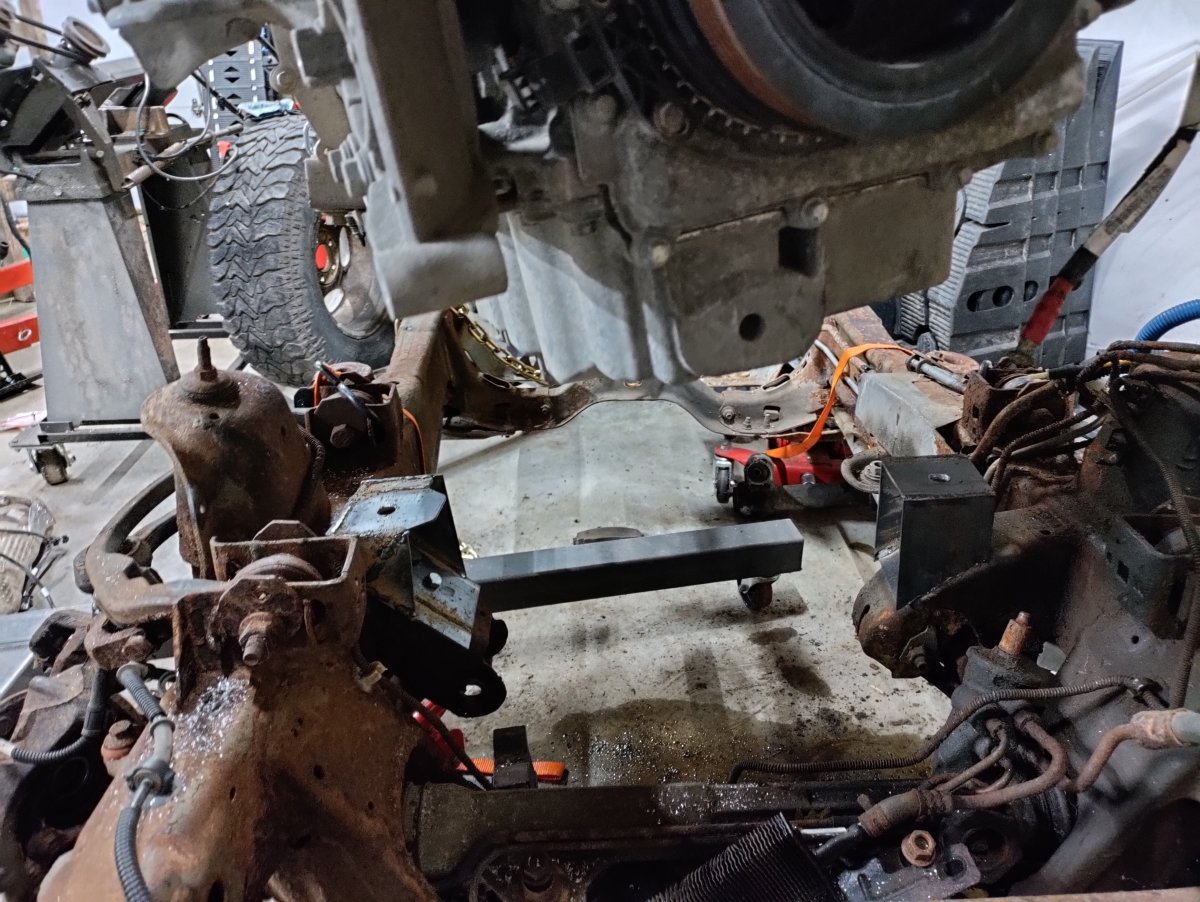 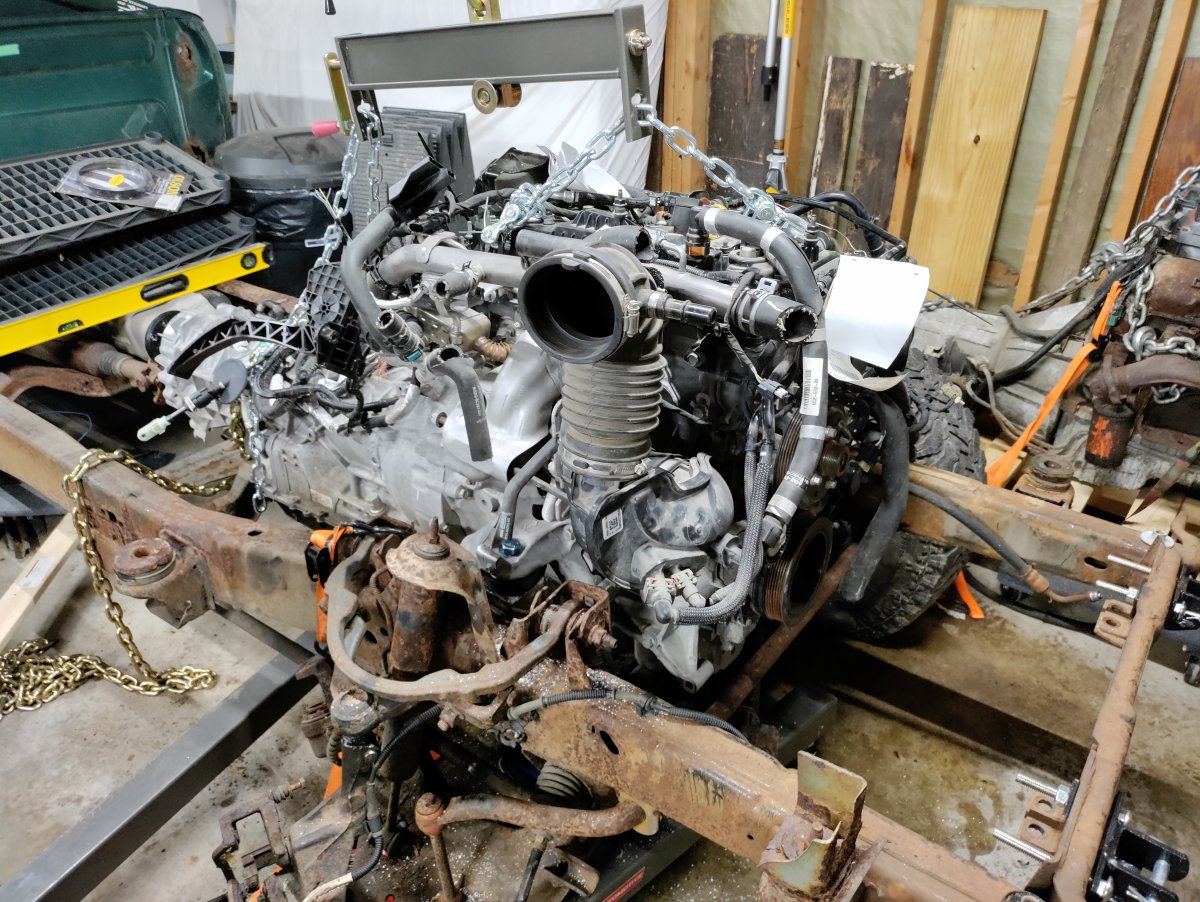 I suppose I should mention that I ended up raising the engine slightly so more of the oil pan cleared the steering rack and I could move the whole unit forward a bit. I saw that I would have firewall/tunnel issues otherwise. After a lot of reading, I found out it is a nightmare to mess with front end geometry when you don't know what you're doing. For that reason my engine brackets currently have the engine sitting with the oil pan no more than 1/16" above the rack in it's stock location to get it as low as possible without making contact. My hope is that I have a little wiggle room with tunnel and hood clearance where it's at now and I can shim it higher to gain clearance later. Maybe it's nothing, but I doubt good things will come of a hot oil pan nearly (or maybe literally) tickling the steering rack constantly.

Next step is the transmission bracket and using the laser to see if this thing has moved and is going to have clearance issues again. The smart move would be to toss the cab back on for a test fit, but without a lift I'm probably in for 12-16 hours of sketchy fiddle work.

I ripped the bandaid off and bought a pricey 4.10 limited slip Explorer axle over the weekend because I can't stand drum brakes and I wanted some extra meat for the rear end anyway. Assuming the engine is OK where it is, in theory the rest is coming down to details. I will need to install a lift kit for the front diff to fit, but that pretty much guarantees I can't get the cab back on because I was barely able to lift it high enough the first time.

Other than the mechanics of getting hoses and components repaired and routed, frame and body repair will probably be the most boring and time consuming part of the build. I'm still on the fence whether I want to have the frame completely blasted and coated or if I want to only fix the rust and settle for whatever "my best attempt" looks like in the garage. If nowhere in town can do it I'm looking at an hour of travel to take it somewhere to have it done.

Transmission mount is made. I had to cut down about 2 inches off of the crossmember to clear measurements for the tunnel. I wasn't very interested in doing a boatload of cutting and framework to move the entire crossmember so I opted to just make a little extension piece. It looks silly and it's probably not the most sound but we'll see what happens. According to my measurements the drivetrain should be completely set now. I think I want to go ahead and try a cab test fit but it will be a little bit before I can schedule that. In the meantime I'm now ready to start fixing the hoses and broken pieces on the engine itself and get it ready for primetime. 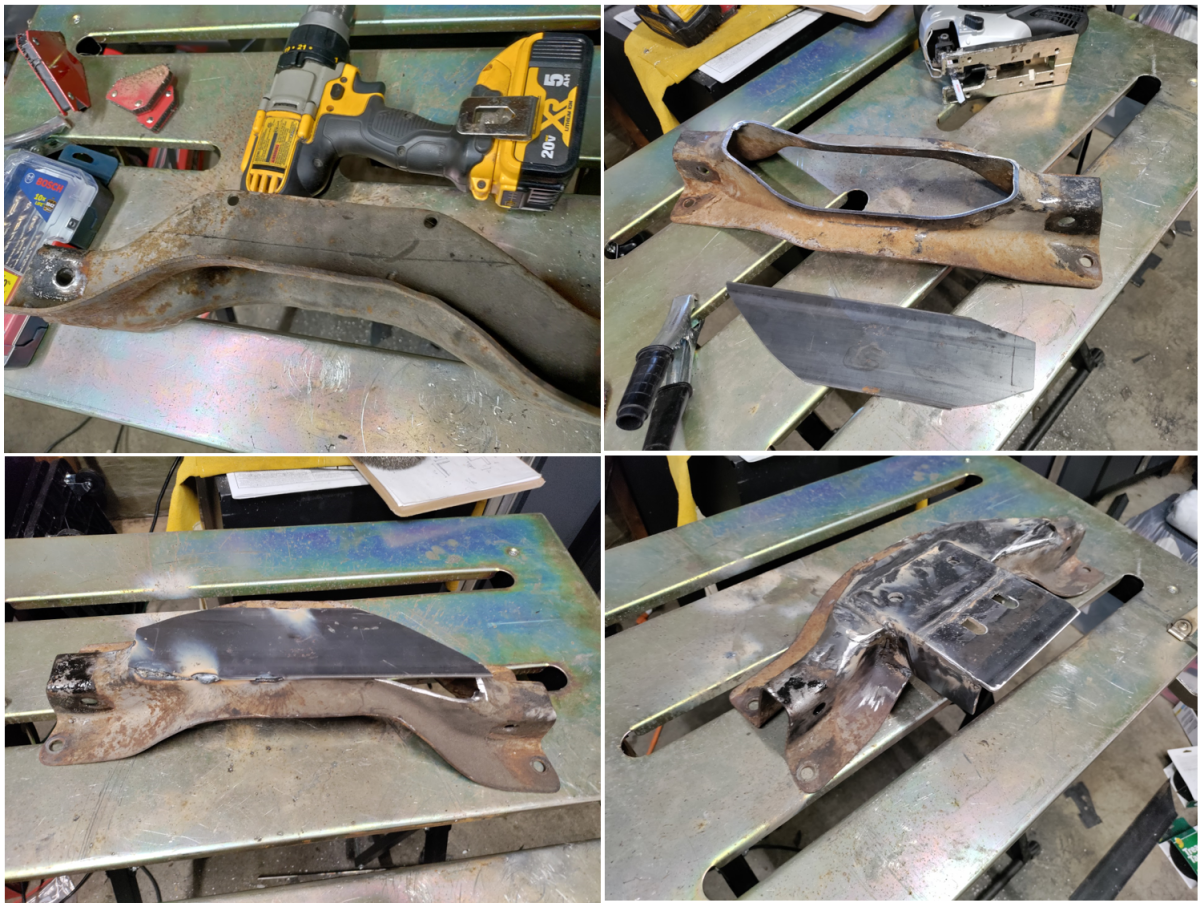 Boost Bucket said:
Transmission mount is made. I had to cut down about 2 inches off of the crossmember to clear measurements for the tunnel. I wasn't very interested in doing a boatload of cutting and framework to move the entire crossmember so I opted to just make a little extension piece. It looks silly and it's probably not the most sound but we'll see what happens. According to my measurements the drivetrain should be completely set now. I think I want to go ahead and try a cab test fit but it will be a little bit before I can schedule that. In the meantime I'm now ready to start fixing the hoses and broken pieces on the engine itself and get it ready for primetime.
View attachment 85186
Click to expand...

I think that will work just fine.

Due to some nasty frame rust issues, I've been searching for a replacement frame without much luck. I finally decided to settle on a half frame when I found a really nice one at the local parts yard recently. Since I plan to tow with this build I don't want to risk a poor frame repair would prefer to just replace the whole rear half. The last few inches are almost completely gone. 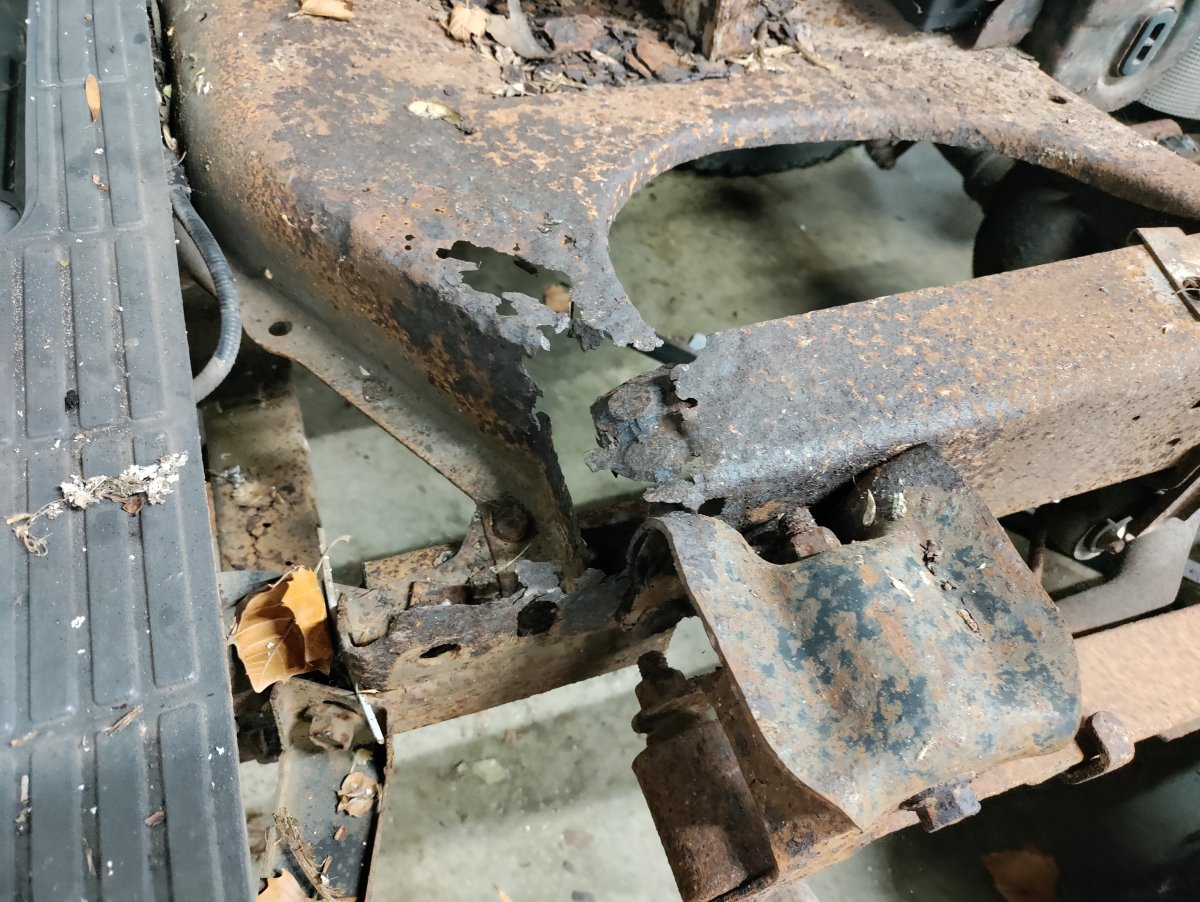 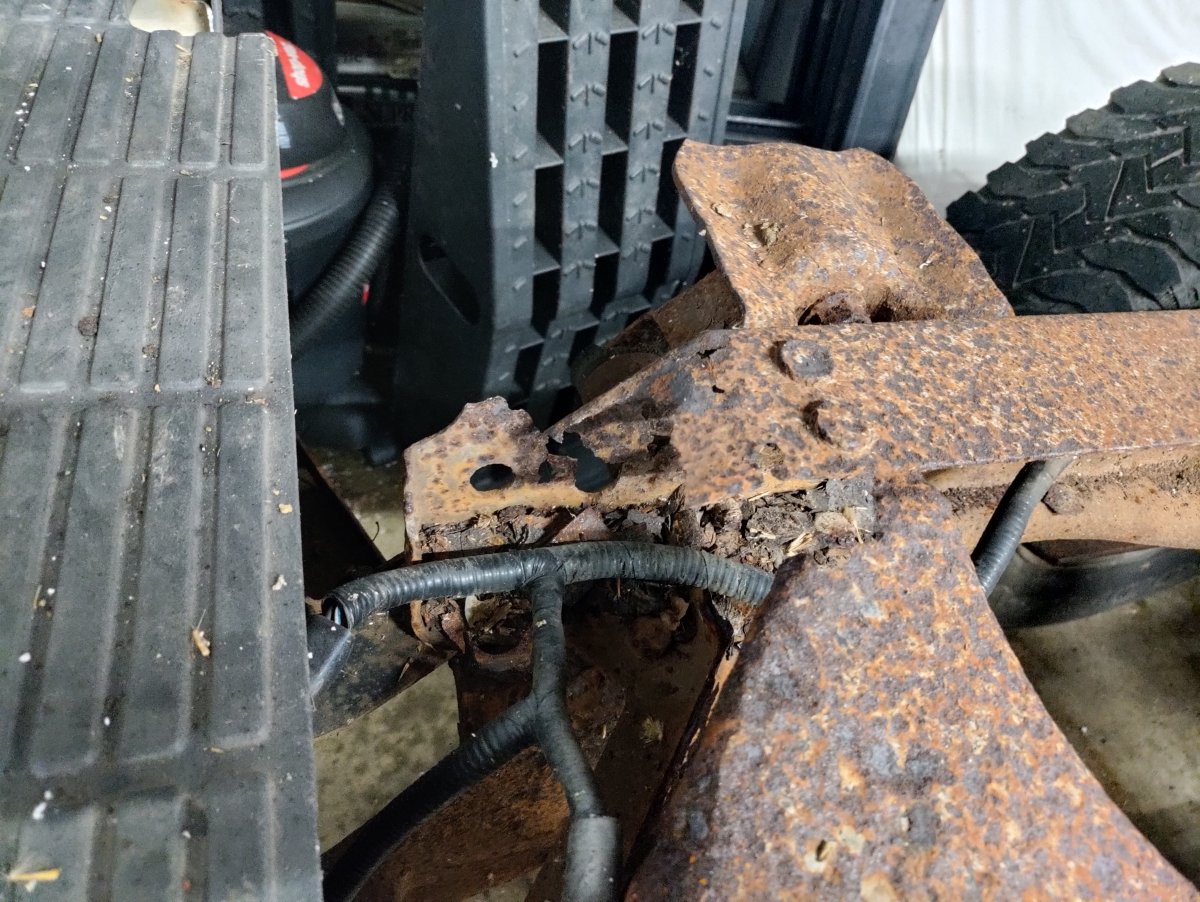 It may not look like much from the picture but the frame I found is in nearly perfect condition. I just hope it ends up being a match. 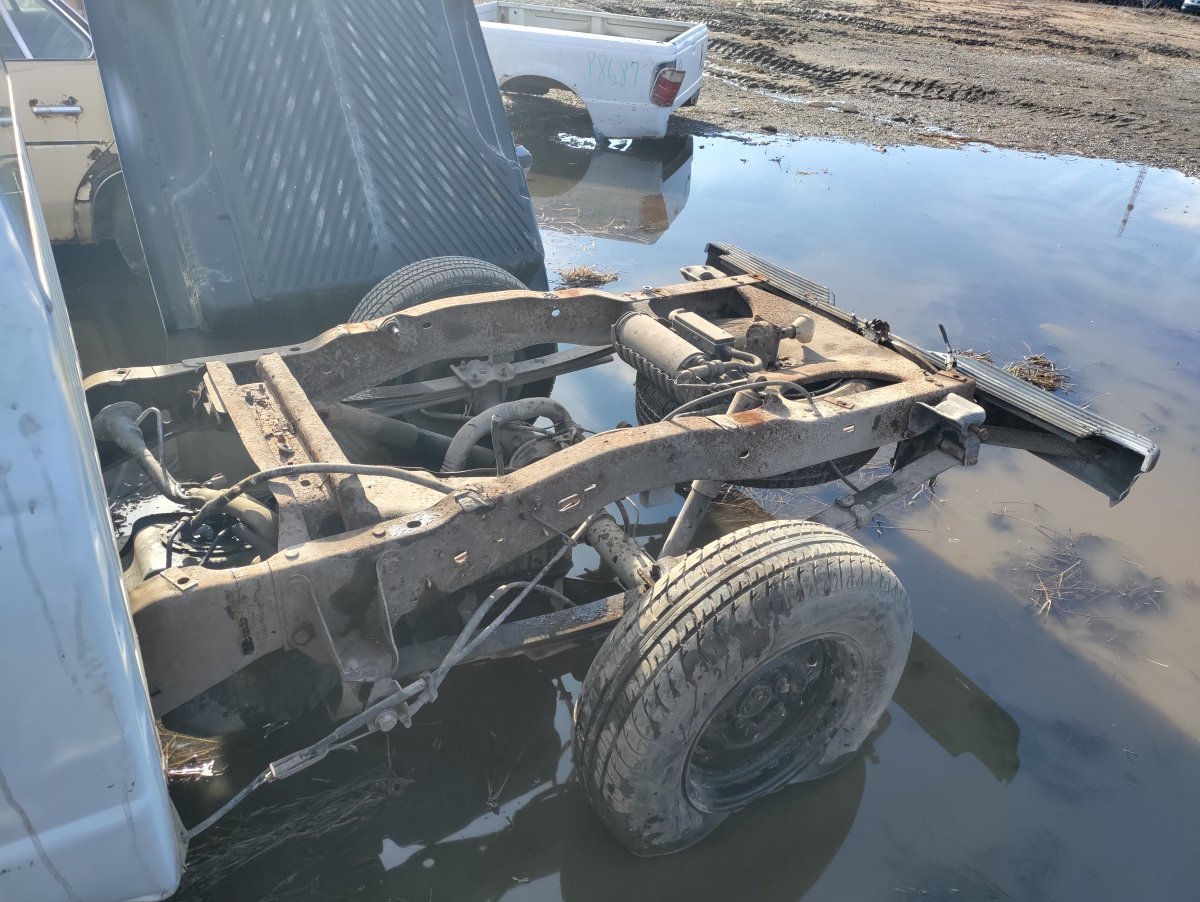 Next up is stripping my 2000 frame, replacing the rear half, then shipping it all off to be blasted and coated. It will be nice to have it finally going back together.

Working around the weather, I was able to squeeze in another work day. I found that the new frame section was too heavy for me to move around on my own with the rear bumper and hitch attached so those had to go. I wish I had a scale to tell exactly, but the rear frame section is lighter than I thought and I might guesstimate it between 80-100lb with the hitch and bumper off. For anyone curious like I was, with the bumper at hitch attached the best I could do was drag it where I wanted it but with them off it's not a huge deal to deadlift the whole assembly. 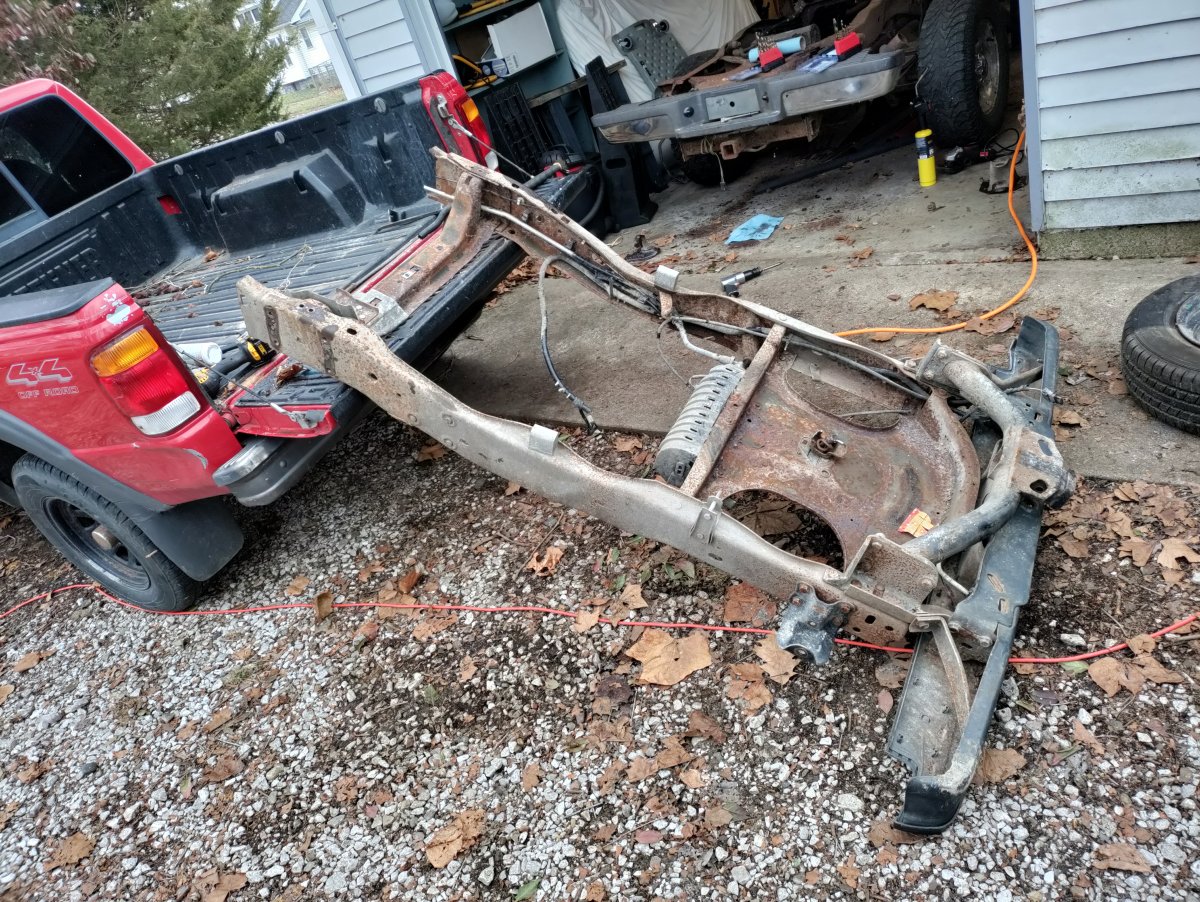 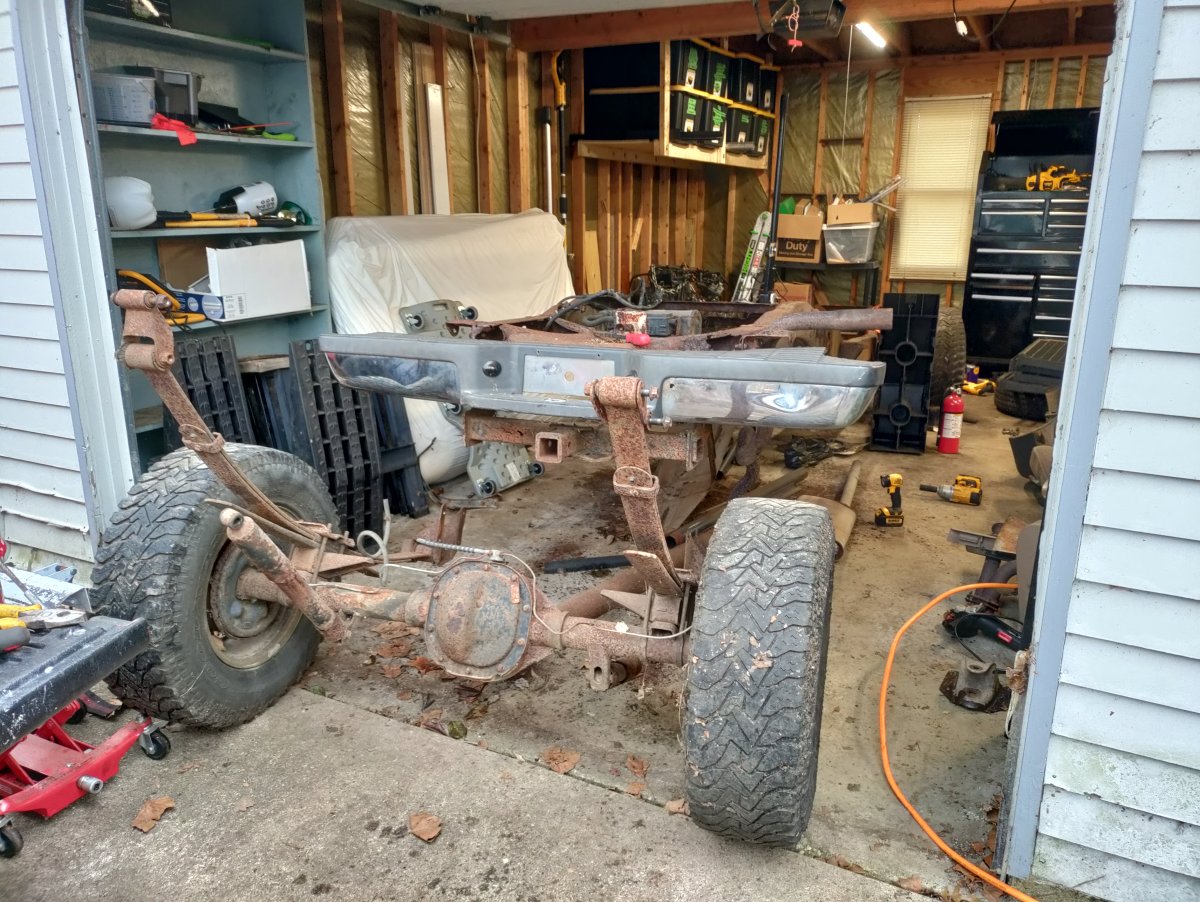 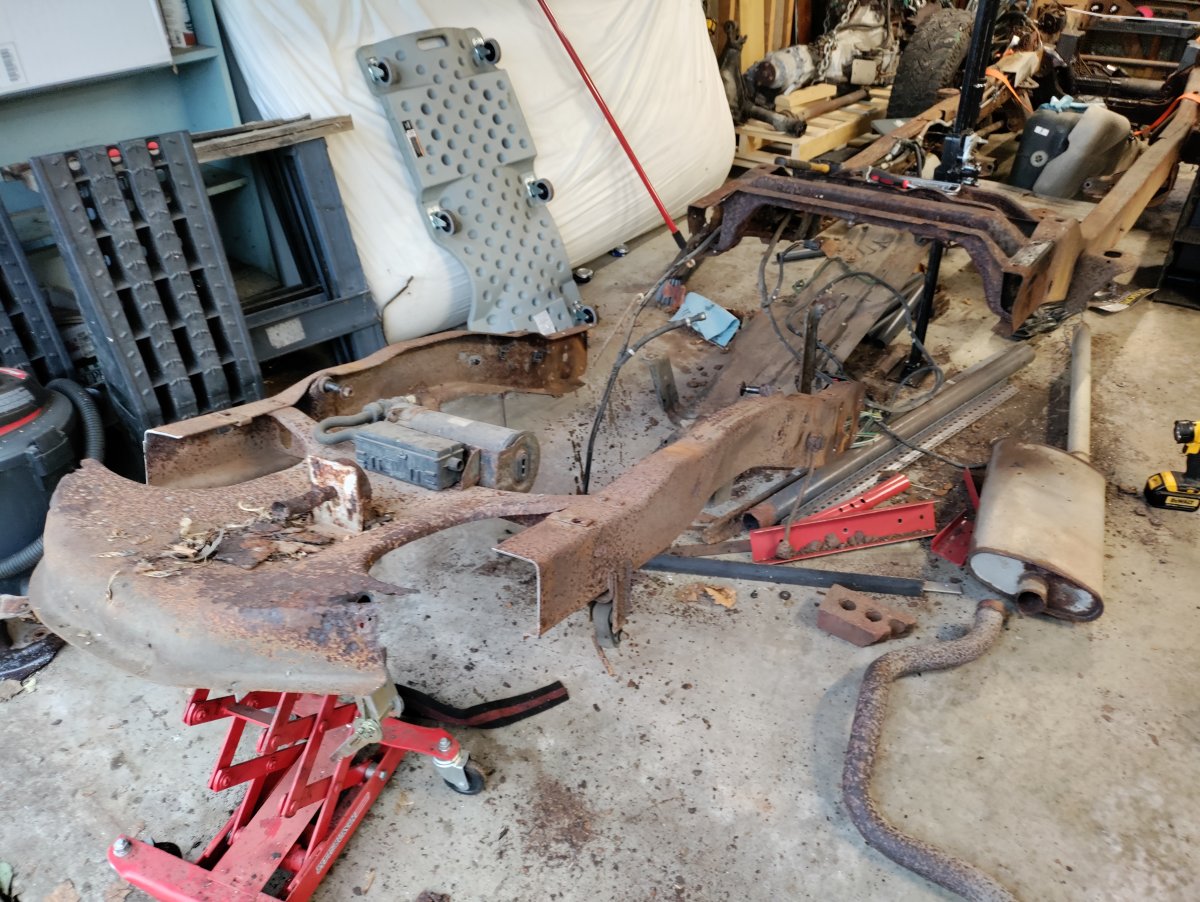 I also made a deal this week on the marketplace for some "jeep" wheels and tires. I've been looking high and low for chrome bullet holes but all the ones I found were generally 6 lug, 15", AND as pricey as buying new. I would've preferred to wait until the very end to think about wheels and tires but the clearance issues requiring the lift kit means I had to find some 16" wheels to fit the lift according to the documentation. I must admit I did not know how absurdly large 35s are. These are 5x5 pattern so I'm going to run 1.5" Rough Country adapters to get back to 5x4.5 and hope the spacing works. 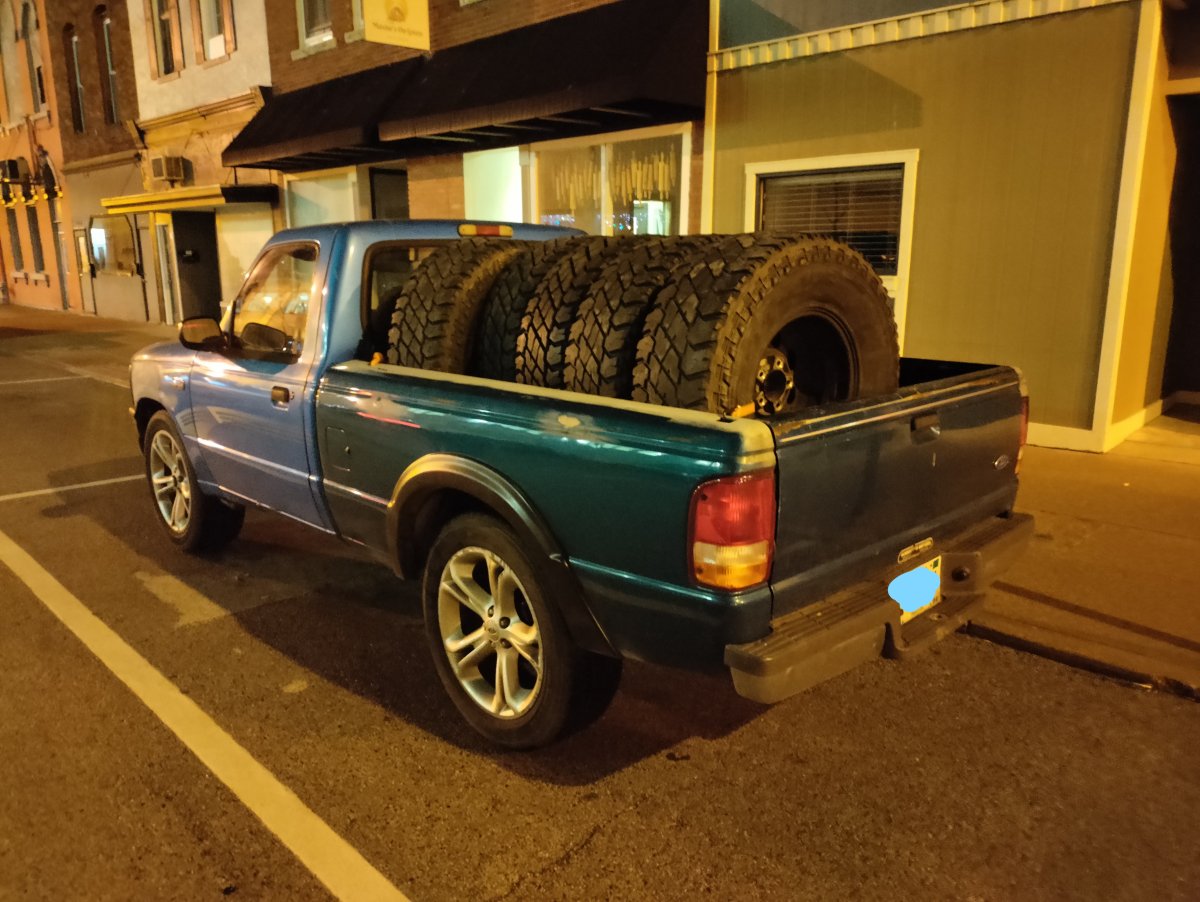 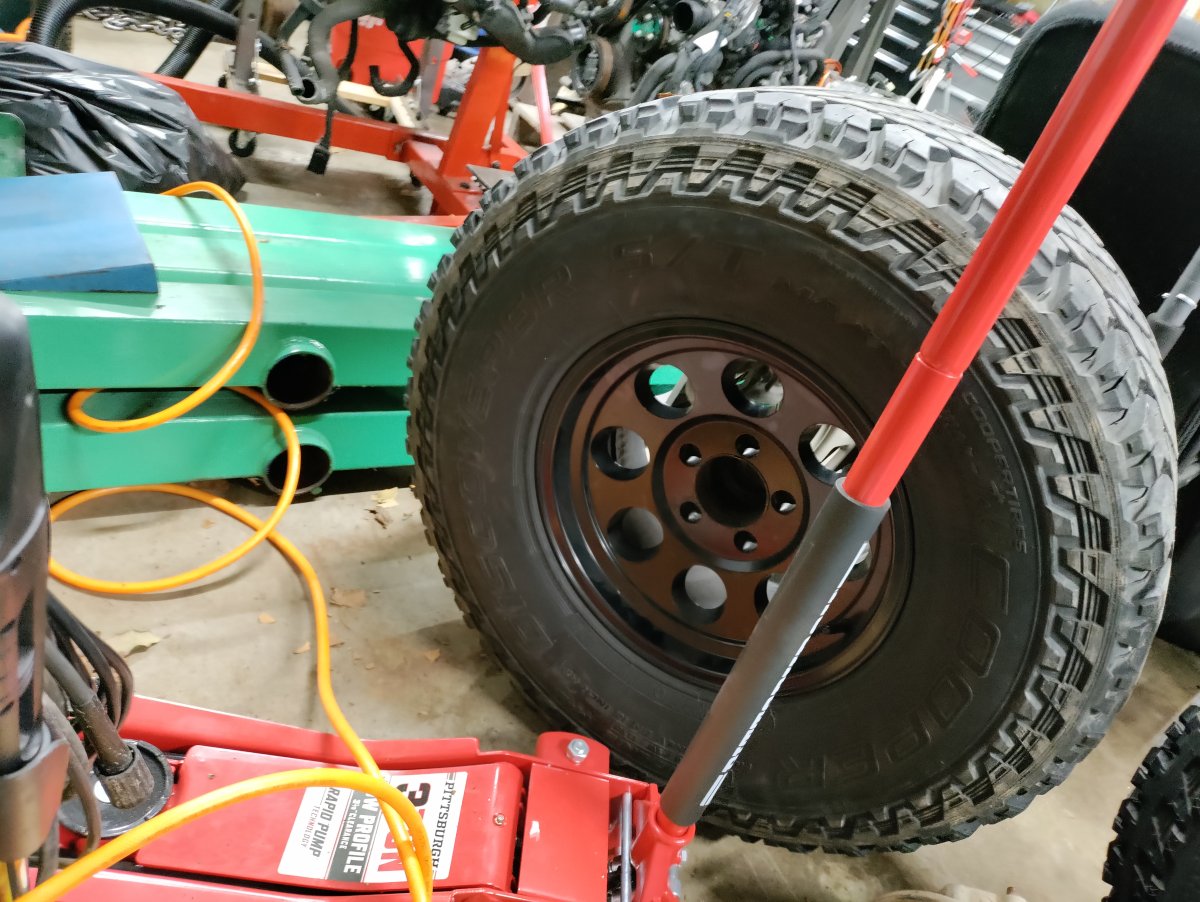