ericbphoto said:
How is that CB antenna mount working out? It looks great. Any water leaks?

I mounted mine on the rear corner of the cab behind the driver. But I'm having ground plane issues (I assume) making the SWR read high as if the antenna system is too short. Couldn't use the full length 1/4 wave whip. I got an older style 5' Firestik (the kind that you have to trim the wire to tune it.) and that plus a spring bring the SWR almost to perfection since the antenna is manufatured "long"so it can be tuned. Just wondering if I should move the antenna to the roof or leave it as it is. I'm new to radio technology. So a lot of reading and learning is going on here. Radio is the Uniden Bearcat 980SSB.
Click to expand...

No leaks so far. I ran a small bead of black silicone around the top and sides before I tightened it down. I did end up bending the tab the antenna mounts to up to clear my topper.

DISCLAIMER: I am by no means an expert in CB’s, but I have fiddled with them enough to make mine work fairly well.

My biggest suggestion is to make sure you have a good ground plane before you monkey with moving your antenna. Make sure your doors and hood have a sufficient ground to the cab and make sure you have good grounds from the bed and cab to the frame. Some people have gone as far as adding a ground strap from the exhaust to the frame. If any of your factory ground straps are broken or heavily corroded, replace them. This is generally the most common antenna tuning issue. If your ground plane sucks, your SWR will too. Location of your antenna can play into it to an extent but if your antenna is mounted up on the corner of the cab, it should be decent. The problem comes in when a good portion of the antenna is bellow the roof line and close to the cab. Now, having your antenna off to one side WILL affect how well you transmit and receive 360° around the truck. I believe you will transmit farther out to the left rear of your truck with your setup. That’s the secondary reason I moved mine to the center of the cab. CB antennas transmit in kind of a cone shape. Anything obstructing that cone won’t completely block the signal but will kind of deflect it making it weak in that direction. If that makes any sense lol.

Thank you. I'll verify cab grounding. I know the antenna bracket is well grounded to the cab.

ericbphoto said:
Thank you. I'll verify cab grounding. I know the antenna bracket is well grounded to the cab.

I hope you have some success. I’m pretty sure you are going to hear some electrical noise almost no matter what you do. Just the nature of older Ford trucks I guess.

Not much of an update for the truck but a small one none the less. Made a run to the UP with my oldest daughter to pick up a new toy (more on that later) and on the way home the truck developed an unreasonably high, high idle. About 2,000 rpm. After scratching my head and Google’s, I figured the best place to start was the simplest. Finally making sure the truck was running all of the correct sensors. When I first built it, I had decided to run the air box and intake tube off of the ‘97 B4000 not realizing the MAF sensors were different diameters. The truck always started kind of funny and ran really rich. Being that my explorer runs the newer, larger MAF , I decided to put the B4000 intake parts on it and use its intake tube to get the correct 1993 MAF on my truck. VOILA!
I finally got it running 100% and no more check engine lights. Fuel mileage is up in the low 20’s thanks to the correct MAF. 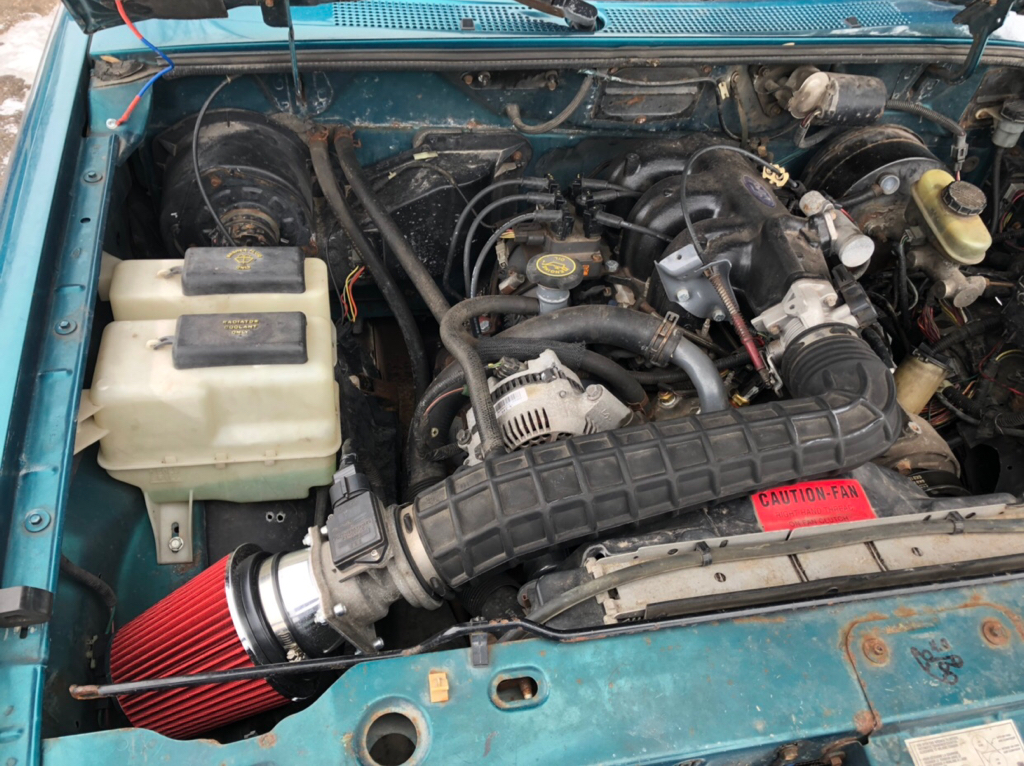 Don’t hate on the filter, it’s gone as soon as it warms up enough to make an adapter plate to bolt the MAF to a late 90’s OHV Explorer air box.

B4000 air “box” and intake tube on my Explorer. I need to order a six pin weatherpak connector for the MAF wiring harness yet. 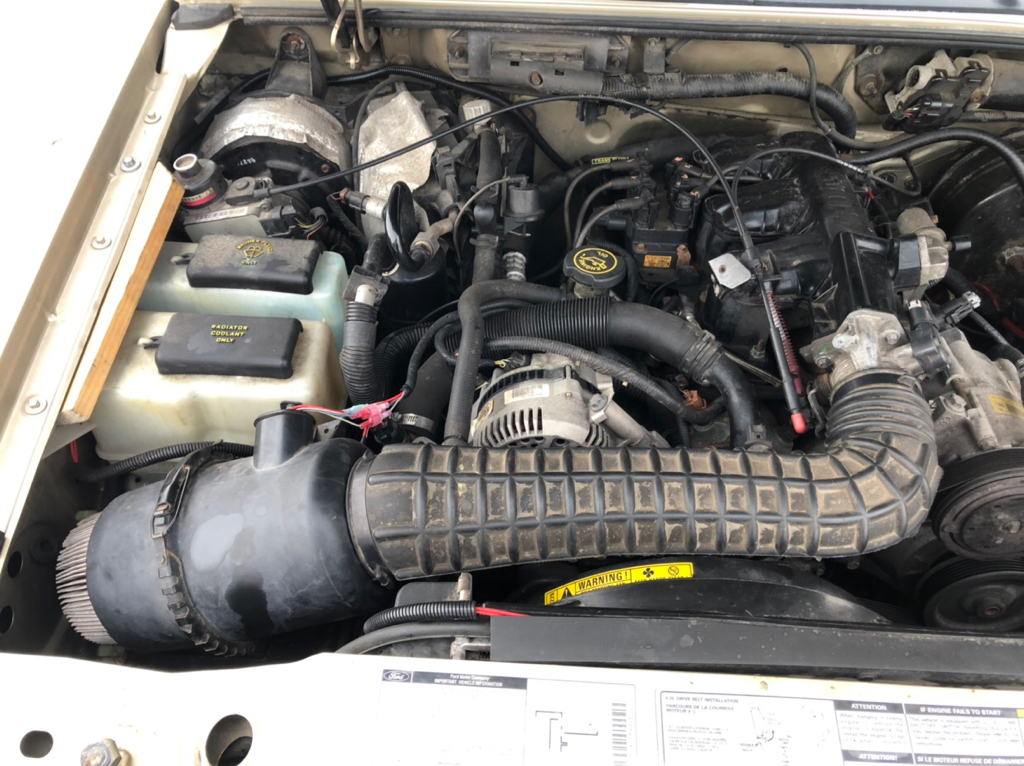 I also picked up a spare Warn lockout from the junkyard. 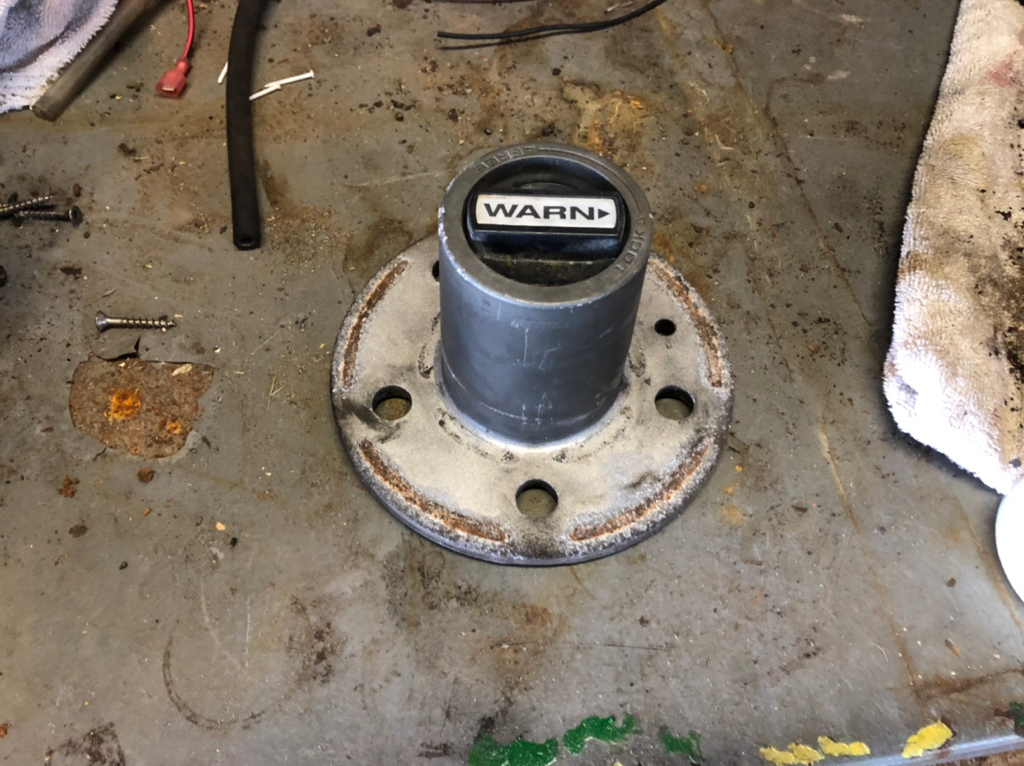 And countersunk it for the retaining bolts 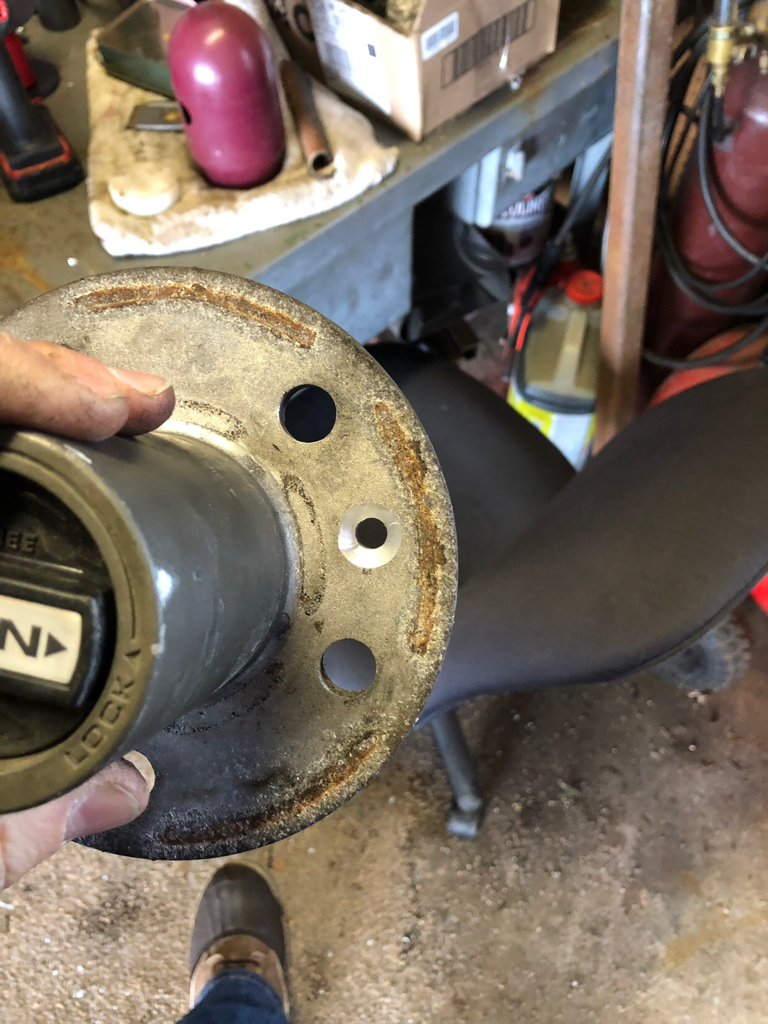 I also finally found the little cig cubby that goes under the headlight switch in the gen 2 trucks. My minty wood grain dash bezel is finally complete. 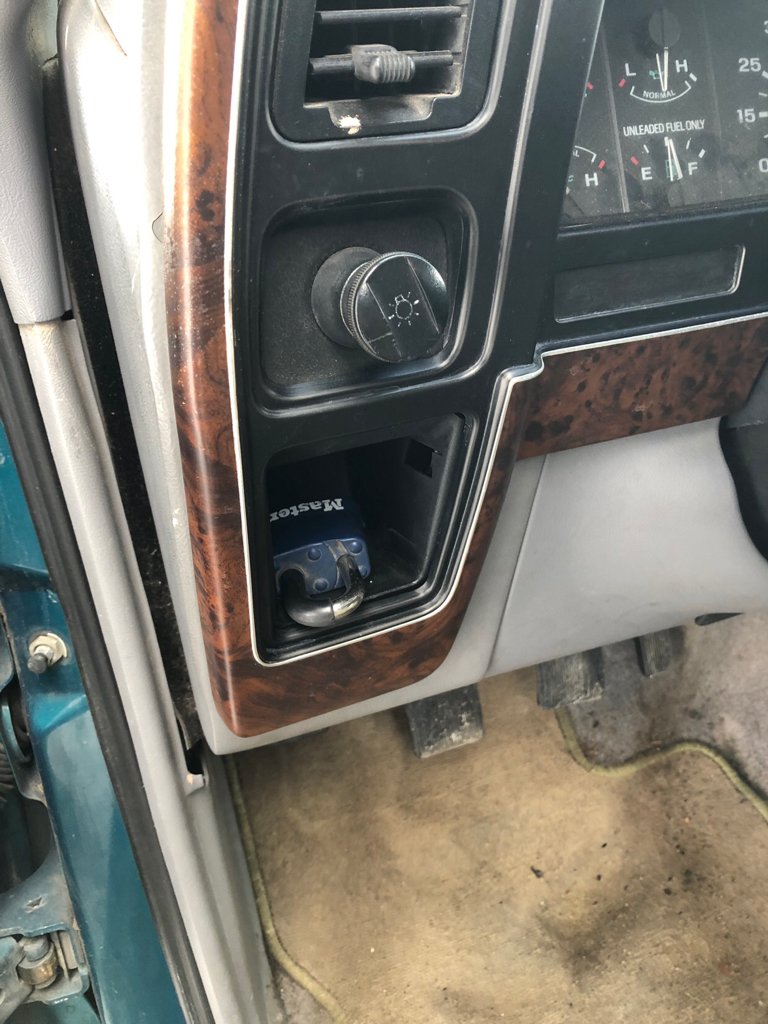 Air horn button is tucked away nicely in the top of the cubby. 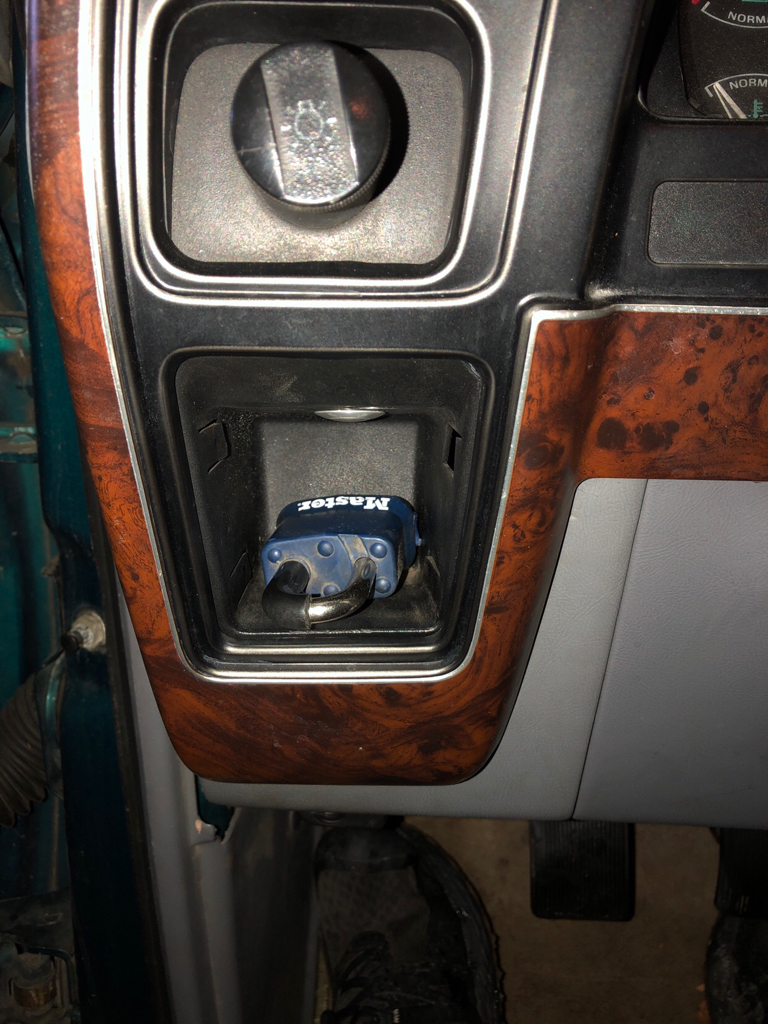 That’s all for now. It’s been fairly cold here which kills motivation so not much is happening. The Ranger has been the most reliable starter in my stable this winter. Even down to -24°F where my Explorer would not start. 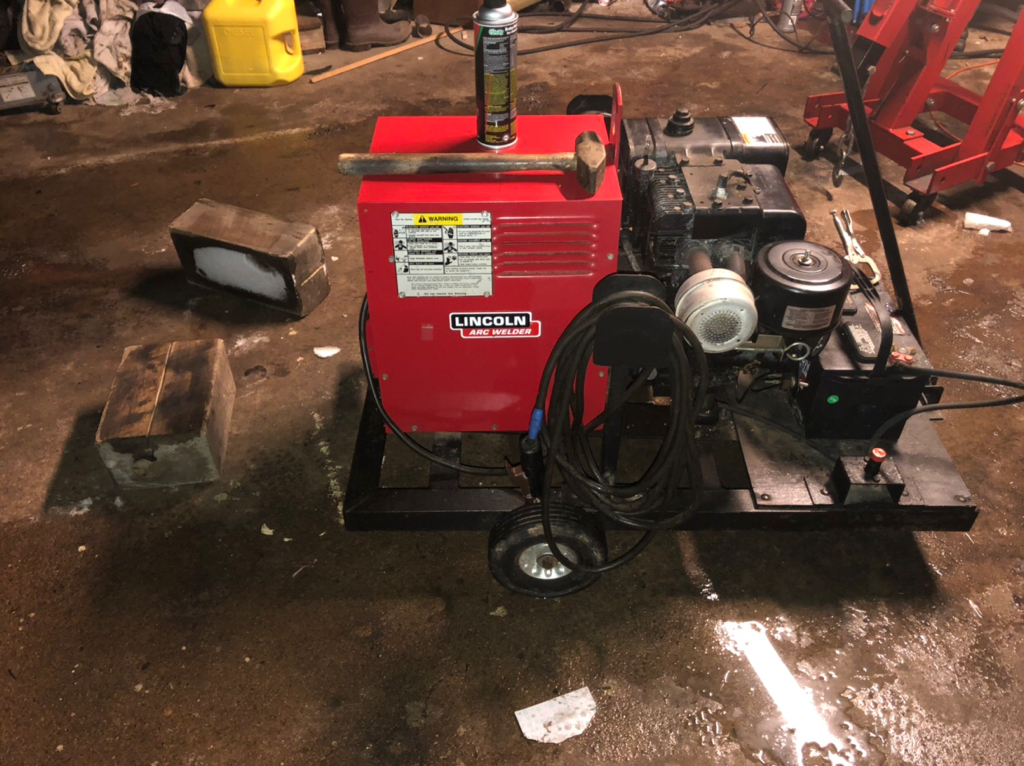 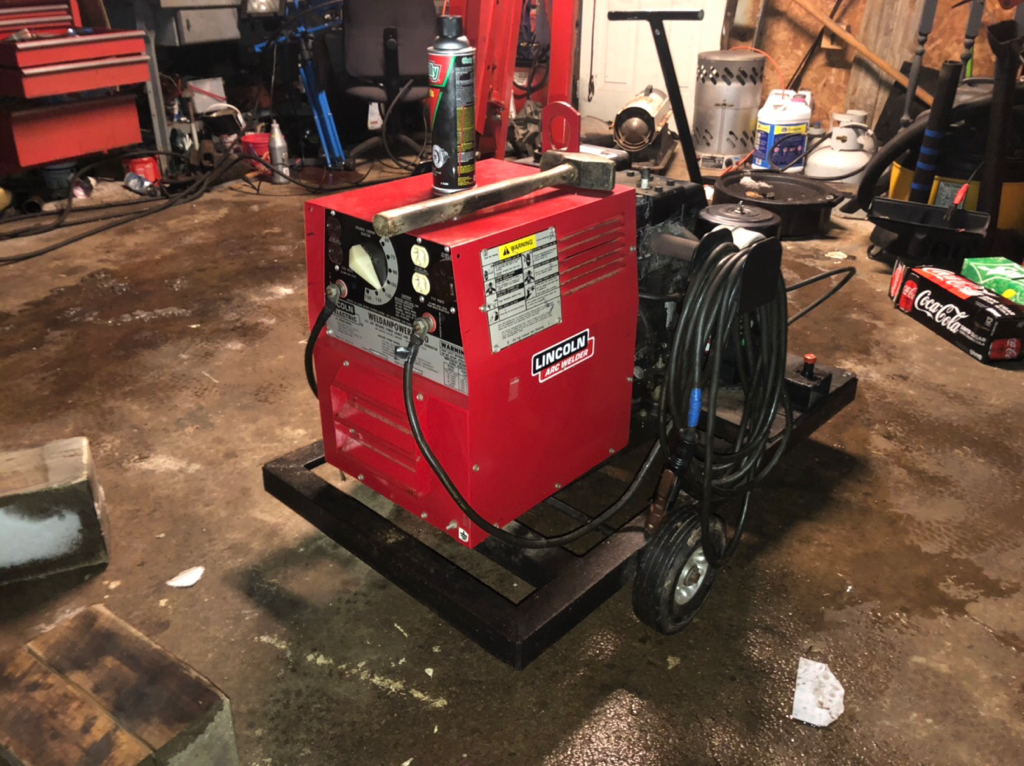 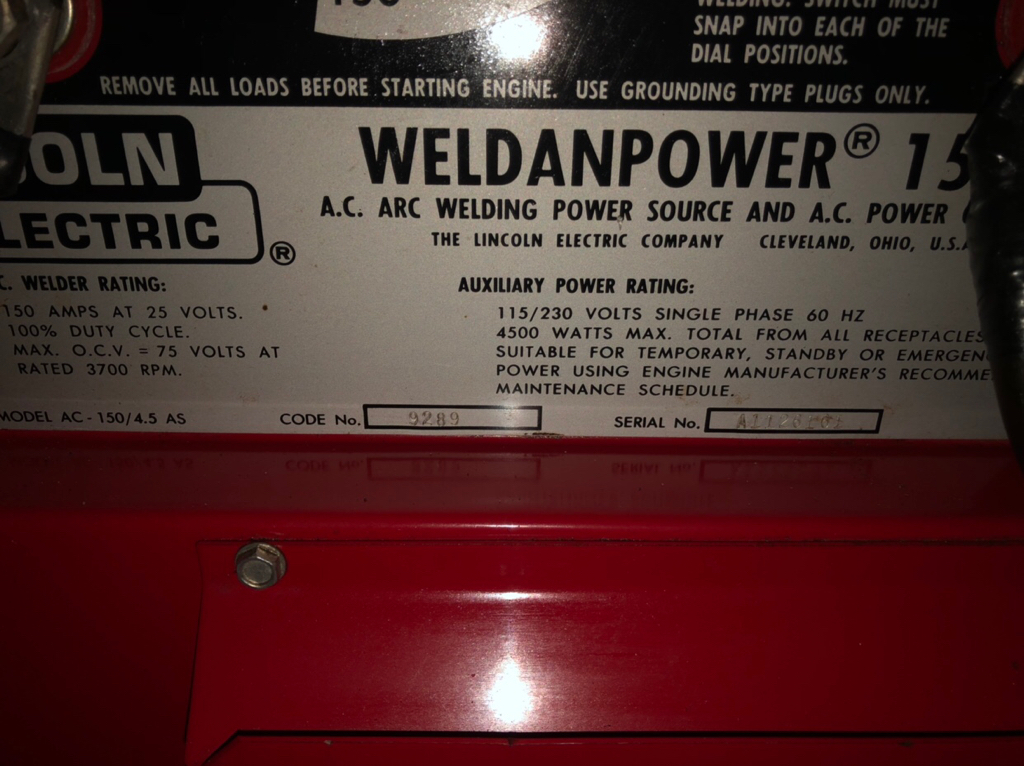 1988ish Lincoln Weldanpower 150. AC only engine driven arc welder that doubles over as a 4500 watt generator.

That's great! What did that set you back? Youv'e done arc welding before?

About $50 in gas. It was my grandfathers. He passed away in ‘96 and it’s only been used a couple times since then. Grandma is in her last years of living alone so I rescued it from a few of my greedy family members.

I do have some experience burning some rod. Mostly 7018, some 7024 and a pretty good amount of 316L. I picked up 5lbs of 6011 and 5lbs of 7014 for basic repairs at home. It’s kind of a lost process outside of pipeline work. We occasionally do some stick welding at work but it’s usually reserved for tight corners or narrow gaps around pipe joints.

Things are on the horizon. 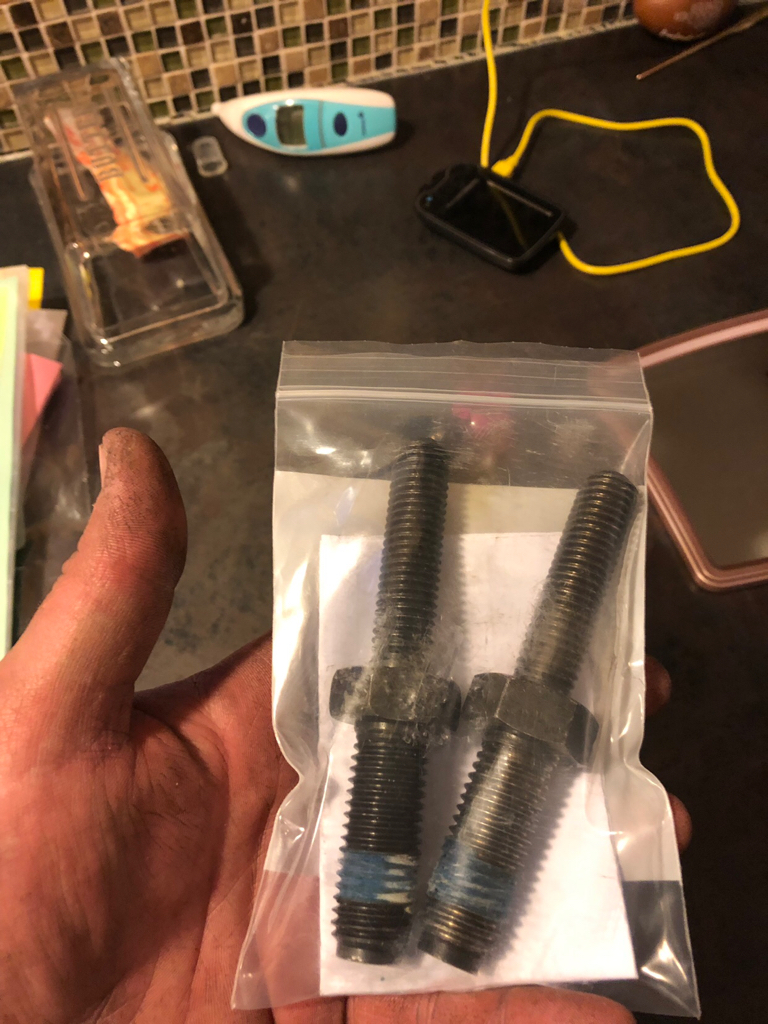 Not a lot has happened with the truck since I last posted. I went back to working nights for the summer so we wouldn’t have to pay for daycare. That hampered a lot of my free time.

I did find the front end rattle that I was convinced was coming from the Warn hubs. Turns out the bolt on the back side of the front diff that holds it to the ttb arm broke. Fixed that. Did some exhaust work and wired up the topper lights.

Made a trip to the UP mid May and rode some two tracks. Nothing broke and my coil spring retainers worked perfectly with the sway bar disconnected. I did end up backing into a clothesline pole and denting/bending my rear bumper. The pole was worse off

Since then, I built a front bumper out of 3/16” plate and plan on building a rear bumper in the fall when I go back to days.

Sorry, no pics. I was using Tapatalk to add pics to my posts but that’s not an option anymore and I’m not going to sit and try to resize pics on my phone until the site will host them. 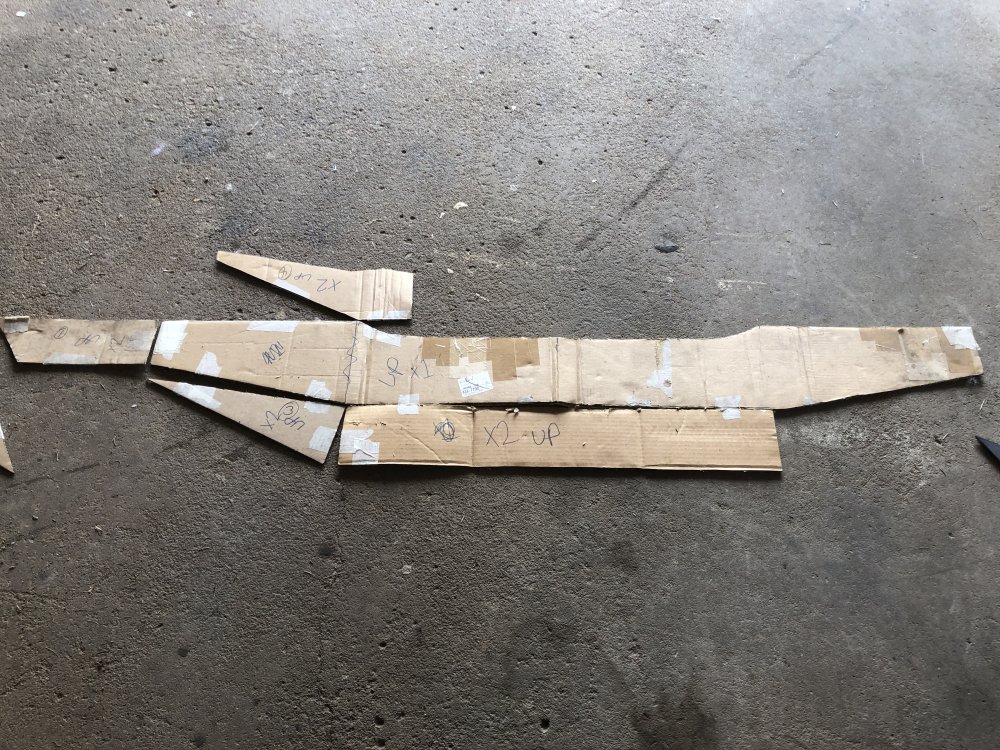 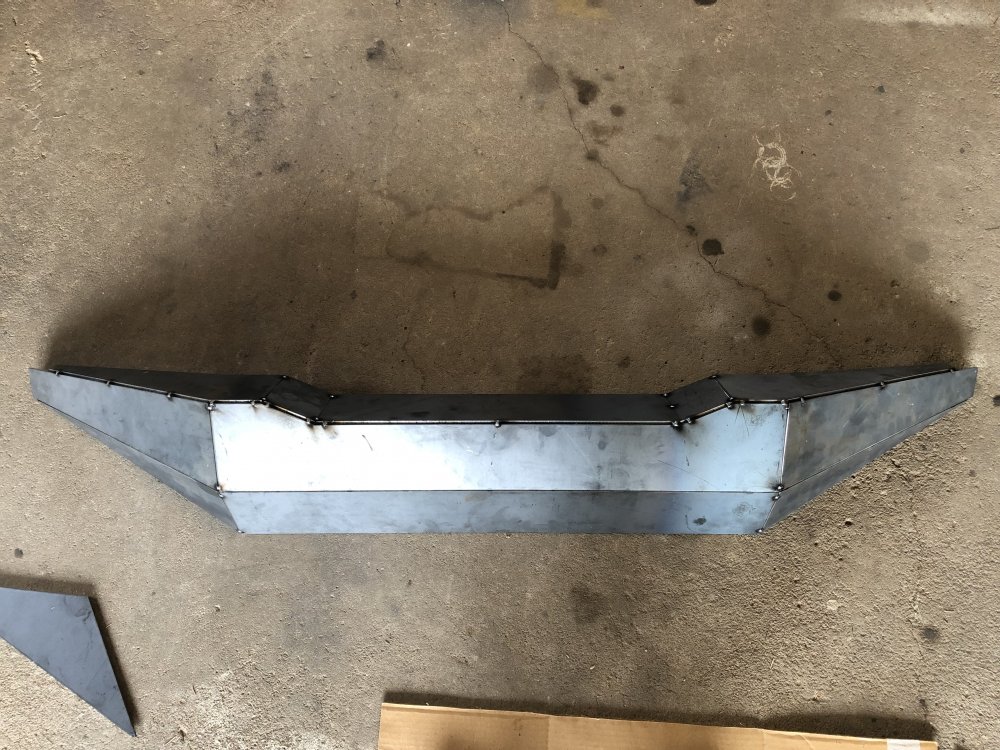 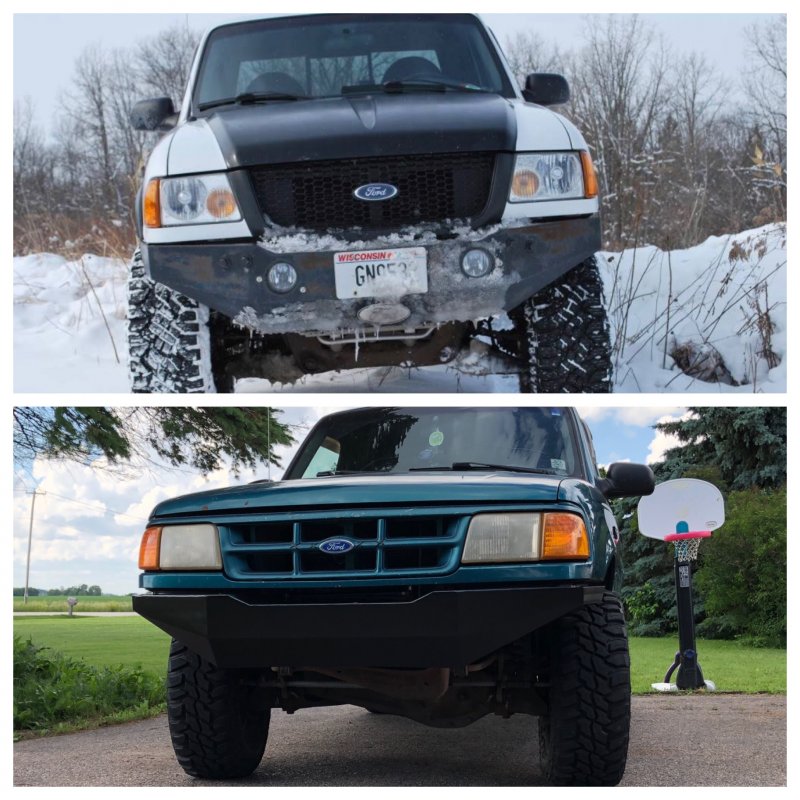 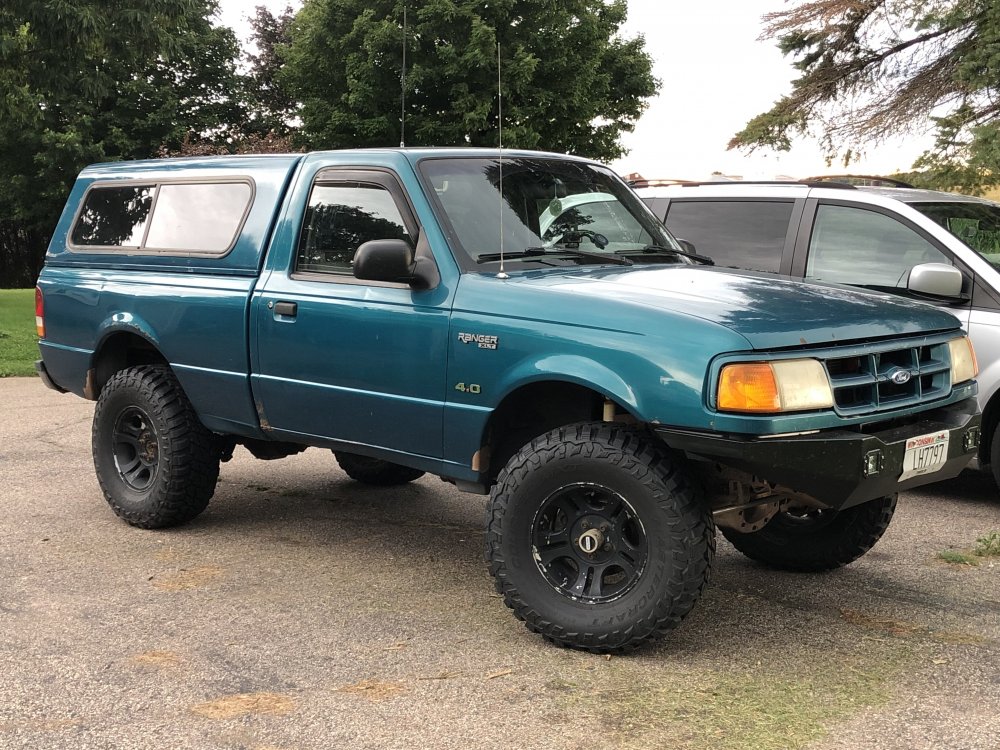 I did manage to get the front end up a little higher with a “washer lift” which actually consisted of stainless steel spacers I cut at work. Sitting right at 36” from the highest point of the wheel opening to the ground.

You did a great job on that front bumper, it flows with the front of the truck. The whole transformation of the truck is remarkable. Will you do a rear bumper for this?

Thank you. I do plan to do a rear bumper at some point. Not sure yet if I want to build one out of plate or 2x6 tube like I did on my old truck. Either way it will have a receiver tube and some recovery points incorporated into it.

DRanger024 said:
Thank you. I do plan to do a rear bumper at some point. Not sure yet if I want to build one out of plate or 2x6 tube like I did on my old truck. Either way it will have a receiver tube and some recovery points incorporated into it.
Click to expand...

Will watch for it. Perhaps a plate rear bumper to match the front. The whole truck will have good flowing look to it. If you did a tube bumper, here is a suggestion. My dad had an ole trusty 81 courier, and he used that truck for construction. He found a metal pipe, maybe 4 - 5 inches in diameter, and he cut it to length sticking out about 2 inches on both sides of the bed. He welded a cap on one end, and filled the whole tube with concrete. He welded a cap on the other end. Made brackets and welded to the truck. Many things hit that tube bumper, and not one dent ever. He had that truck all thru the eighties for construction.