I learned to drive a manual when I was 9 or 10 but growing up in the UP, there were always four wheelers and dirt bikes around. My step-son, who is the 7 year old, is not very mechanically apt so I dont have much hope for him to learn until after he starts driving. My girls on the other hand, love to hang out in the garage with me and will even hand me the correct wrenches when I ask so there's a glimmer of hope there.

Finally got this thing back out into the woods.

Found out the hard way that I’m going to need to strap the front end with stock coils and a 24” shock. Long story short, deep ruts, too much speed and no sway bar. Came out the other side with a little lean. Outside of that it did great. Pretty sure one of the U-joints in the front end bit the dust coming through the same hole but that’s an easy fix.

Made some coil spring retainers at work. 1/4” x 1” A36. Bent in a manual bender. 7/16 holes with 3/8 hardware for some adjustment. The passenger side needed to be twisted to get it as close to the “end” of the spring as possible. Drivers side remains straight. Pic shows both before one was twisted. 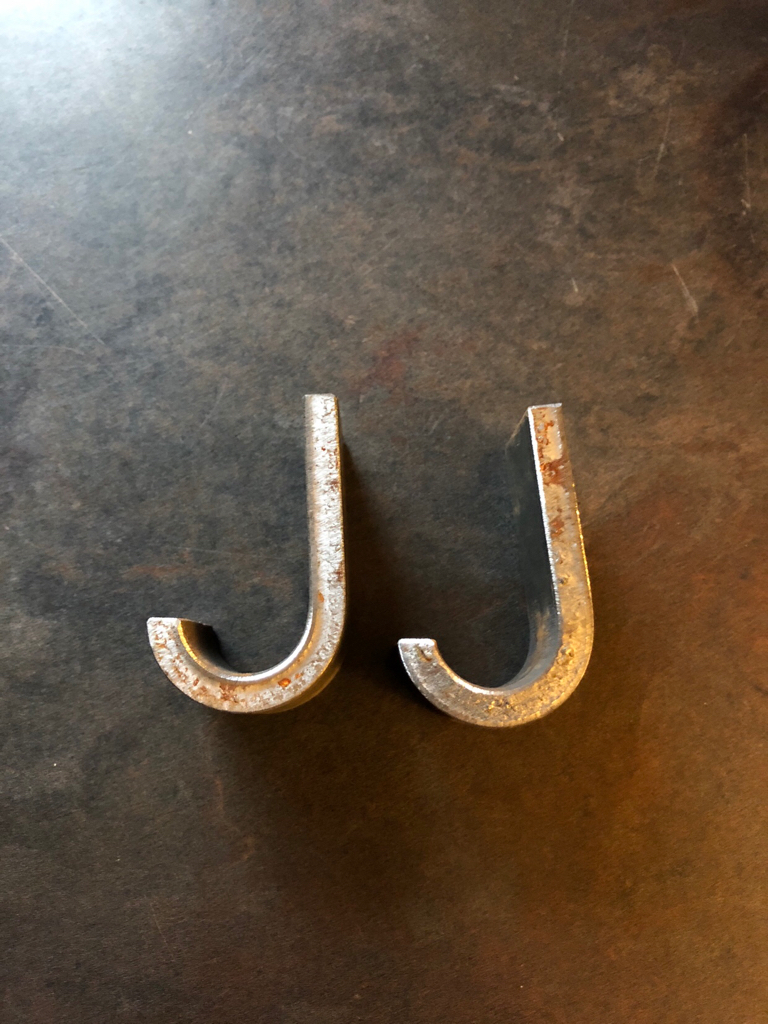 I only took a pic of the passenger side done. You can see the twist and the mounting location as far to the front of the coil bucket as possible. The drivers side is mounted in the center of the bucket pointing directly at the tire. 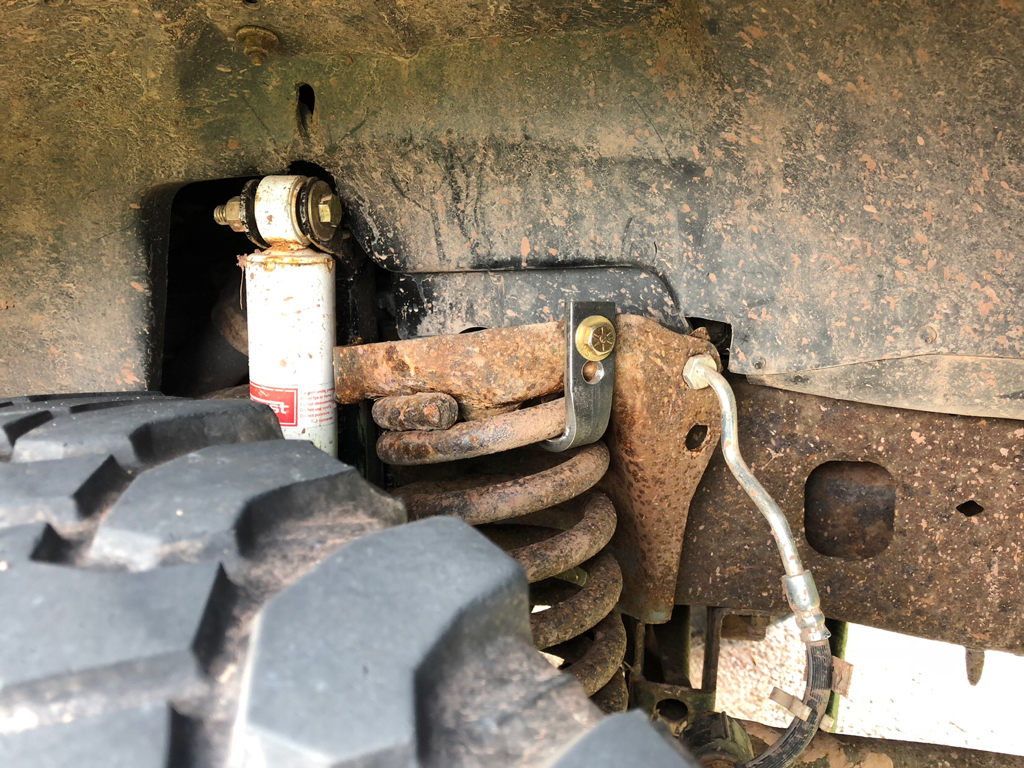 My oldest daughter was my helper for this project. She loves banging around on things with a wrench. 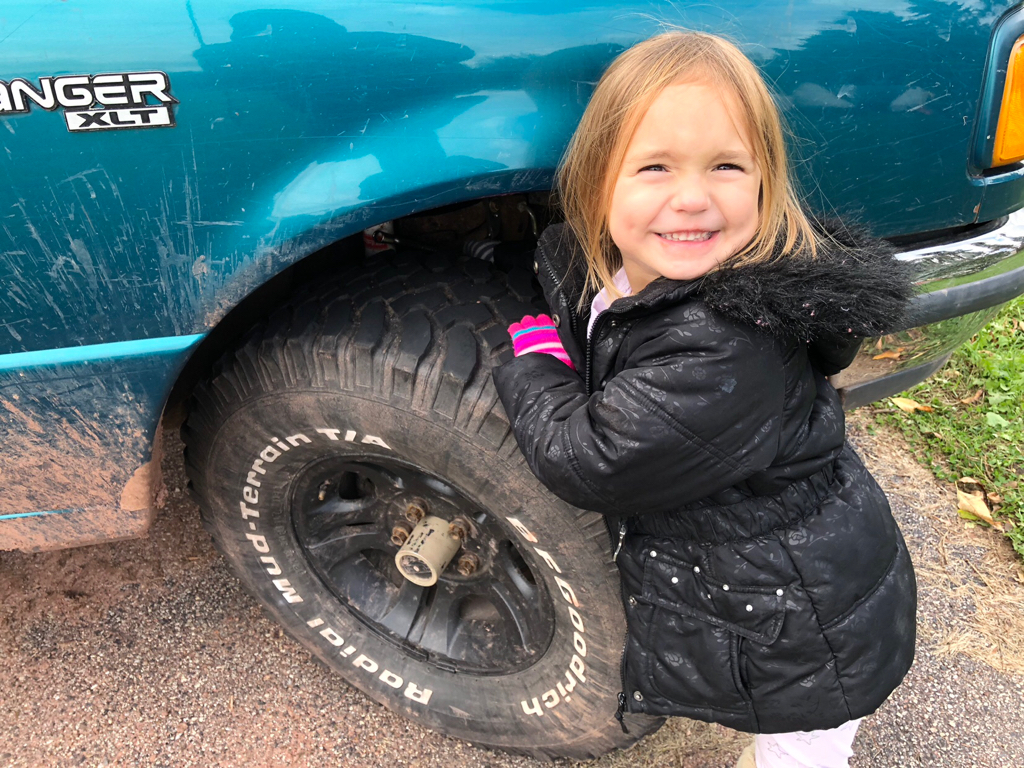 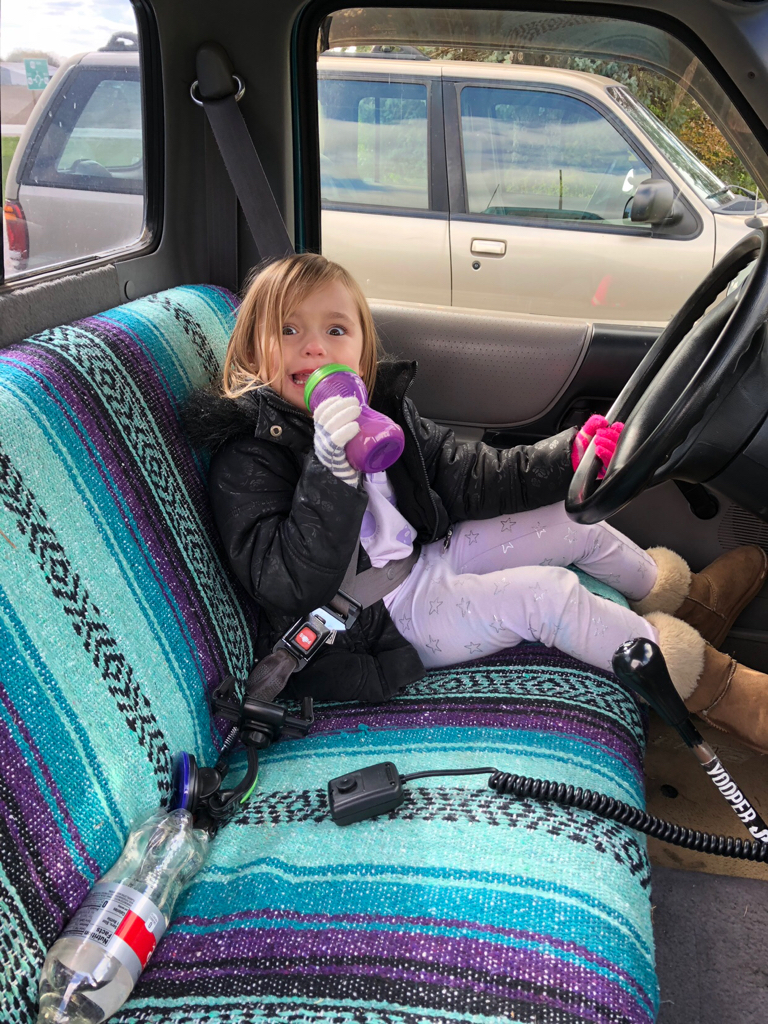 She discovered cb radio that day. I let her talk into channel 18 and even though she didn’t get any replies, she sure had a lot to say!

In unrelated news, my horn quit working which ended up being a corroded connection at the horn itself. Also found a couple unplugged vacuum lines under the dash. Resolved all of those issues just to have the drivers side window regulator bite the dust. New one on order from rock auto. I also ordered a shifter boot that I’m hoping will work with my Ranger/Dakota hybrid gear stick. It’s an omix-ada repop of a Jeep CJ transfer case shift boot. 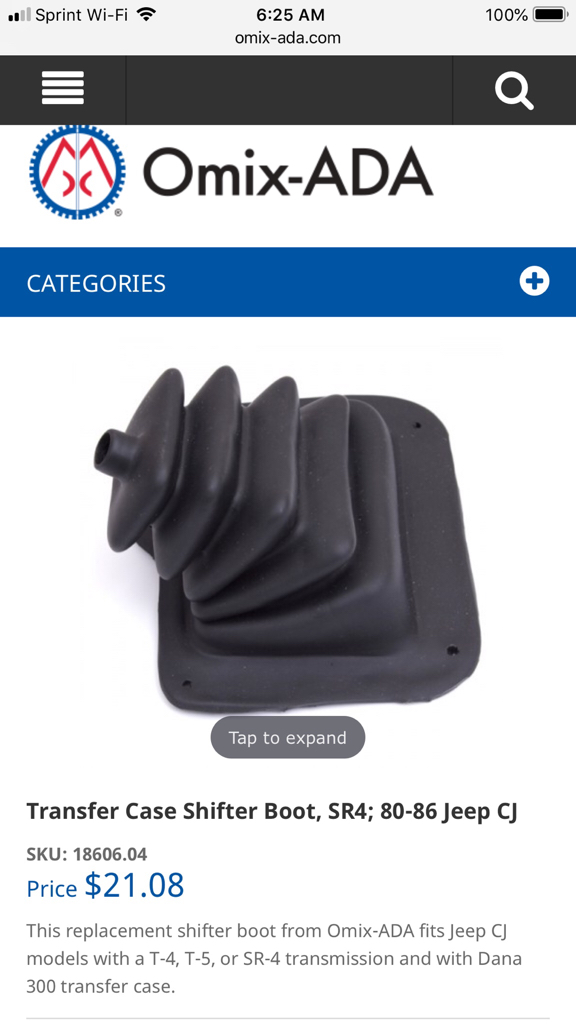 I’m not convinced anyone looks at this thread since I’m terrible about taking pictures, but I’ll keep updating it anyways.

Replaced the drivers side manual window regulator today. Bought a cheapo off of rock auto. This is an extremely easy job with manual windows. There are only three rivets holding the regulator on to the door. Simply hit the steel expander stud in the center of the rivet with a center punch to knock it out then drill out the remainder of the aluminum rivet with a 1/4” drill bit. If the regulator doesn’t fall down inside the door, try hitting the inside of the door with your palm or the side of your hand. I found you need to leave the window loose, as in no tape holding it up, to get the plastic guide on the end of the regulator arm out of the window guide track. You need to be able to push the window up and down. Once the regulator is completely free, push the window all the way up and work the regulator towards the large opening in the door. I found here that it’s best to have the crescent shaped gear down and the regulator arm pointed up to do this. Do the reverse for installing the new one.

I tried using regular 1/4” rivets to reattach the new regulator, no bueno. Even with a huck riveter (hydraulic hand operated) I couldn’t get them all to pull tight. Long story short, I ended up getting a window regulator hardware kit from O’reilly. Dorman part #702-013. The Dorman kit has the correct rivets that split and spread out pulling the regulator to the door. These also happen to be the correct rivets for the outside door handle. Speaking of which, I also replaced since the drivers side had the typical broken spring. Neither job is hard and the door operates like brand new now.

i go months sometimes without visiting the sight, keep posting...kid is cracking me up.

How big is the base of your boot?

I have toyed with getting a Jeep boot, either a bellows style like that one or a vinyl one.

bobbywalter said:
i go months sometimes without visiting the sight, keep posting...kid is cracking me up.
Click to expand...

I hear ya. The site sure doesn’t seem to have the traffic it used to.

I have toyed with getting a Jeep boot, either a bellows style like that one or a vinyl one.
Click to expand...

Do you want the measurement of the bottom bellow? It doesn’t quite fill the opening in the M5od cup holder shifter bezel. It does on the sides but it’s about a quarter inch short on the front and back.

Where it mounts. I have a bezel I want to use. I think it predates the M5OD era though. 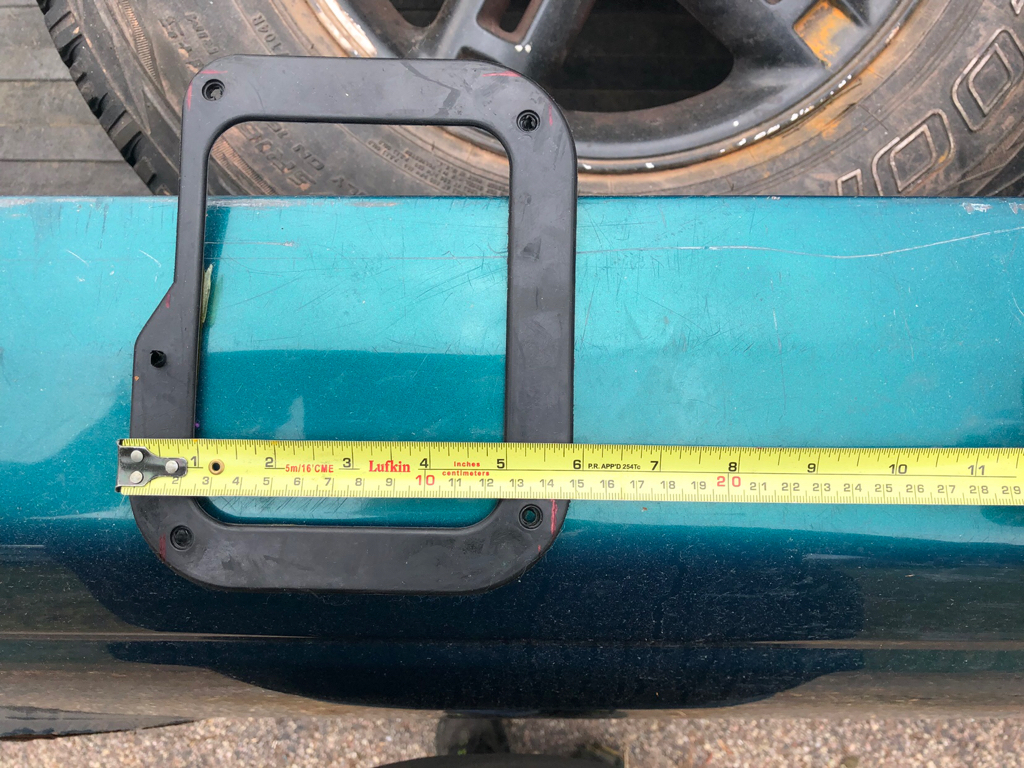 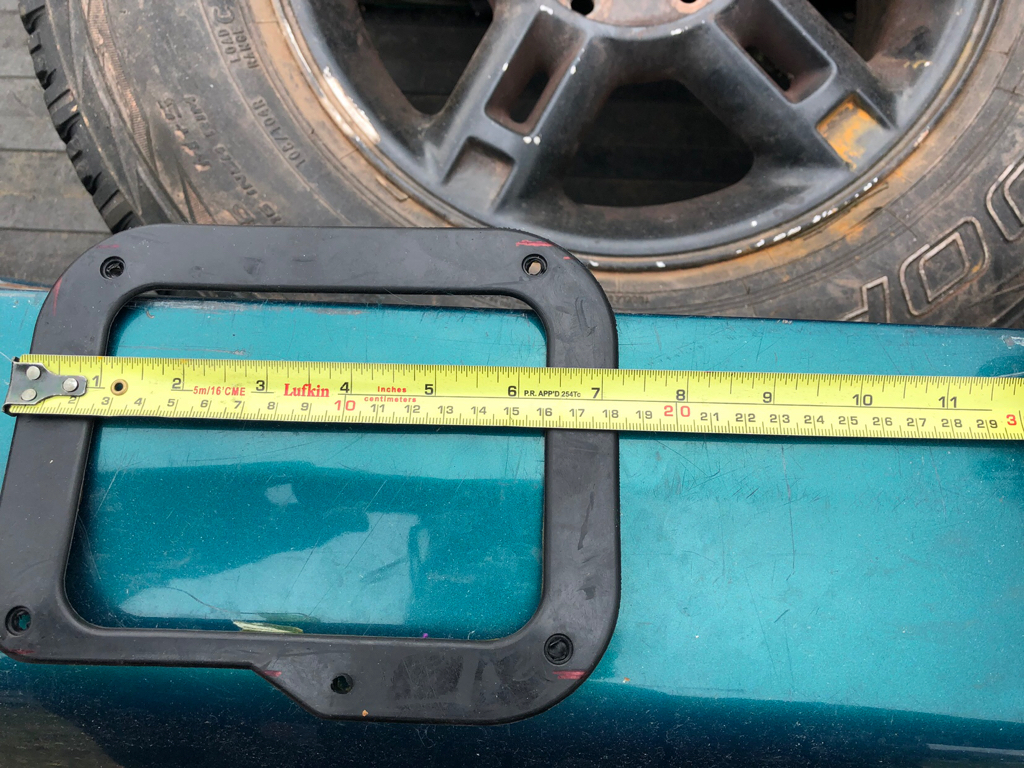 So this junk followed me home today... Nice. Some new ATF in there and you'll be good to go. That's a good find!

I still have the electric shift in my truck because finding a good manual one is difficult!

BlackBII said:
Nice. Some new ATF in there and you'll be good to go. That's a good find!

I still have the electric shift in my truck because finding a good manual one is difficult!
Click to expand...

Honestly, I would have taken it even if the internals were garbage. They’re that rare around here. Something to do with fat, lazy Wisconsin people that can barely lift a finger to push a button. Let alone set their beer down to pull a lever back.

Anyways, plan is to pull it apart for inspection/cleaning and reseal it. I’ll probably weld a stud on the shift lever to accept a threaded knob too. I never did figure out why the electric shift case in my truck won’t shift into 4lo. Problem solved!

So I guess I’m officially part of the twin stick club.

Although I’m excited to have it done, I’m not real happy with the quality of the job. The only reason behind that is the butchered floor plate. I’ll really need to keep an eye out for one meant for a manual trans/t-case to be satisfied.

I forgot to take a pic of the nylon bushing I made for the linkage so this is the best I have. I cut a half inch thick disc off of some 2.5” nylon round stock at work and whittled it down into what you see. Basically drilled a .375” hole for the stud in the t-case side that has a .50” x .25”tall square around it. That left me with a .25” flange on the back side to hold the bushing on the shaft. 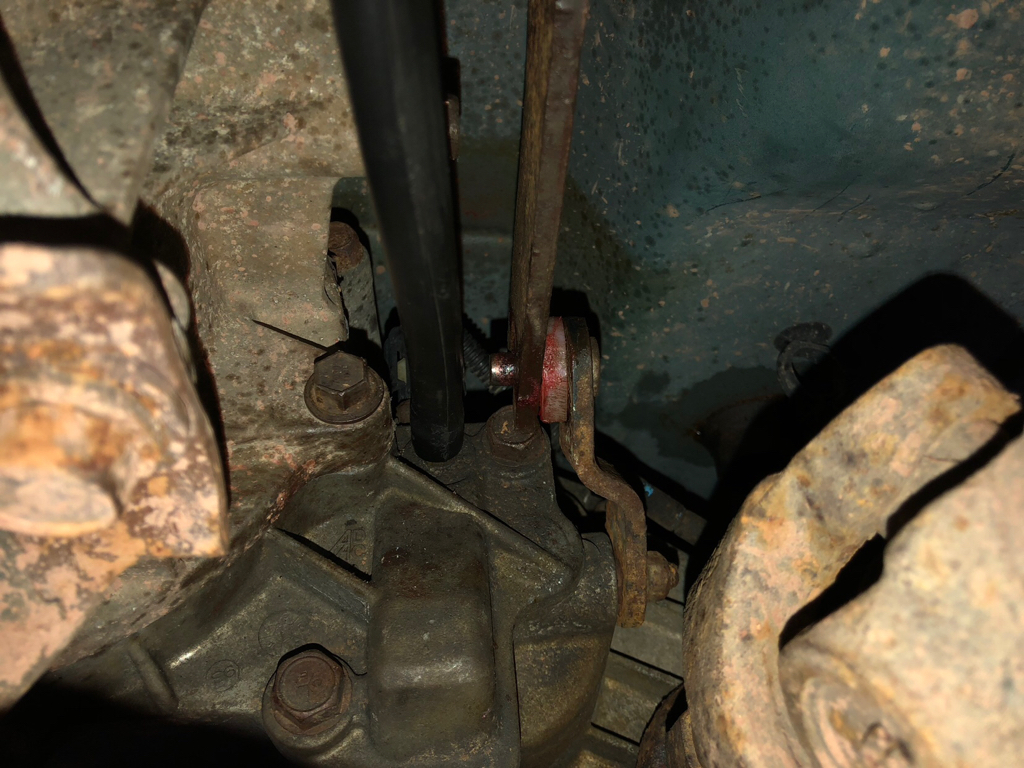 When I started stripping the case of the stuff I didn’t need, I ended up breaking the bolt for the speed sensor off in the case. Drilled it out to finish with a .25” hole and helicoiled it. Thread size was 1/4-20. Fortunately we had 1/4-20 helicoil inserts at work. 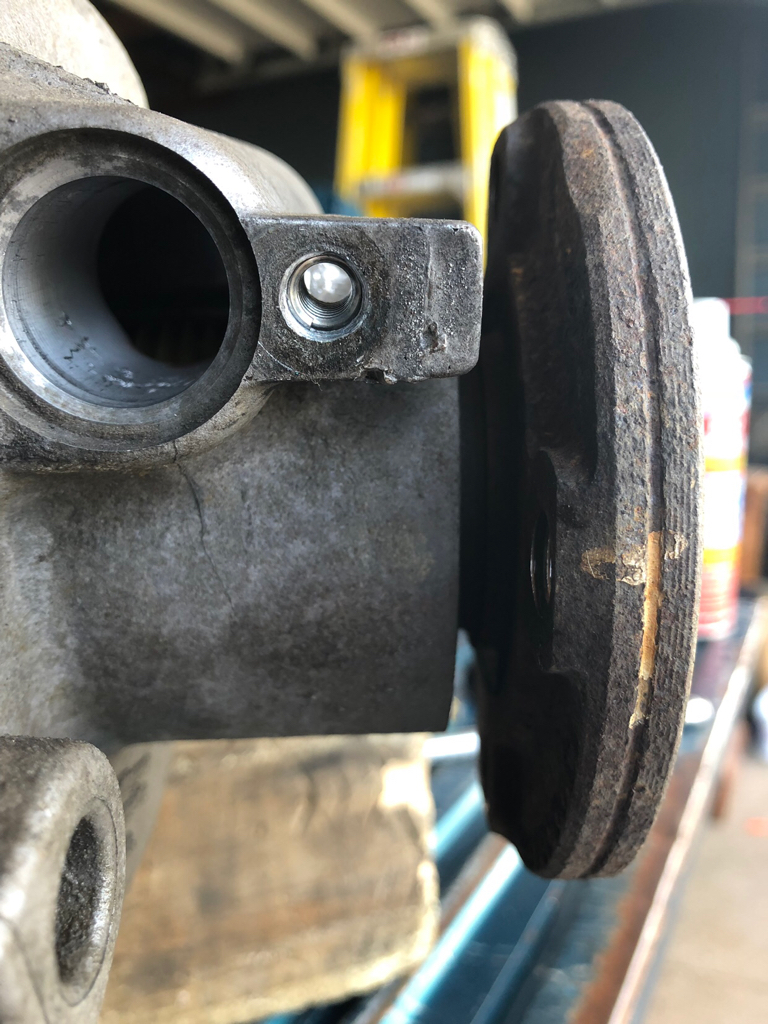 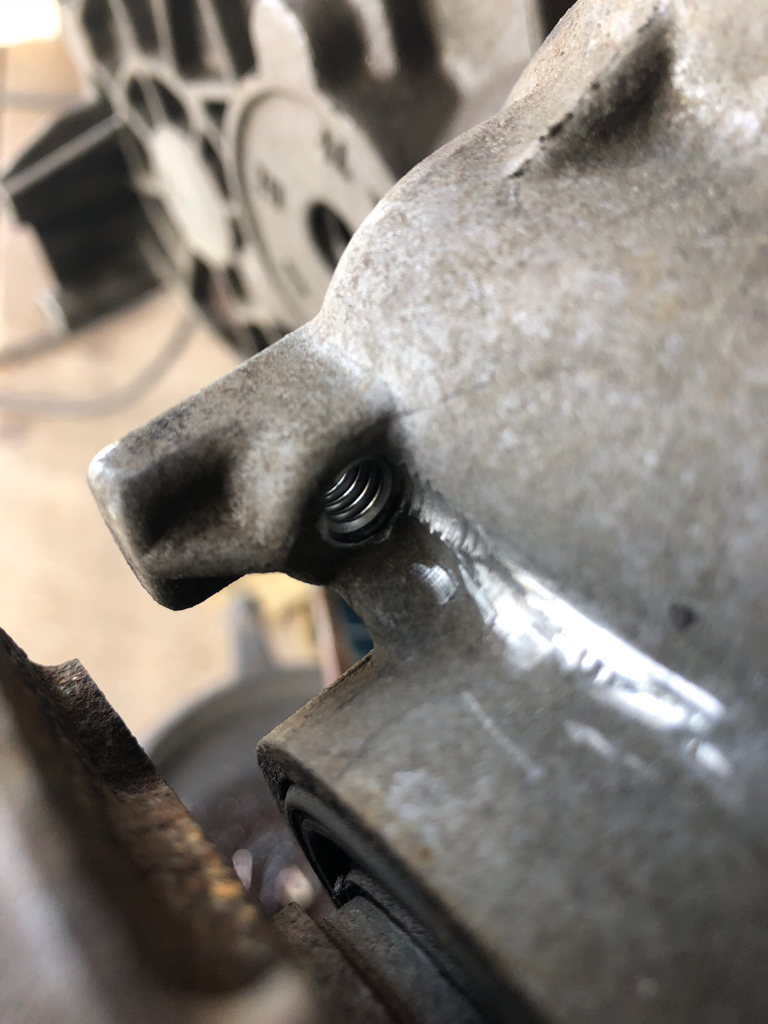 I originally wanted to pull the case apart to inspect the internals but after pressure washing and dropping the fluid that was in it, I decided against it. It was very clean. I did chase all of the trans adapter to t-case holes as well as both output yokes. 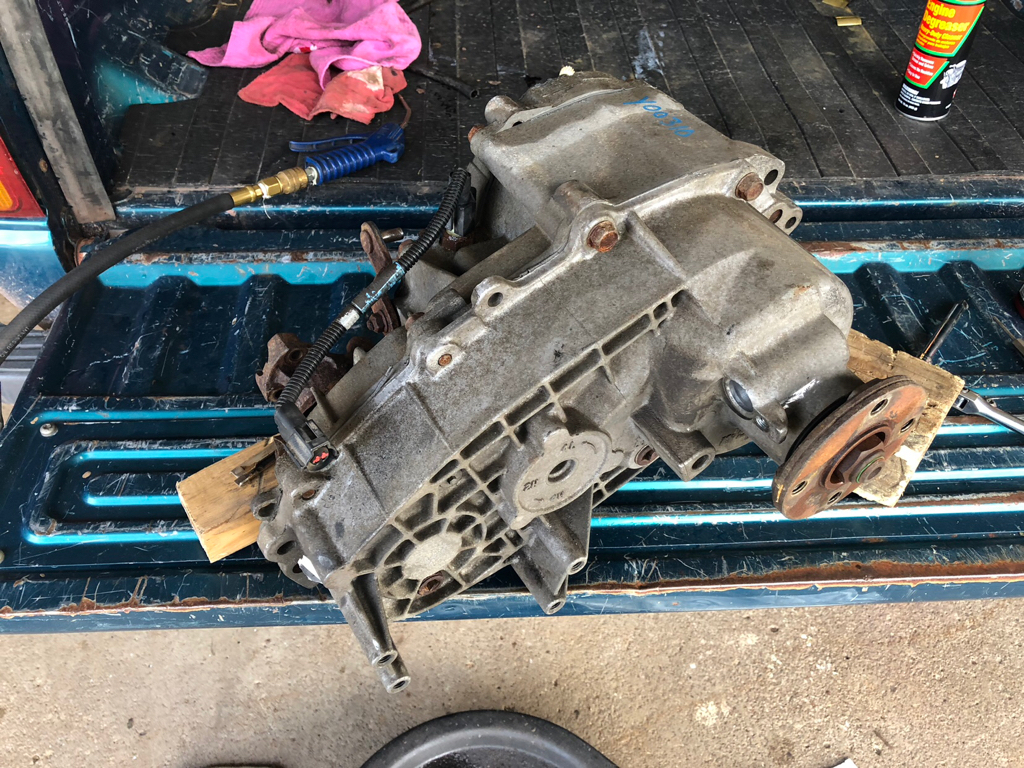 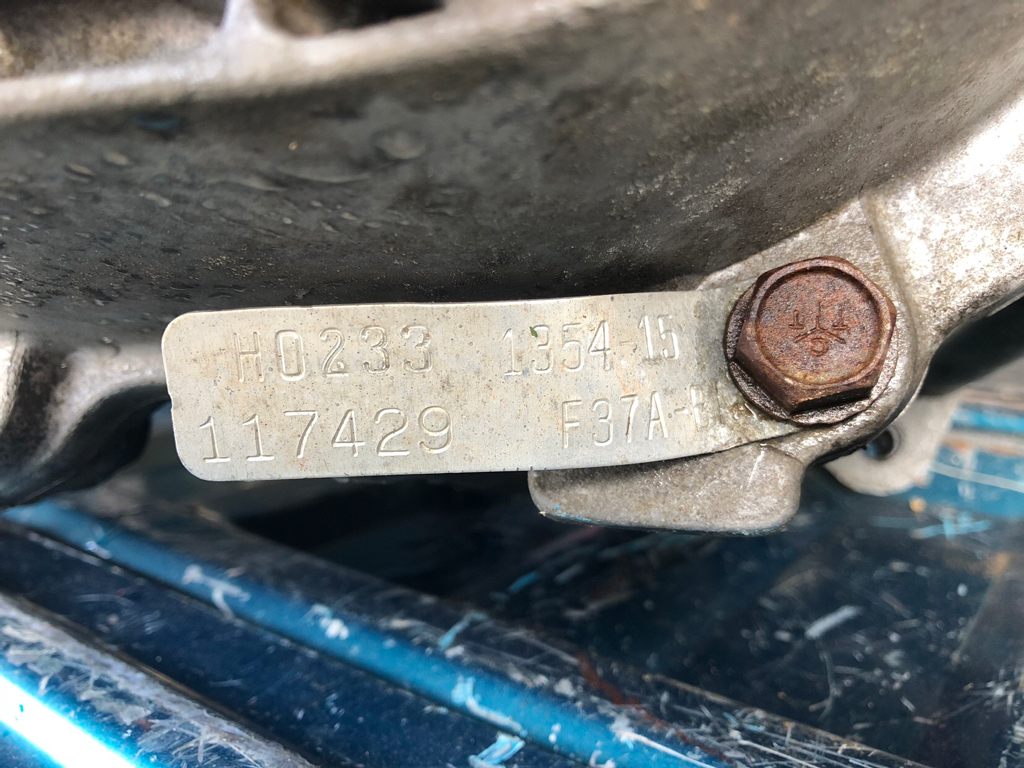 And I finally have working 4-Lo. Still need to switch my Jeep shifter boot over for the trans shifter. 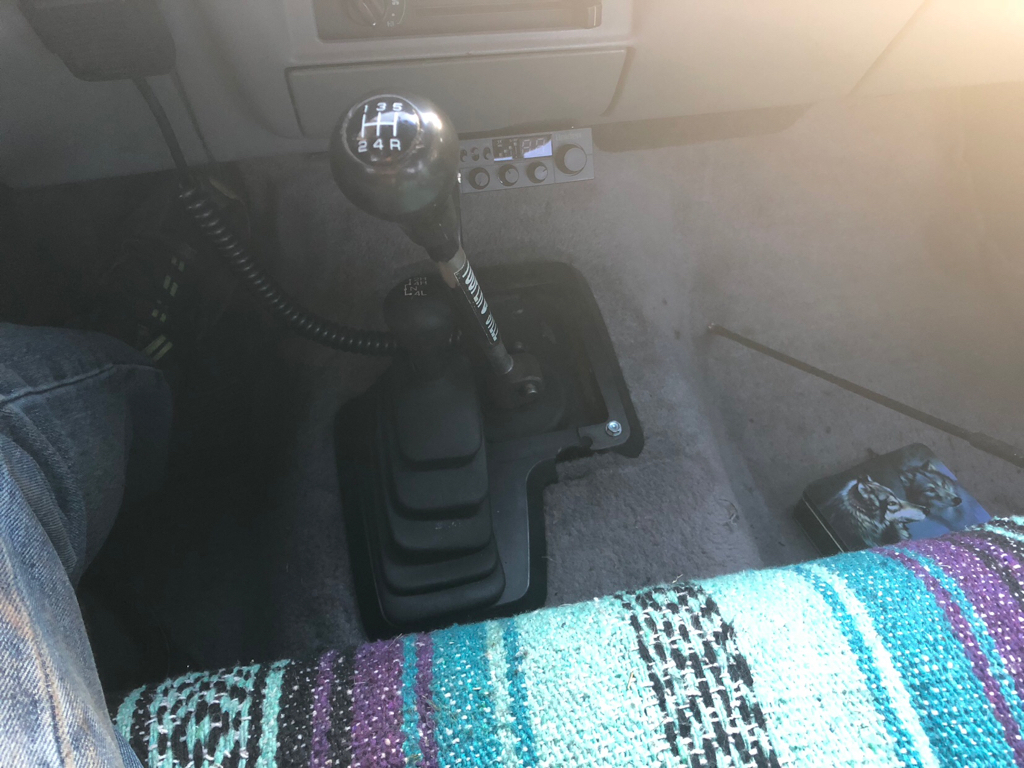 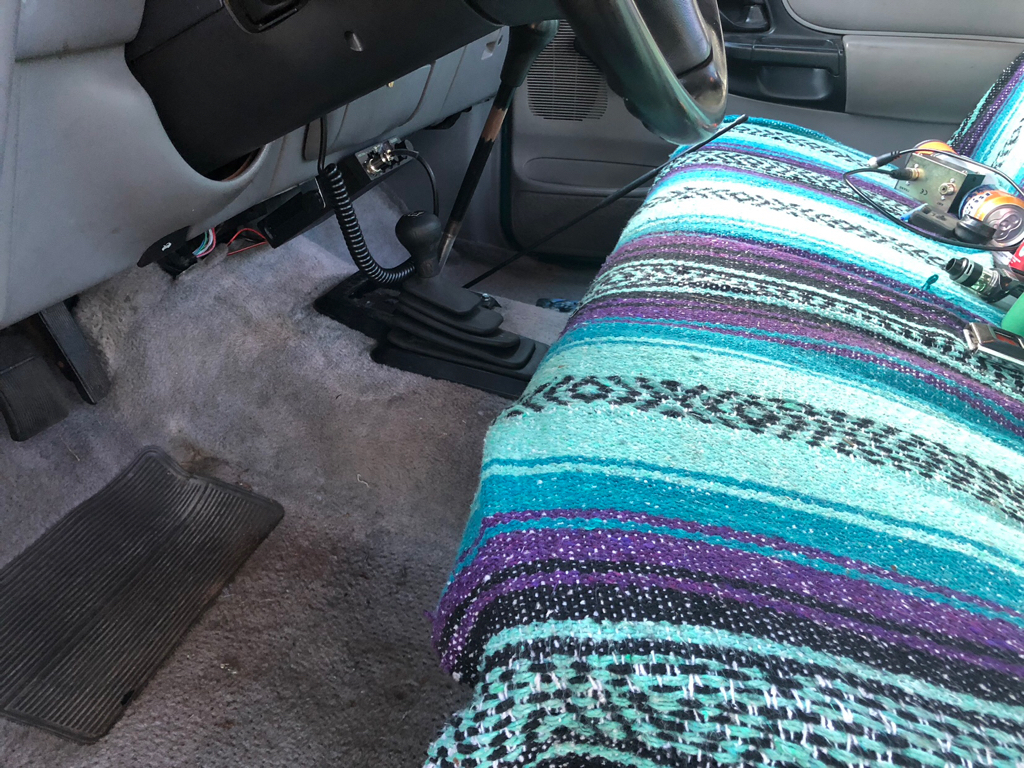 All that’s left is to pull out the electric shift case wiring/buttons and wire up the dash lights. I backed up into the front side yard to run it through the ranges and make sure I had the shifter gate adjusted right. Everything is working perfectly. I’m a happy camper. I did however notice my rear pinion seal is leaking though so that’s on the to do list now. 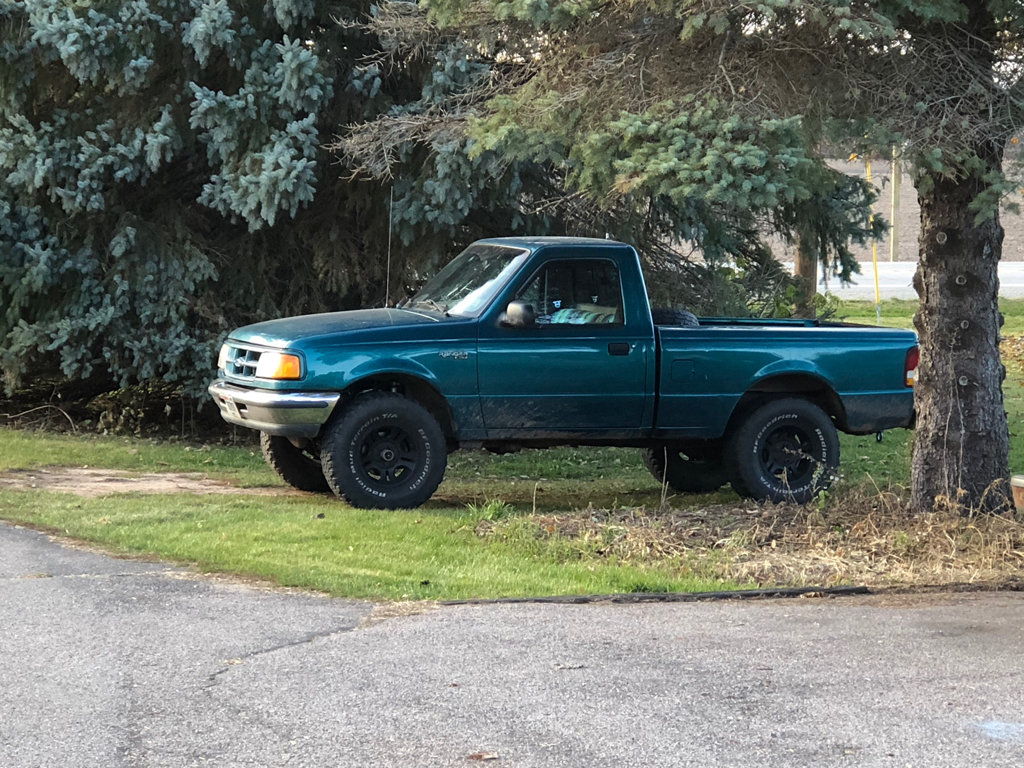 Accidentally snapped this one while I was crawling out from under it after a test drive. The Explorer is my DD/kid hauler. 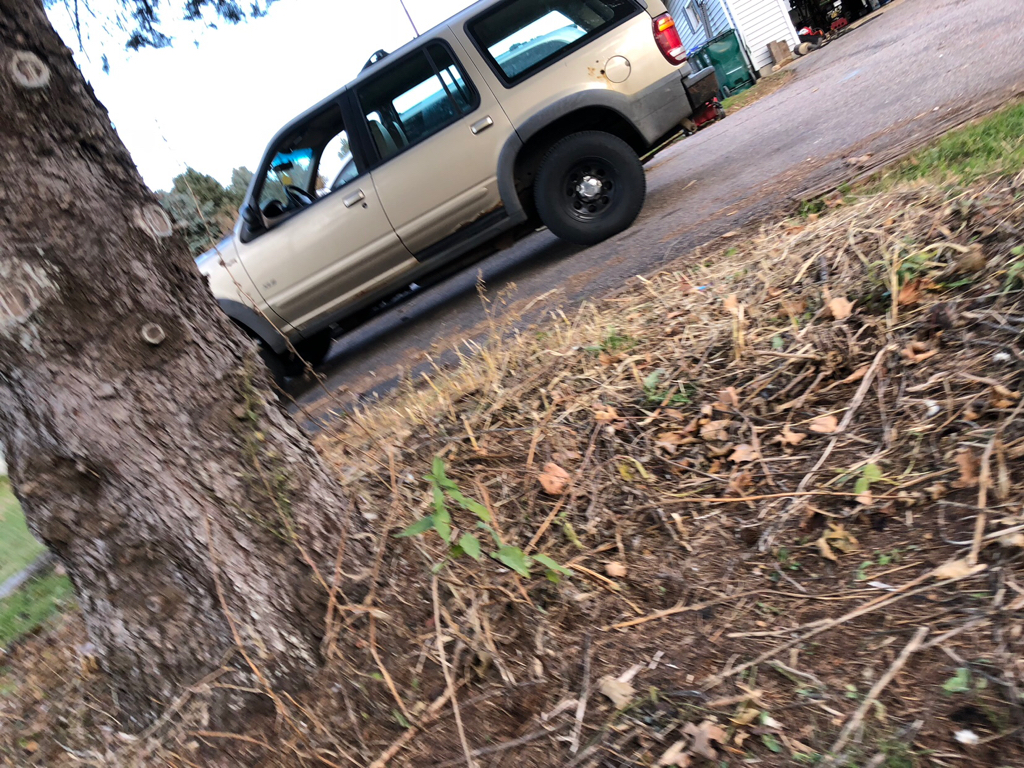 Made it out to the junk yard today and managed to find the factory wiring harness for the dash lights with a manual case. Also found a wood grain dash bezel/ashtray in a BII but I’ll have to go back for that. I don’t know why but I really like that hideous wood grain.

Made some coil spring retainers at work. 1/4” x 1” A36. Bent in a manual bender. 7/16 holes with 3/8 hardware for some adjustment. The passenger side needed to be twisted to get it as close to the “end” of the spring as possible. Drivers side remains straight. Pic shows both before one was twisted.

I did it this way to try to keep the springs equal length at full droop. I actually left a slight gap between the spring and the retainer on the passenger side to try to compensate for it being a little farther down the spring than the drivers side. The drivers side retainer is mounted tight to the coil.
Click to expand...

since the beams are different lengths and travel in different arcs, the spring equalizing issue...is not an issue. i put guides in at one point before i went to bags to extend droop...
You must log in or register to reply here.
Share:
Facebook Twitter Reddit Pinterest Tumblr WhatsApp Email Link