This was shortly after I bought it. It was completely stock and came with all the original paperwork and every single receipt since it was new. 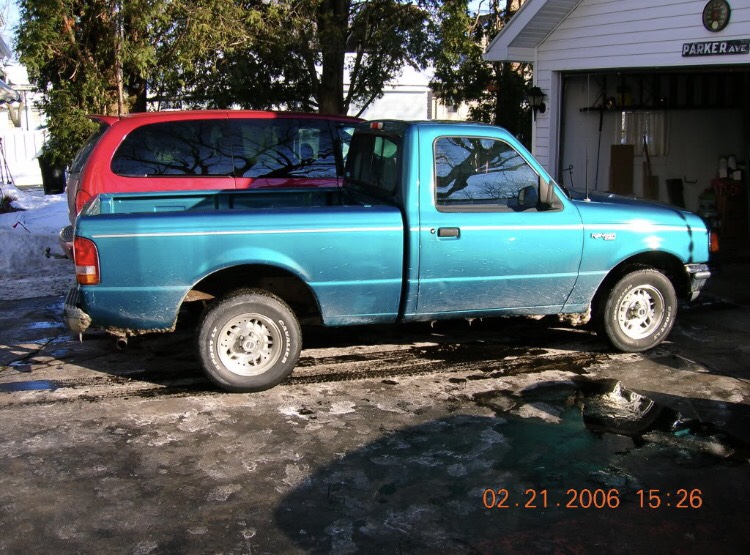 Fast forward 13 years and this was basically how I got it back. I had lowered it a couple times at one point and the front end was shot/. 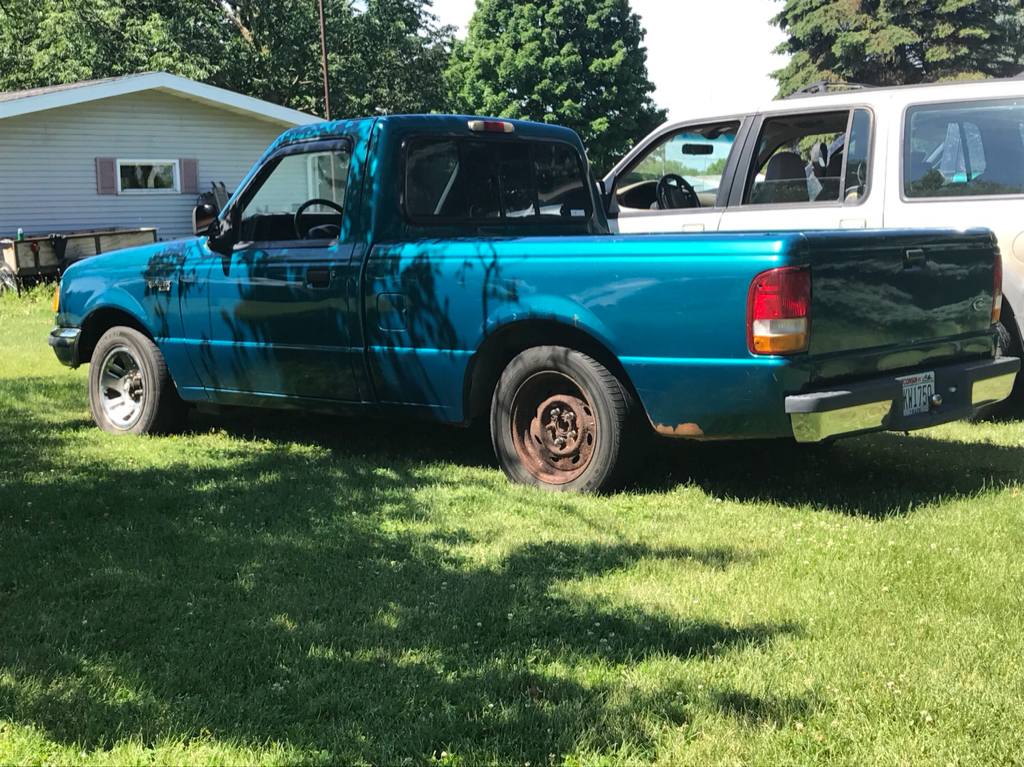 This was the '97 B4000 donor truck I traded my clapped out Dodge 1500 for. It had no title and the body was trashed but the motor and trans both worked like they were new. 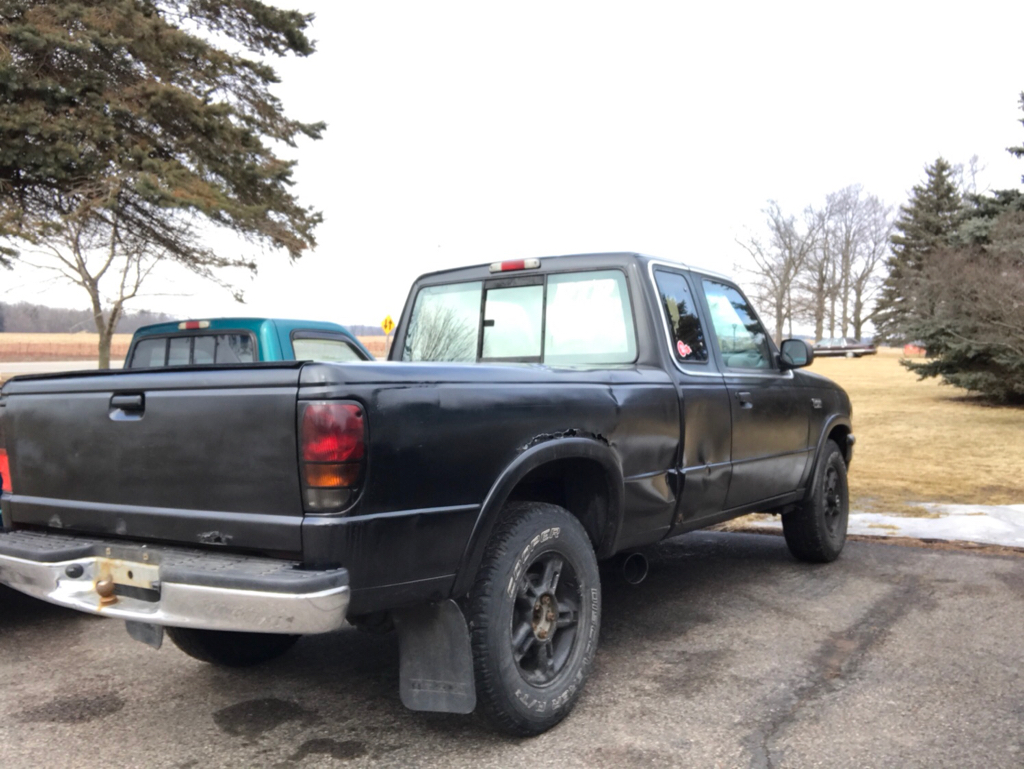 Stripped right down to the cab and engine cross member out 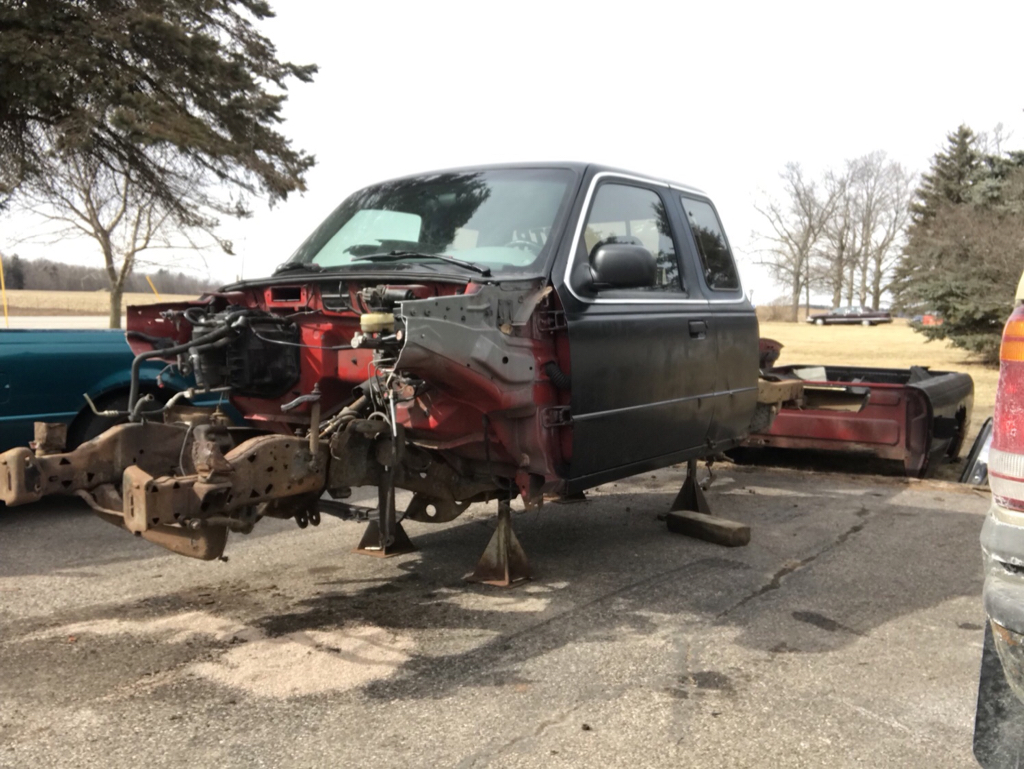 4.0 in my Ranger after new gaskets and converting it to '93 engine management. 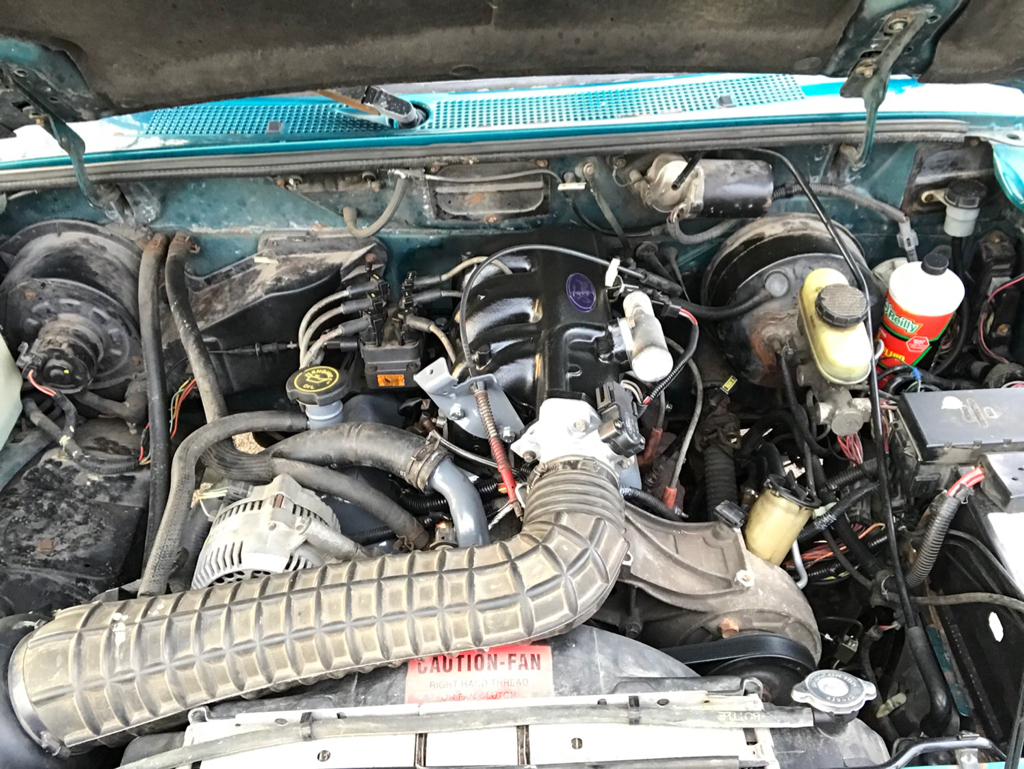 And the Almost finished product. 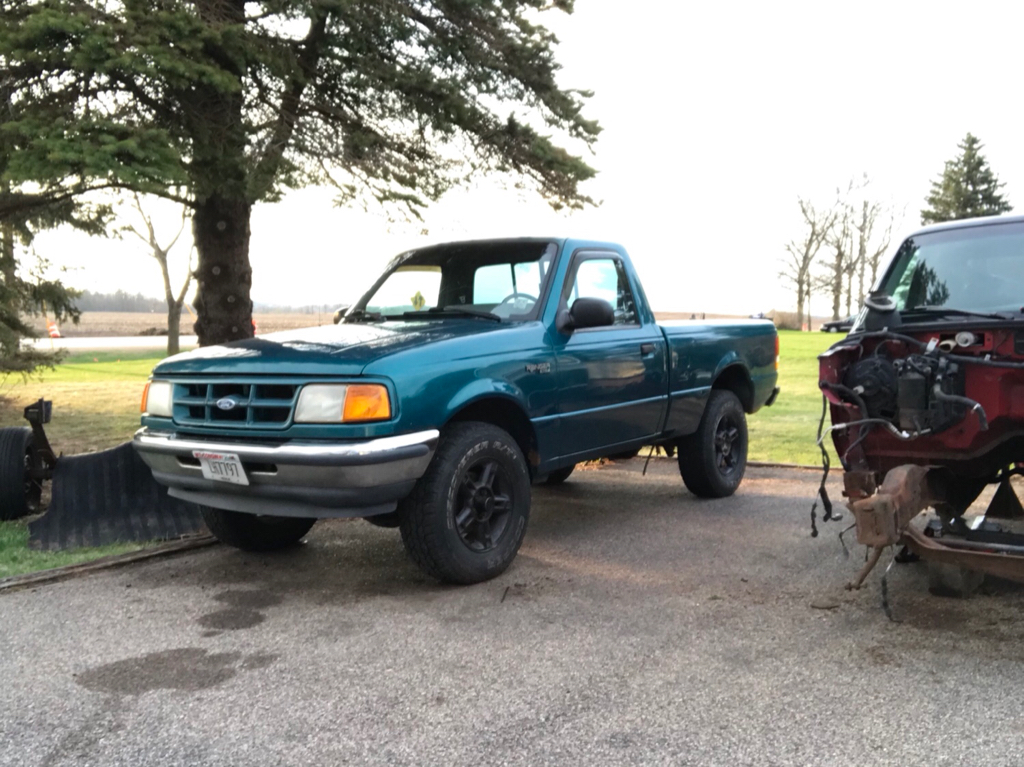 Future plans are to get the front end up another couple inches and Run 33's. It would be a plenty capable truck for the two tracks and little bit of hunting it will see

Nice job. You converted from tib to ttb?

So lose I can almost taste it


alwaysFlOoReD said:
Nice job. You converted from tib to ttb?
Click to expand...

Thanks and Yes. It wasn’t as bad of a job as it’s made out to be.


Sent from my iPhone using Tapatalk
Last edited: May 3, 2018

Some more pics from all the swapping 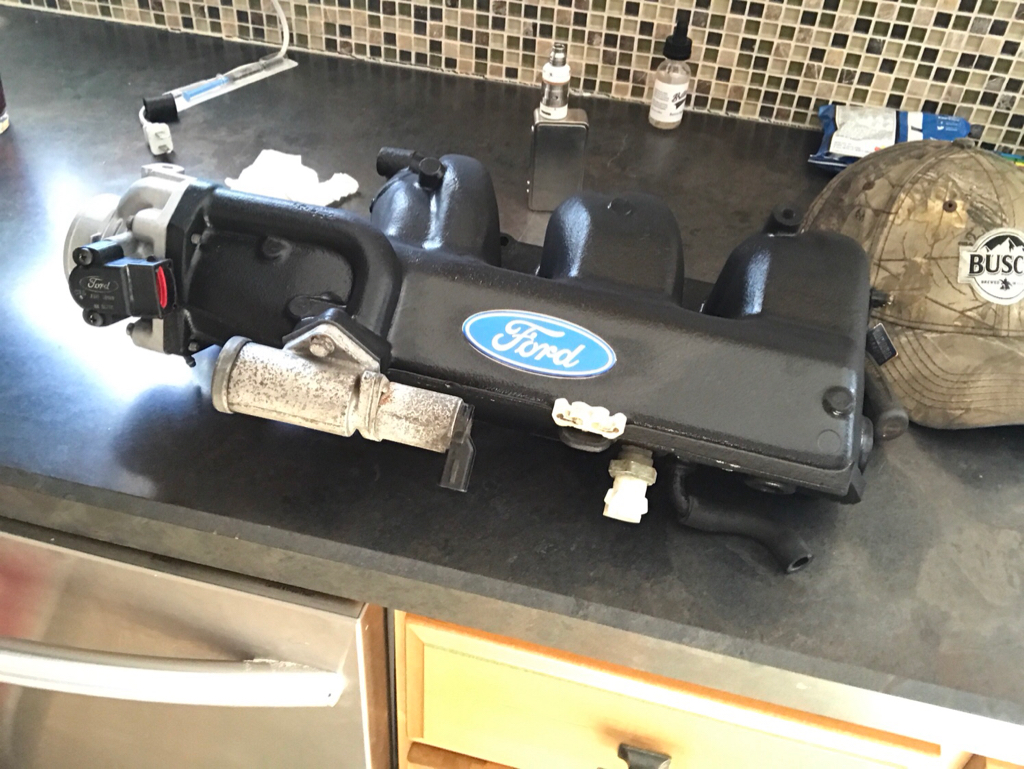 The lower intake on the 4.0 was leaking pretty bad from a poorly done gasket job. There was a small puddle of oil in the bellhousing when I pulled the trans. 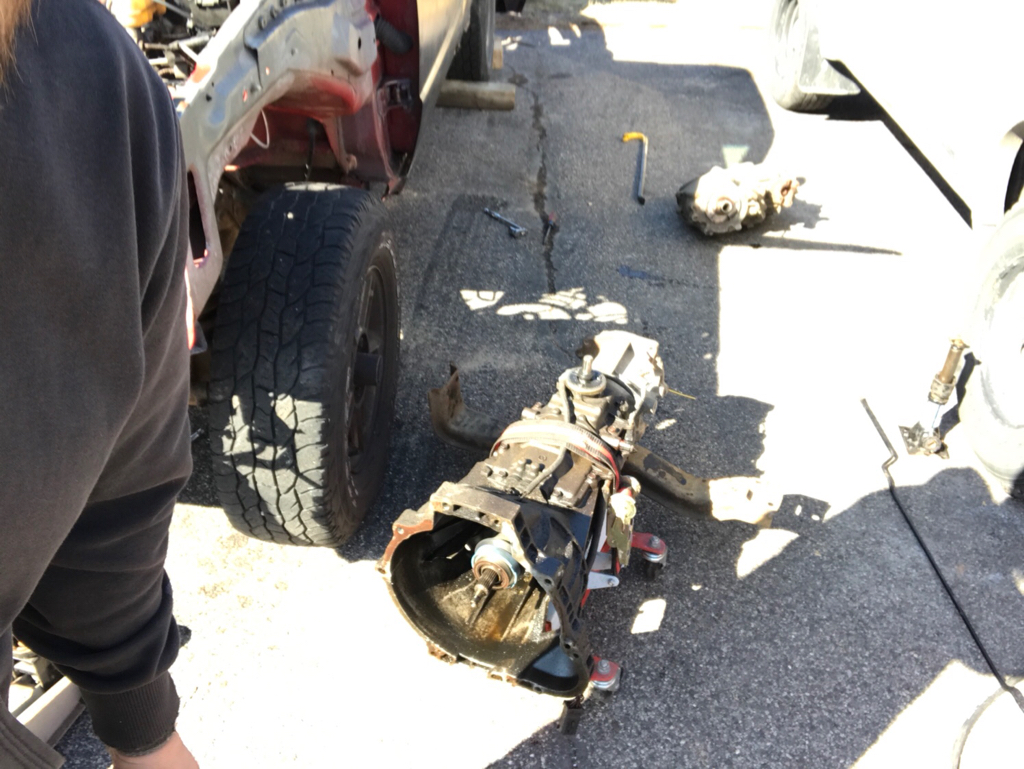 Blew holes through two freeze plugs with the pressure washer. I couldn’t believe how massive the oil pans are on these engines. 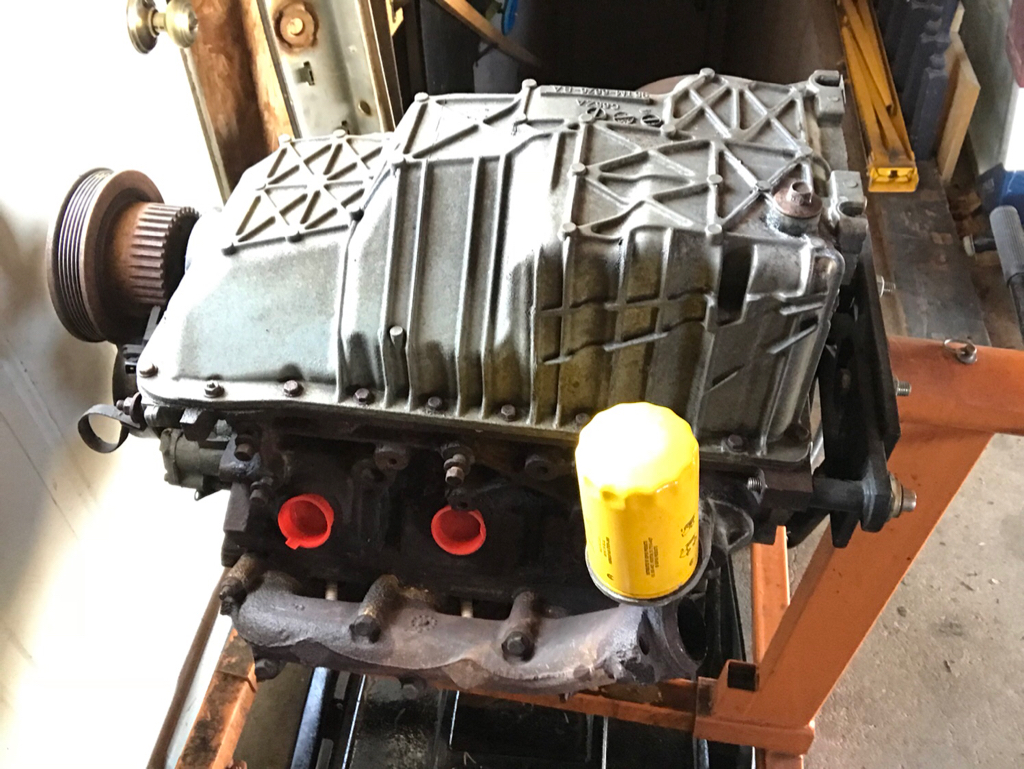 All six freeze plugs in the block replaced and a little paint. The plugs in the heads still had the factory gray paint on them so I left them alone. I used the Melling kit part #MPE278BR for the block plugs. 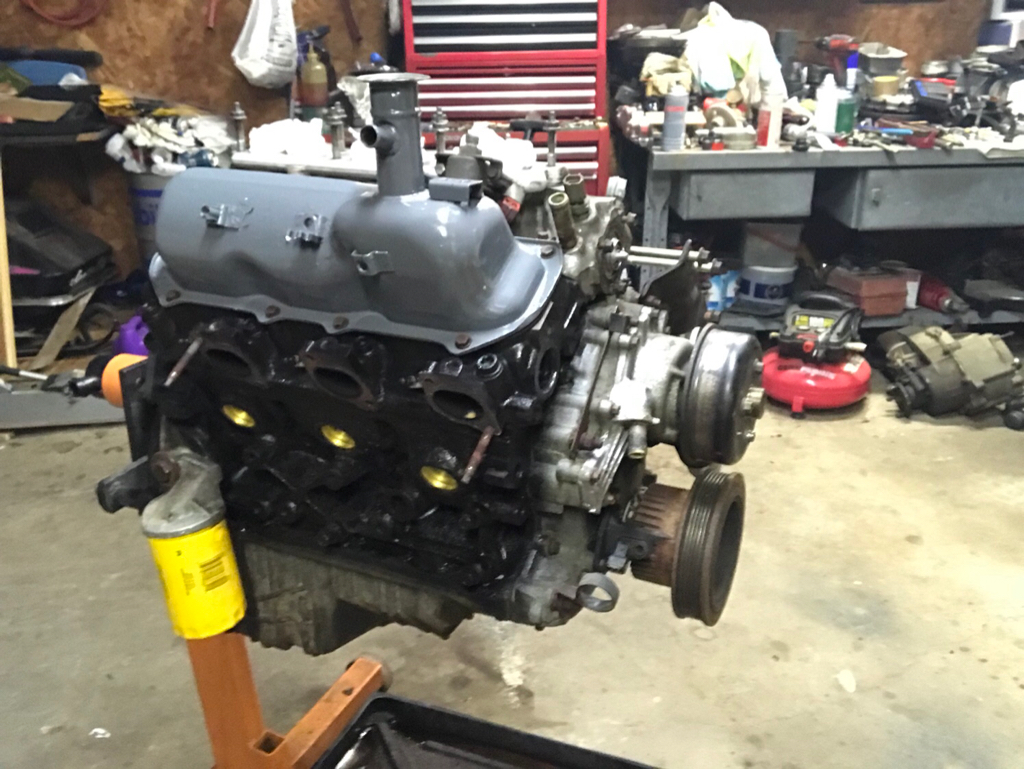 Got the rear end in in a couple hours. I had originally lowered the truck with Belltech’s 4” hanger kit and someone did the hangers on the Mazda at some point so it was a bolt in affair. 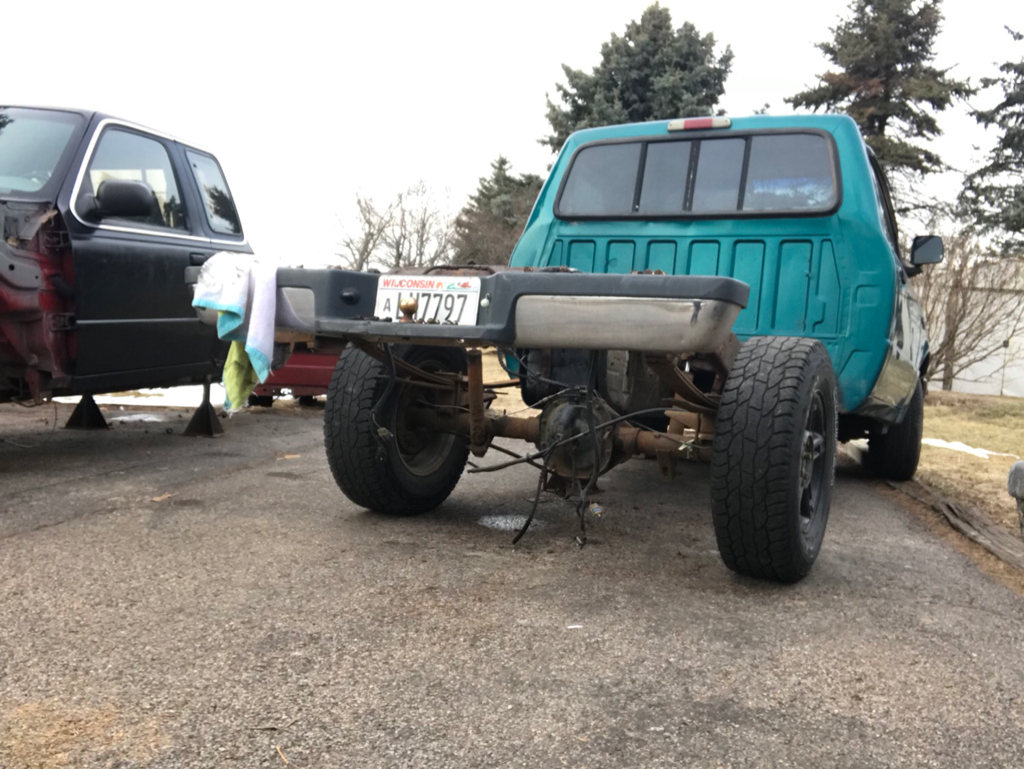 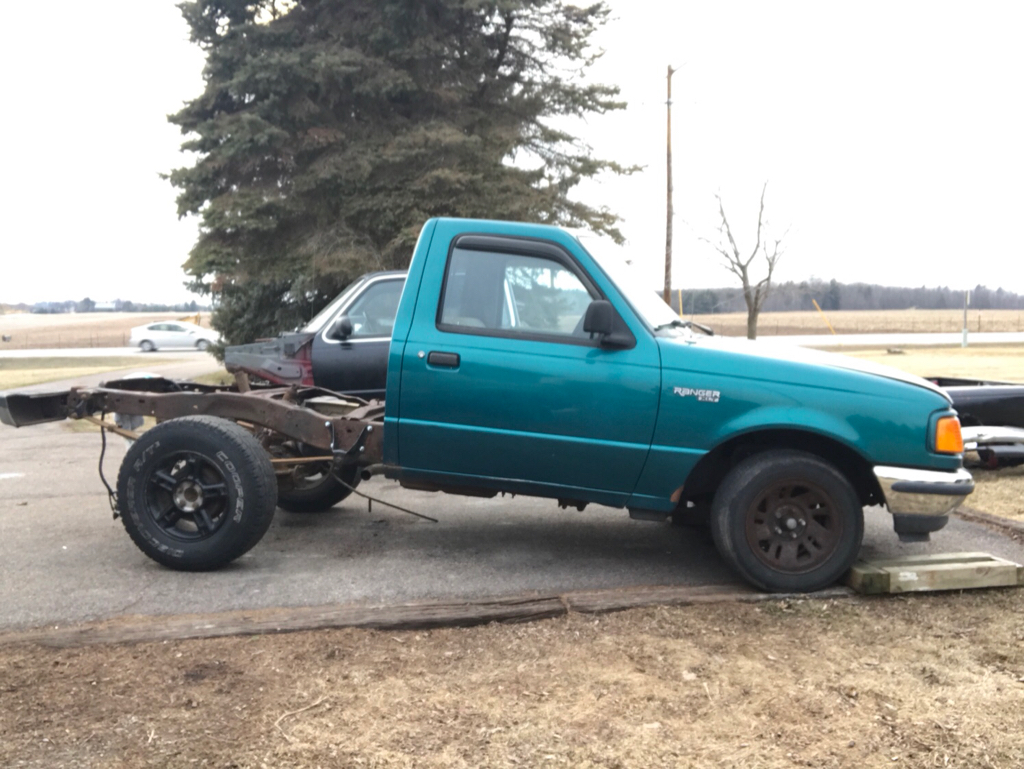 Going under the knife for the crossmember/axle. 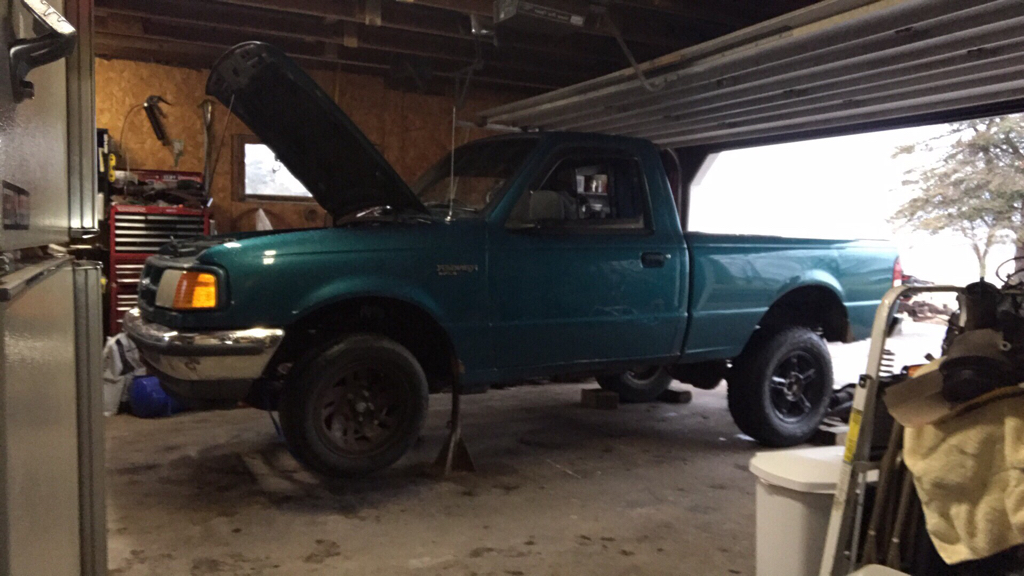 This is what’s left of the frame rails after you hack out the engine crossmember. You can see the weld that need to be cut to remove it. This pretty much destroys the frame. There’s no good way around it. 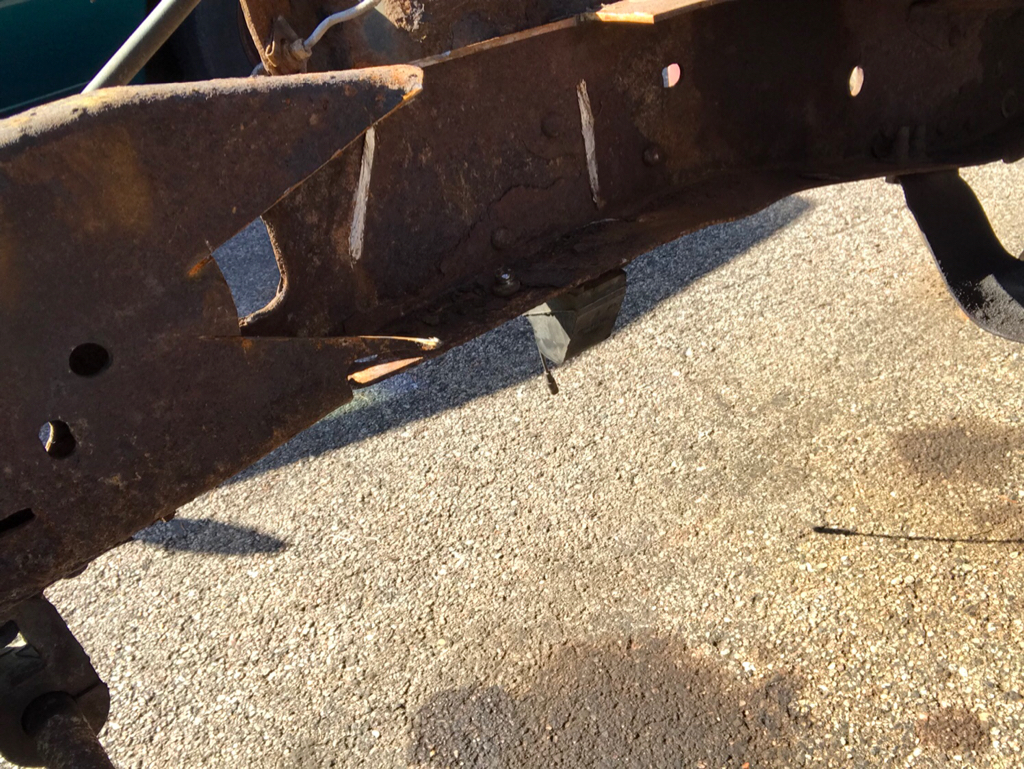 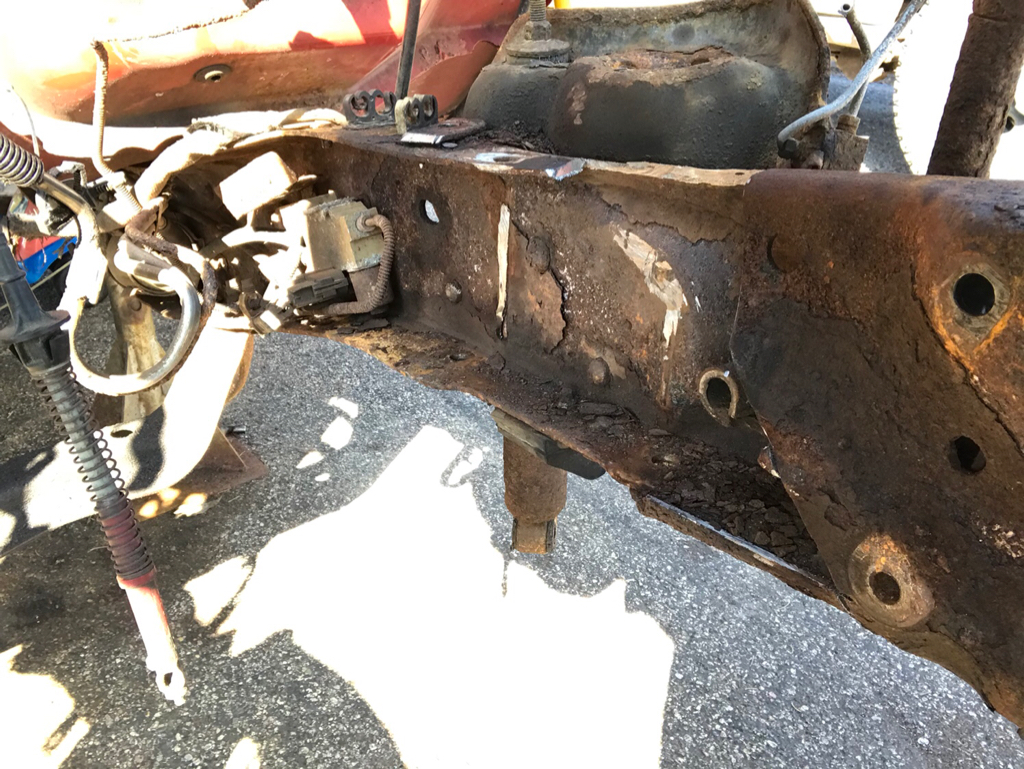 And installed in my truck 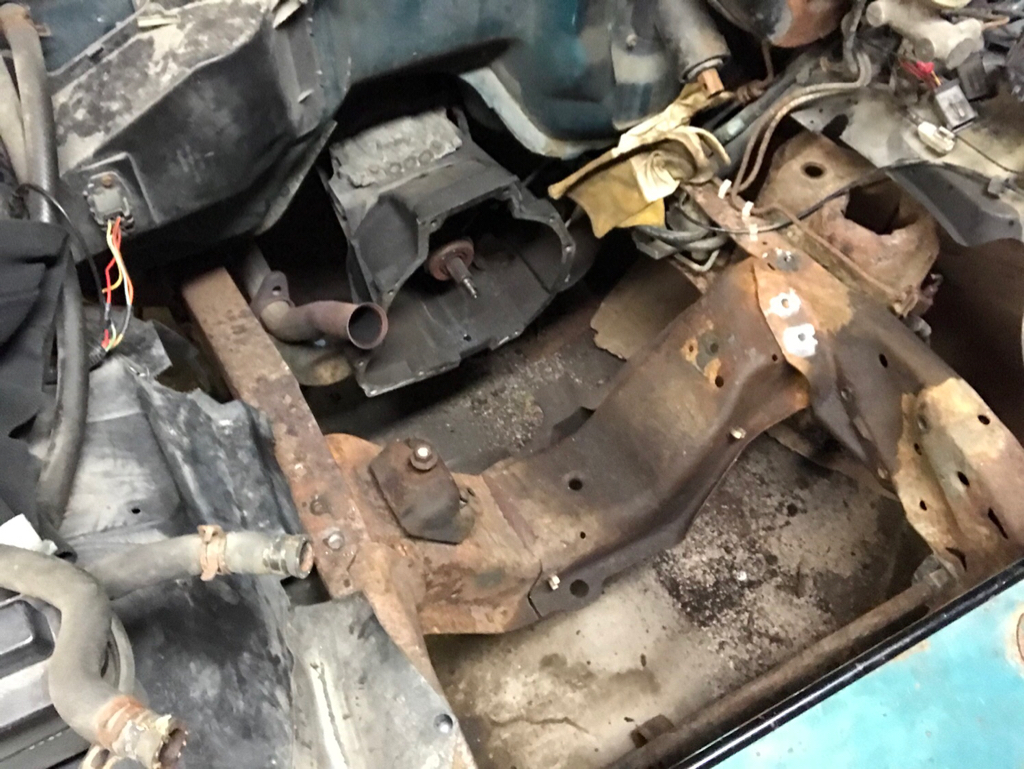 I slit it front and back and bent it to get it between the frame rails. Then used a floor jack to push it back together. Welded it and plated it. I didn’t want to spread the frame rails the 3” you’d need to get it in. 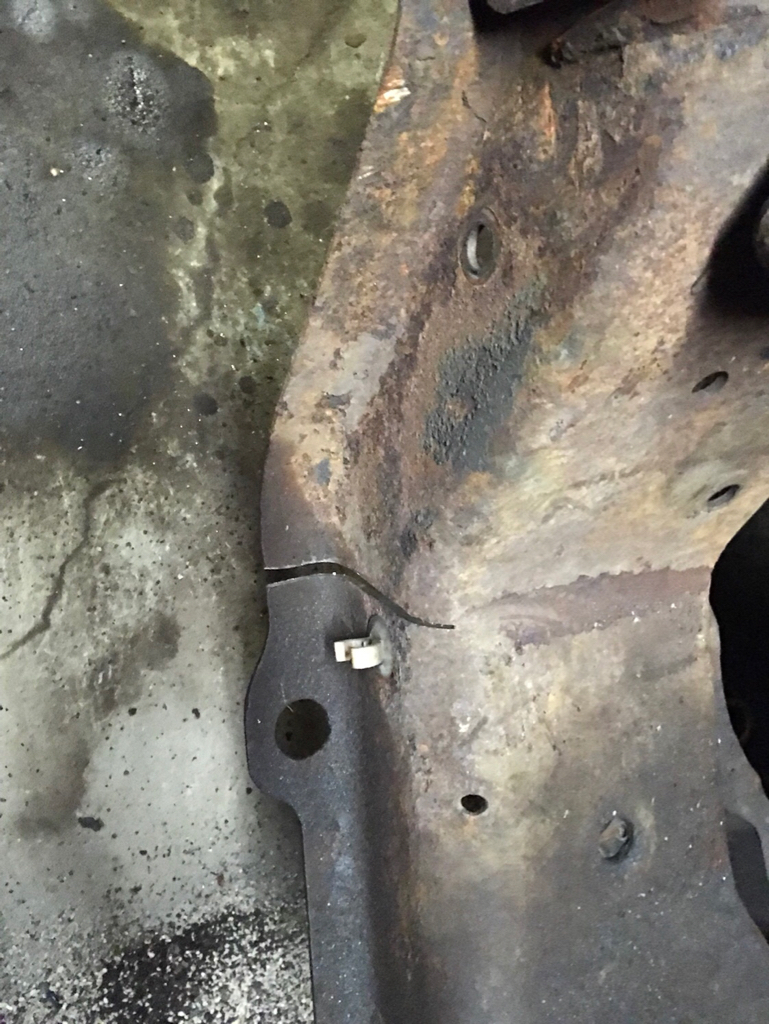 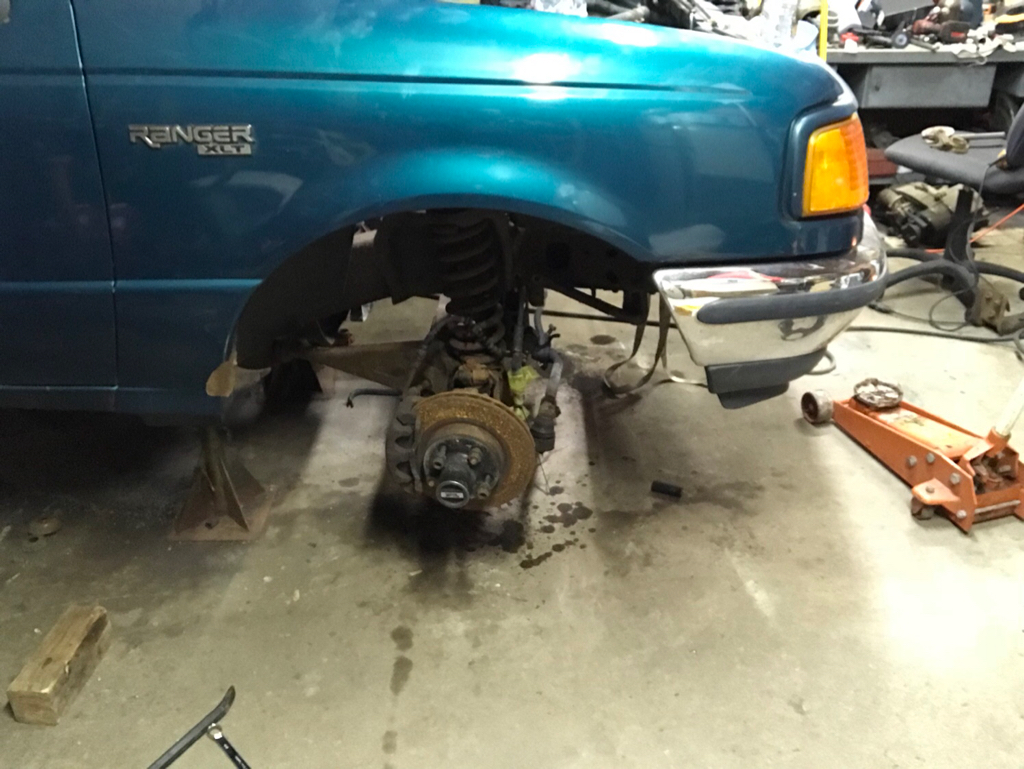 And back on its own weight. 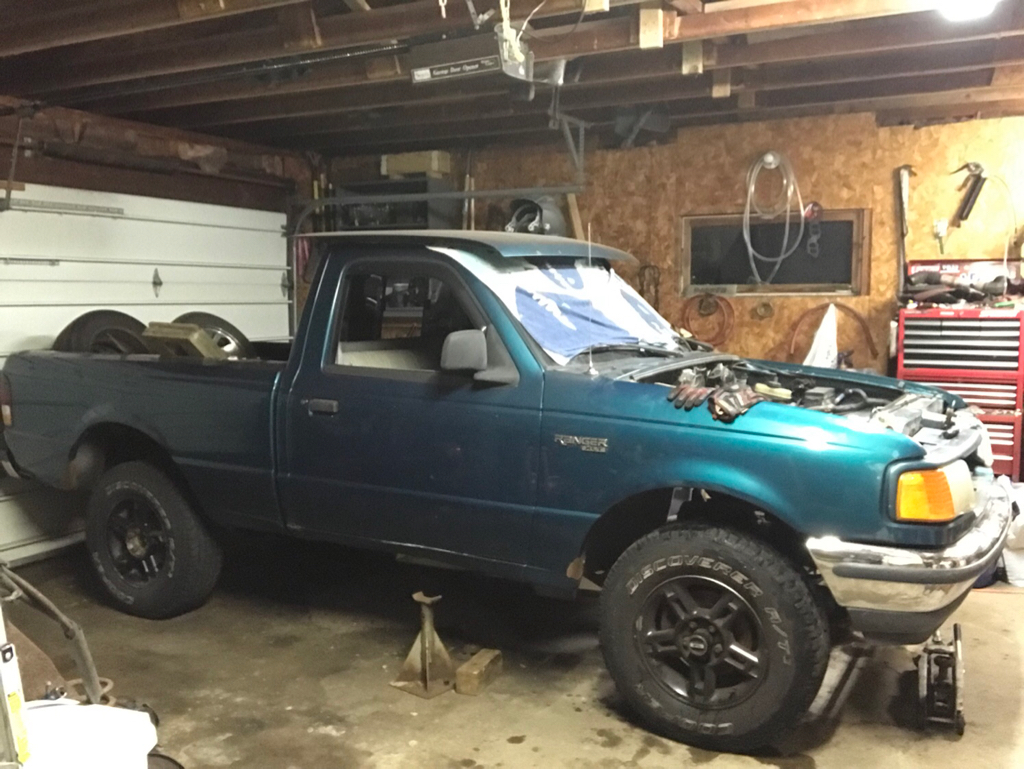 And that pretty much brings me to where I’m at now. I ran all new brake lines but have frozen bleeders in the drivers side and the lowered shocks were of course too short. Waiting to figure out how I want to level it before I buy shocks.

Nevermind, I figured it out.

Thanks man. I wanted to take the time to clean and paint everything but my wife had other plans. If the engine ever comes back out, I’ll take the time to do it then. Every time I look at pics of your truck from your build thread, I get jealous of how clean everything is lol

Got the tires switched over from (what was left of) the lead balancing weights to air soft bb’s today. Truck had a slight pull to the left and the drivers front tire had some positive camber. Quick adjustment of the eccentric and camber is now 0 and the pull is gone. Checked toe out of curiosity and it’s dead nuts at 1/8” out. Figure that’s good enough for now. Not sure what spec is.

It’ll run 85 down the highway smooth as glass. Kind of surprised me as I shortened the rear driveshaft with a 4” angle grinder and a cut off wheel. Lined it back up with a metric tape measure before I burned it back together. ?


Sent from my iPhone using Tapatalk
Last edited: May 7, 2018

Hopefully get out in the garage today to work on shimming the cab. I thought the body mounts were toast but looking back at old photos of the truck, the body lines never matched. It was wrecked bad enough early on at one point for a new bedside to be put on so that may be something to do with it.

I cut some 3/8” thick stainless washers and some hard durometer rubber “washers” at work to shim it. We’ll see what comes of it.

Never did get around to monkeying with the body mounts. I’m going to order new body mount bushings from James Duff this summer. Gotta take it easy on working on the truck for a little while before my wife strangles me.

I did however make it to the junkyard today and scored a factory tach gauge cluster as well as a 4wd speedo cable and most of the push button 4x4 electronics. Need to go back for the dash harness and I shouldn’t have to crawl under the truck to put it in 4wd anymore. That’s all for this weekend.

Cab is back up where it’s supposed to be. Body mount bushings are still in pretty good shape. It took the full half inch to get it right. I’ll have to shim the bed up .06 to .125 to get it perfect but I really don’t care. Only three of the six cab bolts were actually tight anymore. Rust got the best of those. Replaced everything with 1/2” grade 8. 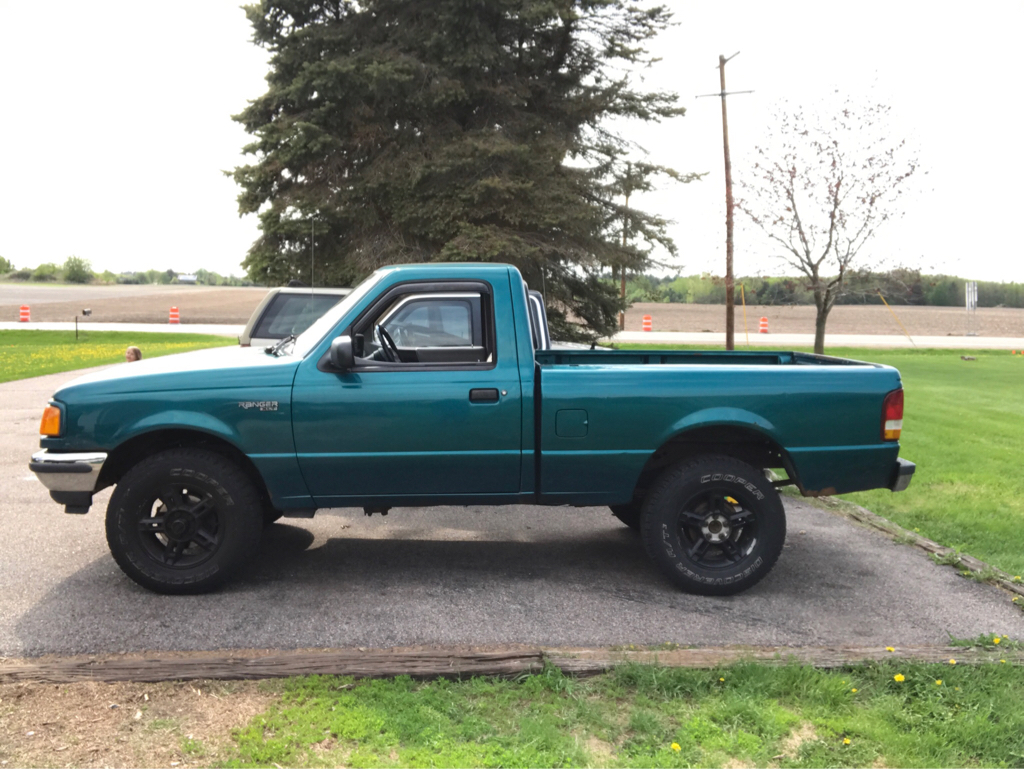 Any tricks with the Explorer wheels or did they just go one without issue?

Any tricks with the Explorer wheels or did they just go one without issue?
Click to expand...

They could use some spacers but otherwise they fit right on. I’ll most likely ditch them in the fall for some steelies and bigger tires. Debating on going back to 15’s or staying with 16’s. Tires are quite a bit cheaper for 16’s but not as many options for a mud tire.